The reason I move it to 1 percent and not 0 percent is people like Michael Bloomberg. Bloomberg announced in March that he would not run for president, but on Friday, he is expected to file paperwork to become a candidate in the Democratic primary in Alabama, as today is the state’s filing deadline. This move doesn’t mean Bloomberg is definitely running, however. At this point he’s just keeping his options open, although Bloomberg advisers told The New York Times on Thursday that he would decide for sure whether to run within a matter of days, not weeks.

Even so, Bloomberg’s move is a big surprise given just how late it is in the electoral calendar. (Since 1976, the latest an eventual nominee has launched his or her presidential campaign was August of the year before the election.) Now there are fewer than three months before the Iowa caucuses, and if Bloomberg does end up running, he’ll have to scramble to make the debate stage, let alone get himself in a position to win any states.

The reason, though, why Bloomberg is considering a last-minute bid is that he is reportedly worried about the way the Democratic primary is unfolding, as one adviser told the Times. Back in March, Bloomberg said he believed that it was essential that the Democratic nominee be able to defeat President Trump, and last month it was reported that he would reconsider his decision not to run if former Vice President Joe Biden continued to struggle. Presumably, Bloomberg has now changed his mind after seeing Sen. Elizabeth Warren — whose ideas, especially the wealth tax, he has lambasted as socialism — gain ground in the polls and Biden struggle with fundraising.

But there is arguably very little appetite among Democratic voters — donors may be a different story — for yet another presidential candidate. In October, a YouGov/HuffPost poll found that 83 percent of Democratic or Democratic-leaning voters were either enthusiastic or satisfied with their presidential choices. And it looks like there is even less appetite for Bloomberg specifically. According to last week’s Fox News poll, just 6 percent of likely Democratic primary voters said they would definitely vote for Bloomberg should he enter the race. And a hypothetical Harvard-Harris Poll of Hillary Clinton, John Kerry and Bloomberg mixed in with the rest of the Democratic field gave Bloomberg the same 6 percent of the vote.

And those polls would probably qualify as good news for Bloomberg, given that he was generally registering around 2 or 3 percent in national primary polls before first taking his name out of consideration in March (which is also when pollsters largely stopped asking about him). 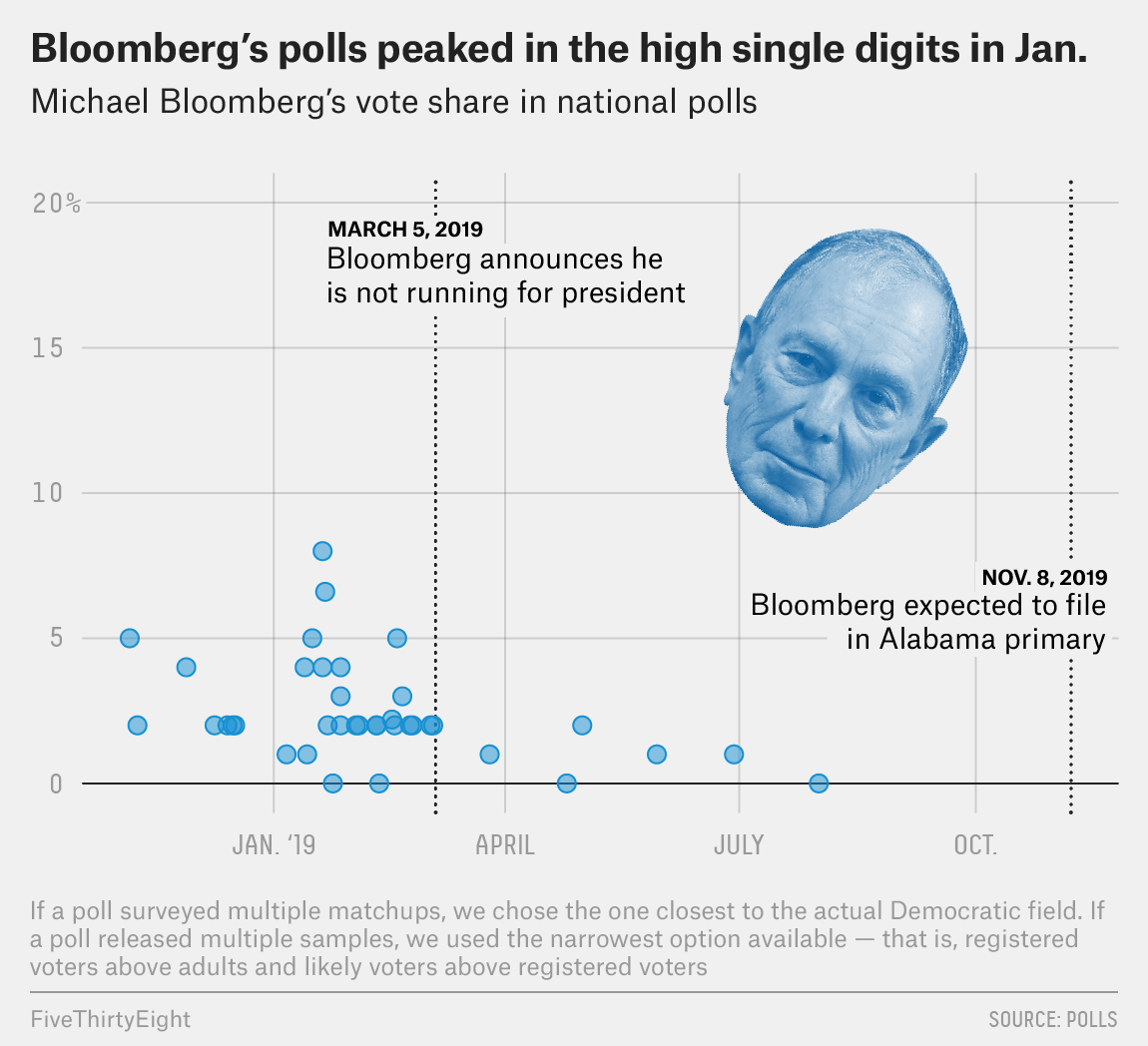 In a field this crowded, entering the race in the high single digits wouldn’t even necessarily be a bad thing, but the problem is that it might be harder for Bloomberg to build on that support than it would be for other candidates. In an average of polls from January and early February, I found that 62 percent of Democrats knew enough about Bloomberg to form an opinion (which was pretty high), but his net favorability (favorable rating minus unfavorable rating) was only +11 (which was pretty low). As you can see in the chart below, Bloomberg was a real outlier — for as well known as he is, we would have expected him to be much better-liked, with a net favorability of about +35, not +11. 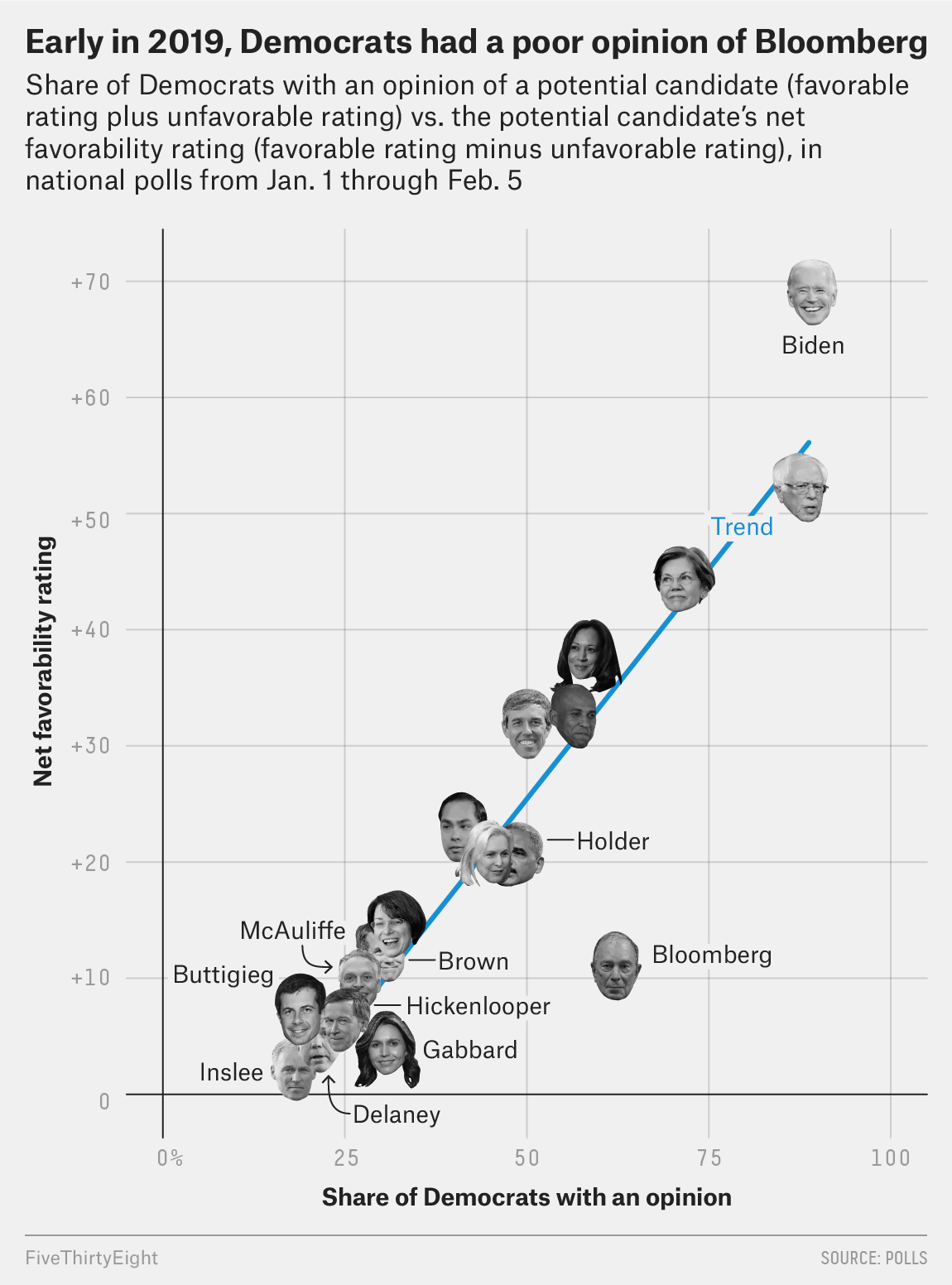 And history suggests Bloomberg’s low favorability ratings would be a major obstacle to winning the nomination. Our past research indicates that people who win presidential primaries tend to either be (a) already well known and well liked or (b) relative unknowns to start off the campaign. Only one nominee since at least 1980 has been in Bloomberg’s position (well known but not well liked), and that’s Trump himself.

Assuming Bloomberg does decide to run, where would he fit into the race? Well, as the former Republican-turned-independent mayor of New York City (he reregistered as a Democrat last year), he would be running as a moderate alternative in the Democratic primary. He favors liberal but not progressive solutions to issues like health care and climate change, and he can be downright libertarian on fiscal issues, like the regulation of banks and, of course, taxes. (It’s little wonder that he has denounced Warren for years.) That said, he has become a progressive leader on the issue of gun control, founding and investing millions in the group Everytown for Gun Safety, which has emerged as a powerful political counterweight to the National Rifle Association. Unfortunately for Bloomberg, though, candidates from the more moderate end of the party (other than Biden) have struggled to gain traction in the polls, so there’s a real question of how much support he can reasonably expect to attract. His candidacy may depend on eating into Biden’s support (which, ironically, could make it likelier that someone like Warren wins the nomination).

Thanks to his successful financial services and media company, Bloomberg will at least have money at his disposal (he has a net worth of $52 billion) to help him overcome his late start. It’s not hard to imagine Bloomberg doing what fellow billionaire-turned-presidential-candidate Tom Steyer has done — use his own money to saturate the early states with advertising and augment his state-level polling numbers just enough to qualify for the debates. However, as we noted when Steyer entered the race, wealthy self-funders don’t actually have an electoral advantage. For example, in 2018, we found that self-funders1 in congressional and gubernatorial races won Democratic primaries at about the same rate as non-self-funders did. And getting 4 percent in four individual polls (the polling threshold for the December debate) is a far cry from being in legitimate contention to win the nomination.

Instead, it seems likelier that Bloomberg will affect the race primarily because of the effect he will have on other candidates. For example, he could cause Biden to slip in the polls by chipping away at his moderate base or throw cold water on the ascent of South Bend, Indiana, Mayor Pete Buttigieg. He could also turn voters away from Warren or Sen. Bernie Sanders by becoming the designated attack dog against progressive policies. Or he could fail to make much of an impact at all, leaving the current state of the race unchanged. We’re getting ahead of ourselves, though; it’s still possible he won’t run at all. Either way, there’s a long way to go before Bloomberg is a factor in this race.