Minnesota Timberwolves swingman Andrew Wiggins has been one of the most confounding NBA players of the late 2010s. Despite being pegged as a superstar out of high school, going first in the 2014 draft and winning Rookie of the Year honors in 2015, Wiggins was largely seen as a disappointment over his first five pro seasons — particularly given the max contract extension he signed in 2017. After arguably the worst season of his career in 2018-19, it appeared that Wiggins’s chance at superstardom — which once seemed guaranteed — had basically passed him by.

But something has clicked with Wiggins in this, his sixth NBA season. Over the Wolves’ first 11 games, he has come out like a man on a mission to reclaim his former promise. He’s averaging nearly 26 points per game (including scoring 30 or more in four of his past five contests) to go with career-best numbers in assists per game, rebounds per game and true shooting percentage. Still just 24 years old, is Wiggins figuring things out? Can he finally deliver on his long-dormant potential?

Certainly, this is the best Wiggins has played in a very long time. To help ballpark a player’s performance in any given game, I created a Game Score-like box score estimate of points added above replacement via RAPTOR — our new player-value metric — which I’m calling the RAPTOR Game Score, or RAGS.1 Over the past five games, Wiggins has averaged a RAGS of 10.7 points above replacement, which is the most he’s had in any five-game stretch since February 2017, nearly three full seasons ago: 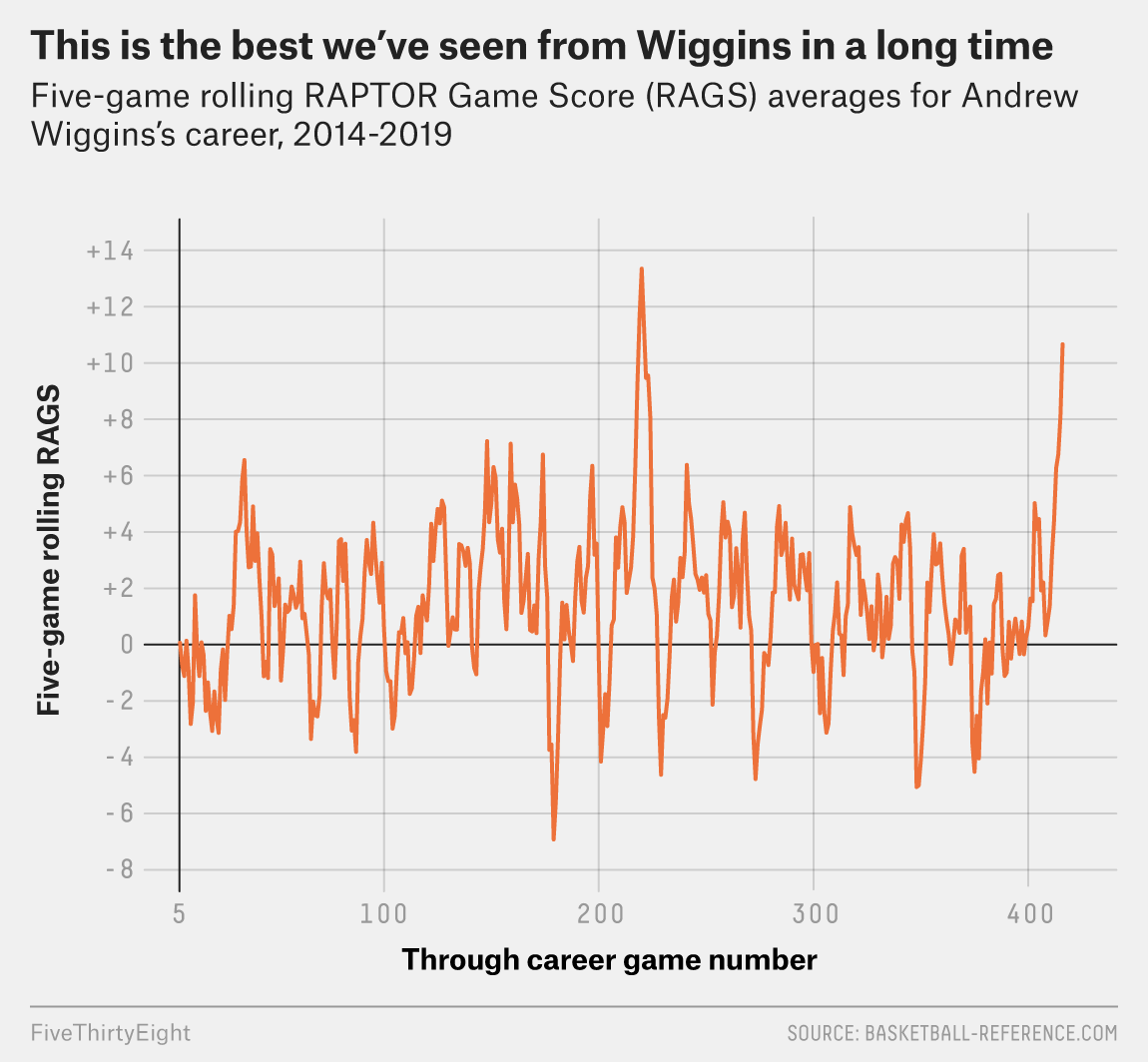 For a little perspective, at no point last year did Wiggins average a five-game RAGS any better than 5.0. So this has already been a remarkable start to the season for him.

The seasonlong numbers bear out Wiggins’s rapid improvement as well. Going into the year, our projection system thought Wiggins would be worth -0.3 points above average per 100 possessions. While that was better than how many other advanced stats regarded him — in Box Plus/Minus, for instance, Wiggins was worth -2.9 points per 100 last season relative to average — it was still quite a bit lower than the career-best +1.9 RAPTOR level (including +5.0 on offense) Wiggins has actually played at to start the season.

One of the key ingredients in Wiggins’s resurgence has been a dramatic uptick in scoring efficiency despite a concurrent increase in usage rate, which doesn’t usually happen. A year after letting his true shooting percentage dip below 50 percent for the first time in his career, Wiggins is now up to a career-high 56.3 mark, to go with a usage of 28.3 percent — 3.9 points higher than last year — as well. He has connected for career-best shooting percentages on both 2-pointers (53.2) and 3-pointers (36.1), despite being assisted on the lowest share of made baskets in his career to date, per data from Cleaning the Glass.

This mix of volume and efficiency is rare. Wiggins is one of only 17 players this season with a true shooting percentage of at least 56 percent and a usage rate of at least 28 percent — joining an elite offensive list with names like James Harden, Giannis Antetokounmpo and Damian Lillard on it. And it bears mentioning that, at 6.3 percent, Wiggins also has the lowest turnover rate of anybody on that list.

Since he’s starting to shoot more from higher-value areas of the court, it makes sense that Wiggins would be a more efficient offensive player this season. But he has also benefited from some trends that may prove unsustainable over the course of the season. According to tracking data from Second Spectrum, Wiggins has taken shots with an expected effective field-goal percentage of 47.7 percent so far this season. That’s still well below the league median (among players with at least 50 shot attempts) of 51.7 percent, but Wiggins has made up for it by shooting an effective field-goal percentage 5.8 points better than we’d expect from shot quality alone. Plenty of star players thrive by making tough shots — Kevin Durant comes to mind — so maybe Wiggins can keep that up … but we’ve also found that shot-making is a highly variable stat from game to game and even season to season. For instance, last year Wiggins shot an effective field-goal percentage 1.4 points below expected after accounting for shot difficulty, according to Second Spectrum.

In truth, Wiggins probably won’t be this good going forward, though he was also never as bad as he appeared to be last season. His Predictive RAPTOR (what we call “PREDATOR”), which is a version that regresses down statistical components known to be noisy in a small sample, has been +0.4 to start the 2019-20 season, somewhat lower than the +1.9 standard RAPTOR that gives players credit for performances even if they might be driven more by luck than skill. Last season, by contrast, Wiggins’s PREDATOR (-1.1) was higher than his regular RAPTOR (-2.0), indicating that luck was working against him.

After stripping away the luckier aspects of Wiggins’s season to date, he still looks like a markedly better offensive player so far than at any other point in his career. This also makes sense: Our projections have consistently compared Wiggins to current Spurs veterans DeMar DeRozan and Rudy Gay2 when they were the same age, and both of them easily set career-best RAPTOR marks (to that point in their careers) in their age-24 seasons — just like Wiggins is doing now.

But of course, as we’ve written about before, there’s always a catch with Wiggins. Even in a breakout season, his offensive PREDATOR ranks only 53rd among players with at least 150 minutes played, putting Wiggins at roughly the same level as Will Barton and Buddy Hield. Why? Despite the improved scoring, his shot selection inherently limits his ceiling, and even with an improved assist rate, he still doesn’t pass enough (or draw enough fouls) to enhance his offensive value much otherwise. And then there’s defense, where Wiggins still ranks as decidedly subpar. According to defensive PREDATOR, he sits 188th out of 252 players with at least 150 minutes this season — and again, that’s after filtering out the inherent bad luck in things like his -11.4 on-versus-off defensive plus/minus per 100 possessions.

At his best, Wiggins is showing that he can be a valuable scorer and an offensive complement to teammate Karl-Anthony Towns, who is also having an amazing season (+9.9 RAPTOR) so far. Wiggins will provide some really nice highlights and could even be part of a playoff run for Minnesota. (We give the Wolves a 79 percent chance of getting back to the postseason for the second time in three years — or the third time in 17 years, depending on how you look at it.) But Wiggins is also a very particular kind of polarizing player, about whom the eye test and many different kinds of numbers can never quite agree. That debate didn’t really matter when he was playing poorly by all accounts, but it’s probably going to resurface now that Wiggins is hot again and finally realizing some of his old potential.