Are voters rational? Well, depending on the academic research you read, they’re either irrational, quasi-rational or rational. Of course, what makes a rational voter is a question unto itself.

Let me suggest a different way to assess rationality: people voting for the party they trust more on the issue that is most important to them. So, if you’re an environmentalist who trusts Democrats more than Republicans on the environment but vote for the GOP, you’re irrational. If your pet issue is immigration reform, and you have more faith in Republicans on that issue, and you vote Republican — you’re rational.

By this simple (if imperfect) definition, voters have been pretty rational. This dynamic also points to a small Republican advantage in the national environment for 2014.

In 13 midterm elections since 1946, Gallup asked voters within two months of each election, “Which political party do you think can do a better job of handling the problem you think is most important — the Republican Party or the Democratic Party?” Here’s the presidential party’s advantage (or disadvantage) on that question compared with the aggregate vote in House races: 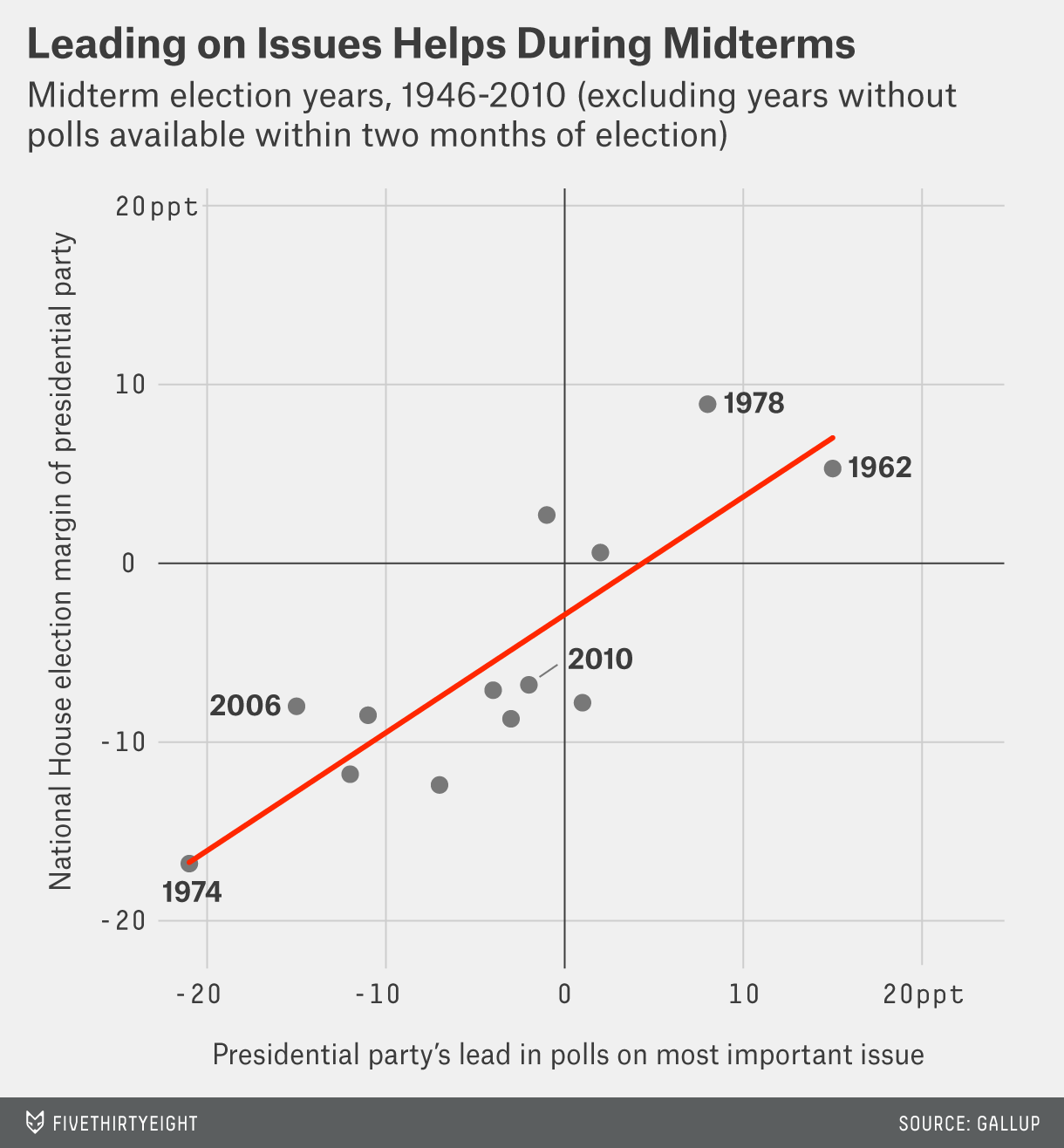 As expected, the president’s party tends to do worse when voters no longer trust it on their most important issue. In 2010, Democrats were down 2 percentage points on the trust measure, predicting a loss on the national House vote by about 4 points. In reality, Democrats lost by a little under 7 points. That’s close, but the question doesn’t perfectly predict the national House vote — it tends to overestimate how well the president’s party will do. That’s why the Republicans’ 2-point edge in 2010 predicted a 4-point victory. The average absolute error between the measure’s predicted margin and the actual margin is 3.3 points.

Right now, Democrats and Republicans are tied, according to this measure — each received 35 percent in Gallup’s latest poll. This suggests Republicans have a slight edge.

This question also helps unravel another apparent paradox: Polls show voters favor the Democratic position on “nearly everything,” including the minimum wage, the environment and same-sex marriage. But while Democrats may hold a lead on most issues, Americans consider few issues pressing. Voters prioritize.

It’s a simple math problem: Most issues can’t be most important. As Brendan Nyhan, a professor of government at Dartmouth College, has pointed out, asking which party Americans trust on a particular issue hasn’t had success in explaining past vote patterns in midterm elections.

There are currently only four issues listed as “most important” by at least 10 percent of Americans: general dissatisfaction with government, the economy, jobs and immigration. On these issues, voters are fairly split per the latest polling. Some surveys show Democrats ahead, and some favor the GOP. For example, the most recent CBS News Poll found that more people thought Republicans would do a better job on the economy, and the most recent ABC News/Washington Post poll asked the same question but had Democrats ahead.

Will voters be rational this year? It seems so. If the current numbers on trust hold through the election, it would imply nearly a 3 percentage-point advantage for Republicans in the national House vote. That nearly matches the vote implied by congressional and presidential approval ratings. The generic ballot gives Democrats a 1-point edge, though, as I have pointed out, the generic ballot generally moves against the president’s party over an election year.

The most important issues question does not suggest that Republicans will have a huge wind at their back in 2014, but it matches other indicators showing the GOP will have a somewhat favorable environment. That could make a difference in close Senate races.