“Time heals all wounds” is kind of a nonsense saying when it comes to sports. If it were true, rivalries wouldn’t exist and 35-year-olds on the brink of retirement wouldn’t hang on for one last World Cup. More than half the likely starters on the U.S. and Japanese national teams in the Women’s World Cup final this Sunday were there for the agony and ecstacy — depending which team you were on — of the 2011 final game, when Japan defeated the U.S. on penalty kicks. Japan now has a chance to repeat history, and join Germany and the U.S. as the only countries to win two World Cup titles. The U.S. is looking to break its 16-year World Cup drought and secure its place in history as the greatest World Cup dynasty of all time (in either the women’s or men’s game).

This championship game might not be the greatest of all time, but it’s one with a lot of still-fresh wounds, so here’s a look at how it’s shaping up.

Things are more even than they seem

Back in 2011, some betting lines put Japan’s chances of beating the U.S. around 28 percent, not so far from where they are this time around. Coming off a huge semifinal win over Germany, FiveThirtyEight’s model says the Americans should win 67 percent of the time, but the two teams’ performances in this World Cup have been pretty similar. Both teams have created the same number of chances (59) and scored the same number of goals (nine), despite having traveled very different paths to the final.

It’s likely that goals won’t come easily for either side. The U.S. hasn’t been scored on since its opening game, and Japan has conceded only three goals in six games (one of which was an egregious keeper error). It may very well come down to who can capitalize on the few good opportunities the defense allows, and which team doesn’t miss early chances like the U.S. did in the 2011 final.

Japan is arguably the most technical team in the world; it has had the highest pass completion percentage of any team at the World Cup (80 percent compared to the Americans’ 74 percent) and its players have touched the ball and attempted almost 1.5 times as many passes as the U.S. players. Japan plays a quick, one-and-two-touch style of soccer that is different from the styles of most teams the U.S. has faced so far. The closest comparison is probably Colombia — and the U.S. struggled a bit to win the ball back in the midfield in that game.

Where the U.S. will excel against Japan is with its physicality and speed; by pressuring the defense and surprising Japan by playing the ball in behind. This is how the first U.S. goal came at the 2011 World Cup: The midfield collapsed to win the ball back, Megan Rapinoe played a long ball in behind, and Alex Morgan outran her defender and scored with just two touches. In the semifinal game against England this year, Japan struggled when the Lionesses pressured and stepped to win the ball back, and the U.S. must do the same thing if it hopes to break down Japan’s tremendous organization. The Americans are undoubtedly faster and stronger than Japan, but they’ll also need to be able to win the ball from a team that hardly loses it.

Slow and steady wins the race (at least for one team)

Both teams’ chances of winning didn’t change significantly throughout the tournament aside from a bump after the semifinal games; the U.S. hovered around 30 percent and Japan around 10 percent for the majority of the World Cup. Neither team looked stellar during the group stage — eyes were on Germany, France and even Brazil’s early dominance — but these are the two teams that have made it to the World Cup final. 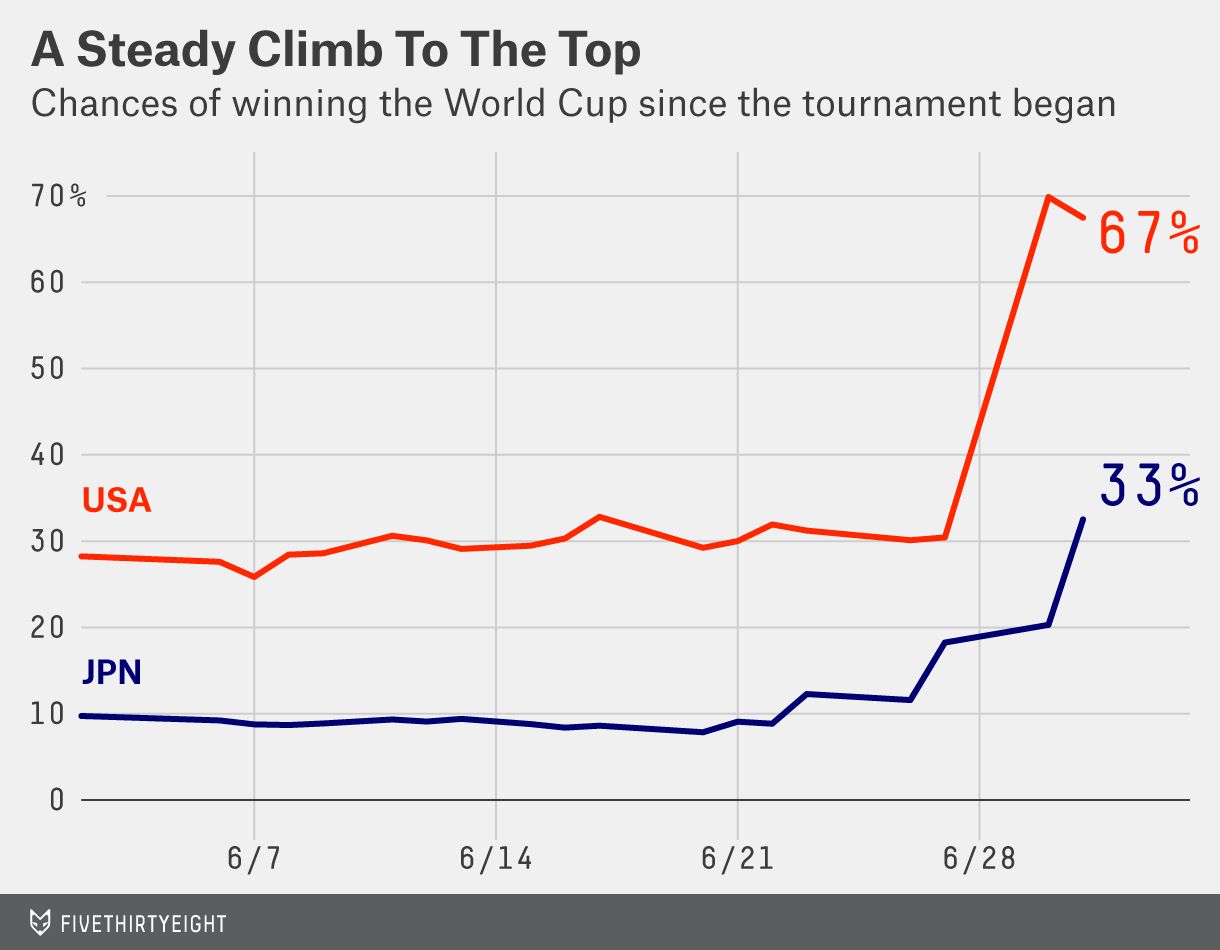 “These are two talented teams with a lot of history and rivalry, and I think it will be a classic matchup,” U.S. coach Jill Ellis said about Sunday’s final. The score in head-to-head matchups is one to one right now — one World cup victory for Japan to one Olympic gold medal for the U.S. — but everyone knows a World Cup trophy tastes sweeter than gold.