The U.S. and Germany are the only teams to have won the Women’s World Cup twice. So the United States’ 2-0 win over Germany in the World Cup semifinal on Tuesday night wasn’t only the most important game of this year’s tournament. It also helps to settle a score about which country has the greatest overall run of Women’s World Cup success.

The U.S. women now have a chance to win a third title in Sunday’s final game in Vancouver, British Columbia. But even if they should lose, they’ll have appeared in the World Cup final four times to Germany’s three. The Americans have also reached the semifinals in all seven Women’s World Cups, including this year’s, while Germany failed to do so in 1999 and 2011.

In fact, the seven-tournament run for the U.S. women looks a lot like the best such streaks from the men’s World Cup, which belong to Brazil and West Germany. And if the U.S. women win in Vancouver, they’ll be able to argue that their streak has been slightly more impressive.

We can be somewhat more precise about this, building a simple statistical system that places a lot of emphasis on winning it all. We’ll award a country four “dynasty points” if it wins the World Cup, two points if it’s the runner-up, and one point if it loses in the semifinal. (FIFA plays a third-place playoff between the two semifinal losers, but since many soccer fans ignore it, our system will too.) Then we’ll see which men’s and women’s teams accumulated the most dynasty points over consecutive tournaments.1 Here’s how the numbers shake out: 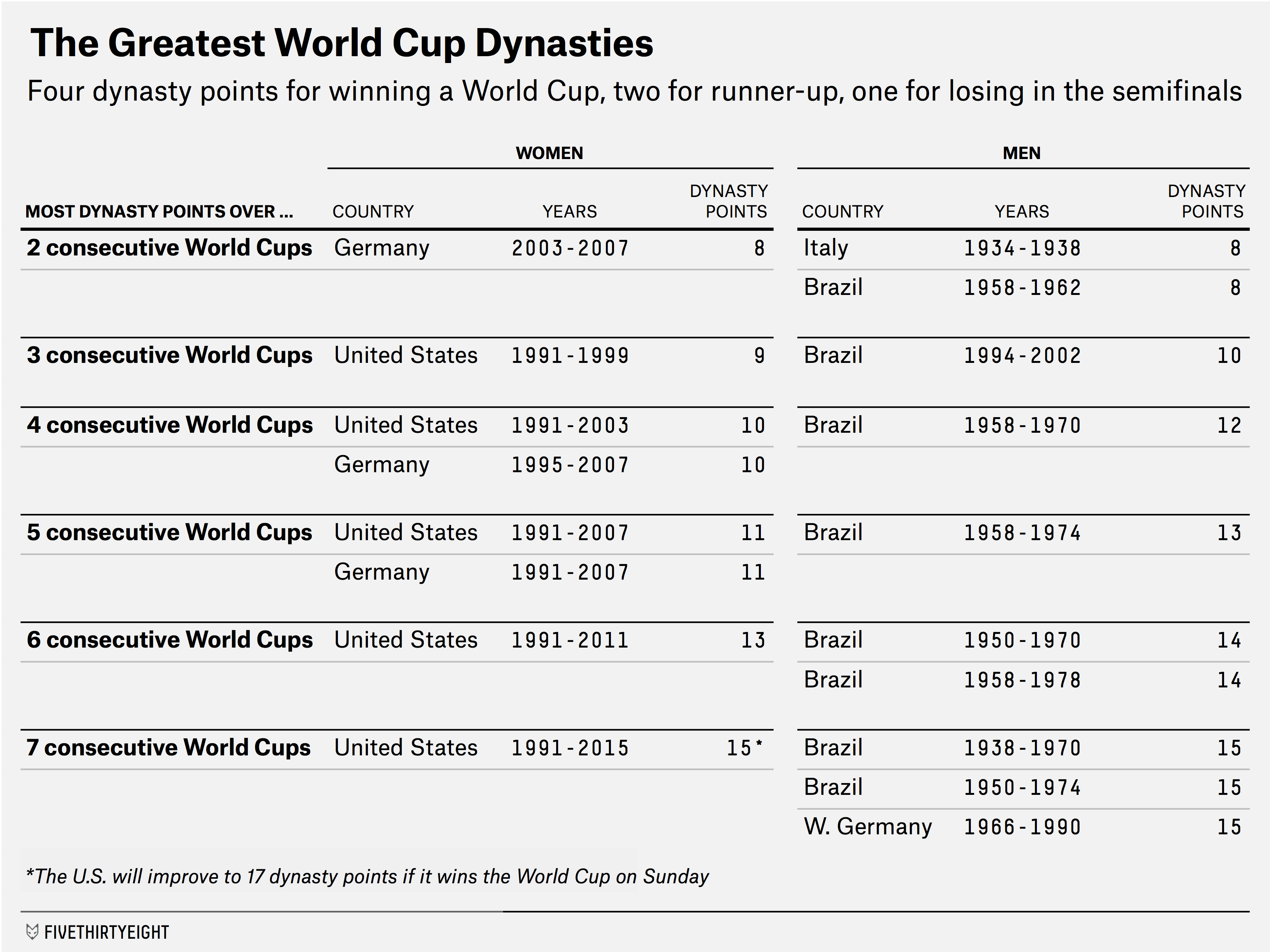 The best you can do over two consecutive World Cups, of course, is to win the tournaments back to back, which would give you eight dynasty points. Germany (in 2003 and 2007) is the only women’s team to have done that, although defending champs Japan will join them if they win this year’s tournament. The only men’s teams with back-to-back titles are Italy (in 1934 and 1938) and Brazil (in 1958 and 1962).

No men’s or women’s team has won three consecutive World Cups. The next-best accomplishment (worth 10 dynasty points) comes from winning two titles over the course of three tournaments and finishing as the runner-up in the third one. The Brazilian men did that, with championships in 1994 and 2002 bookending a second-place finish in 1998. The U.S. came closest on the women’s side, with wins in 1991 and 1999 and a third-place finish in 1995.

Brazil is the only country, men’s or women’s, to have won three World Cups in four tries, as its men’s team did from 1958 through 1970. The German women could have equaled that feat with a title this year, but Hope Solo, Carli Lloyd and Kelley O’Hara prevented that.

So if you’re looking at the best three- or four-tournament streaks, the Brazilian men are a bit ahead of what any women’s team has done.

The Women’s World Cup has been played only seven times, however. And the U.S. women have accumulated 15 dynasty points over those seven tournaments, matching the best total for men’s teams over seven-tournament periods, a record shared by three teams. Here’s each team’s record in slightly more detail:

As you can see, those are pretty similar résumés. Which streak you like best depends on how you weigh semifinals appearances, finals appearances and championships. Our dynasty points system happens to like each streak equally well.

If the U.S. women win on Sunday, however, bringing home their third World Cup in seven tries, they’ll pull narrowly ahead with 17 dynasty points. Brazil is the only men’s team with three titles over a seven-tournament stretch, and the U.S. women would rank slightly ahead of them by virtue of having appeared in seven semifinals to Brazil’s five. The U.S. women would have more championships and more semifinals appearances than the West German men from 1966 to 1990, meanwhile, outweighing West Germany’s higher number of finals appearances.

The argument is a little more complicated than this, of course. Since the men’s World Cup was staged 14 times before the women played their first one, the guys have had a lot more opportunities to pull successful streaks together, whether by virtue of luck or talent. On the other hand, women’s soccer is not as deep as the men’s game is, with the best teams tending to be more dominant in all competitions. But the U.S. women have been great however you cut the numbers.