Ukraine’s population declined by 6.3 million people, or 12 percent, between 1990 — the year before it gained independence from the Soviet Union — and 2012, the latest year for which the government has released estimates. And the United Nations projects the trend will continue: In the most likely scenario, Ukraine’s population will dip below 34 million in 2050, or less than two-thirds its population at independence. 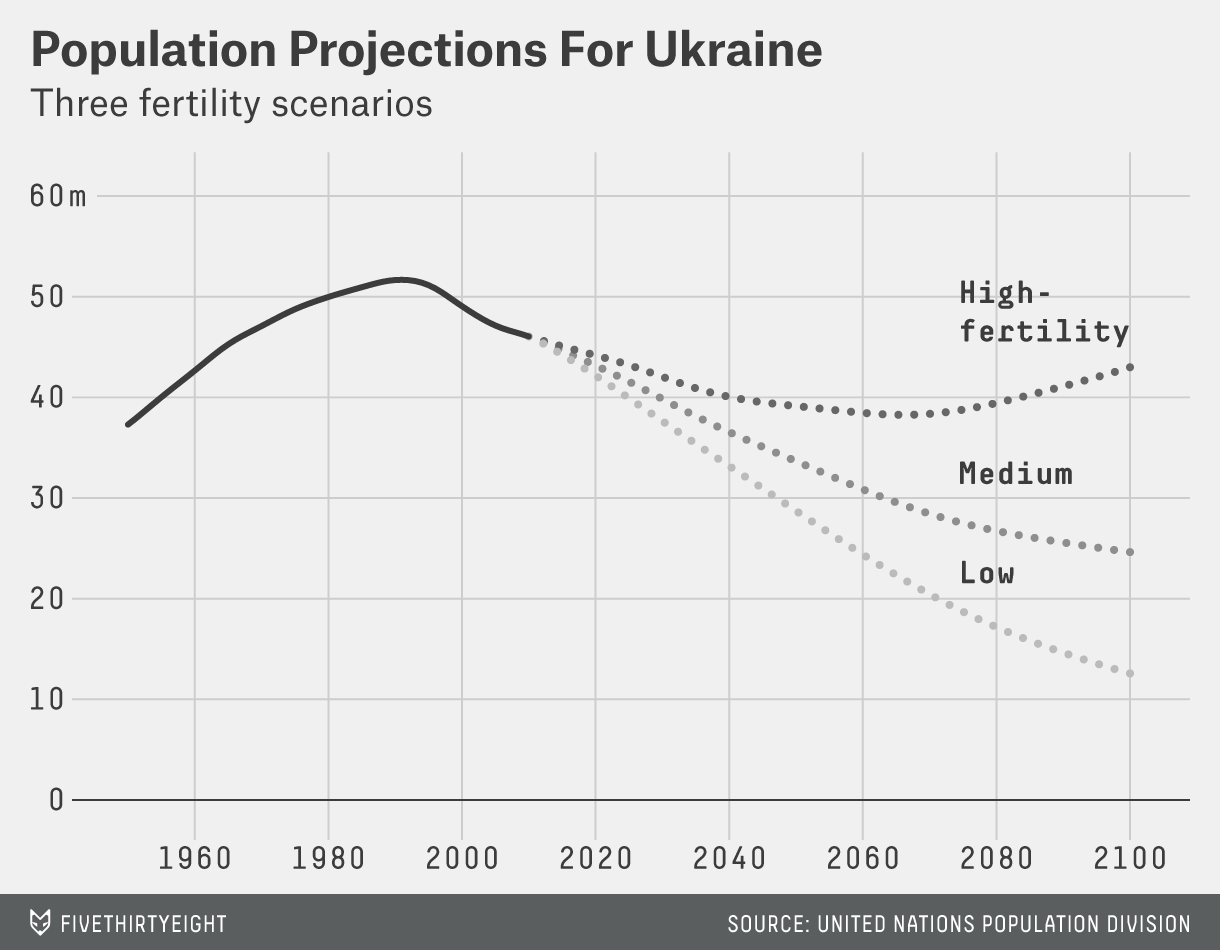 Four main factors drive population, and Ukraine is lagging in all of them. Births are well below replacement level. That has persisted long enough to age the population and drive down the proportion of women who are at the ages of peak fertility.1 Ukraine’s life expectancy is lower than in wealthier countries with low fertility, such as Germany and South Korea, so it needs more births than those countries do to compensate for deaths. And more people have moved out of Ukraine than have moved in, though net migration is balancing out.

In Ukraine, “Most women stop at one child mainly for economic reasons,” Oleh Wolowyna, a research fellow at the Center for Slavic, Eurasian and Eastern European Studies at the University of North Carolina at Chapel Hill, wrote in an email.

“Mortality is very high, especially among men, due to unhealthy life styles (mainly smoking and drinking) and a very deficient health-care system,” Wolowyna said. “The large outmigration is due to high unemployment and low wages.”

At one point, Ukraine was losing much of its population to migration: a net loss of more than two people per 1,000 population each year from 1994 to 2001, according to the U.S. Census Bureau’s International Program. During that period, more than a quarter of the country’s population loss resulted from people choosing to leave. Since then, though, outmigration has slowed to a trickle.

The official numbers may understate the extent to which migration is sapping Ukraine’s population, said Björn Schwentker, a data journalist who contributes to the media department of the Max Planck Institute for Demographic Research in Rostock, Germany. “There are probably many more people leaving the country than official numbers say,” Schwentker said, attributing the discrepancy to “political reasons.” The trend may have accelerated during the continuing turmoil that began with the overthrow of the government in February. 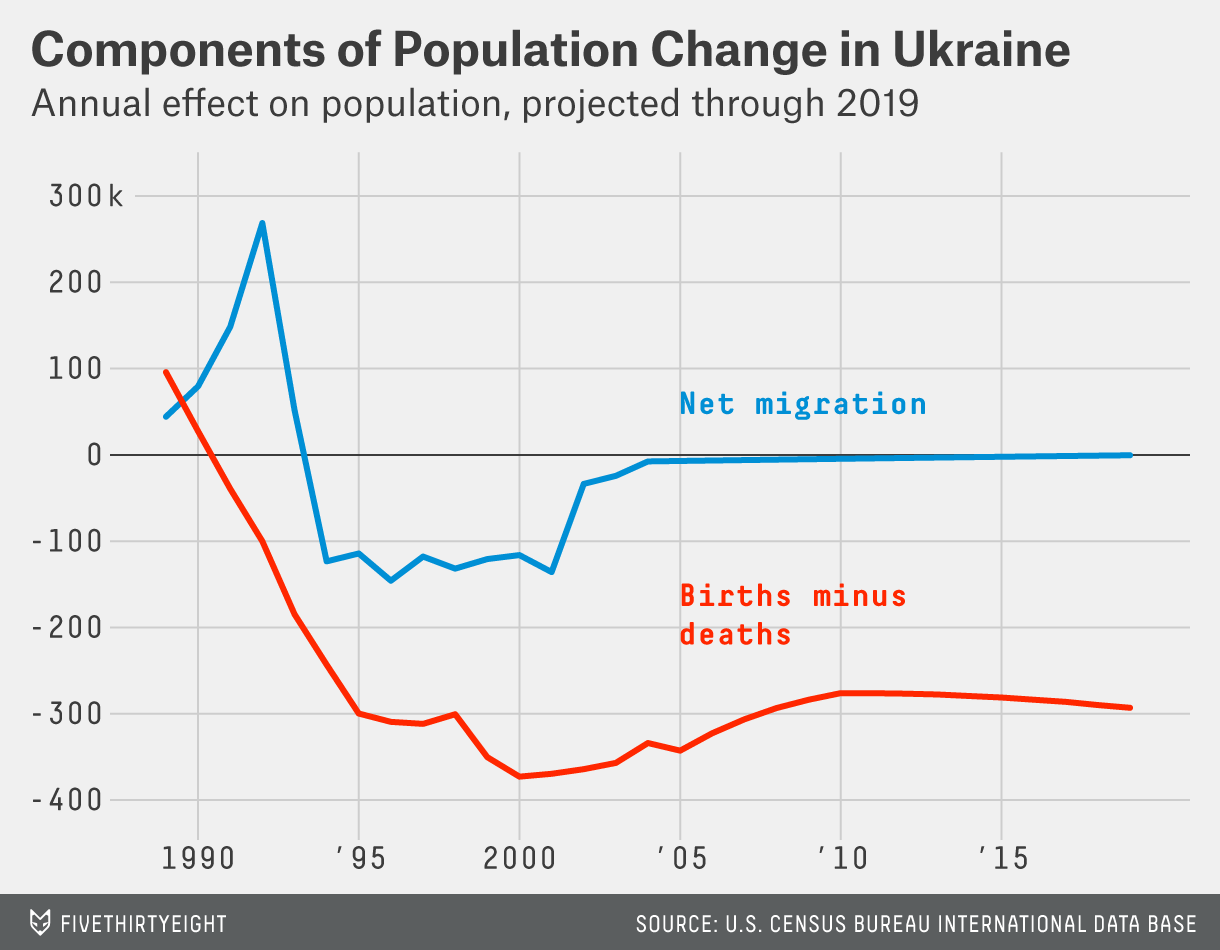 Even in the official numbers, provinces on Ukraine’s border with Russia see some of the biggest declines in population. Four of the five biggest decliners among the country’s 28 provinces and autonomous cities share a border with Russia.2 These regions also have low birth rates and high mortality, Schwentker said. Two of the four big decliners on the Russian border, Sumy and Chernihiv, have relatively few Russian-speakers and are more politically aligned with the West — another piece of evidence that demographic factors, more than migration, may be driving the population decline in the eastern part of Ukraine.

The regional variation shouldn’t be overstated: 27 of the country’s 28 regions lost population during the period, with Kiev the lone exception.

Ukraine’s population began declining in 1991, as birth rates fell “after the shock of the breakdown of the Soviet Union,” Schwentker said. Other former Soviet republics — Moldova, Latvia and Lithuania — also are among the fastest decliners.

But even before independence, Ukraine’s population was growing negligibly. Using any starting year from 1950 to 2009, its population growth to 20103 was among the 20 lowest of the more than 230 countries and territories tracked by the United Nations’ population division.4

Typically, countries need a Total Fertility Rate — roughly, a measure of how many children each woman has in her lifetime5 — of 2.1 to maintain their populations, not counting migration. From 2005 to 2010, Ukraine’s fertility rate was 1.4.

The U.N.’s latest projections include eight scenarios for Ukraine’s population out to 2100. Three are based on projections of future trends in fertility, mortality and migration: the low end of the range, the high end, and somewhere in between. In all three of these projections, Ukraine ranks among the 10 fastest-declining countries for each year from 2011 to 2100, compared to the starting year of 2010. The same is true for four of the other five less likely scenarios.6 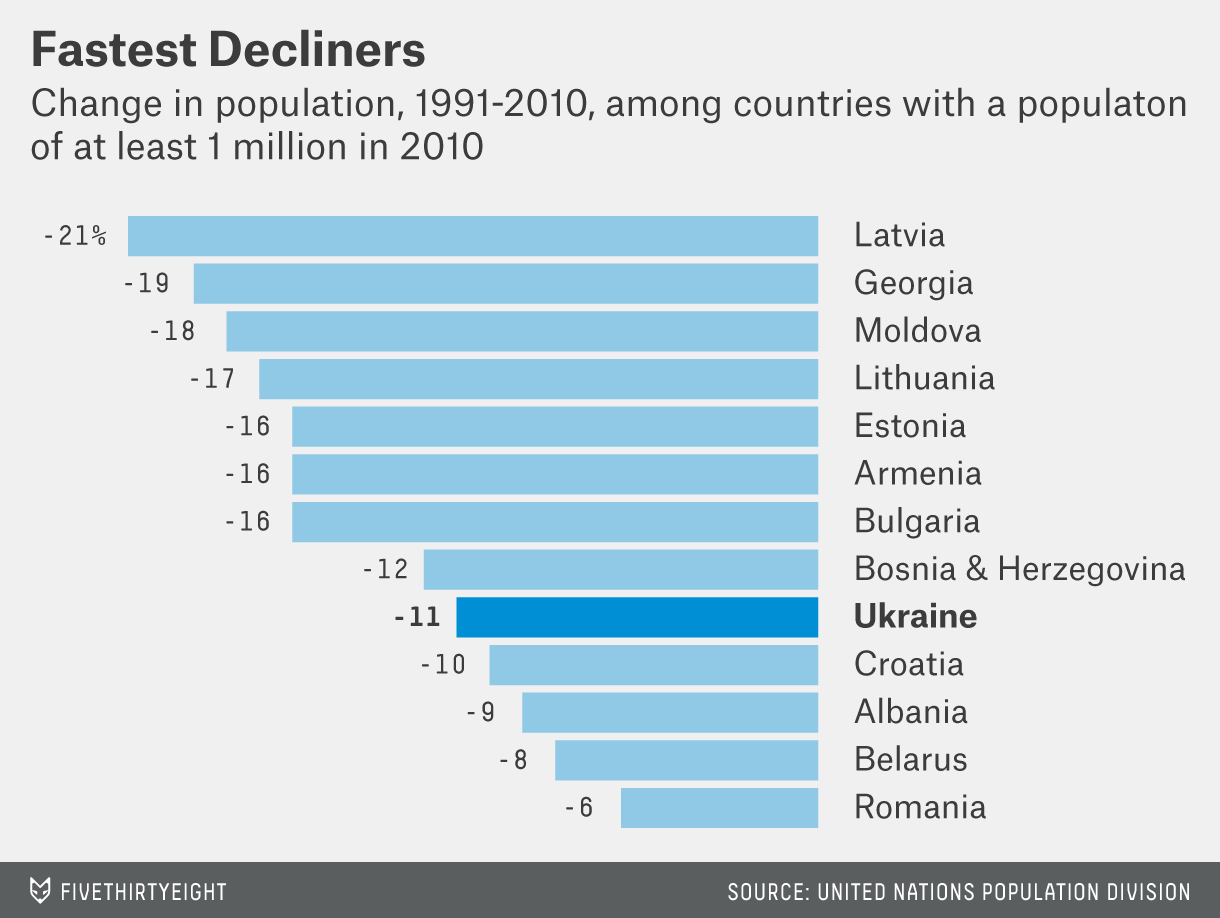 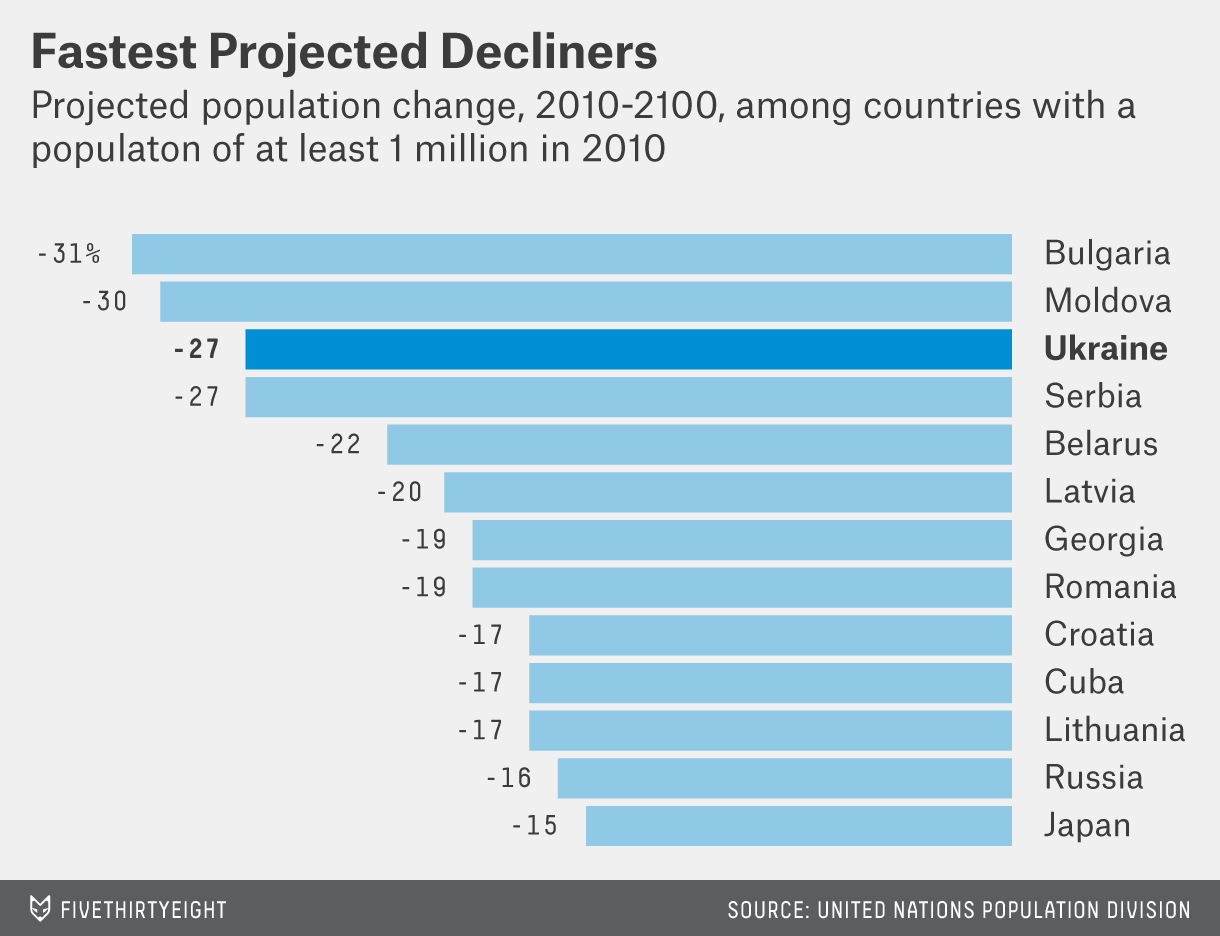 The history of such projections provides reason for skepticism about the scenarios for Ukraine. The U.S. Census Bureau, the other major population forecaster alongside the U.N., detected population declines in 30 countries or territories between 2000 and 2010, according to Thomas McDevitt, chief of the population studies branch in the Census Bureau’s population division. In 1998, the agency had predicted declines in just 11 of those places. Many of the other 19 places were former Soviet republics or small island territories.7

Migration is especially hard to project, subject as it is to policy changes and labor-market conditions, McDevitt said. “The closure of a canning factory, or closure of the garment industry, can make a major change in population,” he said in a telephone interview. “There is no crystal ball involved here. We’re constantly learning from our experience, really.”

And when it’s not sure, the Census Bureau plays it safe: For instance, in the absence of that crystal ball, it projects a net migration of exactly zero in Ukraine for every year from 2020 on.

Sebastian Klüsener, a researcher at the Max Planck Institute, said no projection can account for “unanticipated events such as the fall of the Iron Curtain, or war situations.” Even where there is good underlying data, “It is still very difficult to produce good projections.”

“I would not trust any population projection that aims to look beyond a time horizon of more than 20 years,” Klüsener said.

Last year, Ukrainian demographers painted a slightly more optimistic picture than the U.N. did, projecting a population of 36 million in 2050, not roughly 34 million.

Governments might be able to reverse population declines, perhaps with policies that offer incentives to people to have children. Carl Haub, a demographer at the Population Reference Bureau, said Russia’s financial rewards helped reverse a precipitous decline in fertility rates. It’s unclear how well these incentives work more broadly, Schwentker said. “The question is unanswered; research is still on.”

Even today’s figures are fuzzy, projections more than counts. That’s because Ukraine hasn’t conducted a census since 2001. “It would certainly be helpful to have another census soon,” Klüsener said. He also cited other challenges, such as the many Ukrainians who work seasonally in other countries and might be missed in counts or surveys.

The biggest short-term uncertainty about Ukraine’s population is whether Crimea’s population should still be included.

In March, most countries voted in the U.N. General Assembly to oppose recognizing Russia’s annexation. “My stance is, most people have not recognized that,” Haub said, “so we’ll just act like it didn’t happen.”

“When we did Ukraine in the last revision, Crimea was still part of it,” François Pelletier, chief of the U.N.’s population estimates and projections section, said in an email. “Before updating the next revision, we will look into this on how to proceed.”