Last month, residents of Crimea voted overwhelmingly for the autonomous province to leave Ukraine and join Russia. Electoral, polling, geographic and demographic data suggest that residents of two other Ukraine regions would be even more amenable than Crimeans were to exiting Ukraine.

The southeastern provinces, or oblasts, of Donetsk and Luhansk are more aligned with Russia than Crimea in almost every measurable way. Unlike Crimea, they share a land border with Russia, and their administrative centers are much closer to Russia than Crimea’s is. Their residents had a stronger desire to see Ukraine merge with Russia than Crimeans did, according to polls taken before Crimeans voted last month to join Russia. In the last two elections, voters in Donetsk and Luhansk threw even more support than Crimeans did to the major party that supports the closest ties with Russia. The sole ways in which Crimea is more tied to Russia: Slightly more Crimeans speak Russian as their native language, and significantly more identify themselves as Russian. Kharkiv, another oblast on the eastern border with Russia, ranks just behind Crimea in these pro-Russia factors. 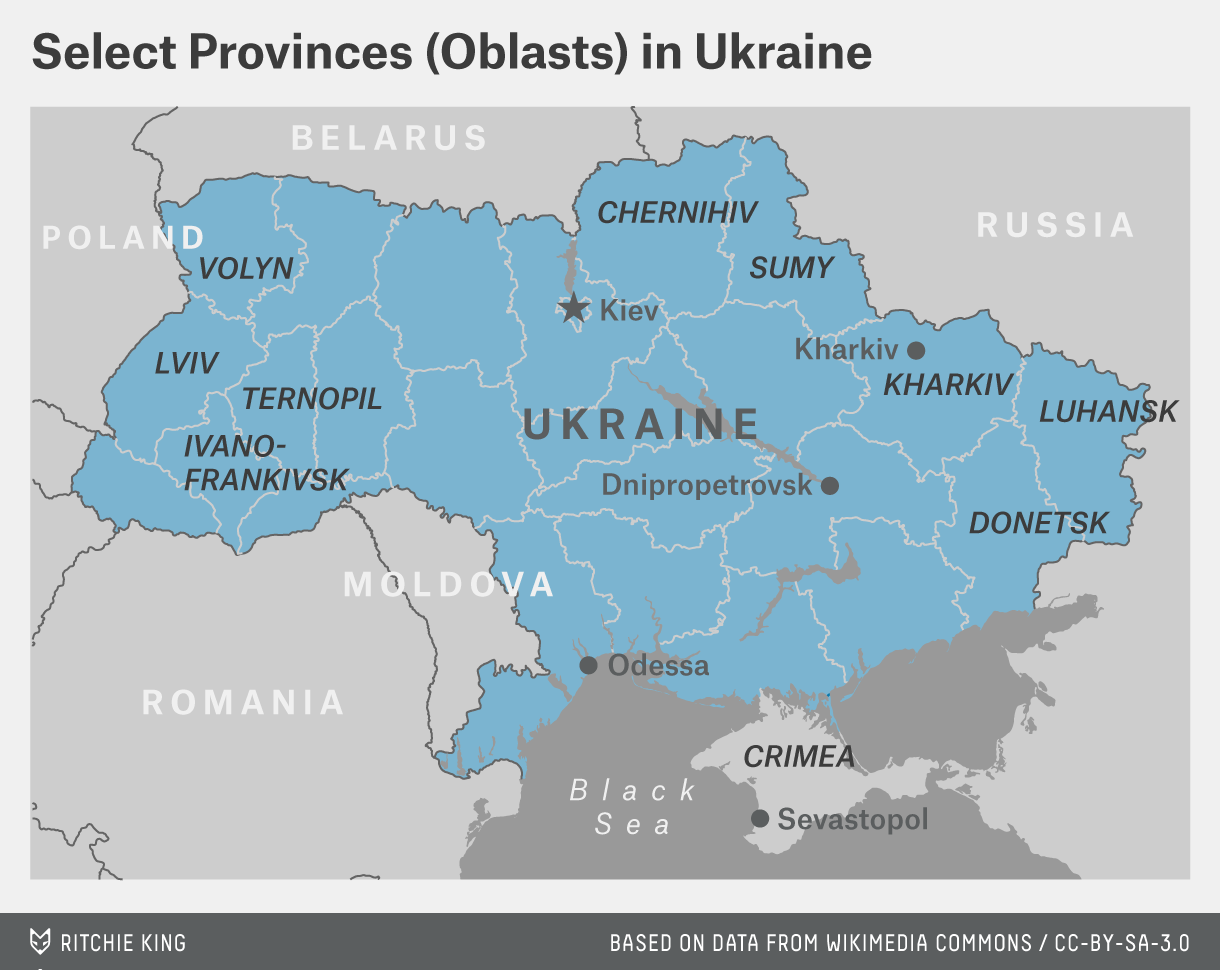 The data shows how stark the divide is among regions of Ukraine — and how that divide isn’t based solely on proximity to Russia. Two other oblasts that border Russia, Sumy and Chernihiv, have few Russians and have given more votes to the pro-Europe party than to the pro-Russia party in recent elections. Their disconnection from the three oblasts further south along Ukraine’s eastern border with Russia diminishes the correlation between distance from Russia and support for Russia.1 The same is true of the oblast of Odessa, home to Ukraine’s third-largest city, which is a 10-hour trip by car from Russia. Yet residents of the province favor merger and the pro-Russia party more than the national average.

Donetsk, Kharkiv and Luhansk all have seen unrest since Crimea voted to join Russia last month. Pro-Russia protesters in all three provinces have stormed government buildings. At a Donetsk airfield on Tuesday, Ukraine soldiers clashed with forces the Ukraine government described as terrorists. Overnight on Wednesday, Ukraine soldiers killed three militants who attacked a military base in the Donetsk city of Mariupol.

Should Donetsk and Luhansk exit Ukraine, it would be a boon to the Fatherland party, which narrowly lost the 2010 presidential elections and 2012 parliamentary race to the pro-Russia Party of Regions, or PR.2 The best hope for the electoral future of Fatherland, also known as All-Ukrainian Union, may be in a smaller but more fully Ukrainian union.

In the 2010 presidential race, PR candidate Viktor Yanukovych defeated Fatherland candidate Yulia Tymoshenko, 48.95 percent to 45.47 percent, an edge of nearly 900,000 votes. Subtract Crimea and Yanukovych would have won by fewer than 250,000 votes.

But the three pro-Russia regions that border Russia each contributed more to Yanukovych’s victory than Crimea did. In the 27 voting blocs other than Kharkiv — 23 other oblasts plus Crimea, overseas voters, and the cities of Kiev and Sevastopol, which have special status — Yanukovych won by merely 150,000 votes. Without Luhansk, meanwhile, Tymoshenko would have won by more than 240,000 votes. Donetsk had the biggest impact on the results: It had more voters than any other region by a wide margin — a lead of more than 800,000 over runner-up Dnipropetrovsk — and also the biggest pro-Yanukovych tilt. Outside of Donetsk, Tymoshenko won by nearly 1.4 million votes. Remove all three of the border regions and also Crimea from the final tally and Tymoshenko would have won by nearly 4 million votes.3 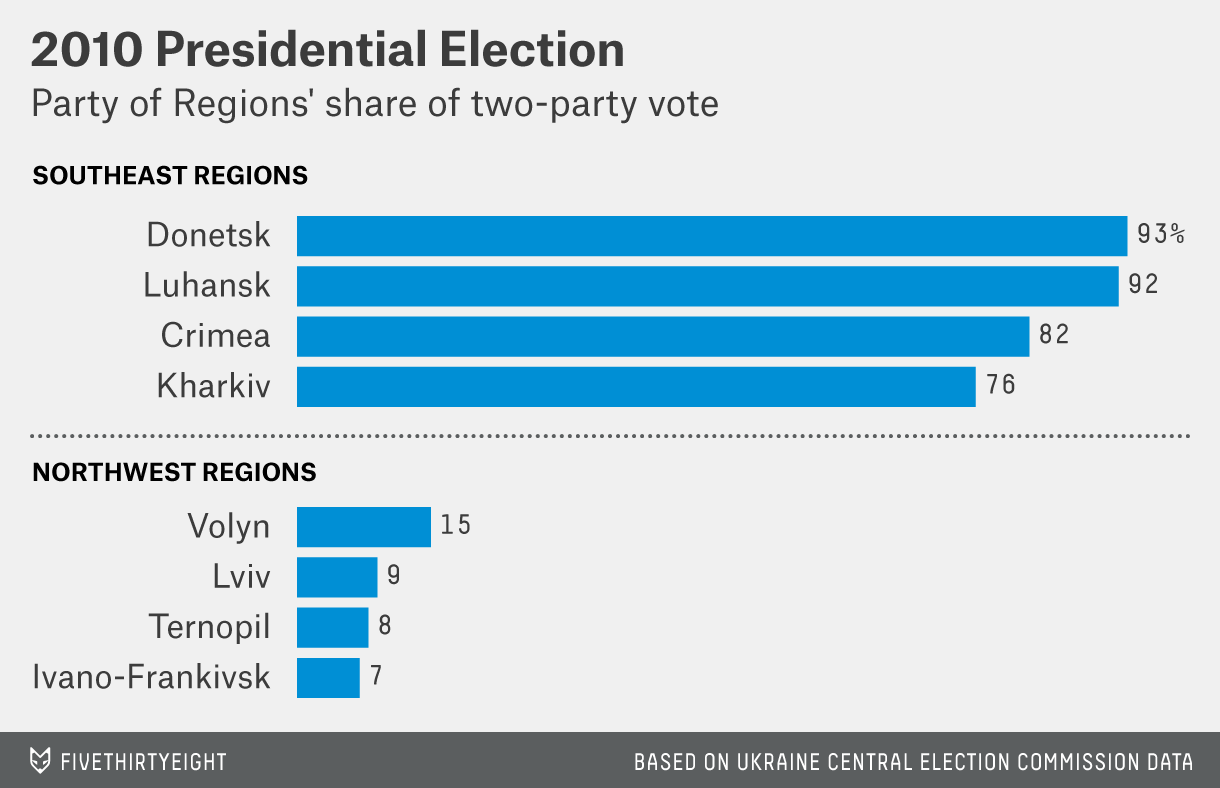 The story was similar in the 2012 parliamentary elections. PR beat Fatherland by more than 900,000 votes — a 4-percentage-point edge that translated into a rout of 187 seats to 102. Removing Crimea would have narrowed PR’s lead by nearly 300,000 votes. Removing Luhansk or Kharkiv would have made a bigger dent in the PR lead, and subtracting populous PR stronghold Donetsk would have won Fatherland the popular vote and brought it closer to control of the legislature.4 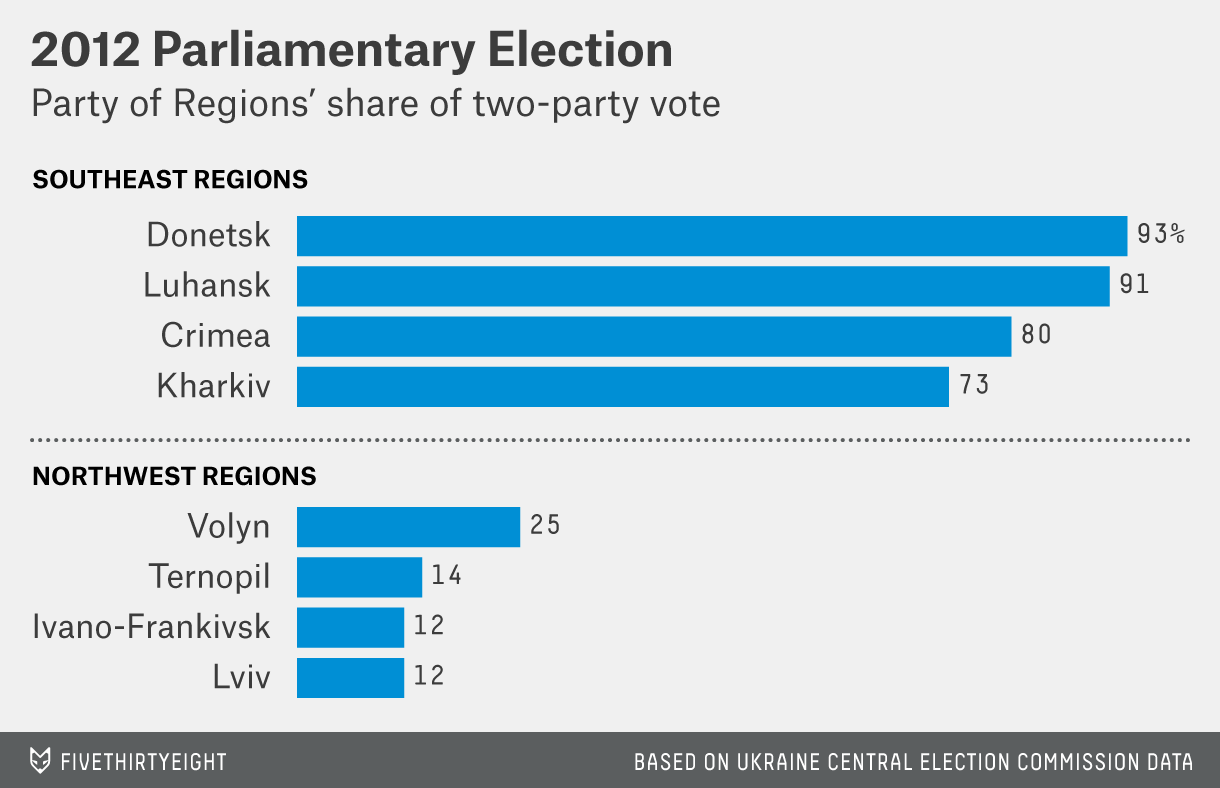 The pro-Russia regions have an entirely natural tie to Russia: They speak the same language. More than two-thirds of residents in Crimea, Donetsk and Luhansk listed Russian as their native tongue in 2001, the year of the most recent Ukraine census. Nearly half did in Kharkiv. Nationally, around 30 percent of Ukrainians did. 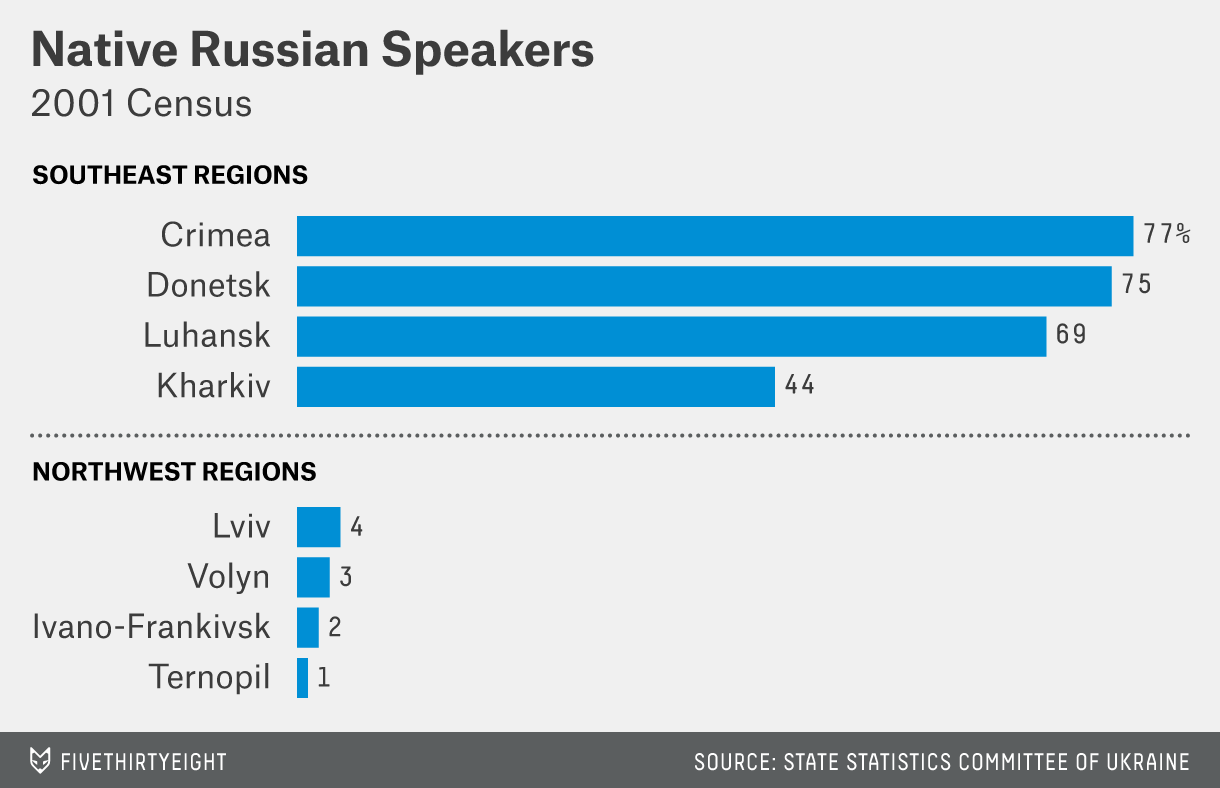 Until recent events, these strong linguistic, geographic and political ties to Russia didn’t translate into overwhelming support for merger with Russia. The Kiev International Institute of Sociology, at my request, shared its polling data by oblast from 2008 to 2014 on the question of what relations respondents would like Ukraine to have with Russia. In no region did even half of respondents, on average, choose, “Ukraine and Russia should merge into one state.” In Luhansk, the average level of support for merger was about two in five. In Donetsk and Crimea, it averaged about one-third of respondents. In Kharkiv, it was one in five. 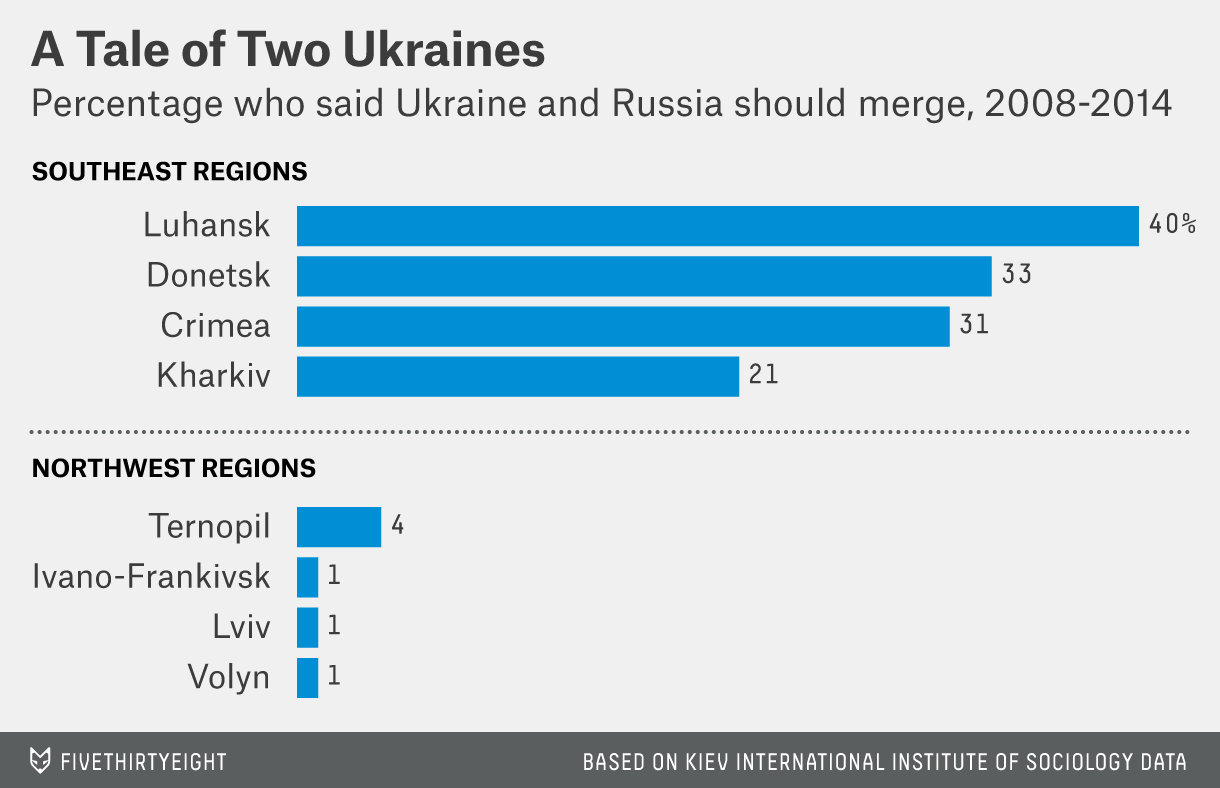 Yet those surveys were fielded before Yanukovych — who received his biggest backing from the pro-Russia regions — fled the country in the face of an uprising against his decision to pivot away from the European Union. Faced with the choice of remaining part of a country ruled by a pro-EU government, 97 percent of Crimeans voted in favor of leaving Ukraine, albeit in a referendum occurring in the midst of the presence of armed militias, harassment of anti-referendum activists and reports of vote rigging, according to a United Nations report this week.

While there’s no way to know how residents of Kharkiv, Donetsk and Luhansk would vote in a referendum held today under similar conditions, it’s likely they would favor an exit of Ukraine by a bigger margin than they indicated in polls about a merger with Russia conducted during a period in which PR controlled the legislature and, for most of the period, the presidency.

There are regions of Ukraine on the other end of the political and Russia-identifying spectrum, and they are just as extreme. In four oblasts in 2010, one major presidential candidate’s vote share was more than 80 percentage points greater than the other’s: Donetsk and Luhansk, for Yanukovych; and Ivano-Frankivsk and Ternopil, for Tymoshenko. Driving from the administrative center of either Ivano-Frankivsk or Ternopil to Russia would take over 10 hours. Neither’s share of the population with the nationality or mother tongue of Russian reached even 2 percent in the last census. Fewer than 5 percent of respondents, on average, backed merger with Russia in the polls from 2008 to 2014.

Even between the extremes, Ukraine is highly polarized. In the last presidential election, the median difference between the leading candidate’s vote share and the other major party’s, across the 25 oblasts and two special cities, was 47 percentage points. U.S. political commentators often lament the increasing polarization of voters in their country. Yet in the last U.S. presidential election, which was about as closely contested nationally as the 2010 Ukraine election, the median gap between President Barack Obama’s vote share and Republican challenger Mitt Romney’s across the 50 states and Washington, D.C., was 17 percentage points. Only in D.C. did either candidate have an edge over 50 percentage points (Obama got 83.63 percentage points more support than Romney in the capital). In Ukraine, 10 of the 28 voting blocs had gaps that large.

If the three other heavily pro-Russia regions follow Crimea to the exits, Ukraine would be less divided — and a pro-Europe government that could demonstrate competence likely would enjoy broad support. That helps explain why Russia may not want to annex any more of Ukraine than it already has, even if other Ukrainians want it to: A weak, divided Ukraine — or even one in civil war — may be exactly what Russian President Vladimir Putin prefers. And barring further dissolution, those divisions likely will be laid bare in the presidential election scheduled for next month.