The argument was something like this. During the past six presidential elections, from 1968 through 1988, 21 states voted Republican every time. These included almost all states in the fast-growing West — most importantly, California and its trove of electoral votes — along with some wealthy, suburban states (Illinois, New Jersey and Virginia) and a couple of traditionally Republican states in New England (including Vermont).1 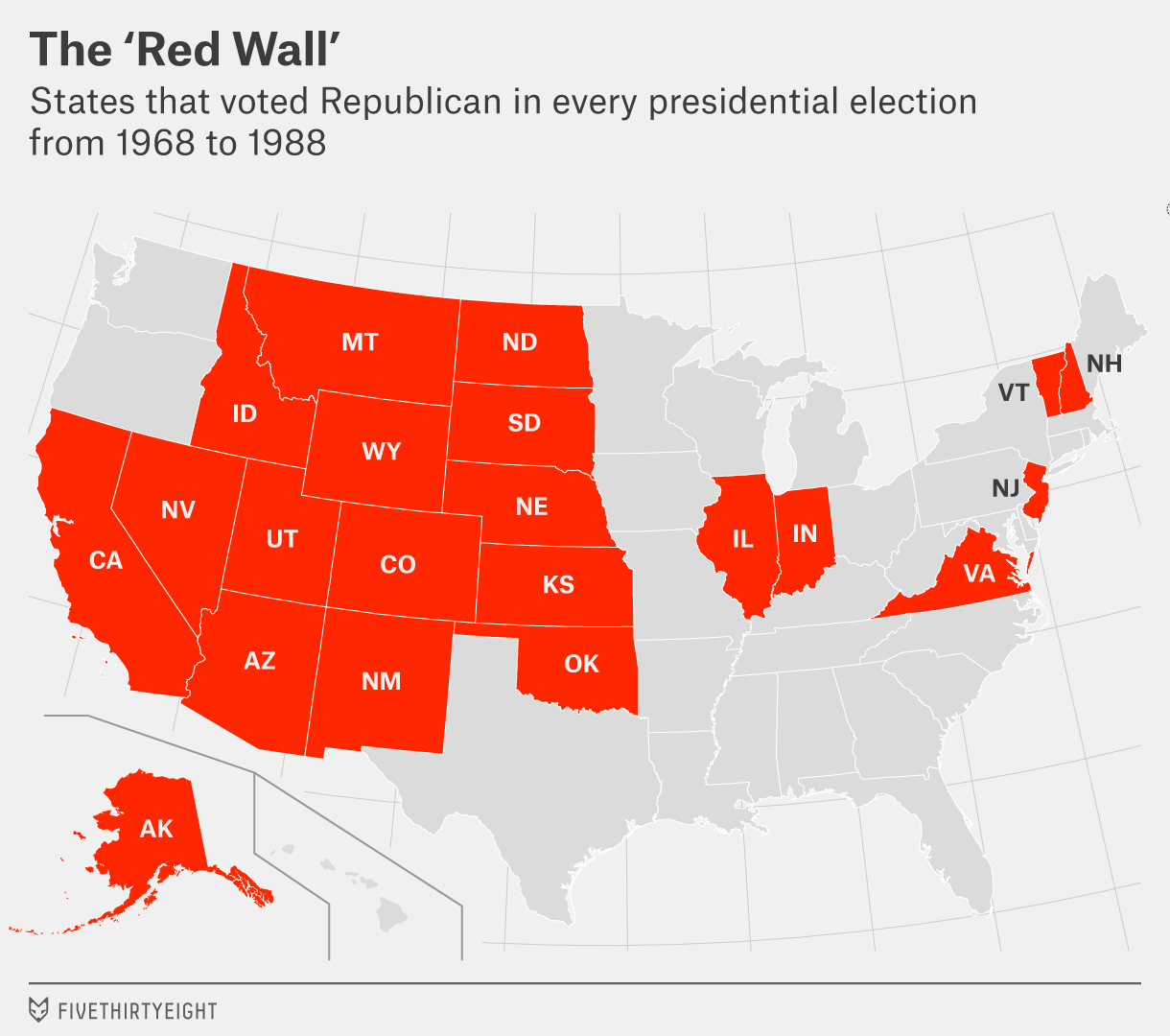 Together, these states accounted for 191 electoral votes. They weren’t quite enough to clinch victory for the Republicans, the argument went, but they put the GOP at a substantial advantage. The Democrats, who’d won only the District of Columbia every time, had to win more than three-quarters of the electoral votes from the remaining, “competitive” states. 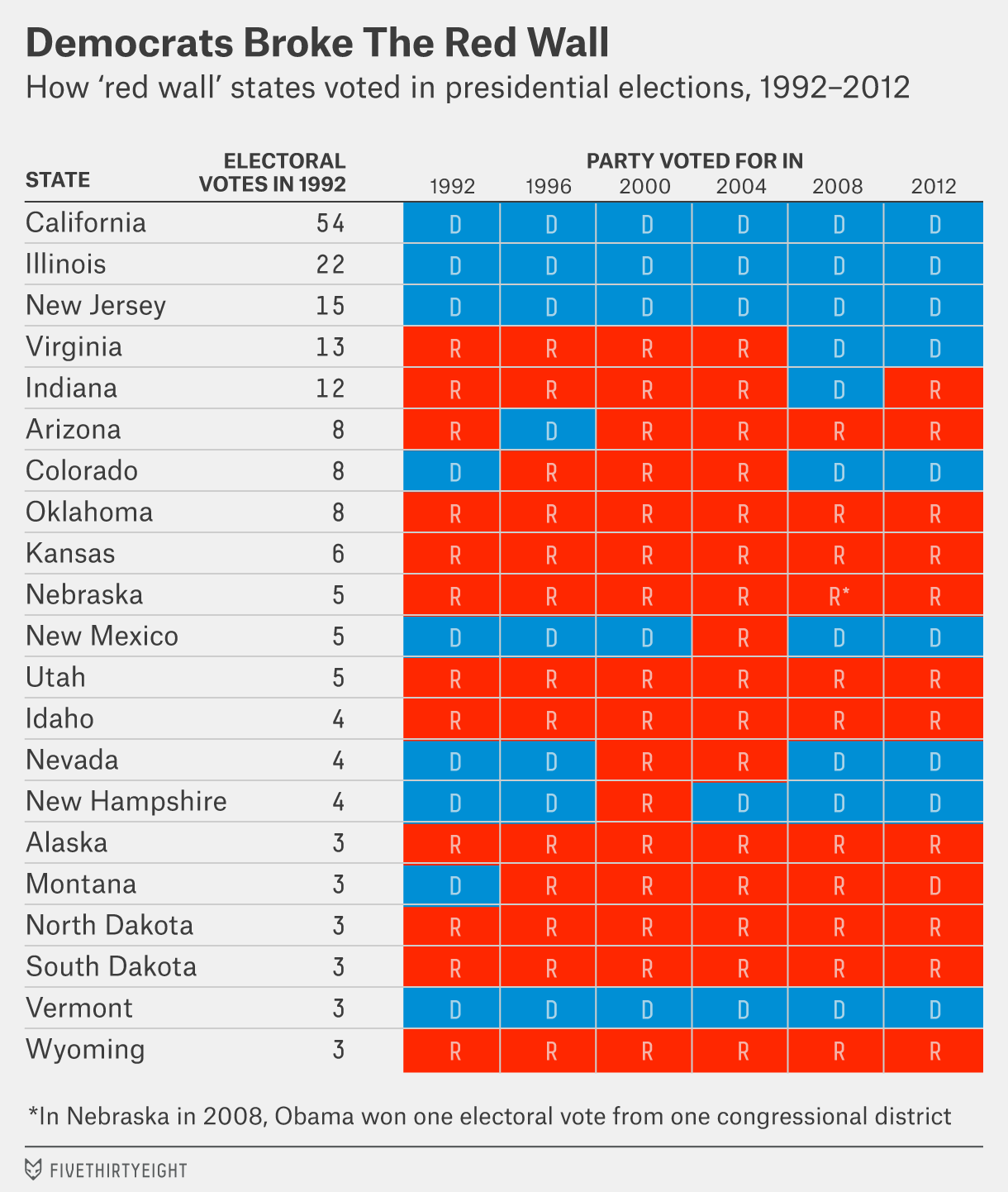 Nowadays, of course, it’s become common to hear talk about the “blue wall” — the set of 18 states that, along with the District of Columbia, have voted for the Democrat in each of the most recent six presidential elections, from 1992 through 2012. Together, they represent 242 electoral votes. Many pundits, ignoring the lessons of history, claim the “blue wall” or some close variation of it puts the Democratic nominee (likely Hillary Clinton) at a substantial advantage for 2016.

The error that these commentators are making is in attributing the Democrats’ recent run of success to the Electoral College. In fact, the Electoral College has been a minor factor, if it’s helped Democrats at all, and one probably best ignored until the late stages of a close presidential race.

But wait. Wasn’t Barack Obama’s margin in the Electoral College in 2012 — 332 electoral votes, to Mitt Romney’s 206 — awfully impressive given that he won the popular vote by only a few percentage points?

Actually, it was pretty much par for the course. The nature of the Electoral College is to accentuate small margins in the popular vote; Obama’s electoral vote tallies have been fine, but historically ordinary.

In the chart below, I’ve plotted the past century’s worth of presidential elections (from 1916 to 2012). The horizontal axis shows the Democrat’s margin of victory or defeat in the popular vote and the vertical axis how many electoral votes he received. (Totals are prorated to 5382 electoral votes, the current total.)3 Then I’ve drawn an “S”-shaped curve to show the long-term relationship. 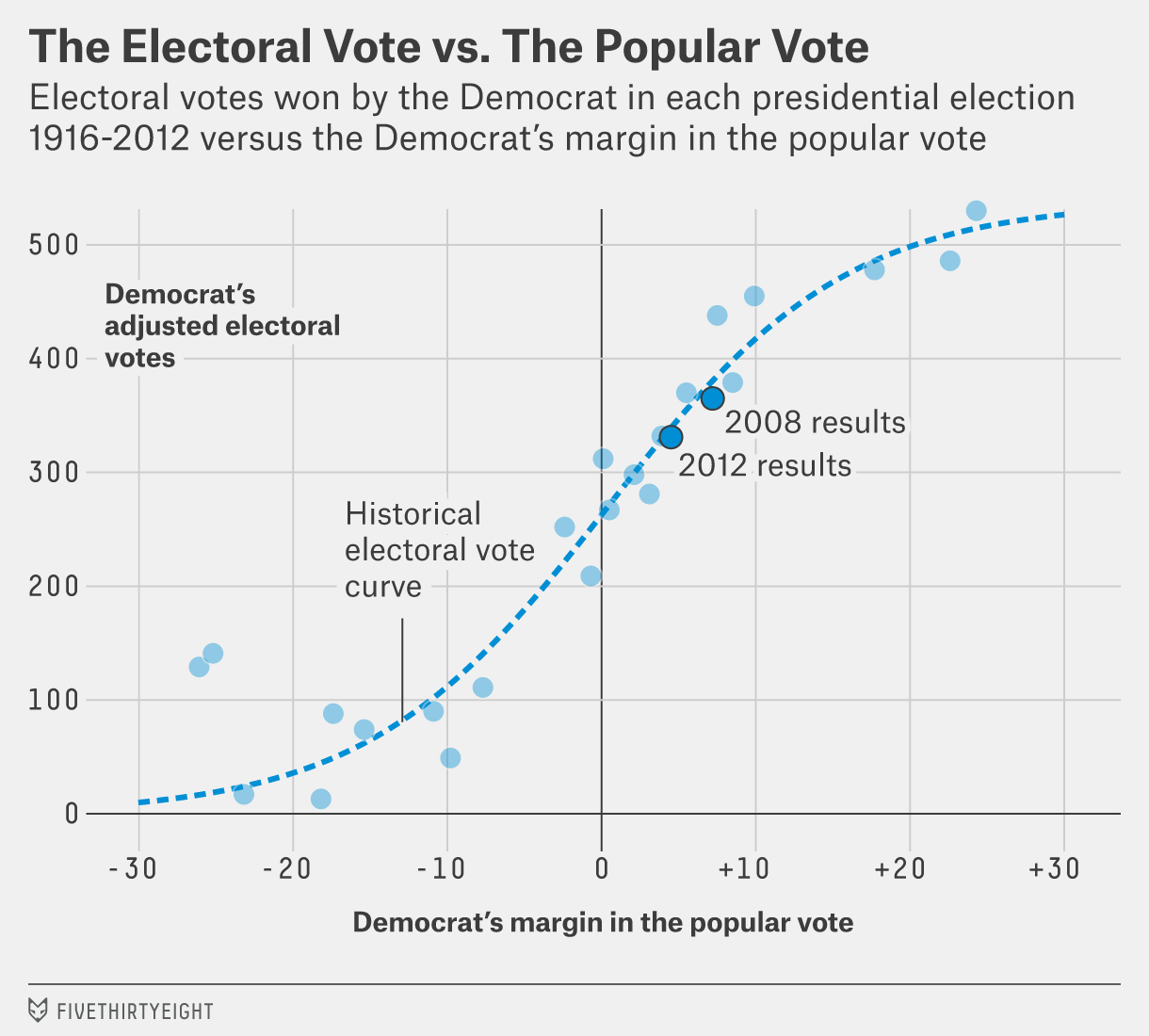 Based on the past century’s worth of data, you’d expect a Democrat who won the popular vote by 3.9 percentage points — as Obama did against Romney — to win about 330 electoral votes. That pretty much exactly matches Obama’s 332.

So when commentators talk about the Democrats’ “blue wall,” all they’re really pointing out is that Democrats have had a pretty good run in presidential elections lately. And they have, if you conveniently draw the line at 1992 (it doesn’t sound so impressive to instead say Democrats have won five of the 12 elections since 1968). During that time, Democrats have won four elections pretty clearly, lost one narrowly and essentially tied the sixth. This has been evident from the popular vote, however. The one time the Electoral College really mattered — that was 2000, of course — it hurt the Democrats.

Republicans, in all likelihood, would have won by similar Electoral College margins if they’d done as well as the Democrats in the popular vote, casting all sorts of cracks in the blue wall. Suppose, for instance, that Romney, rather than Obama, had won the 2012 election by 3.9 percentage points. What would the map have looked like? 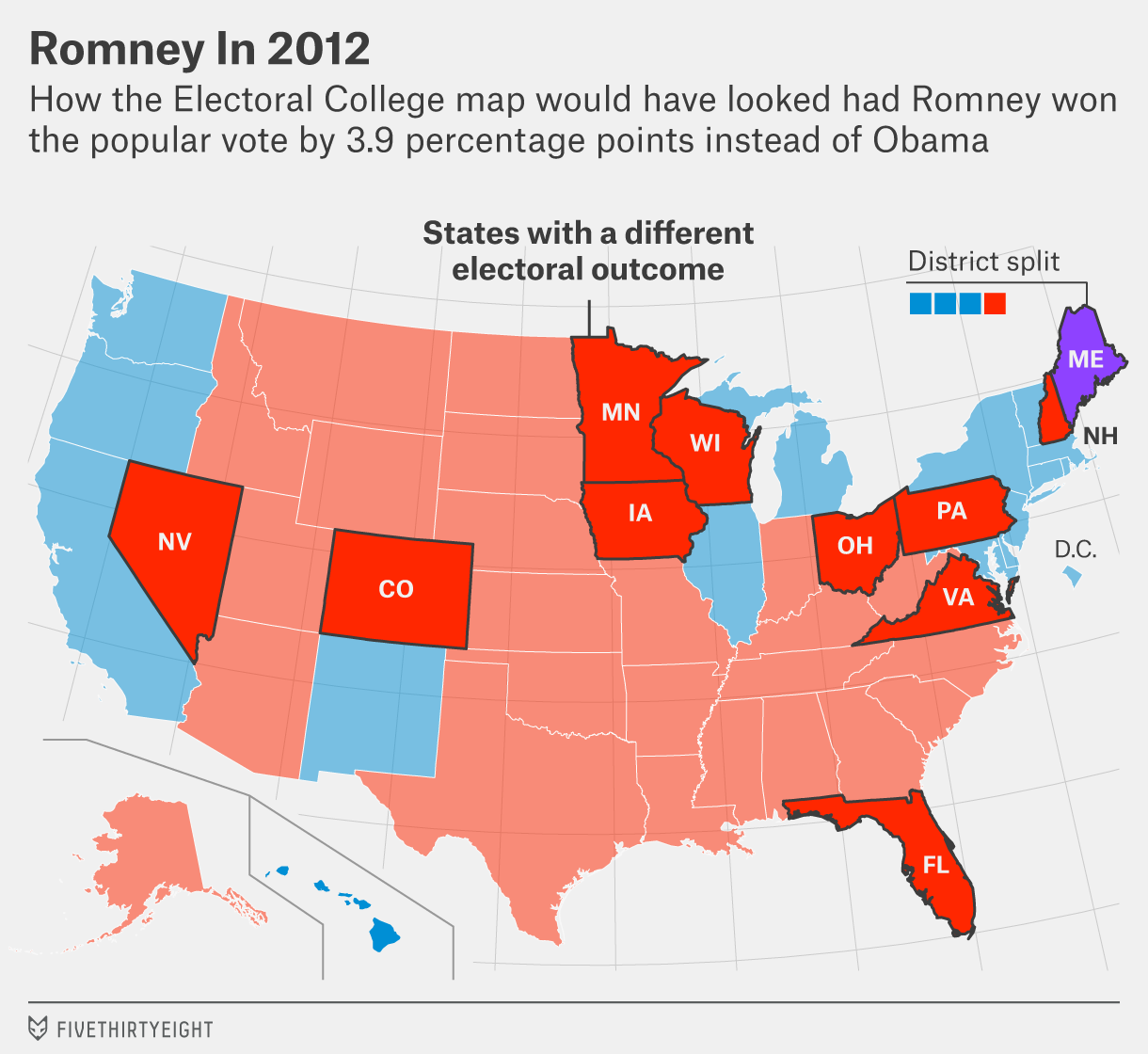 It would have looked pretty red. A 3.9-point Romney victory represents a 7.8-point swing from the actual result. So if the swing were distributed uniformly, Obama would have lost every state that he won by 7.8 percentage points or less. That means he’d have lost three “blue wall” states — Minnesota, Pennsylvania and Wisconsin — along with Colorado, Florida, Iowa, Nevada, New Hampshire, Ohio and Virginia.

An alternative technique is to assume that some states are more “elastic” than others, meaning that they contain more swing voters and are more responsive to national trends. Based on our previous calculations, for instance, New Hampshire is relatively elastic — its vote swings a lot — whereas Georgia (where there are a lot of black voters and a lot of conservative whites and not many voters in between) is less so.

Where you’d see more evidence of an impregnable “blue wall” is in the event of an extremely lopsided election. Suppose that Democrats had lost the 2012 election by 18.2 percentage points, as Walter Mondale did to Ronald Reagan. In 1984, Mondale won only 13 electoral votes — 10 from his home state of Minnesota, plus D.C.’s three. In contrast, I estimate that a Democrat losing by that margin now would still carry states totaling 104 electoral votes: California, New York, Maryland, Vermont, Hawaii, and D.C. That’s a reflection of the fact that the country is far more geographically polarized than it once was.

But this cuts both ways. If Obama had won by Reagan’s 1984 margin, Republicans would still have won Texas, Tennessee, Alabama, South Carolina, Kentucky, Louisiana, Oklahoma, Arkansas, Kansas, Mississippi, Utah, Nebraska,4 West Virginia, Idaho, North Dakota, South Dakota and Wyoming — for 136 electoral votes. Neither party’s slate is close to a majority, however, and they mostly offset each other. (In the chart below, I’ve run this calculation for all possible outcomes, up to a 30-point win for either party.) 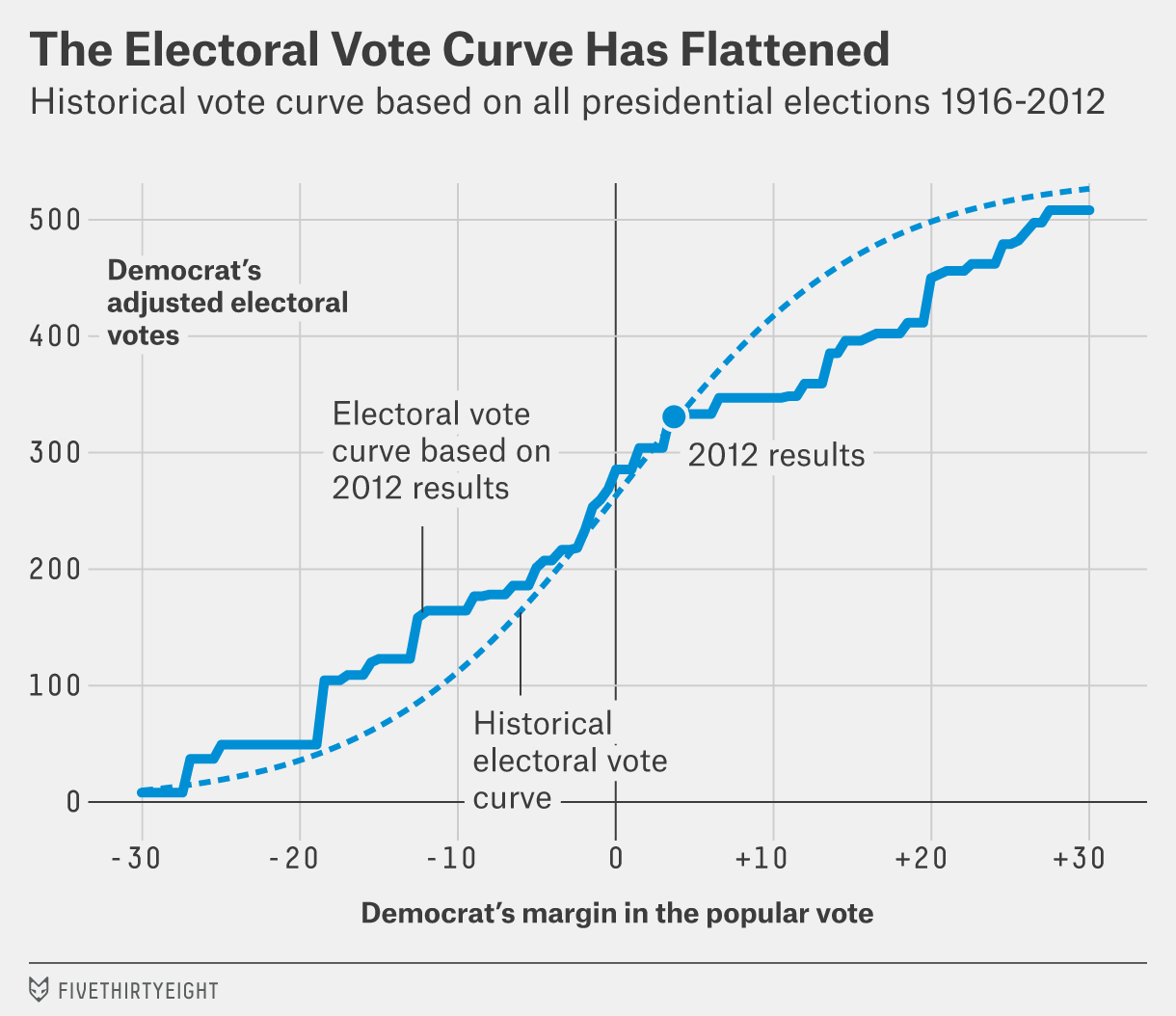 What about in the event of an extremely close election, instead of a lopsided one? Another election as close as 2000, for instance?

Obama would probably have won such an election in 2012. My method has him winning the Electoral College 285-253 in the event of an exactly tied popular vote, for instance.

But it would have had to be very close indeed. If Obama had lost the popular vote by just 1 percentage point, for instance, I have him losing the election 279-259, as highly elastic states like New Hampshire and Colorado would have fallen out of his column.

The net impact of this is minor. Our Election Day forecast in 2012 estimated that there was about a 5 percent chance that Obama would win the Electoral College but lose the popular vote (and about a 1 percent chance that Romney would do so).5 So if you want to argue that Hillary Clinton’s chances of winning the popular vote next year are 50 percent but that her Electoral College chances are more like 53 percent or 55 percent instead, go ahead — that’s probably about what the “blue wall” amounts to. (And even that advantage is tenuous, possibly reflecting Obama’s superior turnout operation in swing states — an edge that Clinton might or might not replicate.)

Hey, look: I can get carried away, too.6 If the 2016 election turns out to be close, we’ll be sweating the small stuff by October and November. The difference between a 50 percent and a 55 percent chance of victory for Clinton or Marco Rubio or whomever because of Electoral College dynamics will seem like a pretty big deal.

But for now? The Electoral College just isn’t worth worrying about much. If you see analysts talking about the “blue wall,” all they’re really saying is that Democrats have won a bunch of presidential elections lately — an obvious fact that probably doesn’t have much predictive power for what will happen this time around.

I’m not saying Clinton is doomed. Rather, I think the “fundamentals” point toward her chances being about 50-50, and I wouldn’t argue vigorously if you claimed the chances were more like 60-40 in one or the other direction. But Clinton is no sort of lock, and if she loses the popular vote by even a few percentage points, the “blue wall” will seem as archaic as talk of a permanent Republican majority.