There’s already plenty of bad punditry regarding the chances of Hillary Clinton — who officially announced her candidacy on Sunday — to become the 45th president. You can find Democrats boasting about their “blue wall” in the Electoral College and how hard this will make it for any Republican to win. Or Republicans warning that the Democratic Party rarely wins three elections in a row.

Most of this analysis is flimsy. So is the commentary about the ups-and-downs in early swing state polls. And when you see some pundit declaring a minor misstep to be a “game changer,” find someone else to follow on Twitter.

The truth is that a general election win by Clinton — she’s very likely to become the Democratic nominee — is roughly a 50/50 proposition. And we’re not likely to learn a lot over the rest of 2015 to change that. Here’s why:

Incumbency and Obama’s Approval Rating. Start with the fact that there’s no incumbent president running. There actually haven’t been a lot of cases that precisely meet the circumstances voters will face next year: Barack Obama, assuming he serves out the rest of his term, will become just the fifth president limited by the 22nd Amendment from seeking an additional term in office.1 Still, the evidence we have from presidential elections and from other contexts like gubernatorial elections is that these cases default to being toss-ups.

Clinton’s chances will be affected by Obama’s popularity as he exits office. The relationship between the popularity of the previous president and the performance of the new nominee from his party isn’t perfect — Al Gore (narrowly) lost in 2000 despite Bill Clinton’s popularity, for example — but it certainly matters some, especially given that Clinton served in Obama’s cabinet.

However, Obama currently has an approval rating of about 45 percent, and a favorability rating of 48 percent — about average, in other words. If those numbers decline into the low 40s or climb into the 50s, they could matter more, producing either a “hangover effect” or “halo effect” for Clinton. But don’t bet on this: Obama’s approval ratings have been extraordinarily stubborn for most of his presidency, rarely deviating much from the mid-40s.

The Economy. I’d warn against simplistic economic “fundamentalism,” the notion that the economy is pretty much the only thing that matters. We’ll save the technical discussion for later, but because of a problem known as overfitting, statistical models that claim to make remarkably precise predictions about election outcomes from economic variables alone (without looking at polls) have a mediocre track record.

Still, the economy will matter a lot to voters, and a better economy will help Clinton, the candidate from the incumbent party. As Byron York points out, you should be wary of claims that 2016 will be a “foreign policy election.”2

Like Obama’s approval ratings, however, the performance of the American economy has been about average recently. GDP grew by 2.4 percent in 2014, adjusted for inflation, close to the historical average. Furthermore, we know relatively little about what economic growth will look like a year from now, when the general election campaign heats up. Historically, economists have shown almost no ability to predict the rate of economic growth more than six months in advance.

Mostly, the “blue wall” was the effect of Obama’s success in 2008 and 2012, not the cause of it. If the economy had collapsed in the summer of 2012, Obama would probably have lost the election, and most of those blue states would have turned red.

It’s true that in both elections, the “tipping-point state” (in both years it was Colorado) was slightly more Democratic than the country as a whole. That implies Obama would have won if the popular vote had been very close. But it would have had to be very close indeed — within a percentage point or two.

That advantage is small enough that it might have been the result of circumstances peculiar to Obama and his campaign. If Clinton has an ever-so-slightly different coalition — say more working-class whites vote for her but fewer African-Americans — this small advantage could evaporate or reverse itself. (The Electoral College favored Republicans as recently as 2000, after all.) The same might be true if she isn’t as effective as Obama at mobilizing voters in swing states.

Another theory — the so-called “Emerging Democratic Majority” — holds that demographic trends favor the Democratic Party. We’ll have a lot more to say about this theory between now and next November, but it’s probably dubious too.3 As Sean Trende has pointed out, it relies on a selective reading of the evidence — emphasizing 2012, 2008 and 2006 but ignoring 2014, 2010, and 2004. Perhaps more important, predictions made on the premise of “emerging” majorities have a miserable track record: Republicans were bragging about their “permanent” majority in 2004, for instance, only to get their butts kicked in 2006 and 2008.

Clinton and the Republican Candidates. The factors I’ve described so far are sometimes referred to as the “fundamentals” — those things that matter regardless of the candidates and their campaigns. The closer these basic factors are, the more difference the candidates could make.4

Nonetheless, the candidates matter less in U.S. presidential elections than in just about any other type of electoral contest. The reason is that the arduous, 50-state nomination process (and the “invisible primary” before it) screens out most candidates who would be huge liabilities to their party. An underqualified or unvetted or politically extreme or profoundly unpopular candidate might win one primary or caucus, but voters and the political parties will move to stop him in his tracks after that, as Republicans did to Newt Gingrich in 2012.

Consider the three measurable factors that our U.S. Senate model uses to evaluate candidates. One of them is their qualifications on a 4-point scale as measured by their highest elected office, where the highest rating goes to those candidates previously elected as governors or senators. Almost all presidential candidates — including Hillary Clinton and the viable Republican candidates this cycle — rate as extremely well qualified by that standard.

Another factor is fundraising, which is important unto itself, but also as a proxy for a candidate’s organizational strength. We’re not breaking any news here, but Clinton and the Republican nominee are going to raise oodles of money — probably in excess of $1 billion each, beyond what Obama and Mitt Romney did in 2012. That’s well past the point of diminishing returns. The candidates may struggle to make good use of all the money they’ve raised, in fact, and if one brings in 10 or 20 percent more than the other, it’s not likely to matter very much at the margin.

The third factor is a candidate’s ideology as measured on a left-right scale. “Extreme” candidates (like Barry Goldwater) suffer an electoral penalty, while moderate ones (like Dwight Eisenhower) usually perform well.

But nominees like Goldwater (or George McGovern) are rare. So are those like Eisenhower, for that matter. Usually a party nominates a candidate closer to the median of its voters and elected officials.

That’s part of why Clinton is such a safe bet to be the Democratic nominee. Her political positions are essentially those of a “generic Democrat.” She’s neither a true centrist, nor extremely far to the left, so she’s not especially vulnerable to a challenge from either flank of her party.

But the positions of the Republican candidates are likely to converge toward one another. Bush, in the primaries, will seek to prove his conservative credentials, while Walker, should he become the frontrunner after the first few primaries and caucuses, will work to reassure GOP elites that he’s an “electable” alternative and not the next Goldwater. By next November, the difference might boil down to the equivalent of couple of percentage points on the general-election ballot. It could matter in an a close election, but not one where the fundamentals have shifted strongly to one party by then.

Finally we can look at what the polls say right now. If you’re going to do this, you should take the polls with whole tablespoons full of salt. And it’s probably best to look at the favorability ratings for each candidate rather than head-to-head polls, since favorability polls allow voters to say they don’t know enough about the candidates to have formulated an opinion. (Head-to-head polls taken this far out from the election will tend to favor candidates like Clinton with strong name recognition, by contrast.) 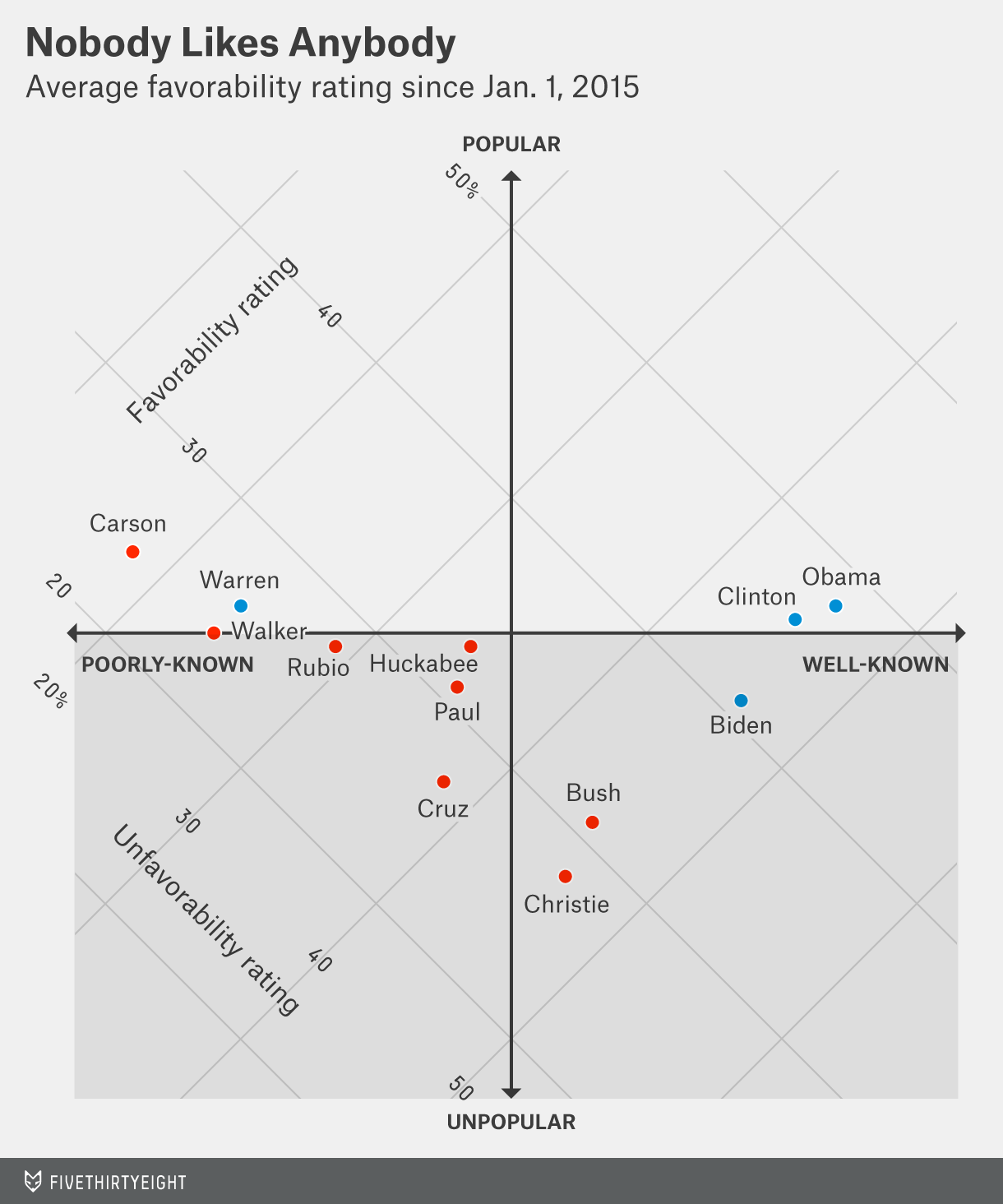 Clinton’s ratings are down sharply from her tenure as Secretary of State. However, as we’ve been warning Democrats for a long time, a lot of this was predictable. Clinton’s numbers have often been about break-even when she’s been a highly partisan figure — during the early stages of the 2008 campaign, for example — and better only when she’s been above the fray of day-to-day partisan politics.

Break-even favorability ratings don’t look so bad, however, when compared to some of the alternatives. Vice President Biden’s are net-negative, for instance. On the Republican side, Walker and Marco Rubio aren’t all that well-known yet, but their ratings are also about break-even. Chris Christie’s are terrible (28 percent favorable, 46 percent unfavorable). Jeb Bush’s are quite poor too. His unfavorable rating is already as high as Clinton’s, 45 percent, but his favorable rating is just 31 percent.6

Clinton is so well-known, in fact, that it’s almost as if voters are dispensing with all the formalities and evaluating her as they might when she’s on the ballot next November. About half of them would like to see her become president and about half of them wouldn’t. Get ready for an extremely competitive election.

Editor’s note: This article was updated to reflect Clinton’s announcement of her candidacy this afternoon.