On Friday, shortly after the government released its latest in a series of strong monthly job reports, I asked Labor Secretary Tom Perez about the state of the job market. After touting the recent gains – 3 million new jobs in 2014, the fastest decline in the unemployment rate in a generation – Perez said the economy still isn’t back to full health. He cited one measure in particular: the number of unemployed workers per available job, which he argued remains too high.

On Tuesday, we got an update of that measure in the monthly Job Openings and Labor Turnover Survey, known as JOLTS. The report showed that employers had nearly 5 million open positions at the end of November, the most since 2001. There are now 1.8 job seekers per available job, the fewest since January 2008. 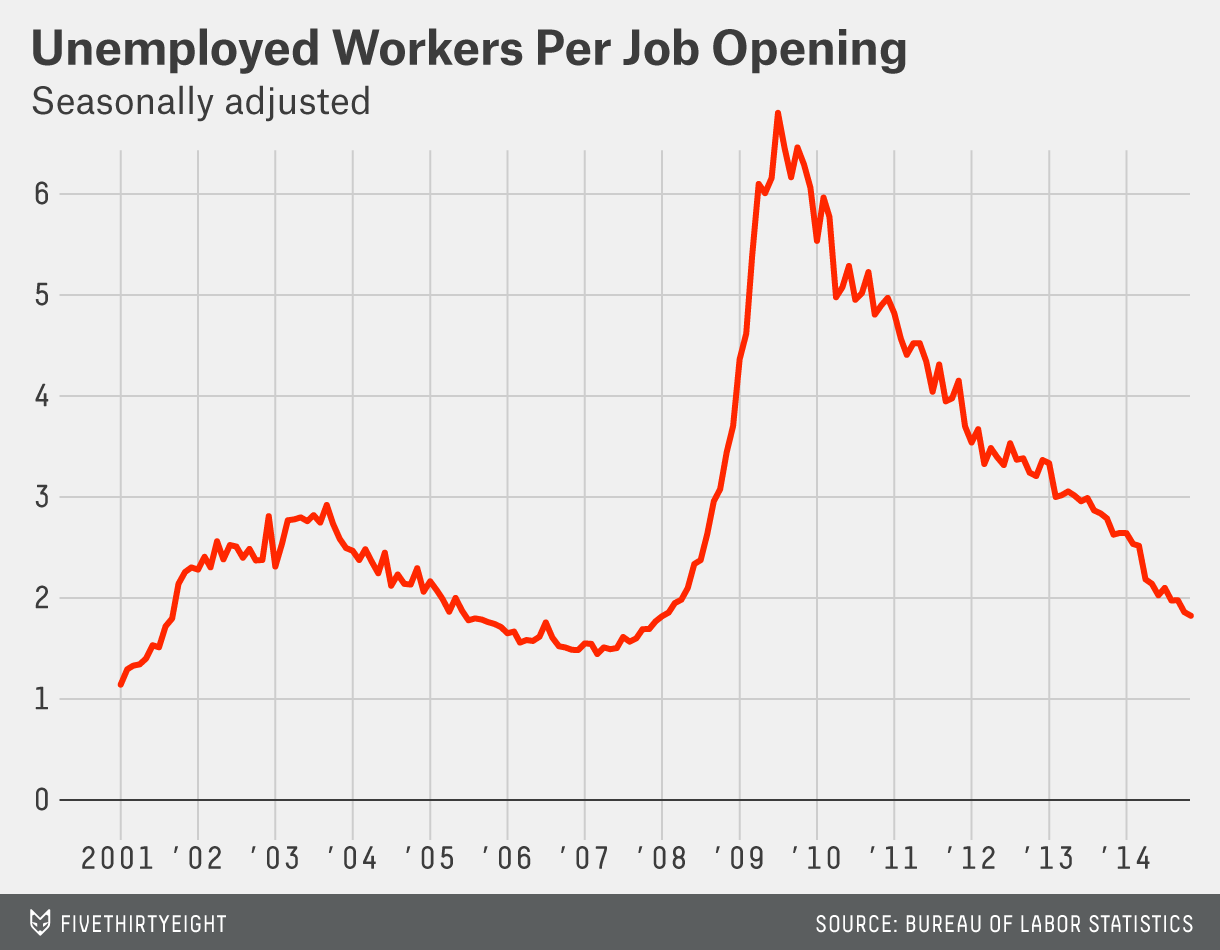 Perez noted that before the recession, the number of unemployed workers per opening dipped below 1.5, and it got even lower in the early 2000s. (JOLTS data only goes back to 2001.) So he’s right that there’s still room for improvement. But not very much room – the ratio might not be at an all-time low, but it’s more or less back to normal.

In theory, if there are more jobs and fewer workers, that should force employers to start raising wages to attract and retain talent. So far, though, that isn’t really happening. Average hourly earnings fell in December, and while that likely represents a statistical quirk, stagnant wages have been a persistent theme of the recovery.

It isn’t clear why wages aren’t rising faster. One possibility is that the economy just hasn’t improved enough yet. Maybe if the workers-to-jobs ratio improves a bit more, employers will finally have to start offering raises. Or perhaps the ratio exaggerates improvements in the labor market because there are lots of workers who want jobs but don’t officially count as unemployed. (That can’t be the whole story, though. As I noted back in August, the workers-per-opening measure is improving even under less strict definitions of unemployment.)

The other possibility is that there are deeper, so-called structural reasons for the slow growth in wages, an issue I discussed in a bit more depth at the start of the year. Economists point to a range of possible explanations: globalization, technological change, declining unions, rising regulation. What they all share is that they won’t be solved through economic growth alone.