After years of playing it cool in the free-agency game, the San Antonio Spurs entered the market this month and were the clear-cut winners. That probably shouldn’t be a surprise: Winning is pretty much what the Spurs do. And these summer victories have them poised for many more once the season starts.

The Spurs nabbed LaMarcus Aldridge, the best (realistically)1 available free agent of the summer, negotiated new contracts for essential wings Kawhi Leonard and Danny Green, convinced Tim Duncan and Manu Ginobili to each forgo retirement in favor of another crack at a championship, and even managed to snag veteran forward David West for $11 million less than he would have made had he opted into the final season of his contract with the Indiana Pacers.

In other words, it was a good week for Gregg Popovich.

To measure just how good it was — or how dominant next season’s Spurs figure to be, I dusted off last year’s preseason projection system (fueled by Real Plus-Minus), plugged projected RPM values into Rotoworld’s depth charts, and (unscientifically) estimated how much playing time each player will receive.2 Here’s a first pass at how good San Antonio could be next season: 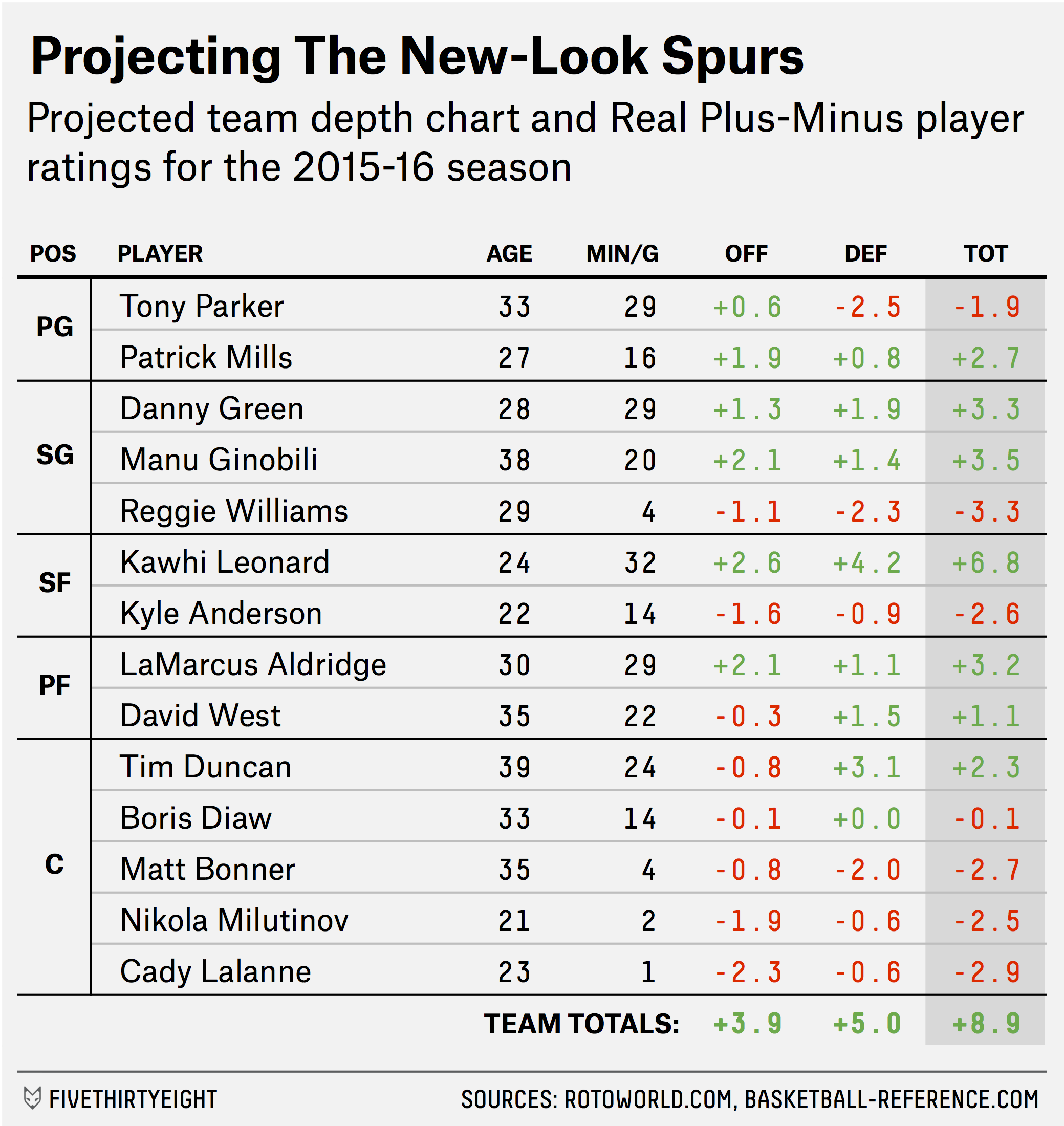 That predicted power rating of +8.9 means the Spurs are talented enough to win about 60 games,3 which is very high for a true talent projection. A lot of luck and variance lurks out there, ready to make a team’s record different from its underlying skill, so most teams that win 60 or more games don’t actually possess 60-win talent. (Using Statistical Plus/Minus talent ratings, I found that only 18 percent of teams that won 60 or more games in a season4 since 1979-80 truly had 60-win talent on their rosters.) But this Spurs roster appears to really have that much talent.

It’s a formidable group that stacks up against any of the other teams across the league — even the defending champions in Oakland. To test this, I ran similar projections for a handful of other notable teams that were either good last season and didn’t lose much talent over the offseason (like the Warriors) or have enjoyed an eventful offseason thus far.5 Here were the best of those squads:

According to these preliminary projections, the Spurs are excellent, although they’re not a super-team. (In other words, they’re not a juggernaut that looks poised to blow away the rest of the league.) In the eyes of RPM, they’re essentially tied with Golden State now as the best team in basketball, closing the gap that existed between the two teams last season.

But San Antonio and Golden State do seem to be well ahead of the rest of the league. Cleveland ranks third among teams I checked but is still four to five wins behind the leaders, according to the power ratings. (Oklahoma City is two to three wins behind Cleveland; Houston is one to two wins behind Oklahoma City; and then there’s Toronto and a distant group containing Memphis and the Clippers.)

The Spurs were already among the class of the league before strengthening their roster this summer. While San Antonio may not shatter any records, its surgical dissection of the free-agent market has left it with arguably the best team in basketball.