WTF, nerds? You’re telling us that this season’s Golden State Warriors, who haven’t won anything yet, are better than Bill Russell’s Celtics, who won eight titles in a row and 11 in 13 seasons?

Actually, no. It would be ridiculous to say that. Last week, we released an interactive graphic, “The Complete History of the NBA,” which uses a relatively simple formula called Elo to rate NBA teams. Indeed, it currently ranks this year’s Warriors as the fourth-best team in NBA history, although they may rise or fall depending on how the rest of their playoff run goes. Meanwhile, no single season from the 1960s Celtics dynasty ranks higher than 47th on the all-time list.

But Elo’s claim is that the 2014-15 Warriors season has been better than any single season in the Celtics’ run. In terms of long-term accomplishments, of course, it’s not even close. The 1960s Celtics’ competition comes, instead, from about who you’d expect: the 1990s Bulls, the current Spurs dynasty and the 1980s Lakers and Celtics.

I’ve thought a lot about how to use Elo to rate sports dynasties. It’s a tricky problem, in part because you have to define when a dynasty begins and ends. Almost all of us would agree, I assume, that Michael Jordan’s Bulls were one continuous dynasty even though Jordan temporarily retired in the middle of it. But what about Kobe Bryant’s Lakers? Should the three titles they won from 2000 to 2002 be considered part of the same dynasty as the two they won in 2009 and 2010?

Here’s one fairly simple approach (let us know down in the comments if you have a better method): We’ll define a dynasty as ending when a team’s Elo rating falls below 1500, which is the long-term league average. This is a reasonably forgiving standard, since teams carry over part of their rating from one season to the next. For instance, the Oklahoma City Thunder’s Elo rating never fell below 1500 this season even though they started out 3-12.

By this definition, Jordan’s six titles do get grouped together. The Bulls’ rating never fell below 1527 even when Jordan was playing outfield for the Birmingham Barons. But Kobe’s five titles are not considered part of the same dynasty since the Lakers’ Elo rating was below 1500 for part of the 2004-05, 2005-06 and 2006-07 seasons.

The 1980s Lakers also had a longer streak (1,363 games) than the Celtics. But maybe, even if the Celtics’ streak was slightly shorter, they were playing at a slightly higher level than those other teams?

Not according to Elo. The Spurs had an average Elo rating of 1664 during their streak, as compared with 1634 for the 1960s Celtics. The Lakers’ Elo rating, 1641, was also slightly higher than the Celtics’.

We can also assign an overall score to each dynasty by taking a team’s average Elo rating during the streak, subtracting the league-average rating of 1500, and multiplying it by the number of games the streak lasted.2 Overall, this method has the Spurs way out in front — 40 percent better than any other dynasty. The 1980s Lakers are in second, while the 1990s Bulls jump ahead of the 1960s Celtics to place third. (What about the the Warriors? Their current “dynasty” ranks as only the 47th-best all-time. Check back in 2023.) 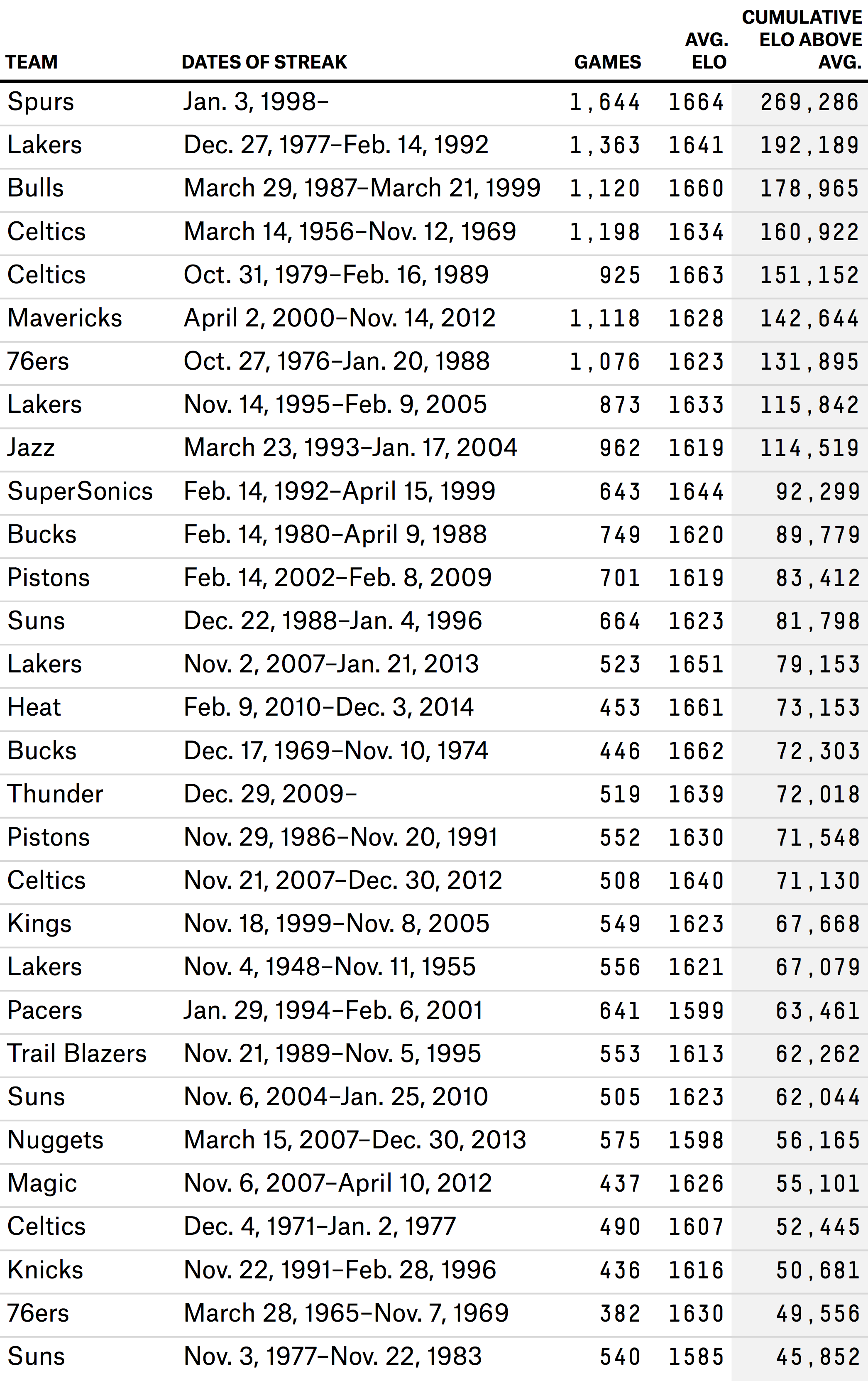 But: the rings! How can you ignore 11 championships?

You could certainly develop a dynasty-rating method that puts more emphasis on winning titles. The simple method we’re using in this article gives no special credit for them, which is why — once you get past the canonical dynasties in the top five — it likes teams like the Dallas Mavericks from 2000 to 2012, who won just one title, and the 1990s Utah Jazz, who won none.

But there’s something to keep in mind when you consider the 1960s Celtics and their rings. It’s much easier to win a championship in a 10-team league, like the NBA was, on average, when they were playing, than in the 30-team league we have now.

Here’s an illustration of that. I divided the 30 current NBA franchises into three “leagues” of 10 teams each:

Then, for each season since the NBA-ABA merger in 1976-77, I assigned a champion to each “league” based on which of its 10 teams advanced furthest in the actual NBA playoffs. When there were ties — for instance, if the last two teams from a “league” were both eliminated in the NBA conference finals — I broke them based on which team had the higher year-end Elo rating. Check out what happens:

By that calculation, the Celtics’ 11 championships are equivalent to three or four championships in a 30-team league.3 The other dynasties aren’t affected as much. Duncan’s Spurs still pretty much get full credit for all five championships. Jordan’s Bulls get credit for five or six, and the 1980s Lakers about four.

You can argue, of course, that the Celtics were so far ahead of the pack that they’d have held on to most of their championships even in a 30-team league. But they weren’t that dominant in the regular season. In Russell’s tenure with the team, they averaged the equivalent of a 58-24 regular-season record. That’s very good — but not much better than, say, Dirk Nowitzki’s Mavericks over the past 15 seasons. They weren’t even especially dominant in the playoffs! In their 11 championship seasons, Russell’s Celtics won 67 percent of their playoff games. Other NBA champions throughout history have won 73 percent of theirs.

The Celtics came through in the clutch, obviously, just about every time it mattered — Russell was 10-0 for his career in Game 7s! But if you’re accused of benefiting from playing middling competition,4 the more persuasive rebuttal comes from blowing your opponents out.

But it could be argued that the average quality of competition was higher during the 1960s, with just 10 teams or so, instead of 30. Elo doesn’t make too many assumptions about this.6 I’m not sure it’s a winning argument, however. Consider:

In other words, it seems likely that the NBA talent pool has grown at least as fast as the number of franchises since the 1960s. The 1960s didn’t even feature particularly great “fundamental” basketball. League-wide free-throw percentages were typically about 72 percent or 73 percent, compared with more like 75 percent or 76 percent now. The Celtics were the best team of their era, but also a product of it, and that era isn’t as rich for NBA competition as the one we have now.