Welcome back to Hollywood Taxonomy, my continuing effort to categorize the filmography of movie stars (see previous attempts to identify the four types of Will Ferrell movies and three types of Adam Sandler movies). Today’s star: Tom Cruise, who stars in “Mission: Impossible — Rogue Nation,” out in theaters on Friday. I pulled the data on every film that Cruise was in from Rotten Tomatoes and OpusData. I looked at films where Cruise was in a lead role or lead ensemble, which — let’s be real — was pretty much all of them.

Unlike Ferrell and Sandler movies, there are not clusters of Cruise movies, there are merely strata. His movies don’t break into easy groups because there is a direct relationship between how good a Cruise movie is — as rated on the Tomatometer — and how much money the movie makes. He is exactly what people want to believe exists in the motion picture industry: a person who gets out exactly what he puts in, which appears to be everything. Cruise does not do niche. He elevates everything he is in.

The other folks I’ve looked at normally trade wide appeal for critical success. Their movies are either considered good or popular, a pattern only overcome by an animated feature or two. But what makes Tom Cruise into Tom-Freaking-Cruise is that he defies this paradigm. His movies are better-reviewed (81 percent have ratings of 50 or higher on Rotten Tomatoes) and make more money than anyone else’s. 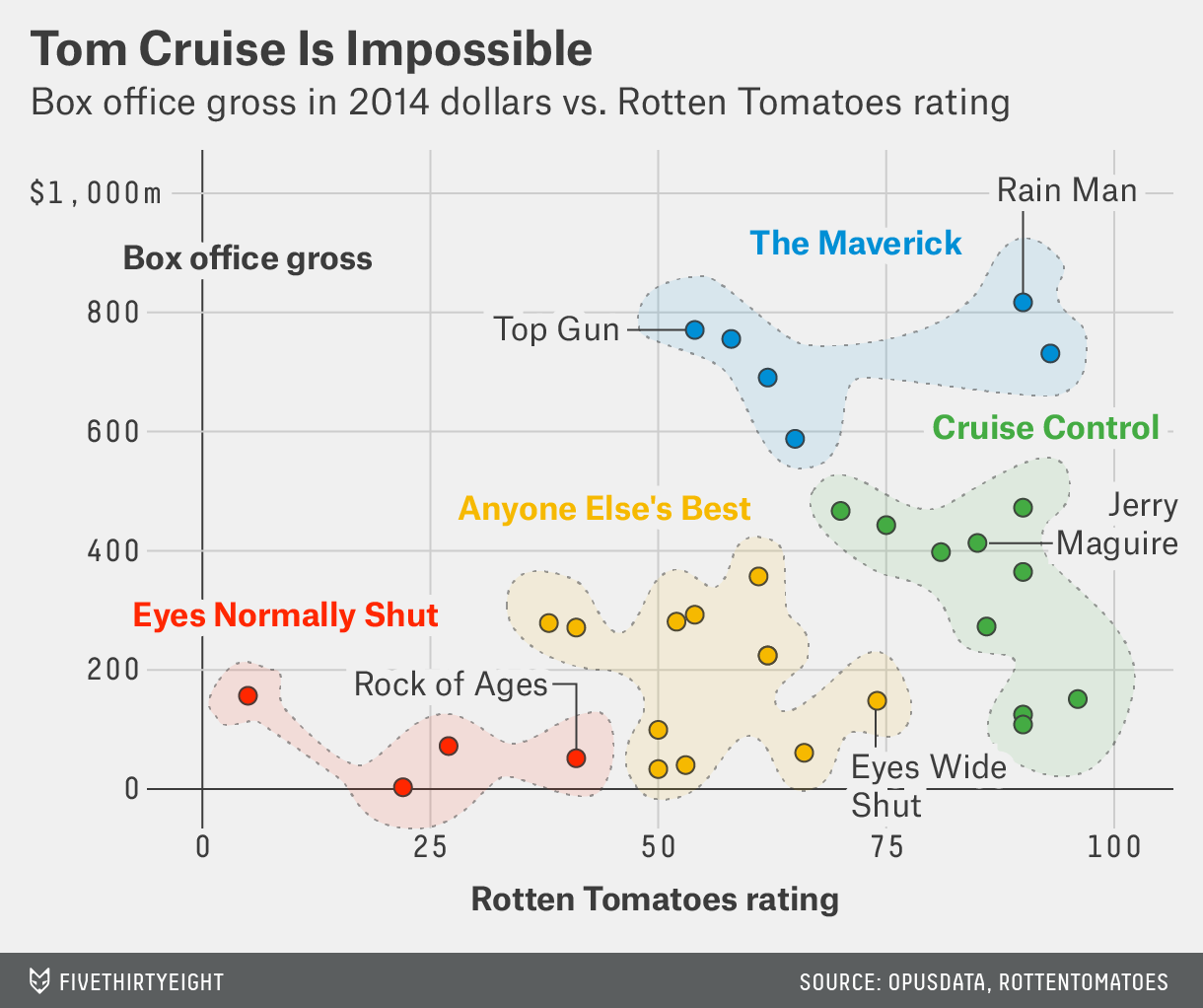 “I’m willing to start at the bottom.”

Everyone gets a few mulligans, OK? All of theses movies made less than $200 million and had lower than a 50 percent Rotten Tomatoes score. Is “Cocktail” a dumpster fire of a movie? Yes. [Editor’s note: No. Unlike Walt, I liked “Cocktail.”] But doesn’t every performer need to be in a few of those to keep them humble? That sounds like something a Hollywood reporter would say. The thing is, even in these movies you can tell he is emptying the tank. “Rock of Ages” really sucks, for instance, but it still looks like the then-50-years-old Cruise was really going for it.

Think about it this way: I had to come up with a list of movies Cruise made that weren’t good and didn’t make much money, and I could only safely pick four. Here’s an actor who has been around since the Reagan administration and has only four movies that are unambiguously crappy. That’s nearly unheard of.

“Look them in the eye. They’ll remember you.”

For any other performer this set of movies would be their finest work. These are movies that made a bunch of money — some of them safely nestled in the $200 million to $300 million ballpark — and still got not-horrible to decent reviews, ranging from a 33 through 74 on the Tomatometer. They’re a diverse group, but the gist is that they’re the kind of movies that can pay the rent and keep a performer working for a very long time.

What is interesting about these movies — and these aren’t the films that immediately come to mind when you think “Tom Cruise, Actor” — is that for other actors, this batch of films is the brass ring: A Stanley Kubrick movie before he’s 40 years old, lead in a World War II biopic, a well-regarded role as a sexy vampire protagonist two decades before people realized that’s secretly America’s fetish. This batch alone is a solid career.

But these are only Cruise’s pretty good movies. Here’s what I mean. This is that chart from up top, only I’ve also added the career of Adam Sandler, who for all our ribbing is one of the top-grossing leading men of all time. 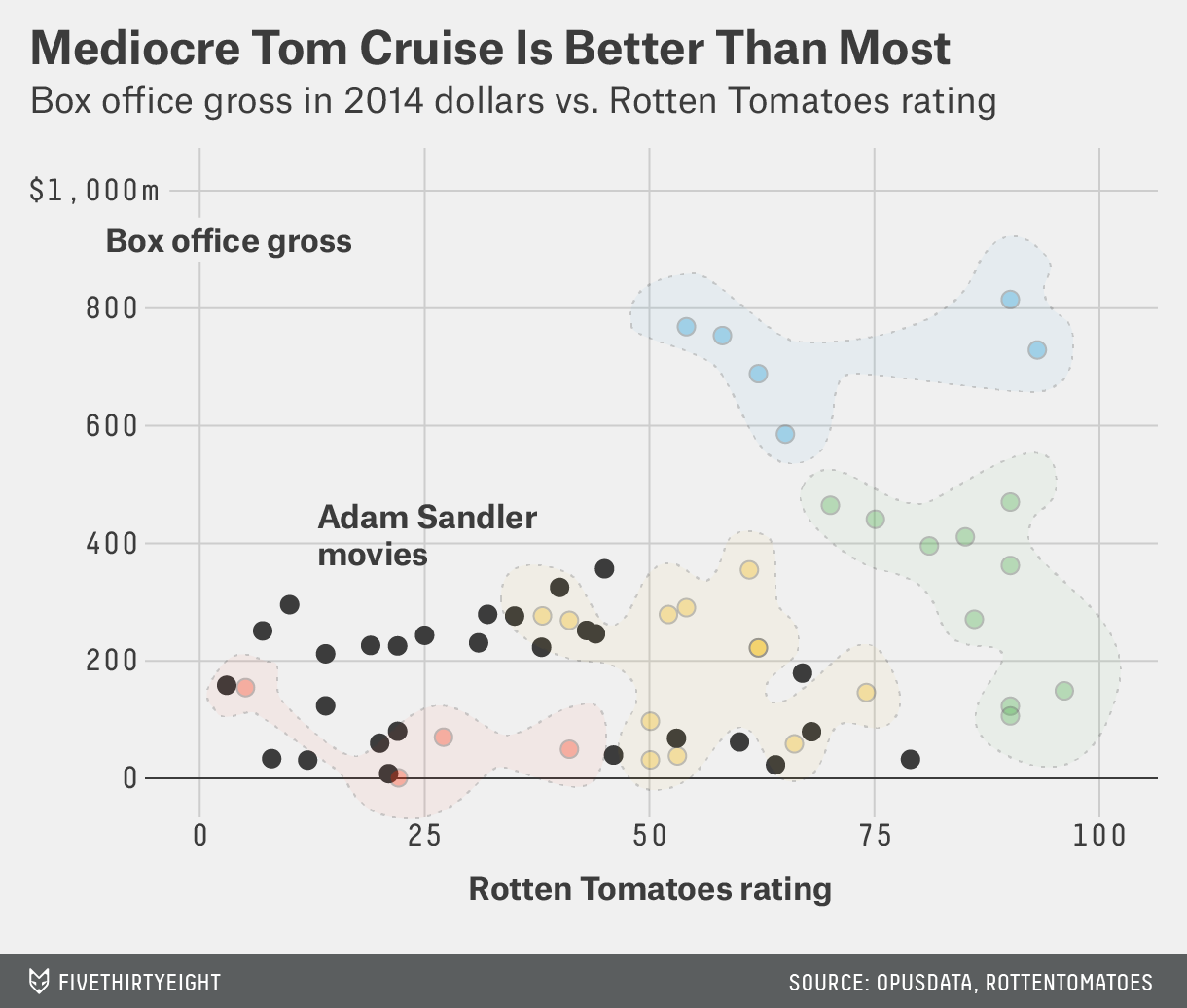 Average Cruise is better than most people at their best.

“I will not rest until I have you holding a Coke, wearing your own shoe, playing a Sega game featuring you, while singing your own song in a new commercial, starring you, broadcast during the Super Bowl, in a game that you are winning, and I will not sleep until that happens.”

Only now do we enter the true Tom Cruise Canon. These are movies that are either unambiguously fantastic or just made oodles of money. All of these movies are fun to watch — every one got higher than a 70 on Rotten Tomatoes, so critics like them, and as a result all of them made at least $100 million (adjusted for inflation) and most made more than $350 million.

Even the worst “Mission: Impossible” movie, included above, is better than a lot of the best movies in other action franchises, and this batch also includes the underrated and abysmally titled “Edge of Tomorrow.” You could make a reference to any of these movies and a person who has been on Earth and even vaguely cognizant of media would pick up on it. These are the movies that show up on those “AFI Top Whatever” lists and they are still not even the best Cruise can do.

“I think a man does what he can, until his destiny is revealed.”

— Nathan Algren in “The Last Samurai”

These are the films that make Cruise different from the rest of us — stratospheric blockbusters all. They’re the we-have-to-change-the-axis-on-this-chart movies. That previous category, the movies that are either unambiguously fantastic or just made oodles of money? Well, these movies are fantastic and made oodles of money.

They all made more than a half-billion dollars. They’re all well-regarded, and even the ones that the critics didn’t like — such as “Top Gun” — are essential cultural moments. My only qualm is that “The Last Samurai” sucks, but then again I never made somebody $587 million, so really who am I to judge?

The latest outing, “Mission: Impossible — Rogue Nation” is already getting really good reviews, and I’m going to take a bold gamble and suggest it’s going to make a whole lot of money. Cruise is 53, and he’s hanging out of planes, and he’s still great in almost everything he tries. The couch deserved it. Tom Cruise is impossible.