Will Ferrell is having a big week. On Tuesday, he received a star on the Hollywood Walk of Fame, and on Friday, his new film with Kevin Hart, “Get Hard,” comes out.

The guy has been a major force in comedy since emerging on “Saturday Night Live” in the mid-1990s, and his career has a surprising amount of depth. His attempts to bust out of the guy-who-is-hilarious-when-he-yells typecast have been varied and flip between abysmal (his attempt to anchor a major comedy action film in “Land of the Lost”) and fantastic (“Stranger Than Fiction” shows he can do drama.)

So let’s do a little Will Ferrell taxonomy. I pulled every film that Ferrell was ever in from Rotten Tomatoes and OpusData and then zeroed in on the films in which the tall guy was either in a lead role or in the lead ensemble.1 Four distinct groups stood out among these films. 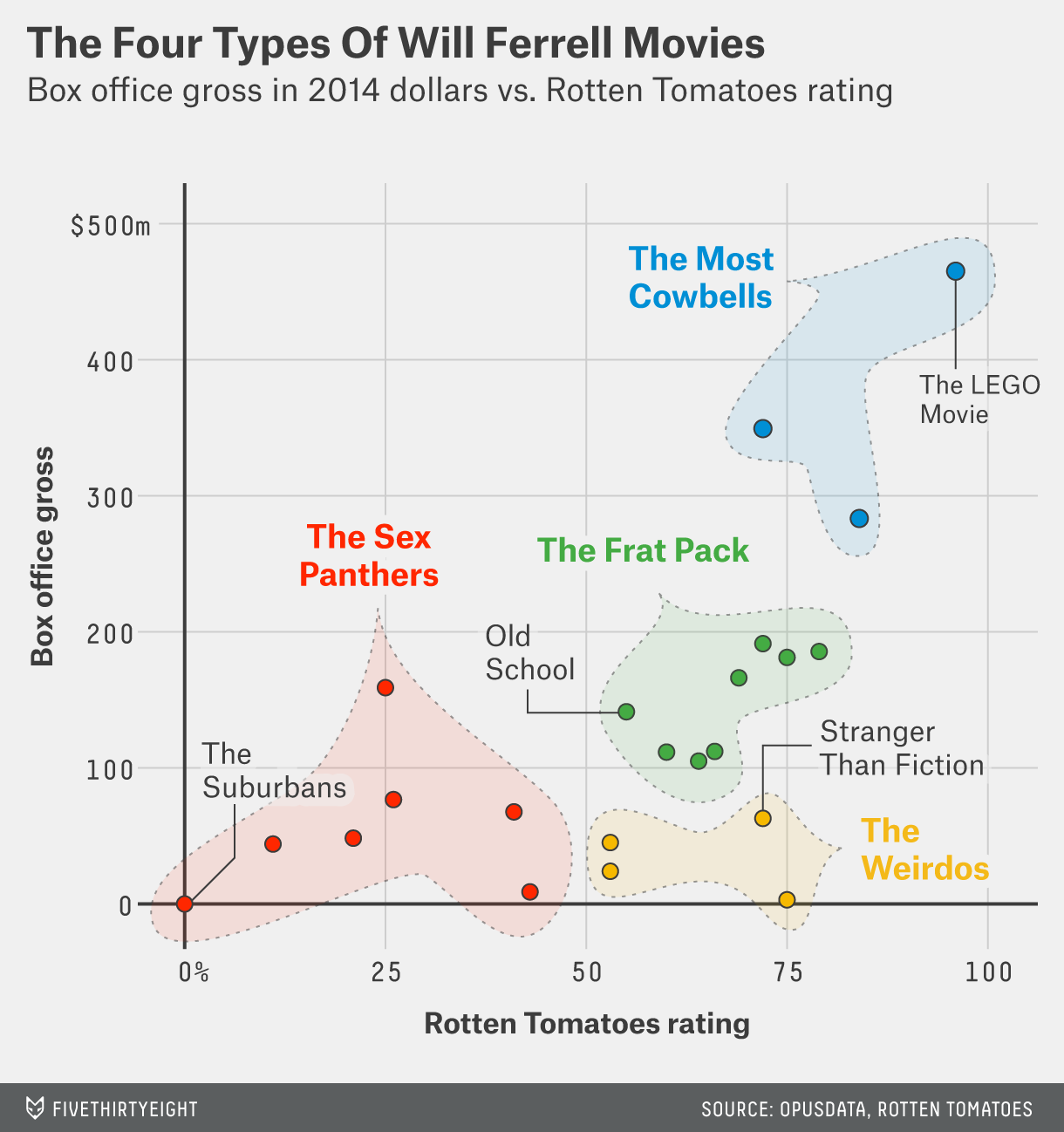 “Brian, I’m gonna be honest with you, that smells like pure gasoline.”

Let’s get this out of the way early: Like many fellow ‘SNL’ alumni, Ferrell has made a few straight-up bad movies. All these films have a Tomatometer score lower than 50 — that is, in each case, a majority of critics indexed by Rotten Tomatoes did not enjoy the picture. “Bewitched” made a bunch of money — $159 million after adjusting for inflation — but it’s still regarded as a flop. These are not good Will Ferrell movies — I’m sure it’s possible that one of these is someone’s favorite Will Ferrell movie, but there are probably not that many people like that. [Editor’s note: I like “Semi-Pro.”]

“We’ve been going to the same party every night for 12 years now … and in no way is that depressing.”

If a friend of yours woke up from a 15-year coma and asked “What’s Will Ferrell been up to recently?” you would show her one of these films. These are the frat-pack movies. The lines are the endlessly quoted ones, and the characters are the faces that launched a thousand crappy parody Twitter accounts. This is core Ferrell.

I would bet that for the vast majority of people older than 15, one of these films is their favorite Will Ferrell movie. These films are Ferrell at his best. All of them have above a 50 percent fresh rating on Rotten Tomatoes, and all of them made between $100 million and $200 million after you adjust for inflation to 2014 dollars. They’re all live-action.

Each of them has either a fellow Frat Pack member or was directed by Adam McKay. Several have John C. Reilly in them. I have a personal theory that literally any film ever made would have been drastically improved by having John C. Reilly in it.2

Interestingly — and I think this is a point that a lot of people don’t really talk about when they talk about Ferrell — all of these films made the vast majority of their money domestically. Indeed, besides “The Other Guys” (which also starred Mark Wahlberg) and “Anchorman 2” (which was a sequel), all of these movies made more than three-quarters of their revenue from domestic audiences. As domestic box office gets less reliable, studios are increasingly trying to get a larger share of their revenues abroad. When we look at the comedies that Americans — or at least American men, like me — seem to think of as iconic Ferrell, they don’t seem to register as much abroad.

“I’m sorry. I was trying to impress you. I don’t know what it means. I’ll be honest. I don’t think anyone knows what it means anymore. Scholars maintain that the translation was lost hundreds of years ago.”

There are four movies in which Ferrell had a lead role that don’t fit cleanly in either the Sex Panther or Frat Pack tier. These were OK-to-great movies that didn’t make a bunch of money. They have a higher than 50 percent fresh rating, but all made about $75 million or less when they came out (adjusted for inflation). They’re all offbeat comedies — mostly comedy-dramas — in which the big man seems like he is going a little outside of his comfort zone. One is a Kevin Smith movie, another a Woody Allen movie, another is based on a Raymond Carver short story, and the last is, well, “Stranger Than Fiction.”

Ferrell has done his most successful and critically acclaimed work when the film is rated PG. All of these movies made a fortune — upwards of $200 million each — and together have the highest average reviews of any group. The lowest-rated among the three (“Megamind”) still has 72 percent positive reviews. Plus, “Elf” is a national treasure. [Editor’s note: I didn’t like “Elf.”]

So how will “Get Hard” stack up? I wouldn’t be shocked if the film made a bunch of money, so either it’s likely to join the classic “Frat Pack” tier or it’s doomed to be relegated next to “Bewitched.” Early reviews aren’t great, but that could change as more pour in.