This may come as a shock to some of you, but Adam Sandler does not make very good movies. Sandler is taking heat this week after several Native American actors walked off the set of “The Ridiculous Six” because of racist and misogynistic jokes in the film.

But see, nobody’s really going, “I’m shocked an Adam Sandler movie was full of cheap, unoriginal jokes that punched down and play into antiquated stereotypes.” And that’s because Sandler, for the past two decades, has been one of the most consistent producers of that kind of content.

But how truly consistent is he? Riffing on my Will Ferrell analysis, I used Rotten Tomatoes and OpusData to find the critical reception and box office performance, respectively, of every film Sandler has been in and then looked at the group of movies in which Sandler played a lead role or was in the lead ensemble. Three basic groups of Sandler movies emerged: 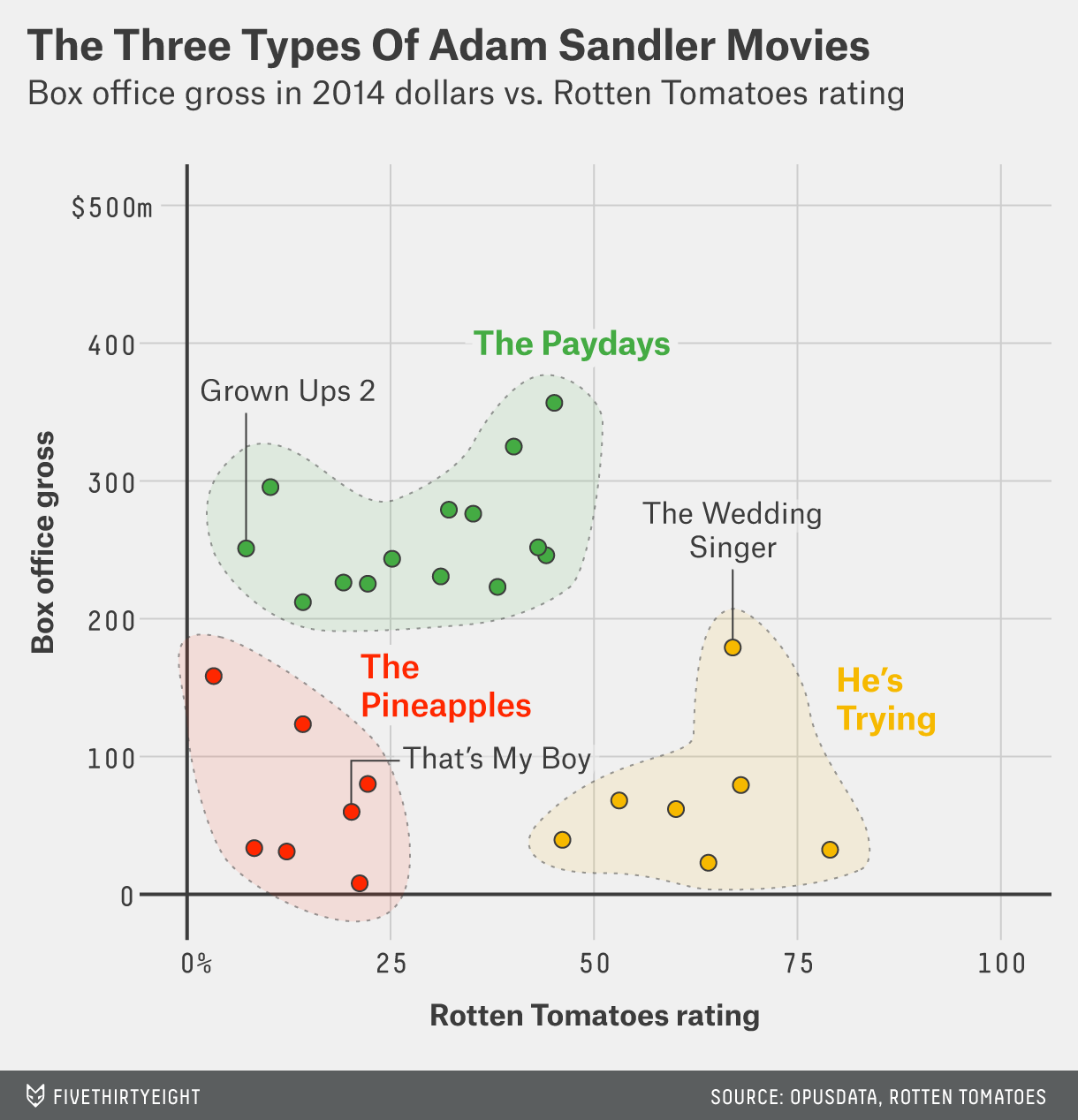 “What I’m talking about is no more involved than cosigning a loan or joining a gym.”

—I Now Pronounce You Chuck and Larry

Sandler does not make art. Sandler manufactures product. There’s nothing inherently wrong with that. He’s not deceiving anyone. Ever since he became a leading man in comedy, you could take an Adam Sandler movie poster anywhere in the world, and anyone regardless of culture could probably give you a decent summary of the contents of the film.1

Sandler, in these films, is basically store-brand cereal. Putting the credit “Adam Sandler” on a poster with a picture of Adam Sandler on it is using the same marketing strategy as putting “Corn Flakes” on the box of store-brand cereal that has a picture of corn flakes on it. Neither the store brand cereal nor the Sandler picture are improving the overall quality of American consumption. They’re each providing a baseline, predictable product that will perform consistently and make money for its producer. Your grocery store is not trying to score a surprise hit of the summer with generic Corn Flakes. Neither is Sandler. As long as the films make $200 million to $300 million on a $50 million to $85 million budget, everyone is happy. And you buy it because it’s cheap and will shut the kids up for a few goddamn minutes.

“Remember, you have to shove a pineapple up Hitler’s ass at 4 p.m.“

And that’s the worst possible thing that can happen for an Adam Sandler movie.

“What exactly are we celebrating here?”

How did Sandler get to this point — making movies that don’t have to be good in order to “succeed”? The answer seems to lie in this eclectic set of seven films that fall into two rough sub-categories.

The first are the films that brought Sandler to prominence: “Billy Madison,” “Happy Gilmore” and “The Wedding Singer.” There’s a reason that his production company is named Happy Madison. Sandler was young and hungry, and his schtick was still relatively fresh — or at least it wasn’t 20 years old. When you watch the films, you can sense it: Sandler is trying. They are not necessarily great films, but they’re solid comedies. Some of the actors in these movies come from outside Sandler’s group of friends. There’s often an element of pathos in them. Sandler’s love interest is not several decades his junior.

In the other four films, Sandler has a lot of help. Sure, you could call “Spanglish” an Adam Sandler movie, but you could just as easily call it a James Brooks movie, or call “Punch-Drunk Love” a Paul Thomas Anderson or Philip Seymour Hoffman film, or call “Reign Over Me” a Don Cheadle-anchored movie, or call “Funny People” a Judd Apatow flick. Sandler is unselfish in these films.

Can Sandler be good? These flashes of collaborative brilliance suggest that the answer is “maybe.”

Sandler is a prisoner of his own device. The collaborative instincts responsible for his best work are not found in the vast majority of the products he produces. He surrounds himself with sycophants and Kevin James.

I’m not shocked that Sandler is churning out some racist, misogynistic schlock. Nobody is particularly surprised. After all, we’ve been buying it for years.