If it costs you less the next time you fill up your car’s gas tank, you may want to thank Mario Draghi and Janet Yellen.

Draghi, the president of the European Central Bank, announced plans Thursday to buy more than $1 trillion in bonds in an effort to revive Europe’s struggling economy. One effect of that policy is that it makes the euro weaker: The European Central Bank is essentially creating 60 billion euros a month out of thin air, creating a huge supply of new euros. The euro fell 2.1 percent against the dollar Thursday, to an 11-year low. (The euro had already been falling steadily against the dollar due in part to the weak European economy.)

Yellen’s Federal Reserve, meanwhile, recently wrapped up its own massive bond-buying program. How much credit that program, known as “quantitative easing,” deserves for the recent acceleration of the U.S. economy is an open question. But this much is clear: The Fed is no longer printing billions of new dollars every month, and the economy is doing better. Both have the effect of strengthening the dollar. The U.S. Dollar Index, which measures the value of the dollar against a basket of foreign currencies, is near a 10-year high.

What does any of this have to do with gas prices? Oil is traded in dollars, so when the dollar is stronger, it buys more oil — even if the underlying value of that oil hasn’t changed. To see how much of a difference that can make, look at the chart below, which shows the price of oil in dollars vs. euros. Over the past year, oil is down about 20 percent in dollar terms but only about 15 percent in euros. 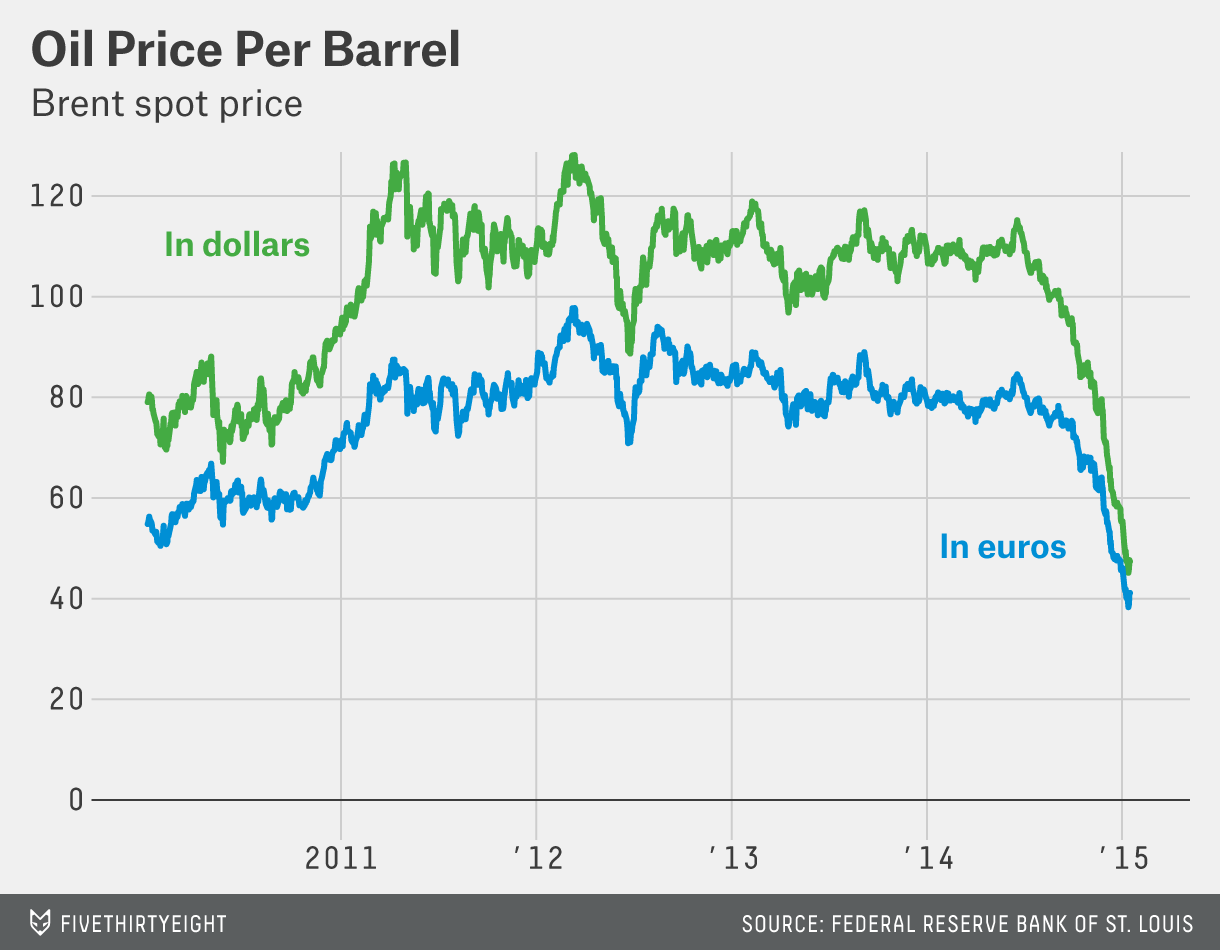 Now, two important notes here. First, the price of oil has fallen sharply in both currencies, so the appreciating dollar isn’t the only thing driving the drop. Second, the value of the dollar and the value of oil are interrelated. Rising U.S. oil production has pushed down the price of oil (because there’s more supply) and has also tended to strengthen the dollar (because we’re less dependent on imports). So, it would be overly simplistic to say that the rising dollar is causing oil prices to fall.

But Draghi’s policies are likely to keep putting downward pressure on oil prices, at least in the short term. In the long term, if his policies succeed in reviving the European economy, they will spur more demand for oil and, ultimately, higher prices. Not that anyone should be predicting oil prices.