One of the biggest efforts the Federal Reserve has ever embarked on — a $1.6 trillion bond-buying program to stimulate the U.S. economy known as the third round of quantitative easing — is coming to an end next month. Federal Reserve Chairwoman Janet Yellen will likely discuss it Wednesday, when she presents the Fed’s latest economic forecast. Economists will be discussing it for decades.

The program, which began in September 2012, has had its advocates and its critics. Advocates say the Fed’s massive intervention in the bond market helped create jobs and was an important signal to American consumers and investors that the economic recovery, which began in 2009, would continue. Critics, however, say the costs of the program weren’t worth the benefits — that the Fed’s intervention exacerbated economic inequality and created new bubbles in stocks and bonds, while adding few jobs. 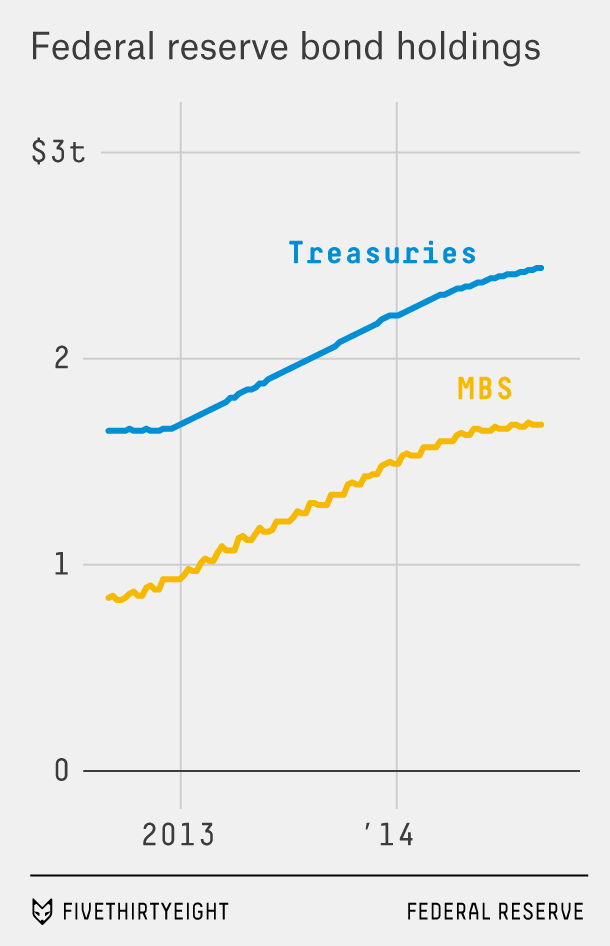 It’s too early to judge which side is right, but it’s still a useful exercise to review what has happened in the U.S. economy as the Fed has added $786 billion in Treasury bonds and $835 billion in mortgage-backed securities to its balance sheet.1

One of the chief goals of QE3 was to boost the labor market. Since the program’s launch, the unemployment rate has declined by 2 percentage points to 6.1 percent in August. If you include people who dropped out of the labor force because they were discouraged and people who are now working part time but would rather be working full time — a broader measure of unemployment called U-6 — then the unemployment rate has declined to 12.1 percent from 14.7 percent. 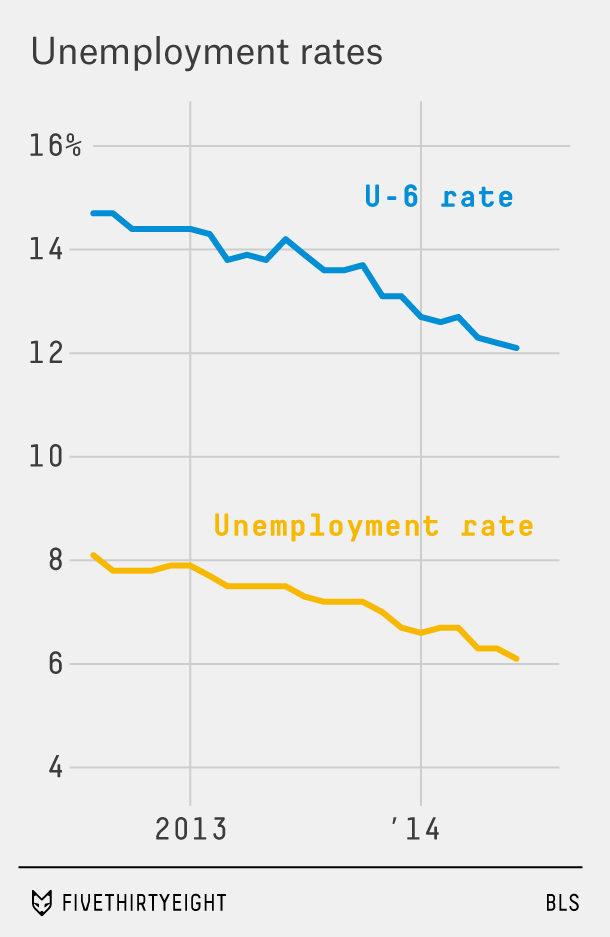 How does the Fed’s program of buying bonds boost jobs? The theory is that the Fed going out and buying a massive amount of long-term bonds drives down long-term interest rates. Lower interest rates encourage people to buy homes and cars and use their credit cards. They also compel companies to borrow more money, invest that money back into their businesses, and potentially hire more workers.

So what happened to interest rates over the course of QE3? 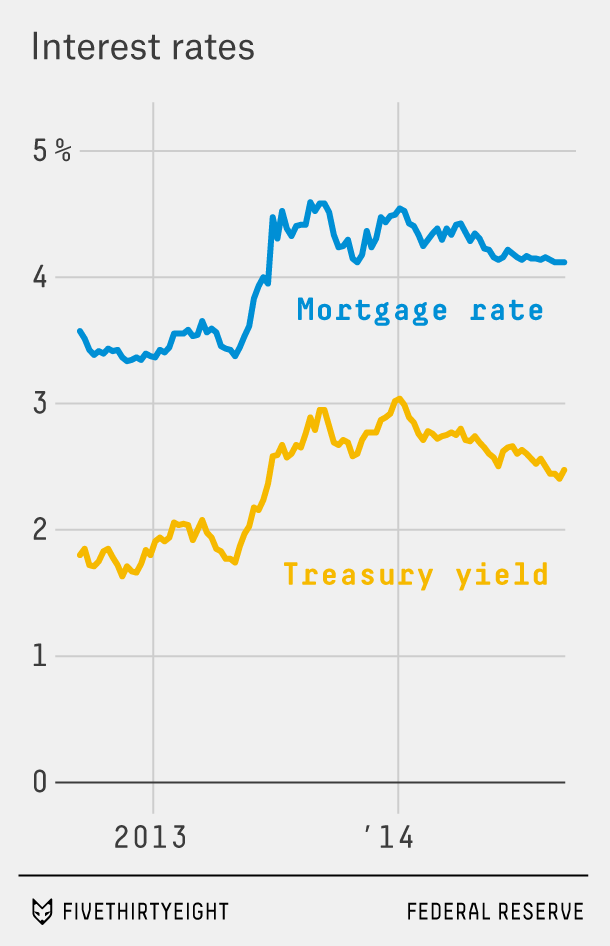 To some QE3 critics, this is evidence that the program has been a failure. Its supporters, however, say that higher interest rates often come with an improving economy.

QE3 may have also affected other rates. In 2012, consumers borrowed money from banks, mostly to buy cars, at an average interest rate of 4.9 percent. That rate had dropped to 4.5 percent as of May of this year. The average credit card interest rate also fell slightly during the same time period — to 11.8 percent from 12.1 percent.

Businesses have also benefited from lower rates during QE3. Evidence of this can be seen in the “spread” between companies’ cost of borrowing and Treasury yields. 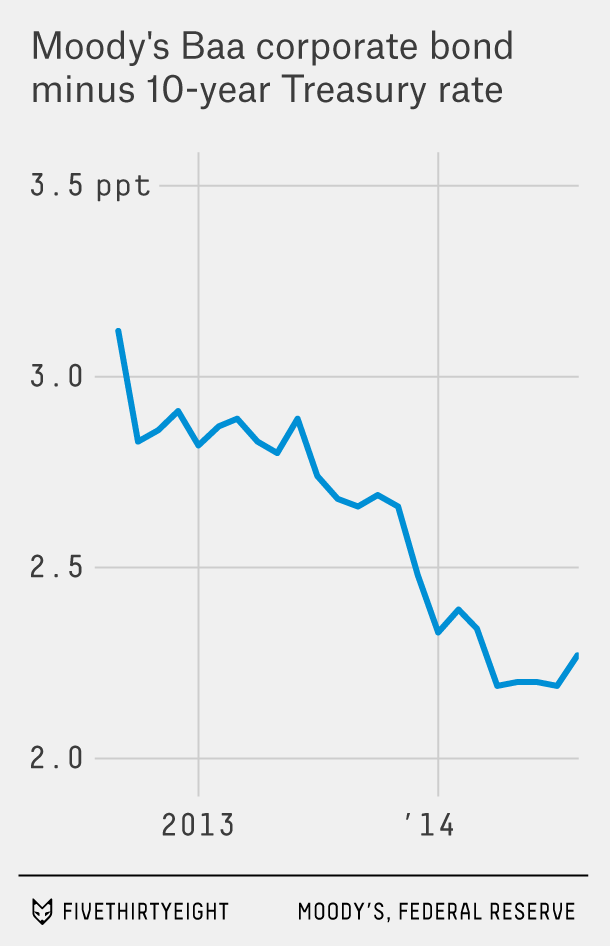 To advocates of the Fed’s program, lower interest rates and shrinking bond spreads are good news for the U.S. economy because they compel Americans to spend and invest. The program’s critics argue that these lower rates have encouraged investors to engage in speculative activity — whether in stock or bond markets — creating new “bubbles” that will come back to haunt the economy.

So did the lower interest rates compel Americans to spend and invest? It appears so. During the QE3 era, home sales, though volatile, have increased and automobile sales have soared. And the S&P 500 is up 38 percent since September 2012, above the long-run average. 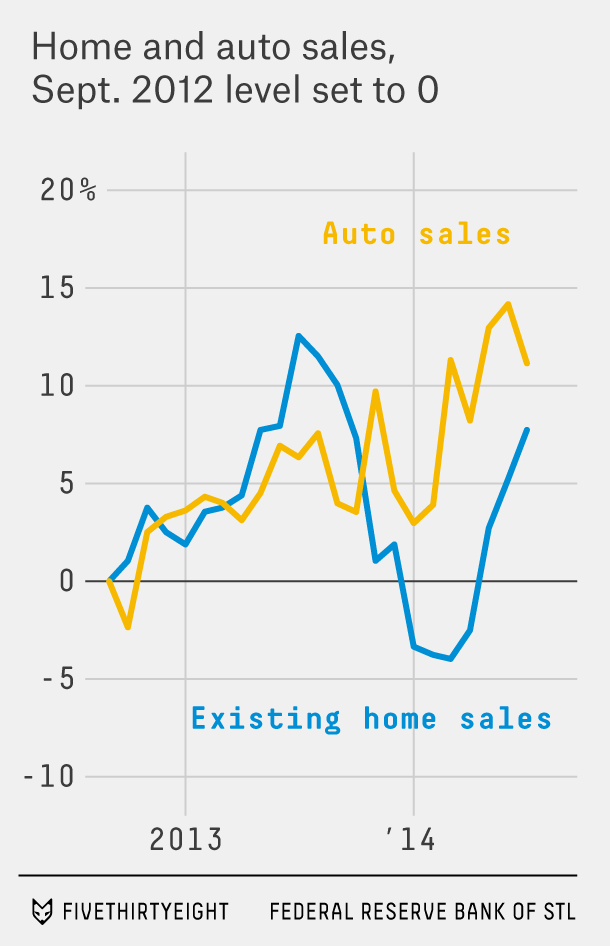 Amidst all this spending, how have household earnings fared? The latest Survey of Consumer Finances showed that the typical household’s income fell by 5 percent (after adjusting for inflation) from 2010 to 2013 — which covers all of QE2 and the bulk of QE3.

And economic inequality rose. Because the rich tend to hold a greater percentage of their assets in stocks, and stock prices rose, 2013 saw a widening disparity in wealth.

Critics of QE3 have also worried about inflation. With the Fed effectively printing money to buy $1.6 trillion in bonds, and all this money sloshing around, the prices of all sorts of goods and services could increase, and nullify whatever stimulative effect the program was supposed to have. However, inflation rates have barely budged and remain below the Fed’s 2 percent target, and inflation expectations are stable. This “inflation hysteria” has not materialized, QE3 supporters say; not yet, say the critics. 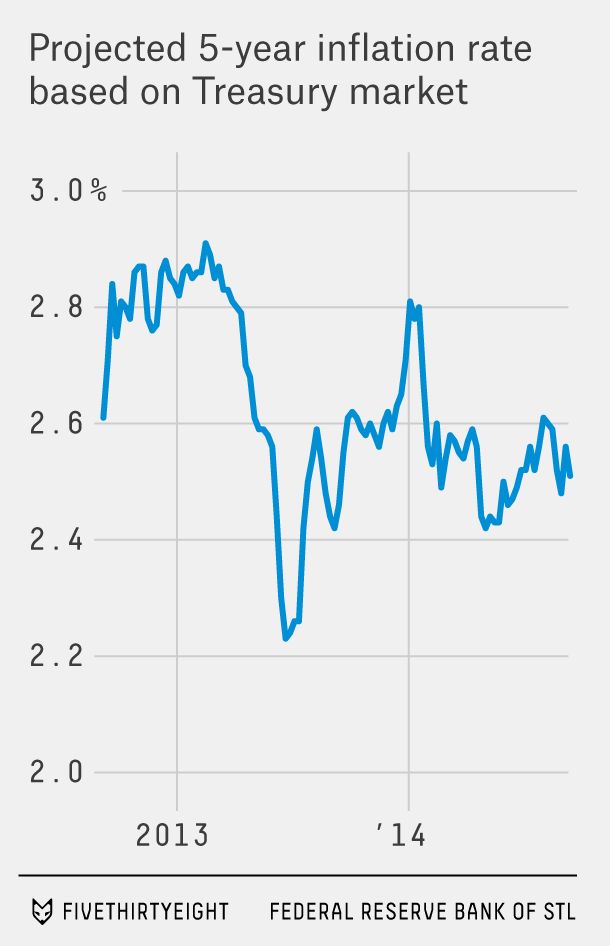 Up until now, much of the academic research examining the impact of the Federal Reserve’s quantitative easing programs have focused on the second round, QE2.2 Because QE3 has been ongoing, and the Fed never specified how much in bonds it would purchase at the outset, researchers haven’t been able to pin down exactly the quantity of the easing, so to speak.

Few economists doubt the economy is on better footing today than two years ago. But the debate over whether QE3 should get some of the credit for this improvement — or blame for festering problems that could plague us later — will undoubtedly continue to rage on.