In the aftermath of the 2008 financial crisis, economists debated whether the Federal Reserve should be involved — at all — in pricking bubbles. The housing bubble, and subsequent financial crisis, had led to a disastrous result: Hundreds of banks had failed and millions of Americans had lost their jobs. At the time, many still believed the emergence of future bubbles could only be prevented through financial regulation, and not through interest rate hikes.

Today, however, as interest rates remain at historically low levels and are expected to stay low at least into next year, there is growing concern among investors, economists and central bankers that a new bubble has emerged, and that increased regulation isn’t enough to stop it. Led by a powerful Fed governor, there’s a growing call for the Federal Reserve to raise interest rates to prevent this bubble from growing.

So what bubble are we talking about? It’s not the one you might expect.

Most of us worry about bubbles in housing and stocks because that’s what we own. But those markets are not really what worries the Fed the most. Central bankers are more concerned about the far bigger, but less sexy, bond market. That’s because a bubble exploding in this market could lead to another devastating financial crisis.

The Fed lowered short-term interest rates to nearly zero in 2008, and they have yet to budge. The Fed has even signaled that it plans to keep interest rates at very low levels “for a considerable time” after it ends its bond-buying program; and, as the economy gains momentum, it will refrain from raising rates “for some time.” Extremely low short-term interest rates have fed through to lower long-term rates, as seen in mortgage rates and Treasury yields.1 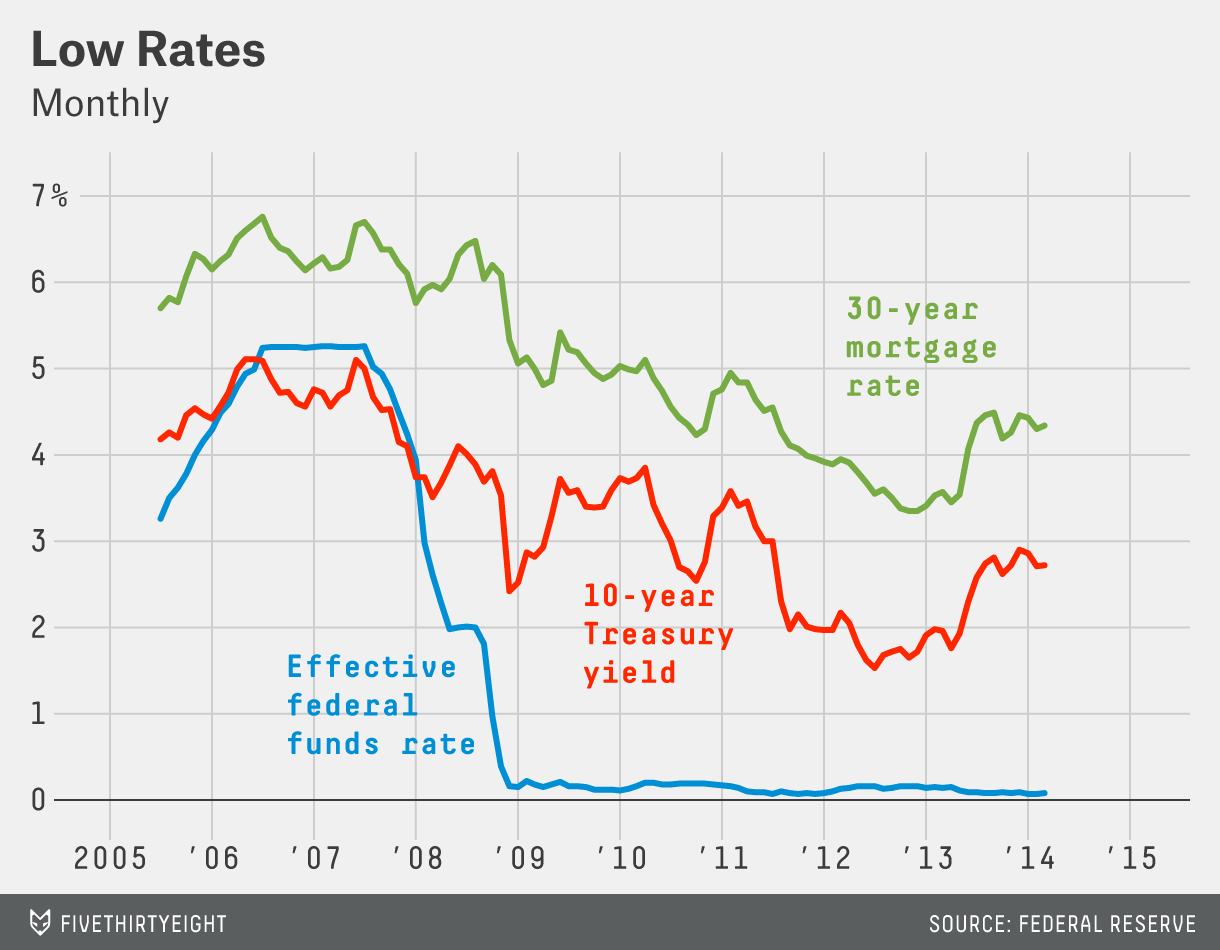 In this low-interest-rate environment, economists have been paying closer attention to bubbles. One in particular has led the charge: Jeremy Stein, a member of the Federal Open Market Committee, the Fed’s main policy-setting body.2 Stein joined the Fed as a governor nearly two years ago, with an impressive academic résumé. He was a professor in Harvard’s economics department whose research focused on financial economics. And while just this month he announced he is leaving the Fed to return to Harvard at the end of May, his impact on Fed policy is profound and will continue to have repercussions.

In his short tenure at the Fed, Stein argued that the central bank should respond to financial bubbles with monetary policy. In particular, two of his widely reported speeches stand out, one in February 2013 and the other last month.3 The more recent speech, with the wonky title “Incorporating Financial Stability Considerations into a Monetary Policy Framework,” garnered attention for its bold argument that the Fed should withdraw stimulus or raise interest rates, and thus tolerate a higher-than-normal unemployment rate, all to prevent the growth of a bubble — this time in the bond market, rather than in real estate or stocks.4

A key reason for the Fed’s lowering of short-term interest rates back in 2008 was to spur a recovery in housing. With home prices in free-fall and home sales plummeting, lower interest rates translated into lower mortgage rates.5 These lower rates helped soften the market correction following years of overbuilding and speculation-driven price increases.

Recently, housing has been a positive contributor to GDP growth. Nationwide, home prices are rising more than 10 percent year over year. But even though they’re rising at rates similar to the pre-crisis bubble era, home prices are still well below their pre-crisis peak. Also, the number of new and existing home sales, while greatly improved from the depths of the recession, is still low by historical standards.

All of this suggests to the Fed that there isn’t a bubble in housing at this time.

Furthermore, this year, there are already signs that growth in the housing sector may be slowing: The National Realtors Association’s Pending Home Sales Index is down 11 percent from a year ago. It seems likely the housing market has a while to go before the Fed would seriously consider raising rates to prevent another bubble there.

The stock market is a trickier story. It’s been booming in recent years. The S&P 500 index rose 32 percent last year alone. Some useful indicators comparing a company’s current stock price to its financial earnings or net worth, like the price-to-earnings ratio6 and Tobin’s Q,7 show there might be bubble-like behavior. Plotting a measure of Tobin’s Q — the ratio of the market value of all nonfinancial companies’ stock to their net worth — shows stock market valuation higher than the period before the Great Recession, but far below the tech bubble period of the late 1990s. 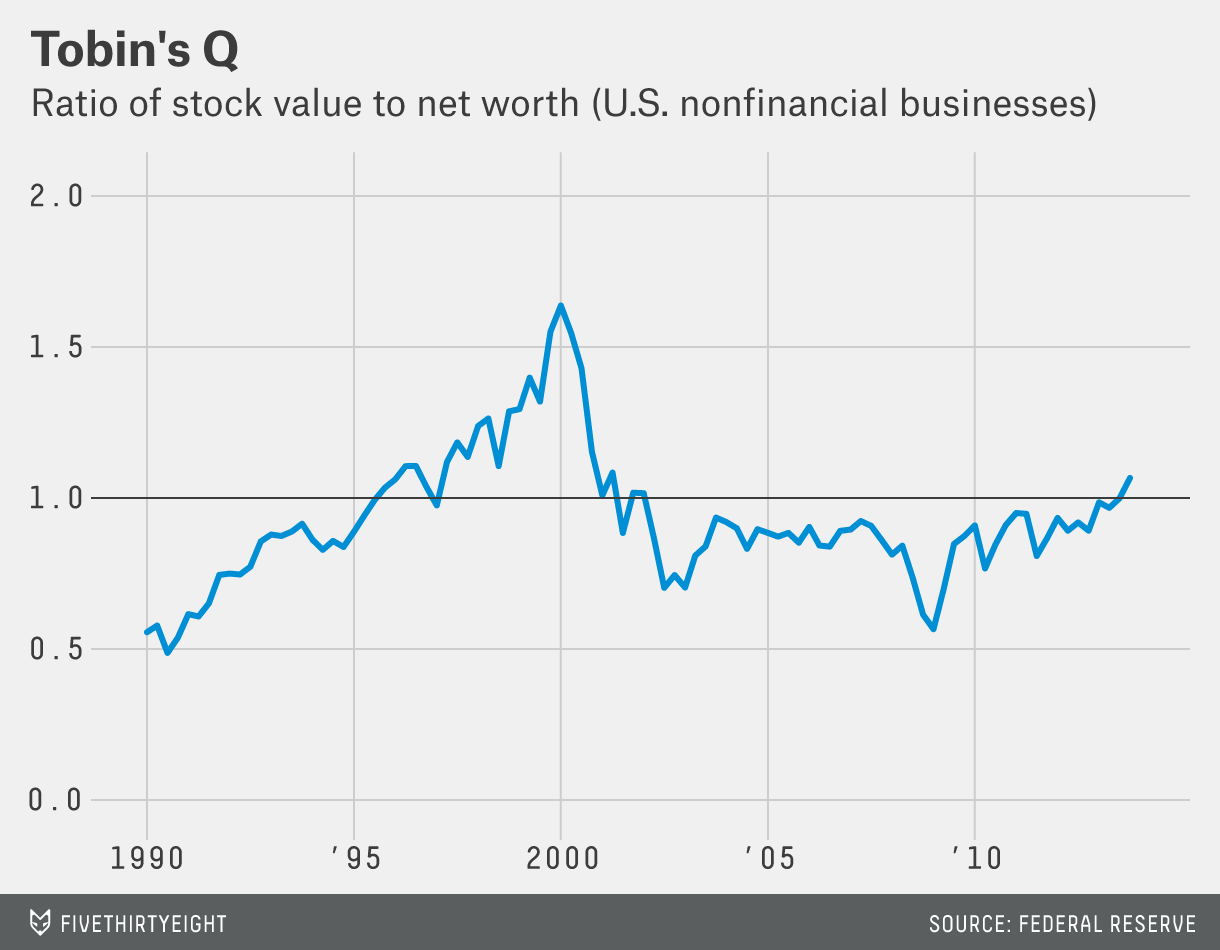 Does the Fed care about the bubble-like behavior in the stock market? Probably not. During the 1990s’ bull market and tech bubble, when Former Fed Chairman Alan Greenspan famously spoke of “irrational exuberance,” the Fed did nothing to slow rapidly rising stock prices. Why? Because the Fed can only control interest rates, which are an extremely blunt tool for affecting stock prices.

Instead, the Fed is looking elsewhere: at the bond market. That’s where Stein has been arguing there might be a real bubble.

The U.S. bond market totals nearly $40 trillion, according to the Securities Industry and Financial Markets Association (SIFMA), an industry trade group. This is far larger than the stock market, which stands at about $28 trillion.8 In addition to its greater size, the bond market is also more tightly linked to monetary policy, since the Fed’s control of interest rates affects all types of bonds.

What are the signs of a bubble in the bond market? Stein points to three things: first, the rising level of private-sector debt as a percentage of the U.S. economy; second, narrowing spreads between risk-free Treasuries and corporate bonds; and third, the growing proportion of corporate debt going to riskier companies, i.e. companies that have a greater likelihood of defaulting on their loans.

The U.S. has reached a new record when it comes to its private-sector debt. Nonfinancial companies have borrowed so much money that their debt level is now more than 55 percent of the country’s gross domestic product. 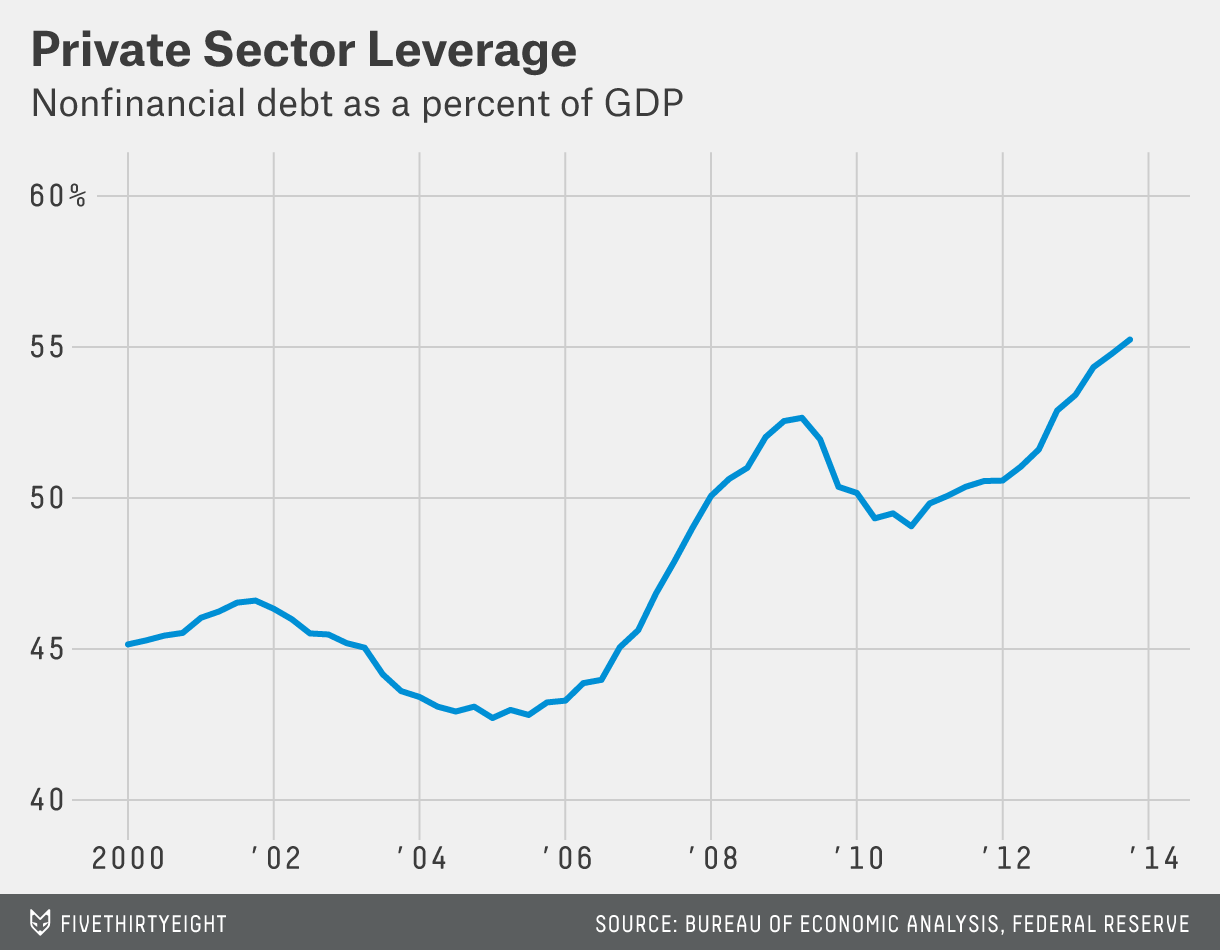 Let’s turn to the second sign. The fact that companies are able to borrow money at extremely low rates — just above the rate that the U.S. government can borrow at — suggests there are lots of banks, mutual funds and large institutional investors willing to lend money to these companies. Normally, this is a good thing. But over time, it encourages companies to take on a lot of debt. Lenders’ willingness to loan out money to companies at extremely low interest rates suggests they’re not accurately pricing the growing risk of default from these increasingly indebted companies.

Below is the credit spread between Moody’s Baa-rated corporate debt, which is a proxy of financially healthy companies, and risk-free Treasuries. These spreads rose dramatically during the financial crisis, when everyone was extremely risk averse and not willing to lend companies money, but have since resided to lower, pre-crisis levels. 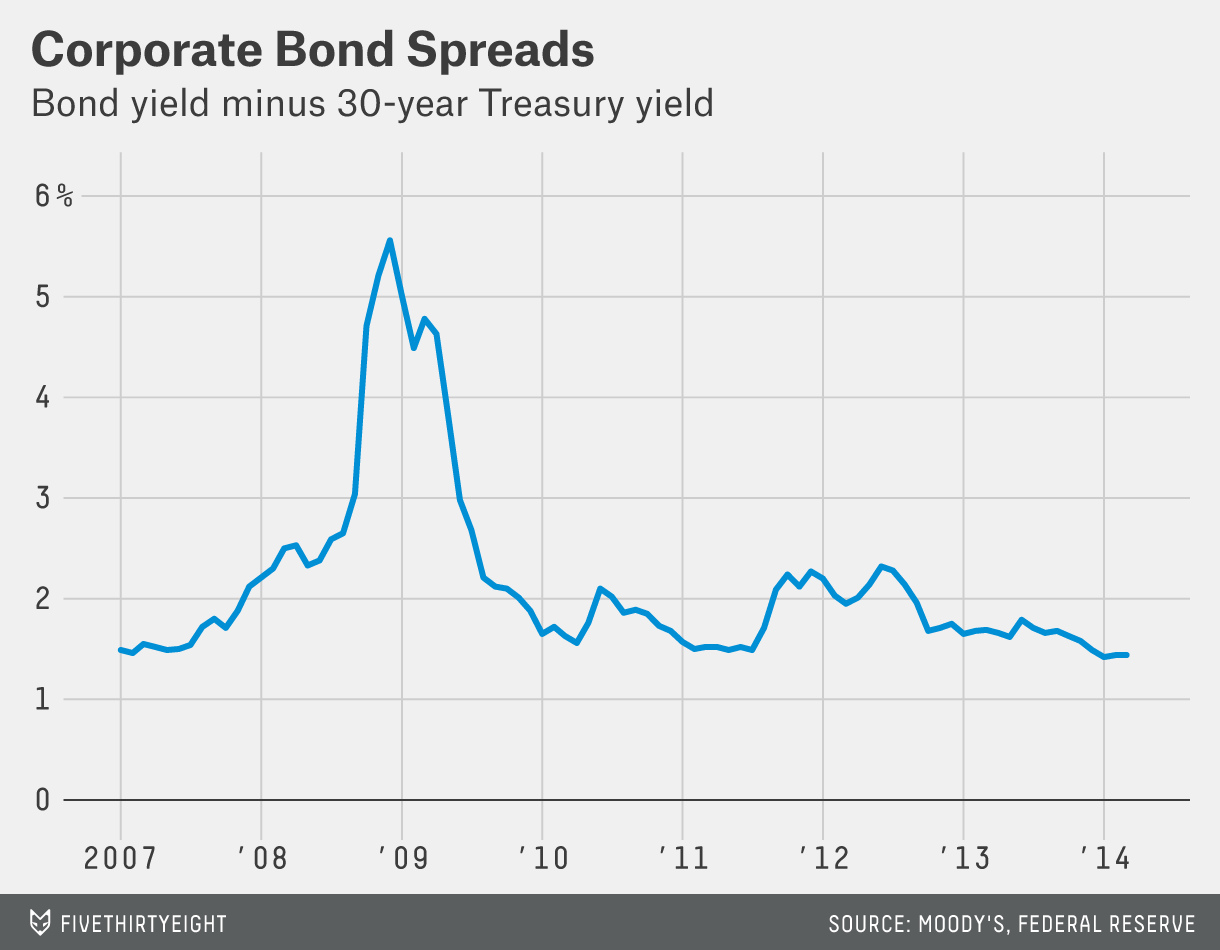 Finally, the third sign of a potential bond-market bubble — the growing proportion of corporate debt going to risky companies — is shown below. 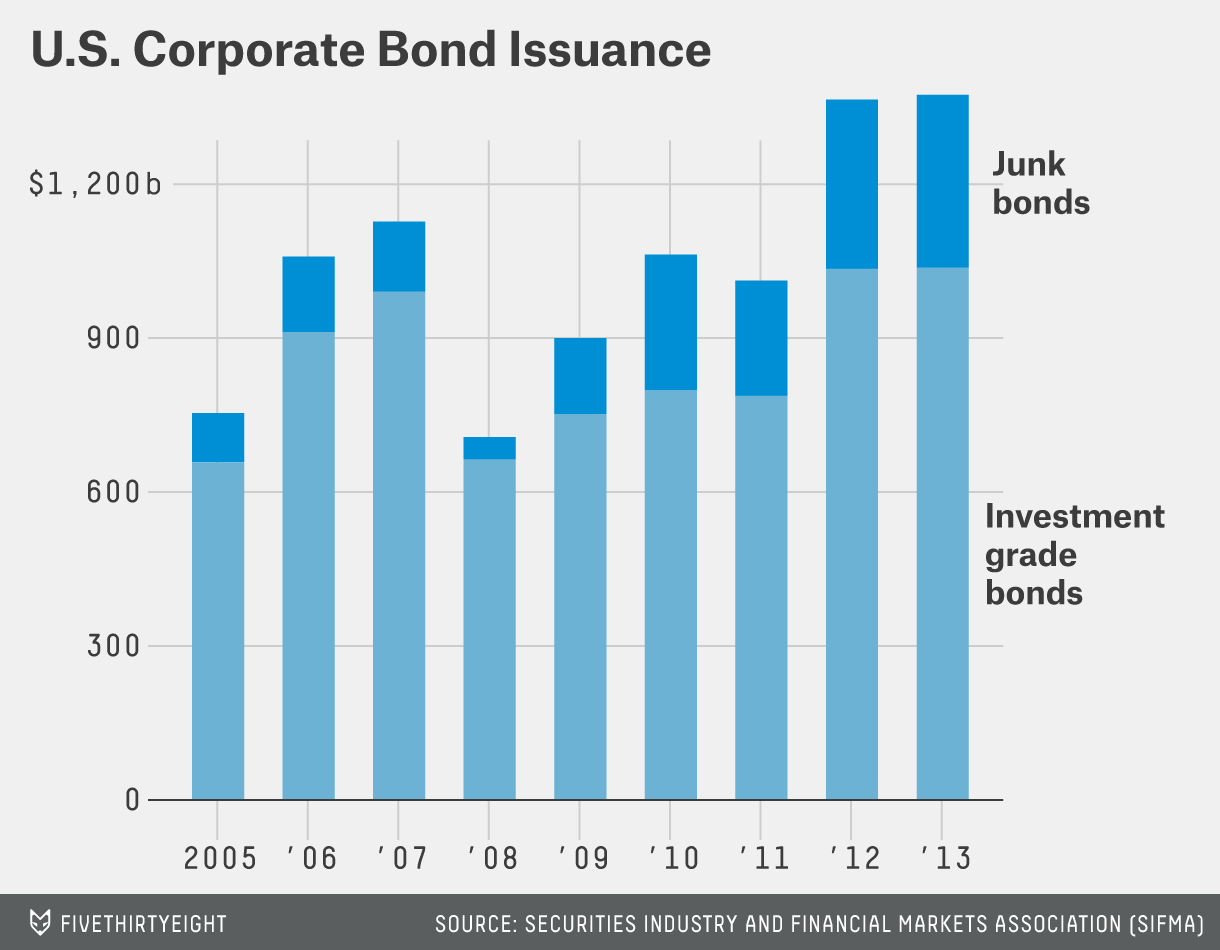 In this environment of low interest rates and narrow credit spreads, total corporate bond issuance has recovered and surpassed its pre-crisis levels. According to SIFMA, total issuance in 2013 was $1.3 trillion.

Perhaps more important for financial stability considerations, as Stein was keen to highlight, is the amount of “high yield” — or junk bond — issuance, which is a proxy for riskier corporate debt. In other words, companies borrowing at higher interest rates are typically companies that are at a greater risk of defaulting; perhaps the company in question is younger or operating with a risky business model or in a riskier industry. The amount of these riskier bonds issued in the market has risen to $336 billion, far exceeding pre-crisis levels.

Before the Great Recession, the Fed’s view was that bubbles couldn’t be identified before they popped, and that it was easier to clean up the mess afterward. Thus better financial regulation — whether higher capital requirements for banks, tighter mortgage origination standards, or tougher enforcement on the issuance of risky debt — was the ideal response to emerging bubbles. But is better regulation enough? Should the Fed lean against the wind of speculative fervor by raising interest rates to ward it off?

Until the recent crisis, the consensus was against this idea. But in the face of low inflation, and after more than five years of ultra-low interest rates, normally conservative central bankers could be itching to raise them. And given Stein’s influence on the FOMC, financial stability could be cited as the main justification for doing so.

In his departing speech, Stein argued that the Fed does, indeed, have a role and responsibility in preventing bubbles “that remain after regulation has done the best that it can do, given the existing real-world limitations.” If the Fed becomes convinced regulation alone is insufficient to prevent overheating in the bond market, rates could rise sooner than we expect.