The 2020 MLB season is barely a month old, and the trade deadline is already upon us. What’s often a delicate challenge in balancing risk versus reward under normal circumstances is made even more complicated this year by a shortened schedule, an expanded playoff format, reduced revenues with which to pay future salaries, and a lack of in-person scouting or minor-league baseball to assess prospects. All of that could make this the most bizarre trade deadline in history — if not exactly the most active.

We can’t promise a magic formula to help teams navigate the uncertainty of this year’s trade market. But we do have an algorithm to help identify which teams should be buying or selling. We call it the Doyle Number,1 and it represents how many future wins above replacement2 in talent (over the next six seasons) a team should be willing to give up in exchange for each win of talent added in 2020, in order to balance their total expected championships across each time frame.

A higher Doyle Number means a team should buy; for example, a Doyle of 2.00 means a team should give up two future WAR for each WAR they add now. A lower Doyle, on the other hand, means a team should sell; a Doyle approaching zero means there’s literally no amount of future talent that would make sense to sell for a win now. And teams around a Doyle of 1.00 are on the fence — maybe it makes sense to buy, maybe it makes sense to sell. This year, I updated our usual Doyle model to reflect both the shorter season and the larger postseason field — and as you might expect, the results give us a lot less certainty than usual about each team’s ideal strategy:

Generally, a Doyle Number above 2.00 would lead baseball — indicating a team with World Series aspirations so strong that they should be willing to give up double the future talent for each win added in pursuit of a current championship. And at each of the past two deadlines, three teams had a Doyle north of 2.00; the two years before that each saw two teams at 2.00 or higher. This season, however, no team checks in with a Doyle of 2.00: The Dodgers are highest, at 1.92 — a number that would have ranked fourth last year — followed by the Yankees (1.75) and Astros (1.67). So there are fewer truly overwhelming buyers this season, though that doesn’t mean there are fewer teams who could stand to improve at the deadline.

This year, there are 12 teams with a Doyle of 1.00 or higher,3 indicating teams who should probably be buyers in 2020. Contrast that with 2019, 2017 or 2016, when only seven teams had a Doyle of at least 1.00.4 Meanwhile, nine more teams have a Doyle between 0.47 and 0.99, inclusive — indicating teams that should probably sell but could buy if the price was right. With so many clubs in the playoff hunt at the deadline, there are a lot more teams than usual who can at least make the case for a big splash ahead of the stretch run. 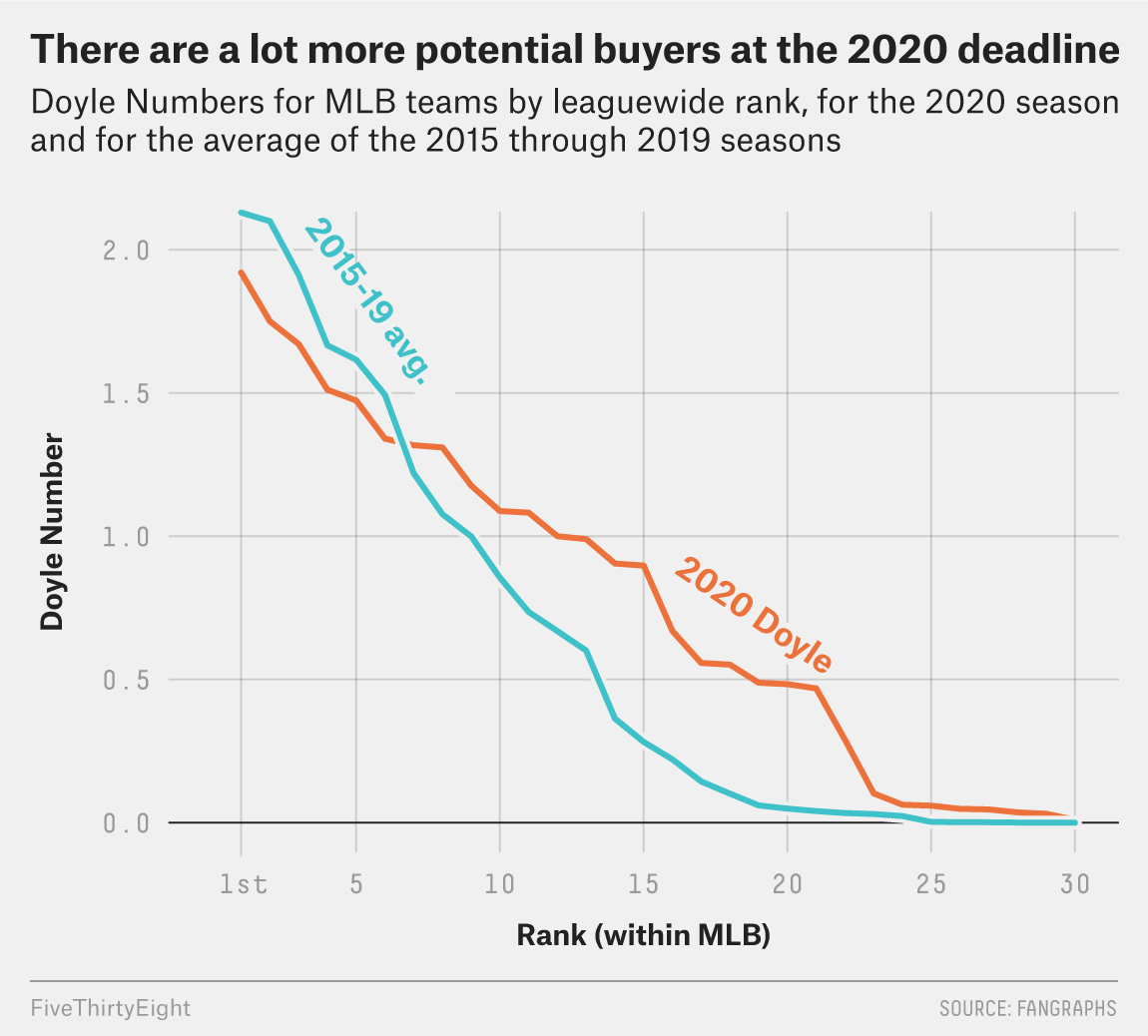 Just like the change in playoff format flattened out the championship odds across the league, so too did all of 2020’s peculiarities conspire to flatten out the distribution of Doyle numbers. That means each team faces a lot more uncertainty about whether to buy or sell, especially when it comes to the large middle group of teams on the fence about which strategy is best.

Right now, there are six teams that could come out ahead in terms of total expected championships5 if they either bought or sold at least 2 WAR of talent before the deadline: the St. Louis Cardinals, San Diego Padres, Chicago White Sox, Washington Nationals, New York Mets and Milwaukee Brewers. But different paths led them to that place: The Padres and White Sox are both outperforming expectations and have very good playoff odds but merely OK Elo ratings, meaning they could use talent injections to gear up for the postseason. The Nationals, Mets and Brewers, on the other hand, look good on paper but have gotten off to poor starts; they might benefit from either adding talent for a September playoff push or selling parts to reload for the future. (The Cardinals look solid on paper and have decent playoff odds, so they should probably only sell if the offer blows them away.)

Even the next tier of teams could potentially buy, though it would be risky. The Colorado Rockies, Toronto Blue Jays and Philadelphia Phillies are all close enough in the expanded playoff picture that, if they somehow swung a trade to add 8 WAR of current talent at a fair price, they’d come out ahead in terms of expected championships. But such trades might be impossible to find, and the team would be much more likely to come out ahead if they just sold that much talent instead. Philly, for example, could ship catcher J.T. Realmuto — around a 6-WAR talent — to a contender and reasonably expect a surplus of 11 extra WAR over the next six years, given how much more his current performance would be worth to a higher-Doyle team than to the Phillies.

(Note that other teams sometimes lumped among buyers, such as the surging San Francisco Giants, couldn’t conceivably add enough talent where Doyle would think it made more sense to buy than sell. Of course, Doyle thought the same thing last season!)

This is all well and good, in theory — Doyle does a good job of coldly identifying teams that would come out ahead in the short or long run by either buying or selling talent, assuming every team could find an appropriate trading counterpart. But will that be true this year? There are admittedly a lot of unusual obstacles to that in 2020.

Enough teams are in the playoff hunt that the number of potential buyers dwarfs the number of sellers, which will dramatically affect the trade market. And among the obvious sellers, there aren’t exactly many star names potentially on offer, unless the Red Sox are actually bona fide sellers . Add in the relative lack of knowledge about prospects this year, given there’s no minor-league season, and you could see MLB’s already risk-averse general managers being even more hesitant to pull the trigger on a deal this season.

So there are a lot of reasons for teams to keep quiet as the deadline approaches. (Mike Clevinger, arguably the biggest name available at the deadline, might be moved due to a night out partying in Chicago, rather than strictly baseball reasons.) Doyle says a lot of teams should be in the market to pounce this year if the offer is right, but that also means trading partners could be hard to find. Yes, the 2020 deadline is going to be weird, and it might even be a total dud — but would we expect anything else from this strange season?