The Blue Jays bought, the Tigers sold and the Mets couldn’t make up their mind. Baseball’s trade deadline, which passed last Friday afternoon, is all about balancing the present against the future. Whether they’re buyers or sellers (or just renters), all deadline-dealers have to evaluate both their World Series chances for the current season and where they will be in the “success cycle” going forward. Blunders in either type of assessment can haunt a franchise for years.

It’s a lot to deal with, and not every team manages the process perfectly. To help model these deadline decisions, we developed a metric we’ve nicknamed the “Doyle Number.” It’s named after the infamous 1987 trade in which the Detroit Tigers sent future Hall of Famer John Smoltz, then a 20-year-old prospect, to the Atlanta Braves for 36-year-old Doyle Alexander.

In principle, the definition of the Doyle Number is simple. It represents the rate at which, at the trade deadline, teams should be willing to trade talent in the future for talent in the current season in order to maximize the total number of World Series that it wins. For instance, if a team has a Doyle Number of 2, that means buying a win’s worth of talent in the current season1 at the trade deadline is worth giving up two wins in the future. By contrast, a team with a Doyle Number of 0.25 should only be willing to give up one-quarter of a future win for a win now. Not only should such a team not buy wins at that price — it should probably sell veteran talent at the deadline instead, in exchange for prospects.

The Doyle Number is calculated based on a team’s estimated “true talent,” a concept that’s equivalent to its projected winning percentage for the rest of the year, as of the trade deadline.2 The Doyle also includes the team’s odds of making the divisional playoff round.3 In practice, the calculation gets slightly involved, so we’ve reserved most of the methodological discussion for the footnotes.4

But it’s important to pay attention to that two-word phrase we used above: “World Series.” In Doyle, it’s all about the rings! A lot of previous analyses, including some that we’ve published ourselves, have focused on a team’s chance of making the playoffs. If that’s your main goal, you’ll eventually encounter diminishing returns: A team with 100-win talent as of the trade deadline is all but certain to make the playoffs, for instance, so adding more talent won’t accomplish very much. 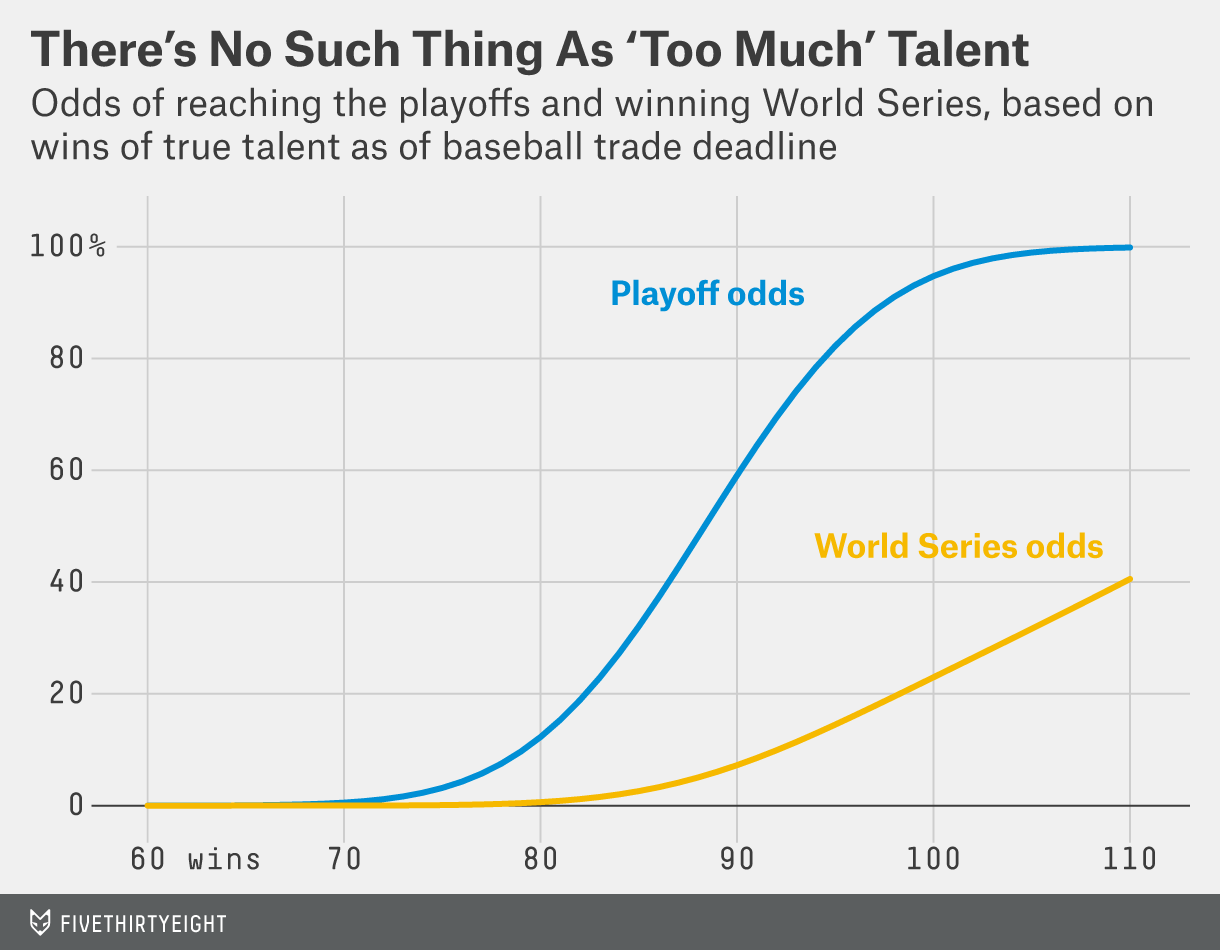 One of the biggest lessons of Doyle, in fact, is that adding the talent to win once you’re in the playoffs is probably more important than picking up enough talent to merely get there. The point at which adding an extra win of talent stops accelerating a playoff team’s World Series odds upward is about 118 wins — a level of true talent reserved for the best All-Star teams ever. Realistically, you can never add too much talent if you’re gearing up to win a World Series.

But let’s see how this plays out in practice. Below, we’ve listed the Doyle Number for the 30 major league teams as of the trade deadline last week. 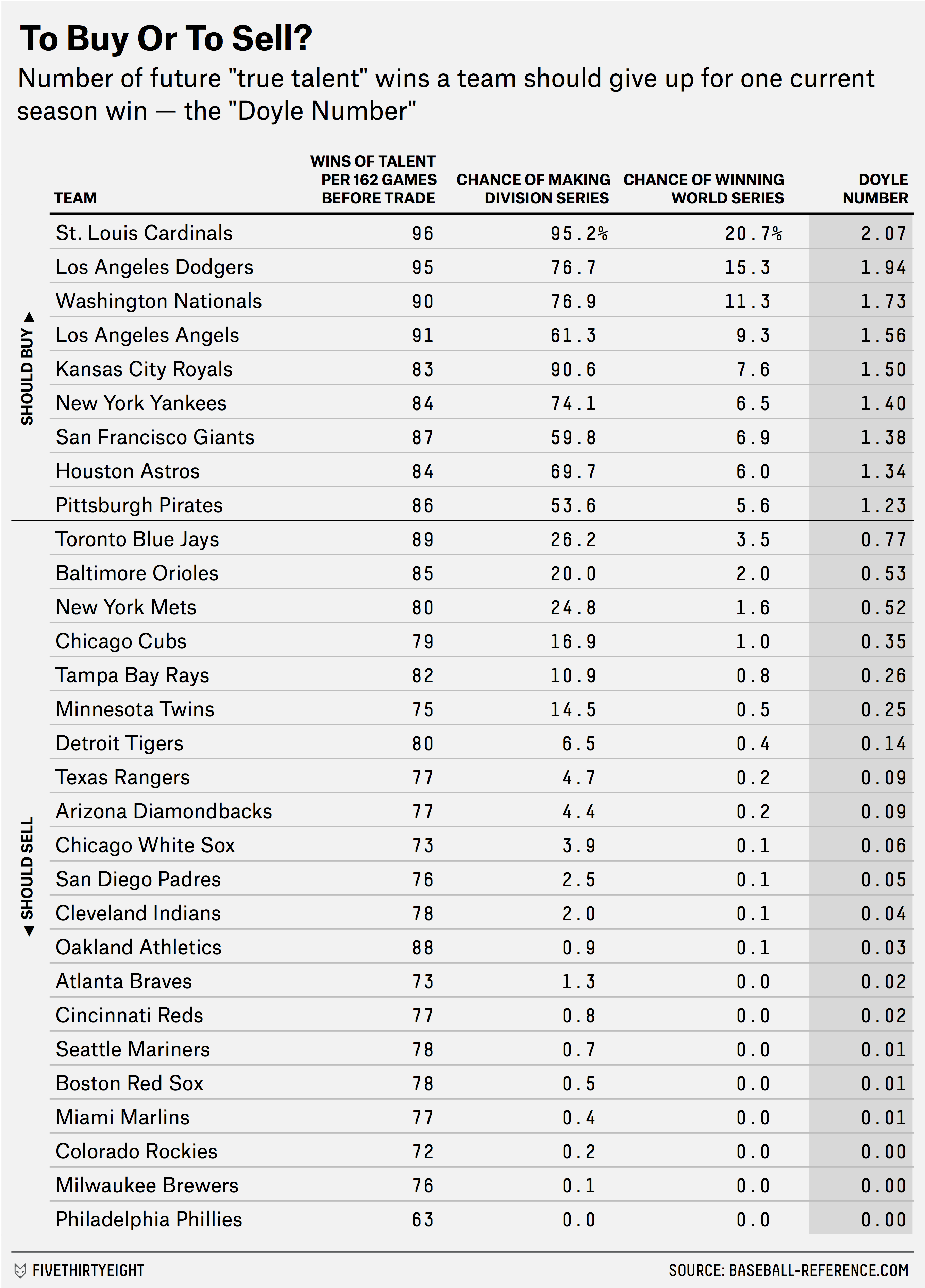 The highest Doyle Number (2.07) belongs to the St. Louis Cardinals, who are probably the best team in baseball, with more than 96 wins of talent and a 21 percent likelihood of winning the World Series. Even though St. Louis already had a completely stacked roster and a very high likelihood of making the division series without any trades, the increase in championship probability upon entering the MLB postseason would have made even a lopsided long-term trade worth it. The Cardinals should have been prepared to give away as many as two wins of future talent to get one win at the trade deadline.5

That the Cardinals (and the Los Angeles Dodgers and Washington Nationals) top the Doyle rankings runs a bit counter to the conventional wisdom, which says that less-talented teams have the most to gain from a big splash at the trade deadline. However, as long as a team’s Doyle Number is above 1, they’d be better off buying than selling. That’s why Doyle also would have recommended a classic buyer’s mentality for the Kansas City Royals, New York Yankees and Houston Astros — three teams that have found themselves in the midst of far better seasons than would be expected from their talent. This suggests the Royals were right to go for broke in the short term; for them, each marginal win of talent added in 2015 is worth forsaking about 1.5 wins of future talent.

Of course, while we’ve focused exclusively on trade-deadline buyers thus far, other teams had to decide whether they’d be better off selling current assets for future wins. The Philadelphia Phillies, to take an extreme example, have literally no use for extra talent in 2015 because they’re all but eliminated from the playoffs. Therefore, their Doyle Number was 0.00.

The Detroit Tigers had a Doyle Number of just 0.14, which would heavily recommend selling. In fact, the Tigers dealt stars David Price and Yoenis Cespedes at the deadline; it didn’t make manager Brad Ausmus happy, but Doyle was pleased.

Indeed, selling is almost always right for teams on the outer fringes of playoff contention (before the deadline, the Tigers had only about a 7 percent chance of reaching the divisional playoffs). The average team begins the regular season with a 27 percent chance of making the divisional playoffs. If a team’s playoff odds are lower than that as of the trade deadline, it should usually sell. 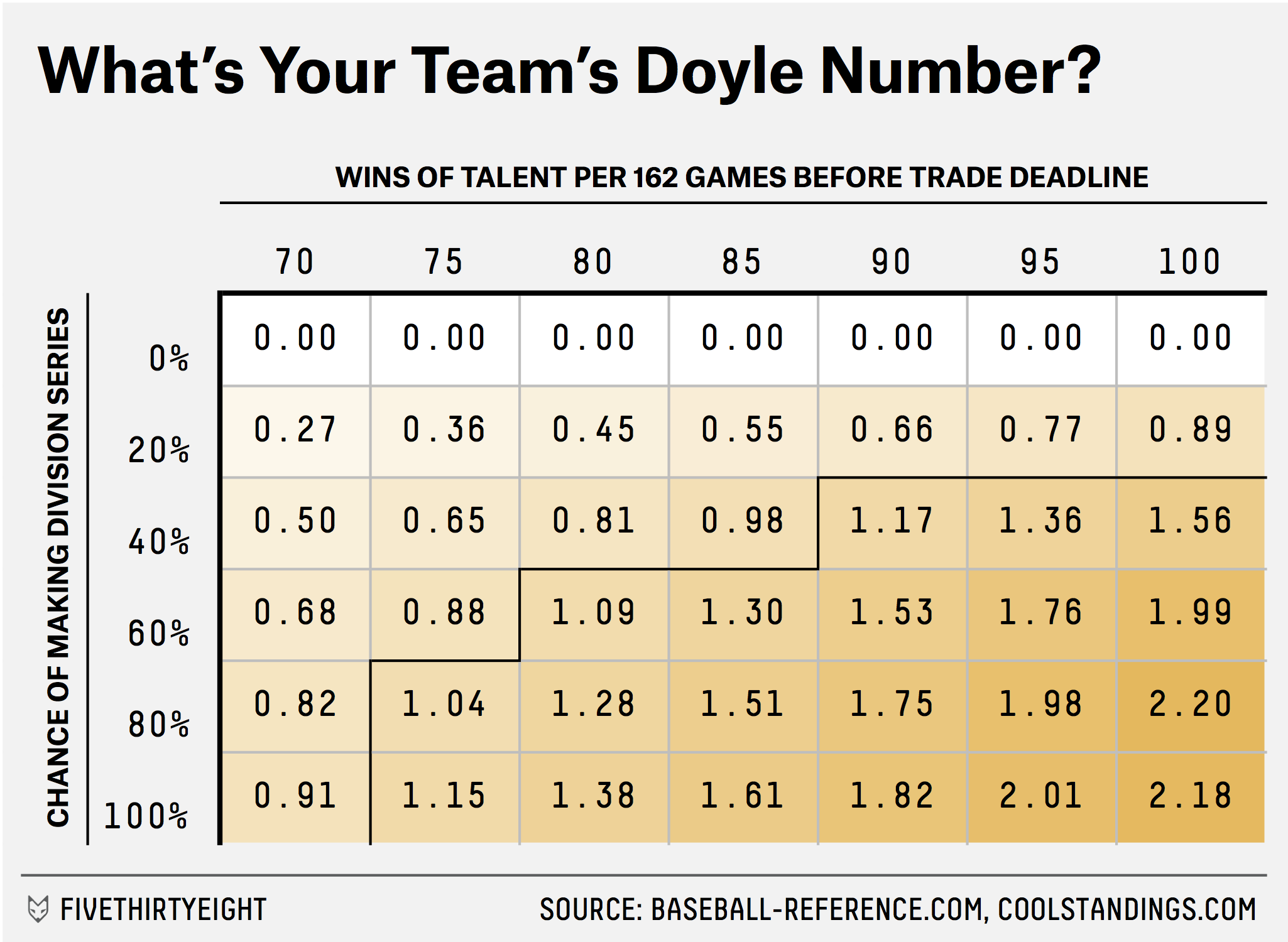 The in-between cases can be tricky, however. Despite having a talented roster, the Toronto Blue Jays entered the trade deadline with only about a 26 percent chance of making the playoffs. But they probably added the most talent at the deadline of any team in baseball in the form of Price and Troy Tulowitzki, sending numerous prospects packing.

Their Doyle Number of 0.77 is slightly below 1, which might initially suggest that they made the wrong move. In fact, however — and we’ve avoided introducing this complication until now — a team’s Doyle Number varies based on how many wins of talent it might add or subtract. Teams like the Blue Jays actually enter the trade deadline with a ‘U’-shaped curve like the one you see below. 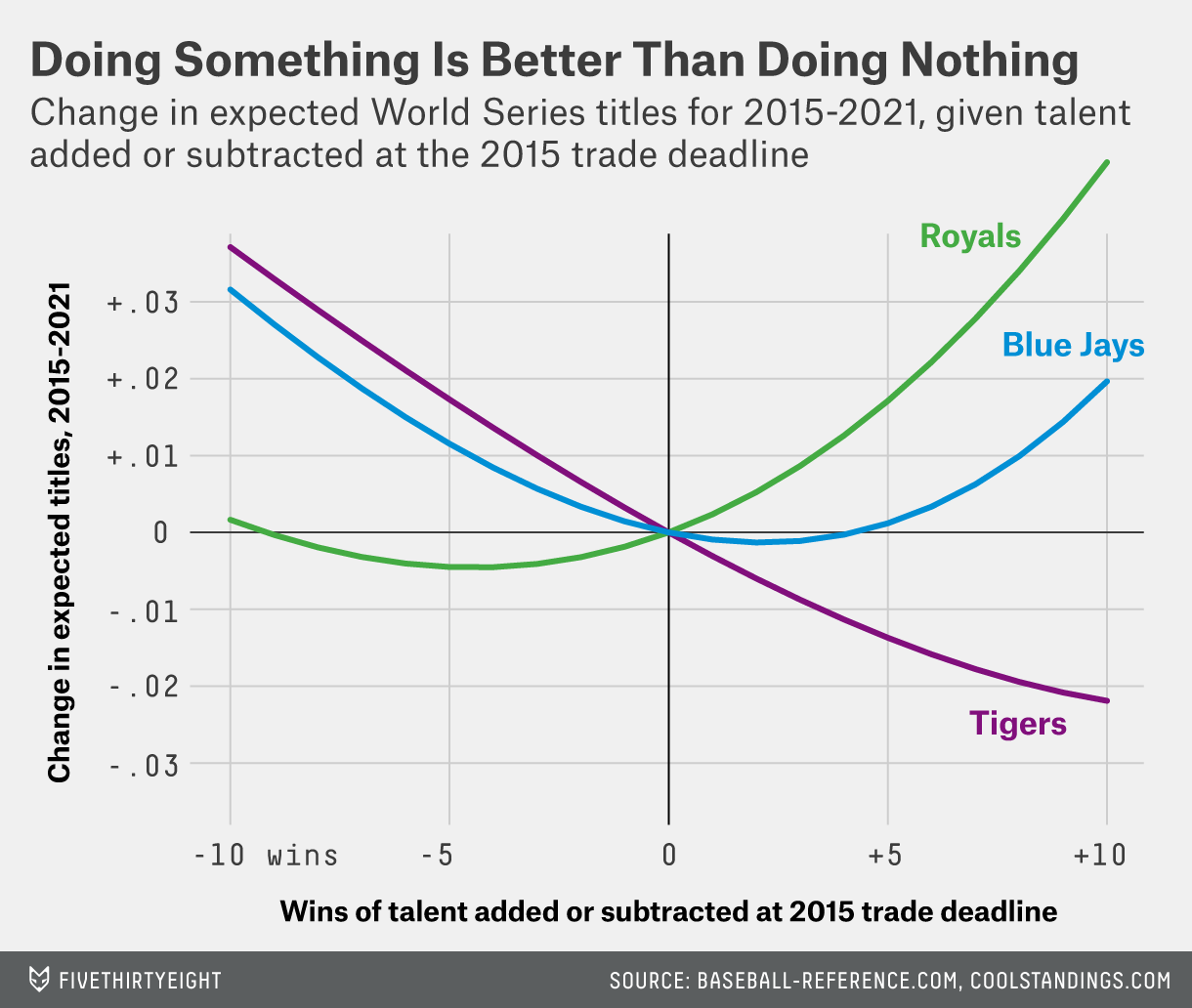 We know this is getting abstract, but it has a really important baseball implication. It means that for a team like Toronto, the worst strategy is standing pat. In terms of maximizing its total number of World Series championships, it should either add talent at the deadline or punt on the season and play for future years. By Doyle’s logic, in fact, teams should be going “all-in,” moving as aggressively as possible in one or the other direction at the deadline. Adding two stars, like the Jays did with Tulo and Price, is better than one.6 This also applies to the Mets, who, after getting cold feet on Carlos Gomez, eventually did deal for Cespedes. Doyle’s complaint might be that the Mets weren’t aggressive enough: They could have added a Cespedes for the rest of us and a star second baseman too!

The Doyle system admittedly represents a vast simplification compared with all the considerations that could be included in such a model. Future iterations might take into account factors like a team’s financial situation and the quality of its minor-league system, among other things.7 But it at least offers a broad set of guidelines upon which to judge a front office’s decision-making process.

While Doyle doesn’t vindicate every dubious decision — the Tigers had a 34 percent chance of making the playoffs on the date they traded for Alexander in 1987, which would have made for a close call — it suggests that teams should often be quite aggressive at the deadline. A team needs to be honest with itself about whether its World Series chances are legitimate, but if they are, it might never get a better chance at a championship.