It’s trade deadline week in Major League Baseball, and that means endless deliberation over which teams should buy talent to mount a postseason charge, and which should sell their stars with an eye to the future.

To help with that calculus last year, my colleague Nate Silver and I developed what we called the “Doyle Number.” At the trade deadline, a team’s Doyle Number is simply the rate at which it should be willing to trade talent in the future for talent in the current season in order to maximize the franchise’s total World Series wins. (It’s named for the Detroit Tigers’ 1987 trade that sent pitching prospect — and future Hall of Famer — John Smoltz to the Atlanta Braves for veteran Doyle Alexander, one of the most infamous examples in trading history of giving up long-term value for a short-term gain.)

A Doyle Number above 1.00 means the team is a buyer — it should be willing to give up more wins of talent in the future than it’s getting in the present, because a shot at the World Series this season is too good to pass up. (The Cubs, for example, have an MLB-leading Doyle of 2.01, meaning they should be willing to give up double the future wins for each win of talent they acquire in 2016.) Conversely, a Doyle Number under 1.00 means the team should probably be selling; current-season talent becomes less and less important the further a team is from the playoff picture. A Doyle of zero, reserved for hopeless playoff causes, essentially means there’s no amount of current-season talent that would make giving up a future win worth it. (You can read about how we calculate Doyle Numbers in more detail here.)

It’s important to note that our model simplifies the way deadline trades work. For instance, on the short-term side of the talent trade-off, Doyle is looking at the current season only — think of “rental players” in a walk year, rather than those who might stick with the club long-term. Deadline deals usually center around free-agents-to-be, which is why players like Jonathan Lucroy and Josh Reddick will probably be on the move this week — but they don’t always, so it’s something to keep in mind if your team makes a move that runs counter to its Doyle Number.

Here are the Doyle Numbers for all of this year’s teams, as of Monday morning:1

For those curious, the average Doyle Number across MLB is currently 0.62, well below the buy/sell cutoff of 1.00. That’s because our method is focused on winning the championship, which relatively few teams are in the hunt to do; it’s also a particularly top-heavy year in baseball. The implication is that most teams should stand pat, but there are some interesting exceptions — more on them later.

Also, it may seem counterintuitive for already great teams such as the Cubs and Nationals to rank so highly in Doyle, since the common archetype of a trade-deadline buyer is a team teetering on the edge of a playoff berth, desperately in need of an extra boost to join the postseason party. But as Nate and I found last year, that’s a bit of a misconception. If all we cared about was making the playoffs,2 then the model would indeed emphasize teams on the brink of contention. But since we’re focused on the rings, it’s more important for a top team to load up on firepower in preparation for a near-certain playoff bid than for a middling team to sneak into the postseason. Baseball’s playoffs are incredibly random, but adding more and more talent can help overcome that — long past the point at which it reaches diminishing returns in helping lock down a playoff spot. 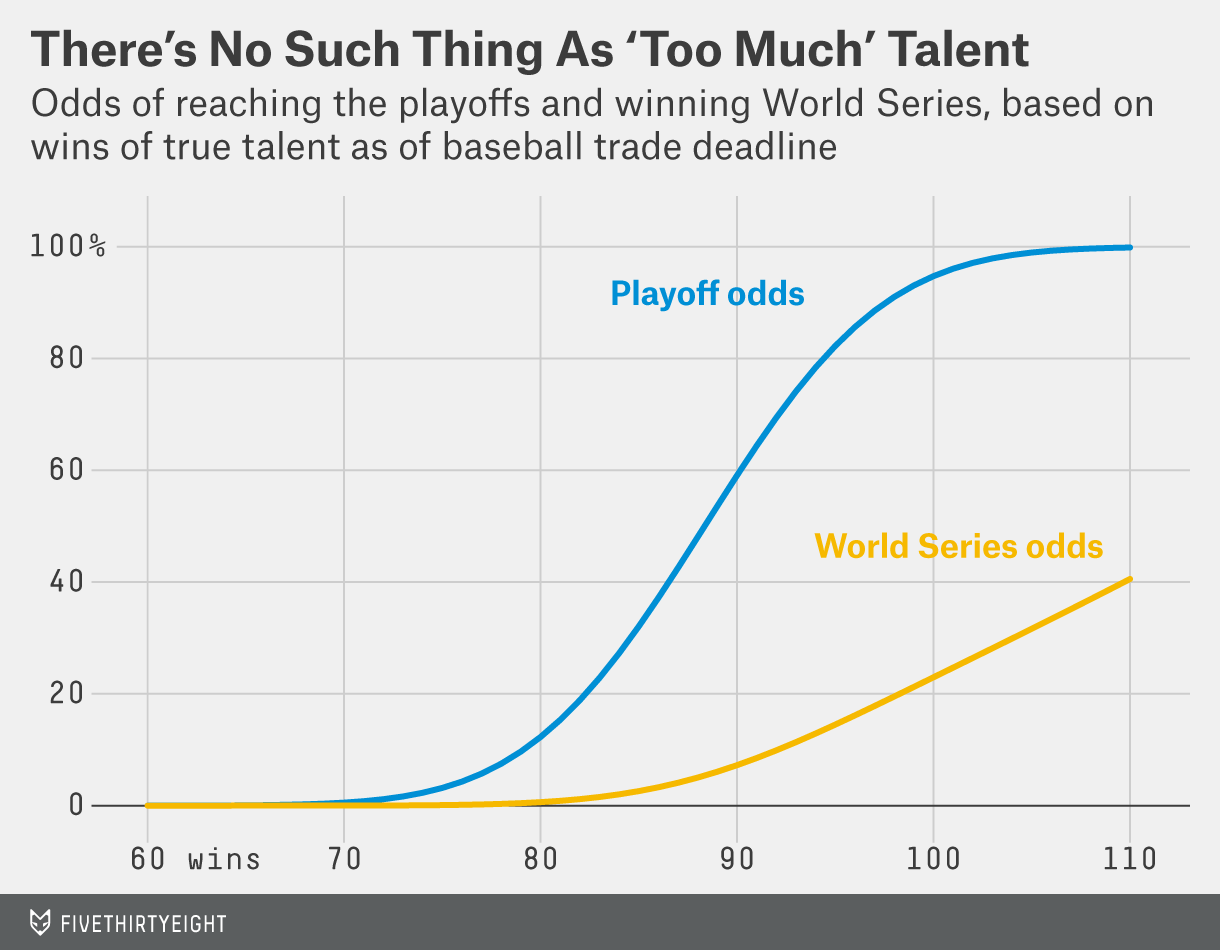 Of course, that doesn’t mean we should focus exclusively on the World Series front-runners this week. In fact, some of Doyle’s most interesting deadline inflection points belong to teams on the edge of the playoffs.

A team’s basic Doyle Number is just a starting point — the rate at which a club should be willing to accept or trade away talent can also change depending on how much talent is on the table. For teams caught between buying and selling at the deadline, this can create a U-shaped curve in their expected-championships function: they could ask for more future wins in exchange for giving away talent now, or they could just as easily be willing to give up more future talent in exchange for victories in the present.

The following seven clubs have a pronounced U-shape to their expected championship curve, depending on whether they buy or sell in the next week-plus:3

For teams like these, doing something — in either direction — is better than doing nothing. Standing pat means reaping neither the long-term benefit of selling nor the immediate dividends of buying. But knowing you have to make a move is the easy part; figuring out the best move, given both your own roster and the composition of the trade market, is a far more difficult task facing each team’s general manager this week.

It’s no coincidence that many of these cases involve teams whose division-series odds are mismatched with the talent on their rosters. For instance, the Marlins are one of baseball’s biggest surprise playoff contenders, and although they merely rate as an average team by our Elo rankings — typically the profile of the deadline seller — they’ve mostly been linked to rumors as a buyer this month. By contrast, the Astros, Cardinals, Mets and Blue Jays rank among MLB’s most talented teams, but they’re all in wild-card dogfights right now. None is likely to sell, but Doyle thinks they could be wasting an opportunity to build for the future by chasing a title this season.

At the very least, a method like Doyle can provide a framework for conceptualizing a team’s place on the buyer/seller spectrum. And it tells us that, with the playoffs quickly approaching, the top teams in baseball should spend the week trying to load up on talent for a World Series run. The MLB playoffs may be a crapshoot, but the trade deadline is a place where contenders can shift the odds a bit more in their favor — for a price.