FiveThirtyEight’s latest Senate forecast gives Democrats a 40 percent chance of maintaining control of the Senate. Still, you’ve probably heard that control might not be known until December (when Louisiana would hold a runoff election) or January (when a Georgia runoff would take place and when Kansas independent Greg Orman, should he win, would have to decide which party to caucus with).

But polling released over the past few days makes clear the most likely path the GOP would have to walk to win a majority Nov. 4 (or the early hours of Nov. 5).

Republicans need to pick up six seats. Let’s leave aside Louisiana, Georgia and Kansas for a moment.

The GOP has a 99 and 97 percent chance of taking back Montana and West Virginia, respectively. That’s two. My colleague Nate Silver wrote last week about South Dakota, where the three-way Senate race was starting to get crazy. A new Harper Polling survey put Republican Mike Rounds up 37 percent to Democrat Rick Weiland’s 33 percent to independent Larry Pressler’s 23 percent. Rounds has never trailed in a poll, and last week’s SurveyUSA survey had Pressler ahead of Weiland. If the anti-Rounds vote continues to split, it’ll be difficult for Rounds to lose. The FiveThirtyEight model still has him with an 87 percent chance of winning.

Those three look fairly solid (though South Dakota is less clear than the others).

Republicans have a 78 chance in Alaska (where a new Hickman Analytics poll put Republican Dan Sullivan up 5 percentage points) and a 74 percent chance of winning Arkansas.

Those two are far less certain, but let’s give them to the GOP. That’s five.

Both Colorado and Iowa appear to be tilting right. Our latest forecast gives the GOP a little under a 65 percent chance in both states.

In Colorado, Republican Cory Gardner has led in seven of the nine independent polls conducted over the past month. On Monday, SurveyUSA released two polls using two different sampling techniques — random digit dialing and registered-based sampling — that showed Gardner up 2 and 4 percentage points, respectively. Its prior poll in the Centennial State had Democratic Sen. Mark Udall up by 4 percentage points. Even if you think the polls are underestimating Udall’s strength because of a strong ground game, it’s hard to deny the trend in Gardner’s direction.

In Iowa, much was made over the weekend of a Des Moines Register survey showing Republican Joni Ernst’s lead dropping to from 6 percentage point, to 1 point, compared to the Register’s previous poll in mid-September. But that prior survey was an outlier. Since the Register’s mid-September survey, Ernst has led by an average of 1.6 percentage points, which matches the current FiveThirtyEight forecast. Ernst has led by a percentage point or more in five of the past eight non-sponsored surveys (including a new Rasmussen Reports poll putting her up 3 points) and only trailed by a point or more in one.

Give Republicans both Iowa and Colorado for the moment. The GOP has gained seven seats. They only need six, but to be guaranteed a Senate majority, we need to be sure Democrats won’t sweep our potential late deciders: Kansas, Georgia and Louisiana. (It’s very unlikely Republicans would win Iowa and Colorado but lose ruby-red states like Kansas and Louisiana, but still.)

So the GOP needs to win one of the three late deciders on election night.

Lousiana is very likely to go to a runoff, in which Republican Bill Cassidy has a 74 percent chance of winning. So an instant-gratification GOP Senate majority will probably require winning in either Kansas or Georgia.

The FiveThirtyEight model currently projects Republican David Perdue to win 50.0 percent of the vote in Georgia. Perdue, who has a 72 percent chance of winning, may not avoid a runoff because of Libertarian Amanda Swafford, as I’ve written about.

In Kansas, Republican Sen. Pat Roberts faces a strong challenge from Orman. Orman, though, may have peaked too soon. Roberts recorded his first lead in two polls released last week, and a new Public Policy Polling (PPP) survey puts Orman only up 3 percentage points. That’s down from a 10 percentage-point lead in PPP’s two prior polls. FiveThirtyEight still gives Orman a 58 percent chance of winning, but the race appears to be trending back toward the fundamentals (i.e. Kansas is a red state), and the GOP has a large advertisement advantage heading into the final few weeks of the campaign.

The most likely scenario in which we know Nov. 5 that Republicans will control the next Senate requires a GOP sweep of Montana, West Virginia, South Dakota, Alaska, Arkansas, Colorado and Iowa, and then a win in either Kansas or Georgia.

That path might be relatively clear. But it’s also relatively unlikely. Prepare to be patient. 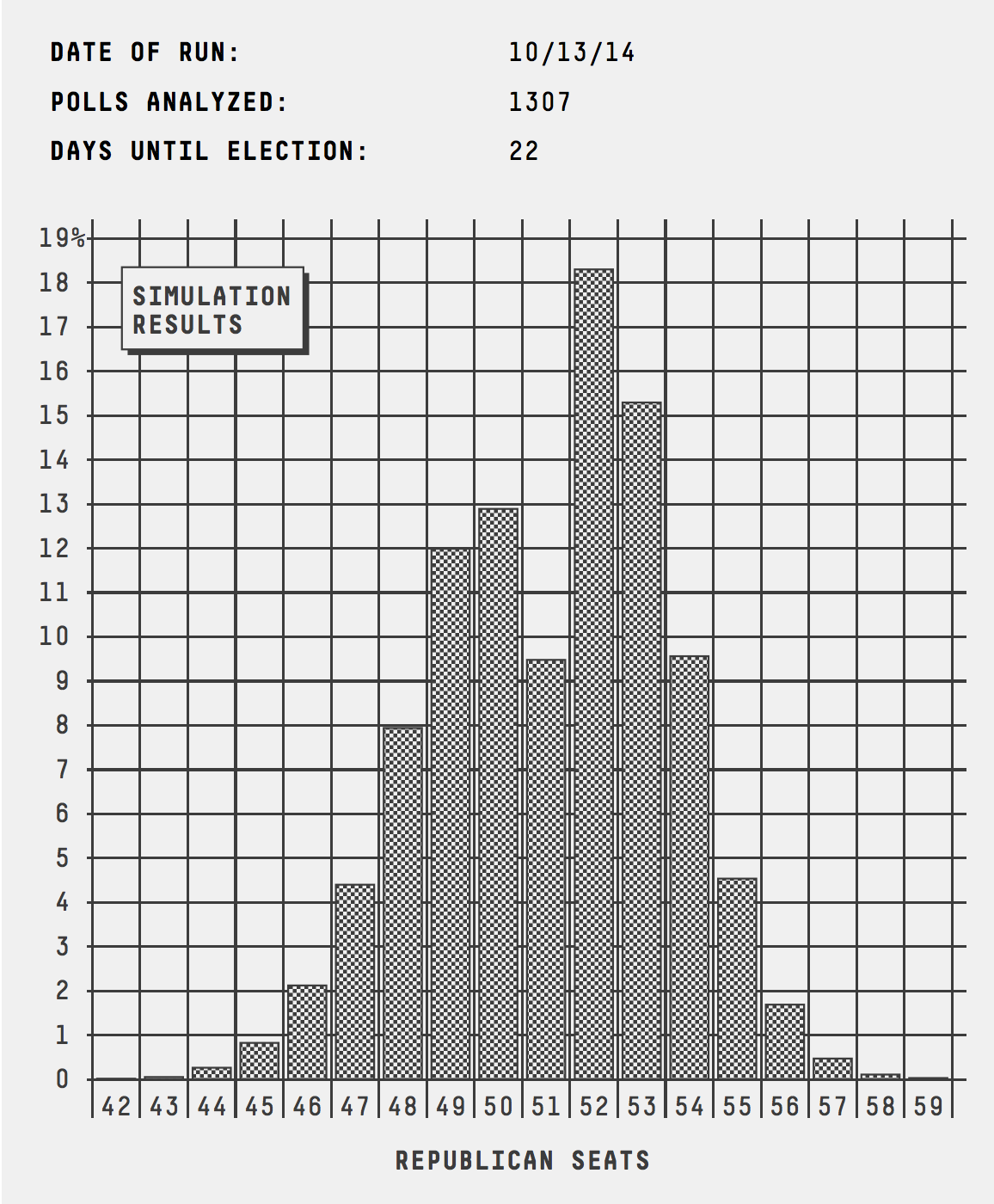