Our Hall of Pretty Damn Good Players is a space for all of those great players from history who, for whatever reason, won’t make their sport’s official Hall of Fame. That can be because the player was underrated or exceled in an aspect of the game that wouldn’t be fully appreciated until years later. But that doesn’t always have to be the case. Today, it’s time to focus on a pair of baseball players who will always be linked by history — but who have also seen their Cooperstown chances evaporate because they played central roles in one of MLB’s most notorious scandals.

As detailed in ESPN’s recent documentary “Long Gone Summer,” Sammy Sosa and Mark McGwire will forever be remembered for their parallel bids to break Roger Maris’s 37-year-old single-season home run record during the summer of 1998. Though McGwire eventually got the better of Sosa that year, both players did wind up surpassing Maris’s record by season’s end. And despite losing the HR duel, Sosa was named National League MVP, in large part because his Chicago Cubs made the playoffs (6½ games clear of McGwire’s St. Louis Cardinals, who didn’t). Their rivalry was both competitive and friendly; although its importance in helping baseball recover from the 1994 strike is often overstated, the home run chase was a genuine phenomenon.

In that moment, McGwire and Sosa had become sports icons on nearly the same level as Michael Jordan. Of course, we know now that their accomplishments were aided by admitted or reported steroid use — an unavoidable truth that will likely keep both out of the Hall of Fame forever. But as is the case with all players from the Steroid Era, that doesn’t mean we can’t also assess their performances relative to the environment in which they played. And by that standard, Sosa and McGwire’s preposterous numbers deserve our appreciation.

Both men had seen their whole careers lead up to that special 1998 season. Sosa was signed as an amateur free agent out of the Dominican Republic in 1985, bouncing between the Texas Rangers and Chicago White Sox with little success (1.3 wins above replacement1 in four seasons) before finally breaking through in 1993, his second year with the crosstown Cubs. He blew through his first 20-homer season that year, finishing with 33, and crossed the 40-homer threshold in 1996. He also compiled 21.4 WAR in a five-season stretch from 1993 to 1997. But few would have predicted the kind of record-chasing performance Sosa ended up putting on in ’98.

McGwire, for his part, had long established himself as perhaps the game’s premier power hitter — when healthy. He led his league in home run frequency (per at bat) five times from 1987 through 1996, launching a dinger once every 12.4 at-bats over that span. Before being traded to St. Louis in 1997, McGwire’s gargantuan homers with Oakland were already the stuff of legend:

But he also missed an average of 59.4 games per season from 1992 through 1996, sitting out with a variety of foot injuries. McGwire did recover enough to crush 110 total home runs in ’96 and ’97 combined, though, setting the stage for a colossal year in 1998.

Neither McGwire nor Sosa would disappoint. The Cardinal first baseman homered in four straight games to start the season, kicking off an early stretch in which he’d hit 27 by the end of May. Sosa started slower, with just six homers through April and 13 through May, but in June he set MLB’s all-time record for most home runs in a single month with 20 — a record that stands to this day. By the end of the month, Sosa (33 homers) had vaulted himself into the race alongside more established names like McGwire (37) and Ken Griffey Jr. (33). 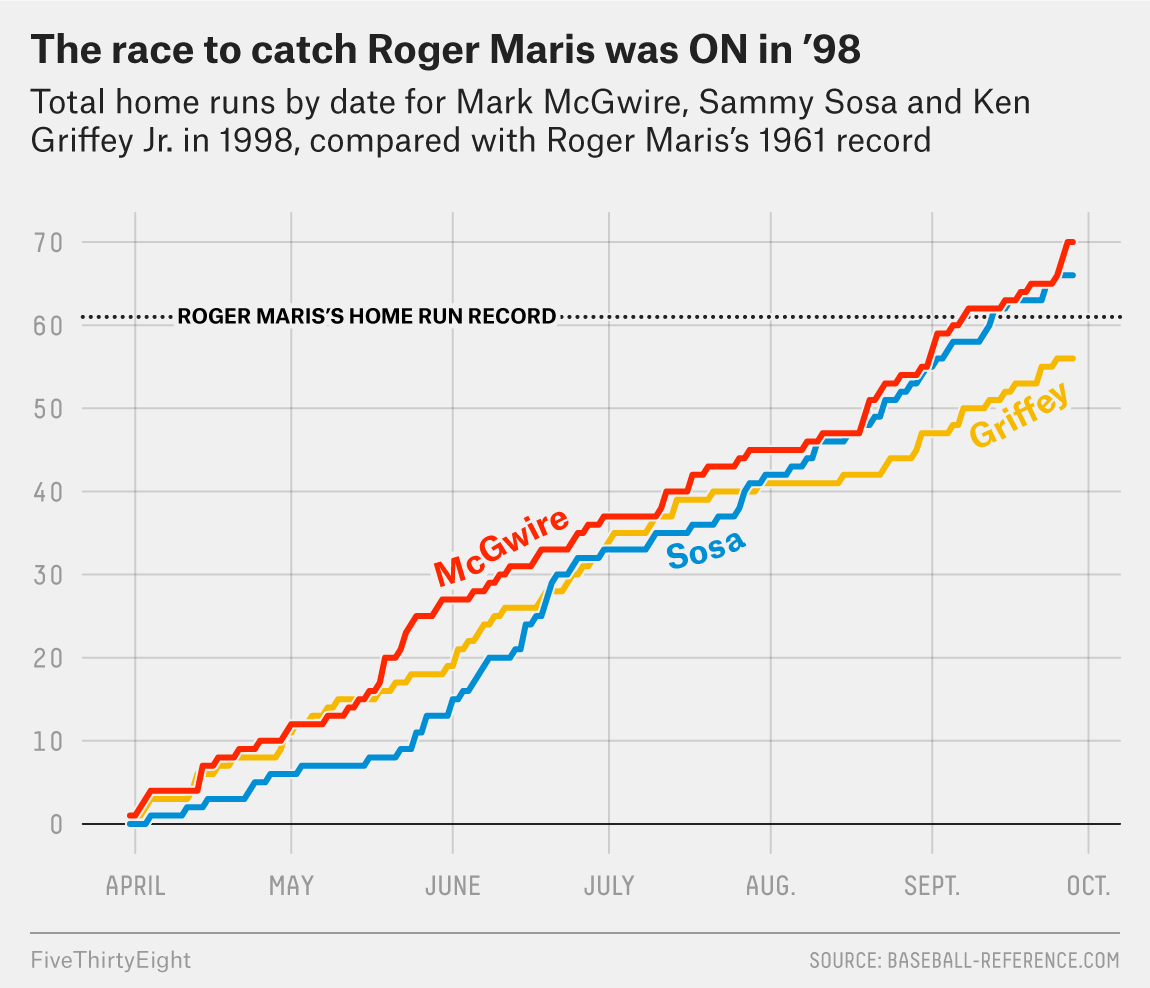 From there, the chase for Maris was on. Sosa beat McGwire 9-8 in July, and on Aug. 10, the Cubs’ right fielder belted a pair of homers to finish the day tied with McGwire at 46. McGwire reclaimed the lead the next day, and the two began pushing each other to new heights as the summer continued. A disappointing August (six HRs) saw Griffey fall out of the race, but both Sosa and McGwire cracked double digits in the month, and the pair ended August tied at exactly 55 home runs — six behind Maris with a month to go.

A furious stretch of five homers in the first four games of September brought McGwire within one of Maris (with 60 HRs to Sosa’s 58) when — of all teams! — Sosa and the Cubs arrived in St. Louis for a two-game series on Sept. 7. That afternoon, McGwire tied Maris’s record; the next night, he broke it.

And yet, the home run chase was not over! With McGwire camped on 62 homers for the next six games, Sosa blasted four more home runs to tie the new record himself, and the two kept pace with each other over the next 12 days, each hitting four more homers. Sosa even briefly led McGwire, 66-65, on Sept. 25 before McGwire tied him later in the evening. From there, McGwire would hit four more (while Sosa was held homerless) to win the single-season home run crown, 70-66.

It was a checkered era, but for better and for worse, McGwire and Sosa were the faces of it.

One of the benefits of sabermetric analysis is that it allows us to compare players across history by looking at their stats relative to the eras in which they played. And while Sosa and McGwire were arguably the central characters of the Steroid Era — legend has it that their record chase in ’98 even pushed Barry Bonds to seek performance enhancements and reclaim his status as baseball’s biggest star — they also stood out within it. McGwire’s career adjusted on-base plus slugging (OPS+) of 163, which accounts for leaguewide averages, is tied for 11th in MLB history. Sosa’s is a bit lower — tied for 197th with a 128 OPS+ — but he was more valuable defensively and had the higher peak value, with more WAR in his seven best seasons than McGwire had.

So, by the numbers — whether conventional or WAR-based — Sosa and McGwire should have had solid Hall of Fame credentials. According to our method of translating traditional qualifications into a Hall of Fame probability,2 Sosa’s Cooperstown odds would be 89 percent and McGwire’s 59 percent. According to JAWS, an average of career and peak wins above replacement,3 Sosa would rank higher than just under 48 percent of right fielders already in the Hall (since 1901); McGwire would rank higher than just over 41 percent of first basemen.

But of course, the dark cloud of steroids hung over each player’s candidacy. McGwire never garnered more than 23.7 percent of the vote in any ballot, dropping off in 2016 after 10 appearances. Sosa just picked up 13.9 percent support in 2020, the highest he’s gotten in his eight appearances — but based on past voting patterns, he has practically no chance of getting to the necessary 75 percent in either of his final two ballots. 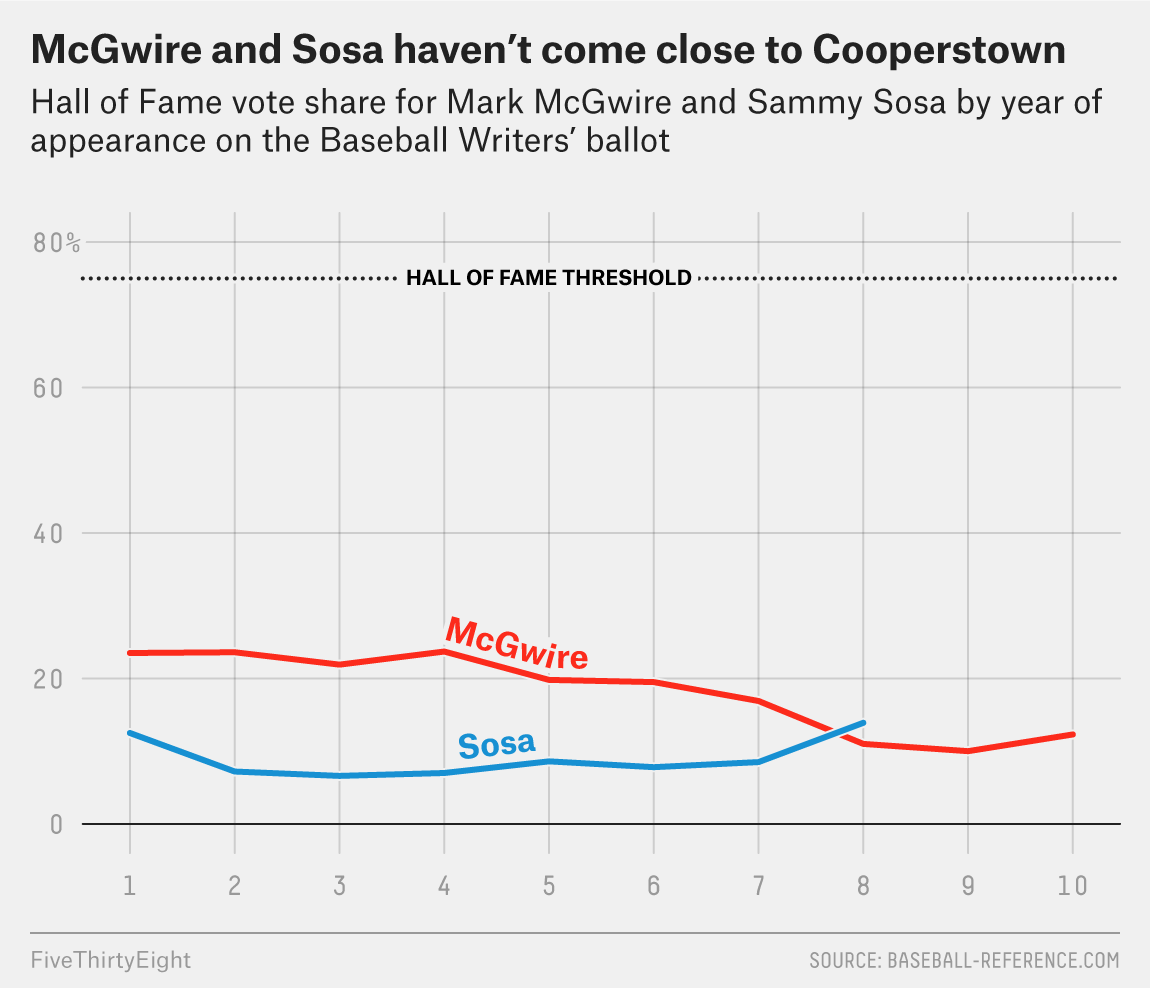 Maybe that’s fair. According to polls we’ve conducted, most fans think steroid users should see at least some of their stats adjusted downward — by an average of about a third — which would substantially affect Sosa and McGwire’s Cooperstown bona fides. But it’s also clear that the duo has been condemned for a problem that was much bigger than them.

“I think that those two have borne the brunt [of the blame] in a way that they don’t deserve,” author Jay Jaffe said in “Long Gone Summer.” “The steroid problem wasn’t just a matter of individual bad actors; it was a complete institutional failure on the part of the owners, the union, the players, to some extent the media. I don’t think you can just say it’s Mark McGwire or Sammy Sosa’s fault. It’s everybody’s fault.”

Cases like Sosa’s and McGwire’s are partly what the Hall of Pretty Damn Good Players is for, anyway. It’s a haven for those who have been excluded from the real Hall of Fame, regardless of the reason. During one shining summer, this pair of larger-than-life sluggers put on one of the most exciting, must-watch performances in baseball history. That’s something that can never be taken away, even though the full story is messier than we knew at the time.