This weekend, only one batter — Houston Astros stalwart Craig Biggio — will be inducted into the National Baseball Hall of Fame. One major reason for the lack of swingers: The folks voting people into Cooperstown are (how can we say it?) skeptical of hitting records achieved during baseball’s “steroid era.”

Spanning from the early 1990s to the mid-2000s, those juiced-up years saw a number of the game’s most treasured records assaulted by players who were later implicated in the use of performance-enhancing drugs. And that presents a bit of a pickle: On the one hand, players set new milestones in America’s pastime; we can’t just ignore those, right? On the other hand, a lot of those people were injecting a cocktail of hormones and steroids into their buttocks to reach those milestones. Factor in baseball’s revered position in American society and the diversity of opinions about how severe said crimes against the game actually were, and you have an ethical/bookkeeping quandary of profound proportions.

This issue is particularly thorny for folks like us, who use statistics to understand the game. We could strike the steroid-era records entirely, and then all of a sudden, the all-time top list is the same as it was in 1993. We could count all of them, but that won’t make them legitimate in the minds of many people. So, what to do?

Mutually exclusive solutions — strike ’em or count ’em — make this a tough nut to crack. Alternatively, though, we could apply a discount — a penalty in percentage terms deducted from players’ individual statistics. That would then alter the record books, penalizing players who juiced.

We asked SurveyMonkey Audience to run a poll asking Americans all about baseball, and one question was whether a player’s statistics — such as home runs — should be partially discounted for the purposes of records and leaderboards if he is found to be using performance-enhancing drugs (PED), and if so, how much of a penalty should be applied.

In the survey results, there were essentially three camps:

The median voter suggested a 20 percent penalty for juicers,2 while the average penalty was 36 percent. The strip-everything crowd drags the average up. But if you cut out the all-or-nothing extremists, the median increases to 30 percent.

So what would baseball history look like if we applied a few of these penalties to the steroid-era stats3 of implicated players? (Specifically, players who were suspended for PED offenses, were linked to the Biogenesis scandal, were named in the Mitchell Report or whose failed drug tests were leaked to the media.) Could we successfully penalize performance-enhancers without pretending that an entire era’s worth of great players didn’t accomplish a thing?

Here’s how the all-time home run leaderboard would change if we applied discount rates of either one-fifth or one-third to the round-trippers mashed by PED users: 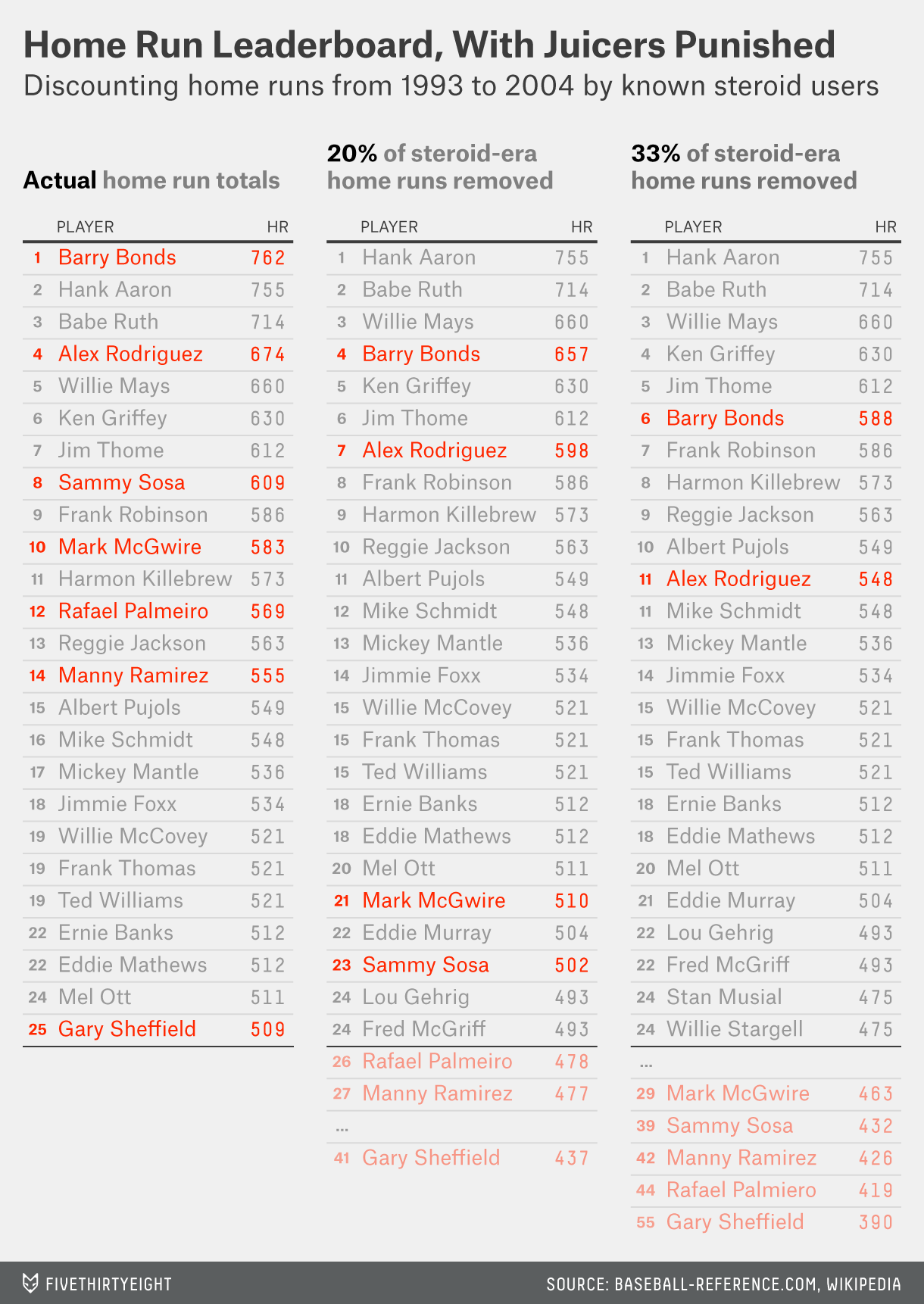 The poster boy for steroid-fueled home run dominance, Barry Bonds would lose about 105 home runs under a 20 percent discount and nearly 174 if we dock users by 33 percent. The latter penalty would still land him in the top six for career dingers, but he’d also sit a distant 167 home runs behind Hank Aaron for the all-time lead. Also, Alex Rodriguez would go from fourth to 11th on the lifetime list; the quartet of Sammy Sosa, Rafael Palmeiro, Manny Ramirez and Gary Sheffield would drop by roughly 30 slots apiece; and Juan Gonzalez would fall by 73 spots.

This process doesn’t have to be restricted to home runs. Here are the all-time leaderboards for position-player wins above replacement (WAR)4 if we apply the same discount rates detailed above: 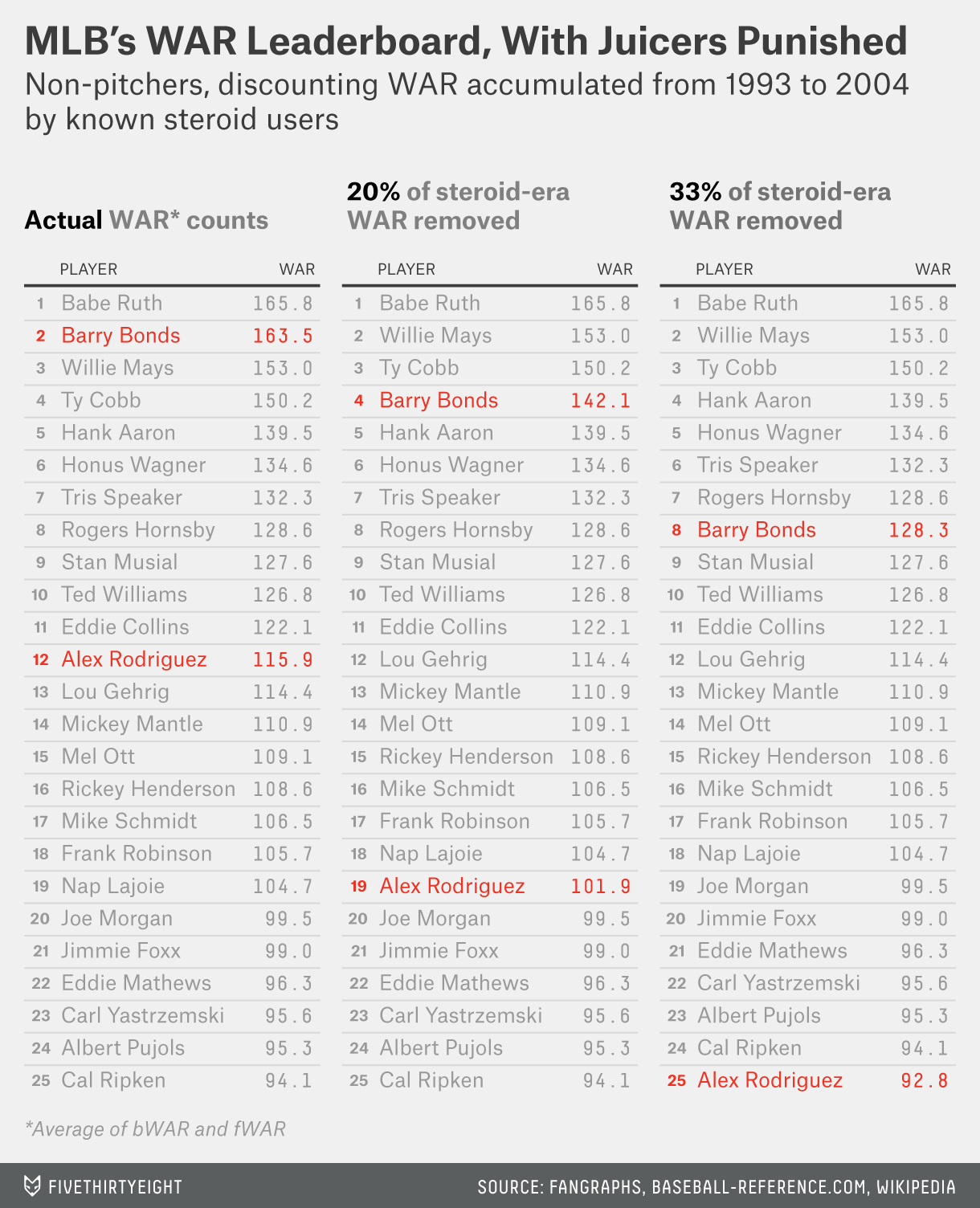 Perilously close to overtaking Babe Ruth as the GOAT in real life, Bonds drops to eighth in position-player WAR when we dock his steroid-era production by 33 percent. That leaves us with an all-time top five far more palatable to baseball traditionalists: Ruth, Willie Mays, Ty Cobb, Aaron and Honus Wagner.5

The debate over steroids in baseball is bitter and divisive, but this solution represents a compromise, based on real data, that attempts to meet all camps somewhere in the middle.

(Just kidding, this will never be settled and will remain a festering puncture wound to the game of baseball for generations to come. Play ball!)