With everyone self-isolating inside and the sports world on indefinite hold, many fans are turning to alternative sources of sports-adjacent entertainment — video games, TikTok, marble racing, etc. — to keep the flame burning. My personal outlet has been to watch a ton of classic games on YouTube, an alternate universe where the greatest teams and players of all time are still playing and we had never heard of COVID-19.

Because the pause in live sports has brought the greats of the past back to the present, we wanted to use this moment as an excuse to write about our favorite players from history who never quite got their due. These are the players who are unlikely to make their sports’ Halls of Fame but were still great in their own way. Think of it as the Hall of Pretty Damn Good Players.

To kick things off, I want to start with a beloved 1990s speedster and one of Cooperstown’s most egregious snubs: outfielder Kenny Lofton, most notably of the Cleveland Indians (but also a bunch of other teams).

For each baseball player going back to 1901, I’ve computed JAWS — an average of career and peak wins above replacement — using our JEFFBAGWELL metric to blend WAR from Baseball-Reference.com and FanGraphs;1 I’ve also calculated an estimated probability of making the Hall of Fame based on Bill James’s suite of traditional HOF indicators.2 To warrant consideration in our column, there has to be a big disconnect between your true value (i.e., JAWS) and your odds of making the HOF.

Lofton certainly qualifies in that department. He ranks as the ninth-best center fielder ever by JAWS, trailing only Mike Trout and seven Hall of Famers (so, eight Hall of Famers), but his conventional Hall bona fides would figure to give him only a 28 percent chance of making it to Cooperstown. And indeed, Lofton was kicked off the Baseball Writers’ HOF ballot in 2013 after just one appearance, garnering a mere 3.2 percent of the vote. That was a major miscarriage of Hall of Fame justice — one that may be corrected by the HOF’s era committees someday — but for now we can also appreciate Lofton’s greatness as, well, a pretty damn good player.

After playing in a Final Four as a basketball player at Arizona and getting drafted — then traded — by the Houston Astros, Lofton quickly established himself as a star in Cleveland during the early to mid-1990s. In his rookie season of 1992, Lofton hit .285 while leading the American League with 66 stolen bases and playing stellar defense in center, all of which added up to 6.2 WAR (11th-best among all hitters that year). It was a taste of things to come from an emerging star, on an emerging powerhouse of an Indians team.

Lofton’s most visible talent was his speed, which eventually helped him steal 622 bases at nearly an 80 percent success rate over his career. We don’t know what his peak Statcast sprint speed was, but Lofton was worth 85 more runs on the basepaths than an average player during his time in the majors,3 which ranks 11th among all players since 1901. During the 1990s, only Otis Nixon and Rickey Henderson swiped more bags than Lofton — and nobody was a more valuable base-runner relative to league average.

That image of Lofton as a speed-burner is probably what comes to mind when we picture him today, but he was a much more complete player than some of his fleet contemporaries. Compared with the top 25 steals leaders of the ’90s, Lofton had a better career slugging percentage than all but eight and a better on-base percentage than all but five; he was a more valuable fielder (relative to average) than all but three, and he hit for a higher career average than everyone but Roberto Alomar. With the exception of Henderson, a revolutionary baseball genius, most old-school speedsters had at least one huge flaw that kept them from becoming truly great players. Tony Womack couldn’t draw a walk, for instance, and Tom Goodwin couldn’t hit for power. (And Deion Sanders was just too good at football to fully focus on baseball.) But Lofton was also exceptional, far more so than anybody gives him credit for.

That showed up in Cleveland’s turnaround from a laughingstock to a perennial World Series contender in the mid-1990s. From 1994 to 2001 — so from when the Indians broke out with Lofton playing at an incredible 9.9-WAR pace per 162 games, the best performance of his career, through Lofton’s final season in Cleveland — the Indians had the third-best record in baseball. Their 718-509 mark trailed only the Atlanta Braves (who beat Cleveland in the 1995 World Series) and the New York Yankees (who ended Cleveland’s 1998 season two wins from the Fall Classic). Over that span, Lofton was the Indians’ second-most-valuable player by WAR, trailing only corner-infielder Jim Thome — despite Lofton not even playing the entirety of those seasons for Cleveland! (He spent 1997 with the Braves, where his season ended as a victim of one of the worst-called strike zones in playoff history.)

Despite not really being viewed as a true franchise cornerstone by the Indians, who dealt him for two lesser players in Marquis Grissom and David Justice before bringing him back, Lofton was a driving force behind an iconic team that ranks as one of the best ever not to win a World Series. With six All-Star nods in the decade, he was also one of the biggest stars of the ’90s.

So … what has kept Lofton from getting his due as a player? Why is he in the Hall of Pretty Damn Good Players and not the Hall of Fame?

Well, it is true that his production declined from that of a star to simply a very good player starting in the 2000s. After accumulating 5.2 WAR at age 32 in 1999, Lofton never again had more than 3.7 WAR in a season. But he was also highly useful over the remaining eight years of his career: He eclipsed 3 WAR four times and just missed out on a fifth (with 2.8 in 2007). 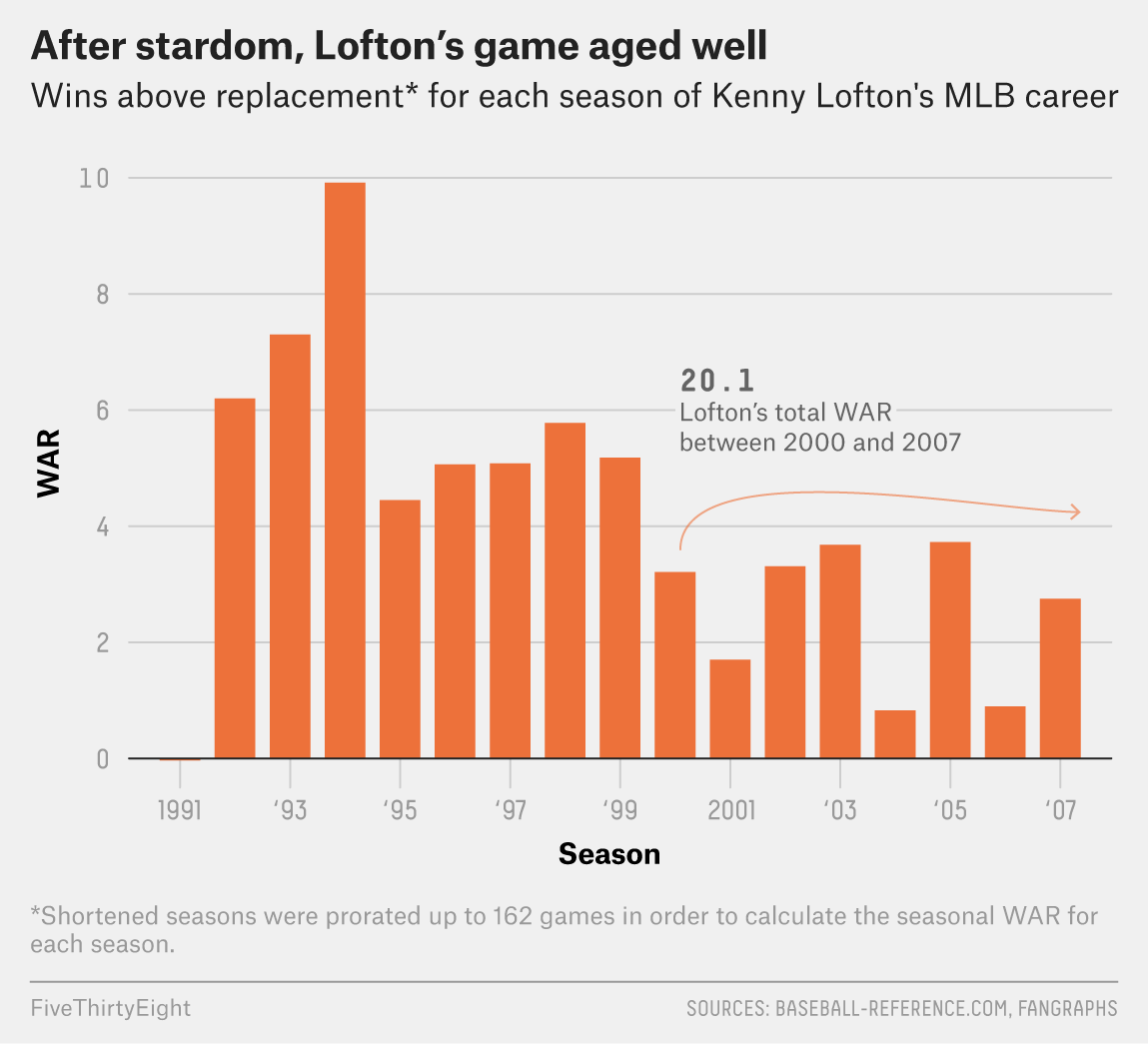 During Lofton’s “decline phase” from 2000 through 2007, he still racked up 20.1 total WAR, which ranked 66th among all major league hitters. Again, this was when Lofton was past his prime, a range of years spanning his age-33 through age-40 seasons! And he was also a postseason fixture during this time. After playing 43 total playoff games in the 1990s (which itself was tied for 22nd in MLB), Lofton played 52 more in the 2000s, including 29 in either the League Championship Series or World Series.

Arguably, the only thing keeping us from really appreciating Lofton is that he wore so many different uniforms late in his career. Including his free-agent departure from Cleveland in the winter of 2001-02, Lofton switched teams a dizzying nine times in his final six seasons, never playing for the same team in consecutive campaigns. According to Baseball-Reference’s data, only 10 players since 1901 — Lofton, Russell Branyan, Tommy Davis, Octavio Dotel, Shawon Dunston, Kelly Johnson, Erik Kratz, Bob Miller, Rudy Seanez and Rick White — switched teams that many times over any six-year span. Lofton was the best player in that group by a mile, with nearly 3.5 times as many career WAR as anyone else on the list, but his career seems to have been diminished by nomadic association.

In fact, only one player as good as Lofton by JAWS ever switched teams as many times as he did during his career: none other than Henderson, the leadoff god himself. (Both changed jerseys 12 times.)

Henderson’s greatness was so apparent that he could have continued playing for any number of teams and it wouldn’t have diminished his legacy at all. (If anything, the notion of an ancient Henderson riding the bus in independent-league ball probably added a certain romantic element to his story within the game.) But great as he was, Lofton wasn’t at Henderson’s level. He wasn’t immortal enough for his vagabond status not to be held against him. Nor did he manage to win a World Series with any of the clubs he hopped to late in his career, which would probably have helped his Cooperstown case.

But he did consistently help his teams — from the ’90s Indians to the 2002 Giants, 2003 Cubs, 2004 Yankees and 2007 Indians — come close to baseball’s mountaintop. Lofton was a winner, suiting up for the ninth-most career postseason victories of any player in history (49) to go with 1,168 wins in the regular season. His individual numbers fit in alongside those of Hall of Famers at his position. He was exciting to watch. Add it up, and Lofton’s career was damn good — plainly deserving of far better than the one-and-done treatment it got from Hall of Fame voters a few years ago.