During Tuesday’s presidential debate, President Trump once again refused to commit to accepting the results of the 2020 election. He also repeatedly made misleading or false claims about the integrity of the election.

It’s no surprise, then, that many Americans are pessimistic about whether the election will be free and fair. At the moment, these doubts are most pronounced among Republicans, who are far more likely to trust or believe the president than Democrats or independents.

In a NBC News/SurveyMonkey’s weekly tracking poll released ahead of Tuesday’s debate, 56 percent of Americans said they were “not too confident” or “not at all confident” that the election would be conducted in a free and equal way, including 65 percent of Republicans. And as the chart below shows, Republicans in that tracking poll have consistently been more likely to say they lack confidence in the electoral process than Democrats or independents. 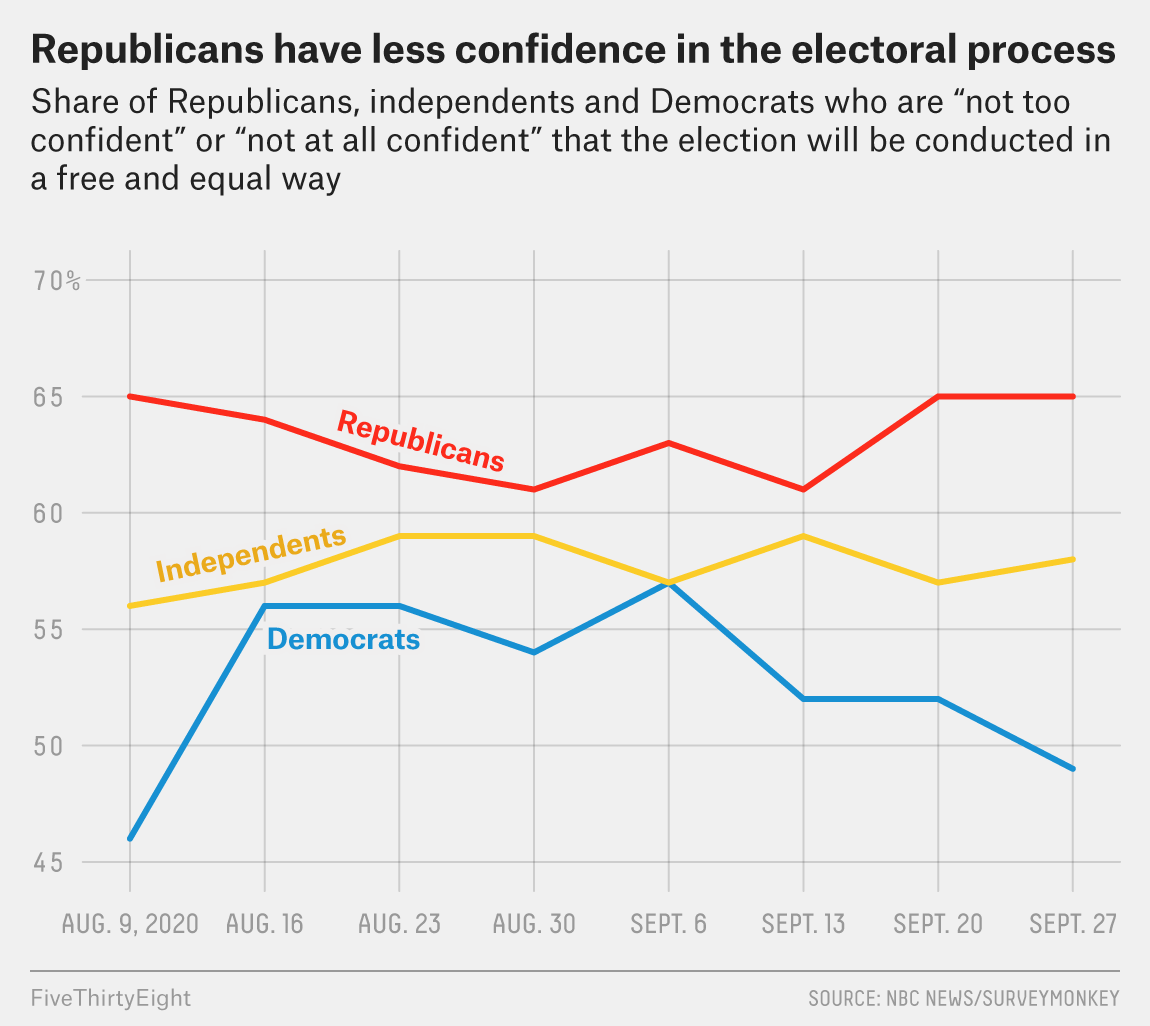 One reason Republicans are more concerned at this point is because Trump and the GOP have for many months now cast doubt on the electoral process, in particular the use of mail voting. Historically, mail voting hadn’t been a partisan issue, but now most Republicans don’t trust it: In that NBC News/SurveyMonkey poll, 79 percent of Republicans said they opposed changing election laws to allow everyone to vote by mail, though 53 percent of Americans overall supported the idea.

Other surveys have also found that Republicans have more doubts about the fairness of the election. A poll released on Monday by Monmouth University found that 39 percent of registered voters weren’t confident that the election would be conducted fairly and accurately, including 44 percent of Republicans and 31 percent of Democrats. Meanwhile, in The Economist/YouGov’s weekly poll, 28 percent of registered voters said they had only a little confidence or none at all that the 2020 election would be held fairly. The differences by party were smaller here — 30 percent of Republicans and 24 percent of Democrats held this view — but Democrats were more likely to say they had a great deal or quite a bit of confidence in the election (44 percent) than Republicans (32 percent).

Overall, Democrats have more confidence about the election than Republicans, but there is plenty of doubt, too. In the latest NBC News/SurveyMonkey poll, half of all Democrats said they were confident the election process would be free and equal, the first time since early August that at least 50 percent of Democratic respondents to this survey’s question felt that way. However, a new Politico/Morning Consult poll found that 36 percent of voters didn’t think the election would be free and fair, including 41 percent of Democrats and just 31 percent of Republicans. Democrats also expressed slightly less trust in the U.S. electoral system (62 percent) than Republicans (72 percent).

It’s worth noting, though, that question wording and which part of the electoral process is being asked about can influence how people respond. For instance, an NPR/PBS NewsHour/Marist College poll asked if voters were confident that their state and local governments would run a fair and accurate election, and only 26 percent of likely voters said they weren’t confident. Republicans were still more likely to express doubts (30 percent) than Democrats (18 percent), but those numbers suggest that respondents have comparatively more faith in state and local officials carrying out the election than they have in the electoral process more generally. Similarly, 57 percent of registered voters told The Economist/YouGov that they had a great deal or quite a bit of confidence that their own vote would be counted, while only 36 percent expressed the same level of confidence that the election as a whole would be held fairly.

The bottom line, however, is that a lot of Americans don’t trust the electoral system, and more probably had faith in the electoral process four years ago than they do now. In September 2016, 59 percent of registered voters in an NBC News/Wall Street Journal survey said that the result of the election would be counted accurately, while only 34 percent disagreed. But this past August, the same pollster found registered voters split on that question, with 45 percent expressing confidence that the results would be accurately counted and 45 percent saying they weren’t confident. 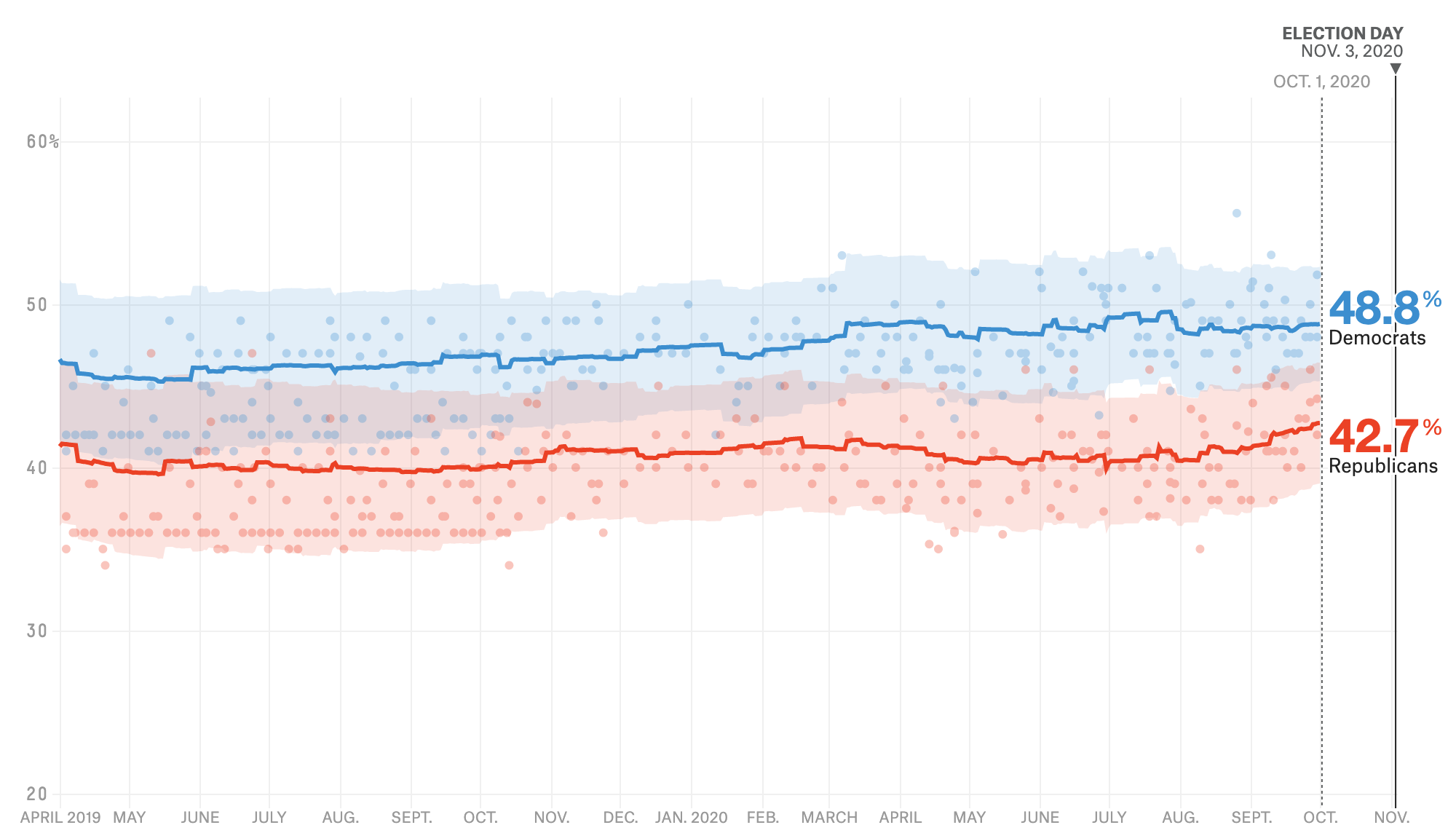