I warned you to be suspicious of novel theories about the defeat of House Majority Leader Eric Cantor in his Republican primary last week. It probably had something to do with Cantor’s identification with the Republican establishment at a time when it is deeply unpopular. But to the extent that Cantor’s defeat was like an earthquake, that means we can’t pin down its causes all that precisely. We might even think of it as having been somewhat random. Why did Cantor’s district give way when so many others held? (Only 1 to 2 percent of Republicans running for re-election to the House of Representatives have been denied their nomination since 2010.)

But here’s one such theory, as described by a New York Times article published Sunday: Perhaps Cantor’s defeat — and the near-defeat of Republican Sen. Thad Cochran in Mississippi — has something to do with migration patterns. If more people are moving into areas where they are less familiar with the incumbent, perhaps the incumbency advantage has waned.

Indeed, there’s robust evidence that politics are becoming more nationalized; state and local races (like those for governor) are more likely to follow patterns from federal races and less likely to involve ticket-splitting.

But it’s less clear that this has much to do with migration patterns, or at least not in the way that The New York Times proposes. More of the evidence contradicts rather than supports its hypothesis, in fact.

The theory doesn’t align well with the results in Virginia. If migration to Virginia was a major contributor to Cantor’s defeat, you’d expect Cantor to have done worse in counties where there were more transplants.

Instead — as can be seen in the graphic below — there was essentially no relationship between the percentage of the population that was born outside Virginia (as based on American Community Survey estimates) and the share of the vote that Cantor received in a county: 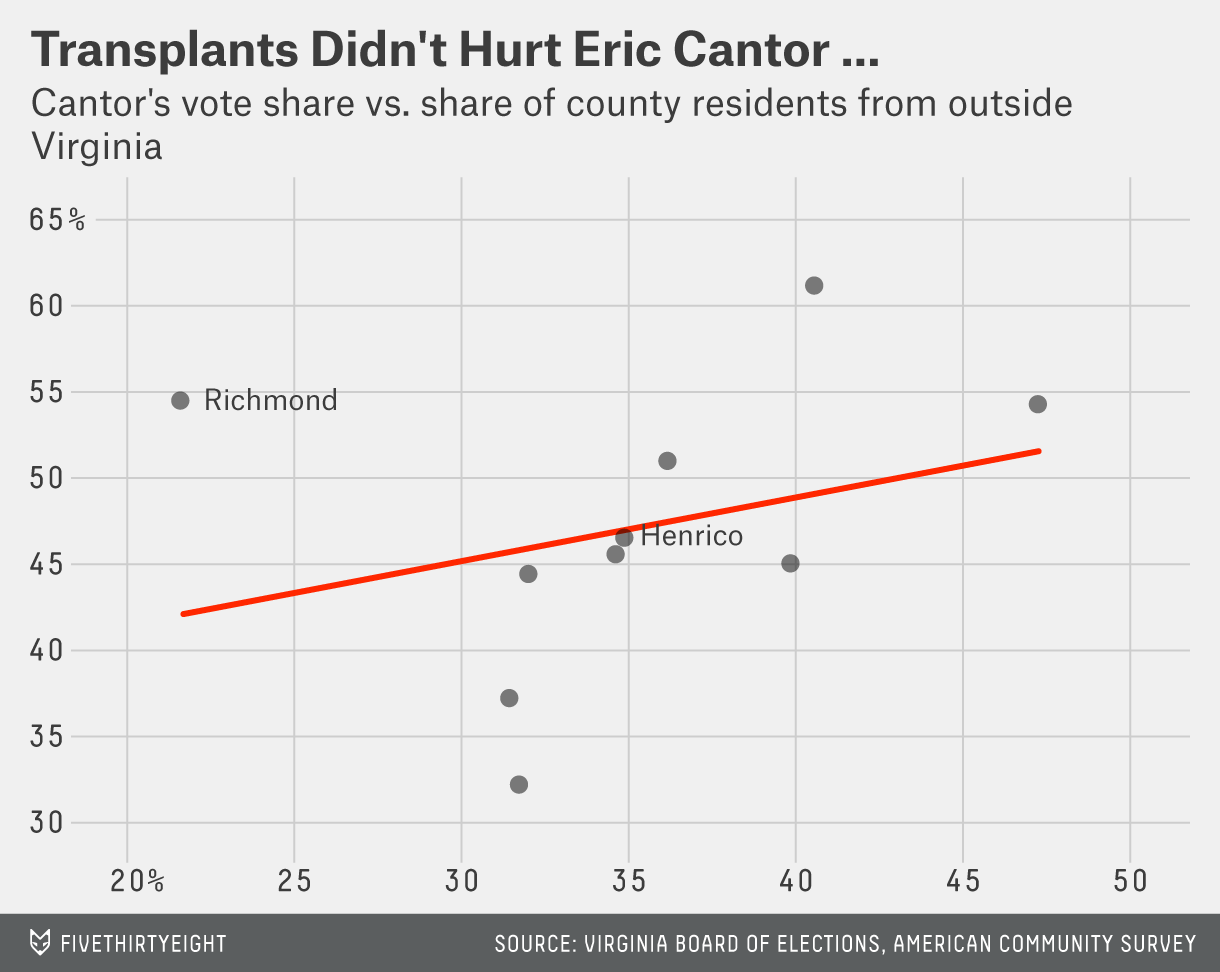 If anything, Cantor did better in counties with more transplants. This is especially so if you exclude the city of Richmond (Virginia has a number of cities that are not incorporated into any county), where Cantor was born, and where he maintains his home and his local campaign office. (I’ve also excluded Henrico County, which is where Cantor’s opponent David Brat makes his home.) If you do that, the relationship between Cantor’s vote share and the percentage of transplants is highly statistically significant and positive — running in exactly the opposite direction of what the Times’s theory would imply: 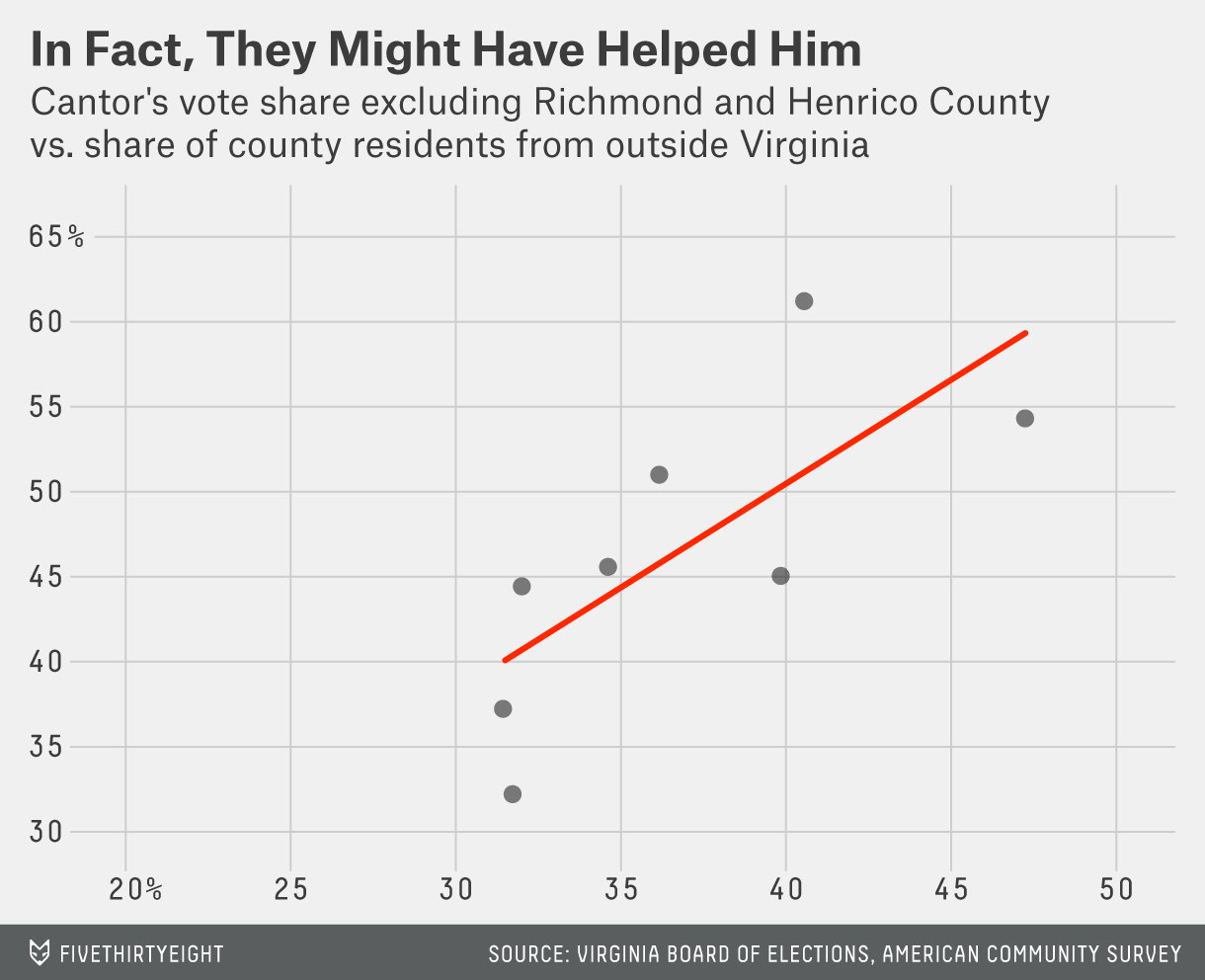 How about in Mississippi? There, the relationship at least goes in the right direction from the standpoint of the Times’s theory. Thad Cochran, the incumbent, did slightly better in counties with fewer out-of-state transplants: 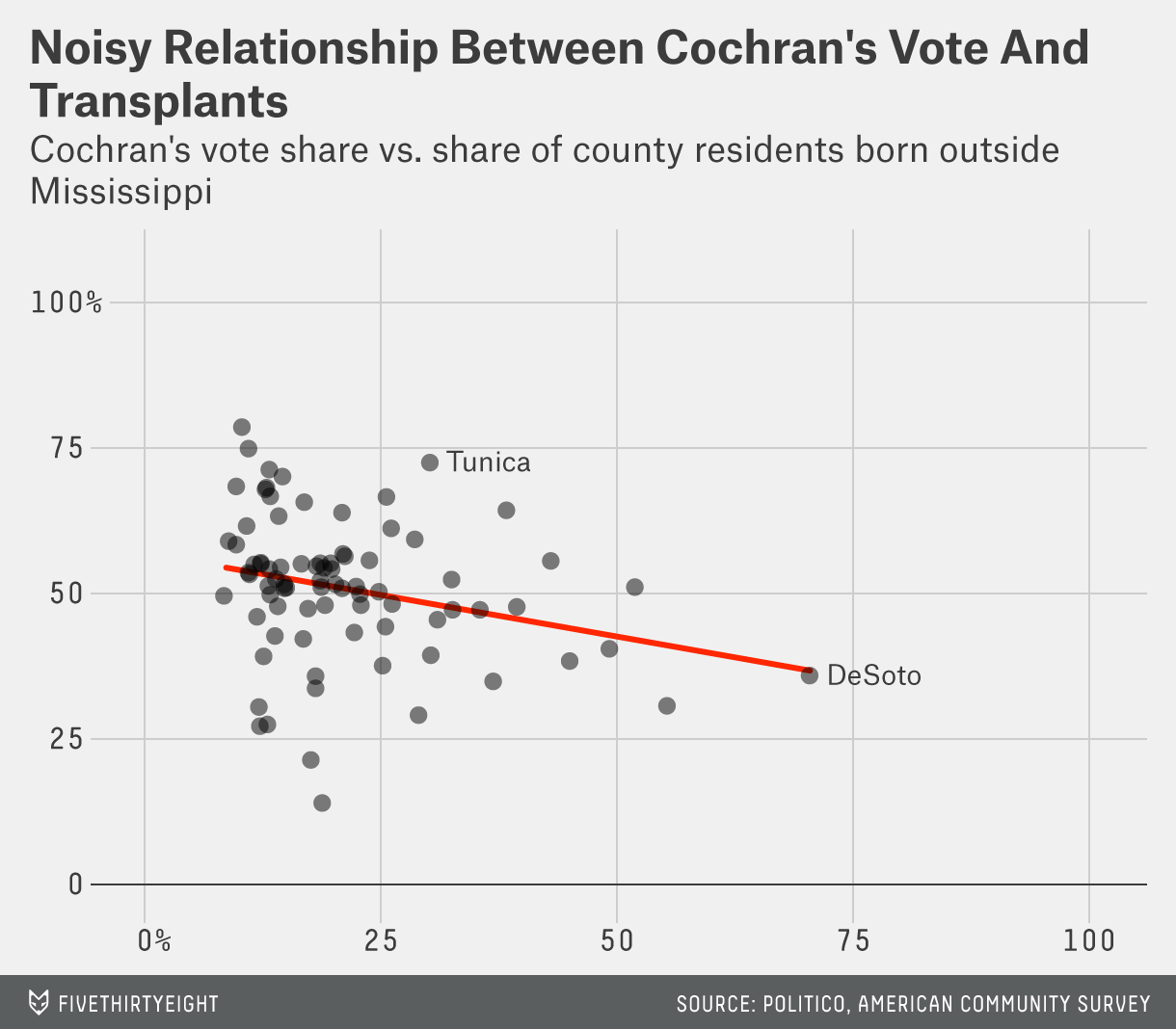 What’s the difference between Tunica  and DeSoto? DeSoto is mostly white and highly conservative; it gave Mitt Romney 66 percent of its vote in 2012. Tunica is mostly black and gave President Obama 79 percent of its vote. There is, in fact, a fairly strong relationship between the Mississippi primary outcome and the presidential results. In more conservative counties — where Romney got more of the vote — Cochran did worse and McDaniel did better. 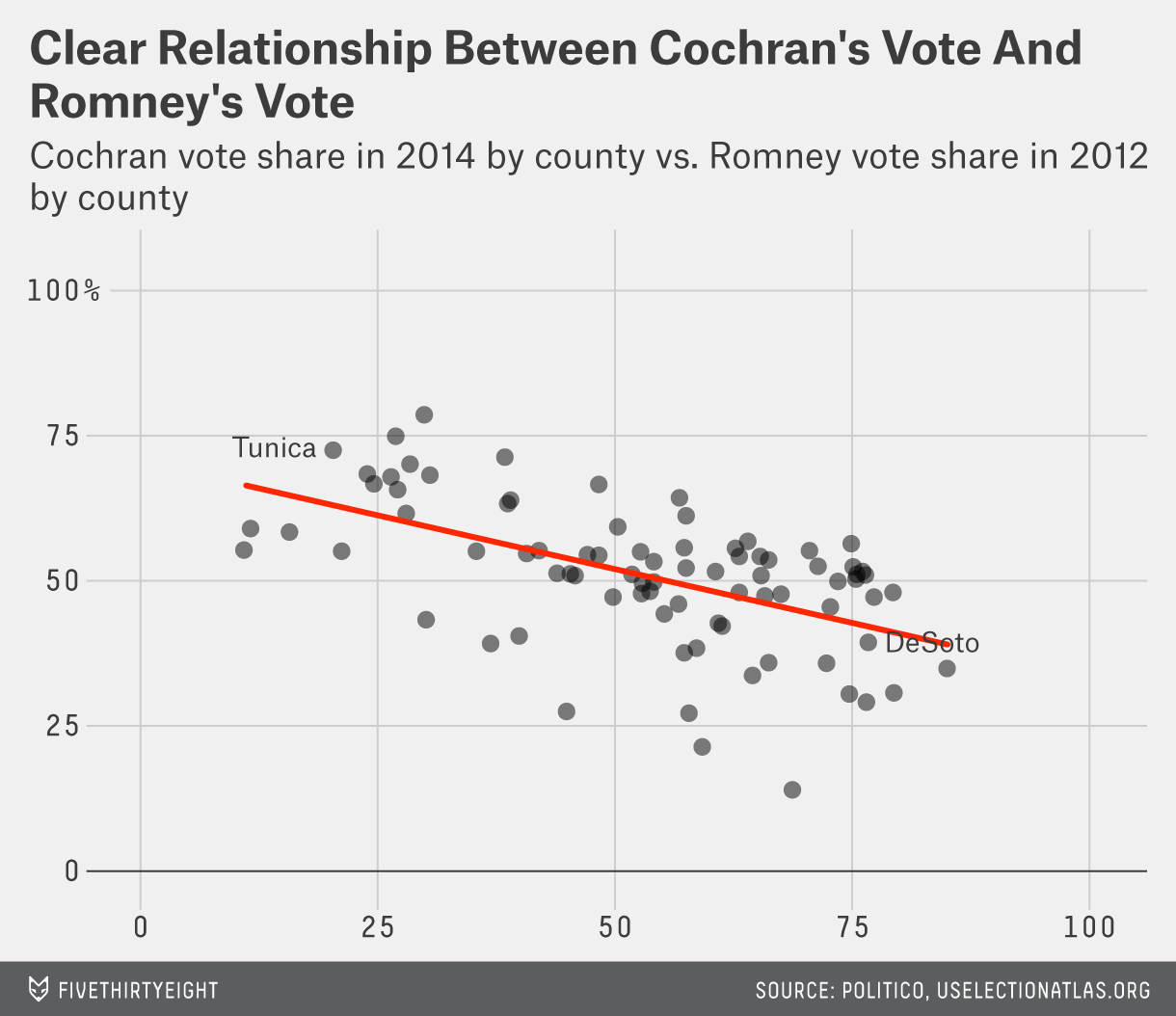 Once you account for a district’s presidential vote, in fact, the share of transplants is not close to being statistically significant in explaining Cochran’s vote. It doesn’t tell us much of anything.

There are other problems with the Times’s theory. For instance, while the share of transplants is fairly high in Virginia, it is quite low in Mississippi. As of 2010, 72 percent of Mississippi residents were born in the state, well above the national average of 59 percent. If transplants were a major factor in predicting incumbent defeats, you’d have expected Cochran to be safer than most incumbents and not more vulnerable.

Yet another critical problem is that migration is decreasing significantly in the United States, both among states and within them, in part because of the recent recession. If there’s a link between migration and incumbent vulnerability, you’d have expected incumbents to become less vulnerable overall — not more so, as the Times asserts.

The article may be reflecting the views of some of its sources; the Times’ house style sometimes makes it hard to tell where reporting ends and analysis begins. Karl Rove, for example, is one Republican who espoused a link between migration patterns and incumbent defeats for the piece:

“They don’t know who the heck Thad is,” said the Republican strategist Karl Rove, of Mississippi’s newly arrived voters. “There is no 40-year history with him, knowing that this is the guy who built up the state’s modern Republican Party. The same with Eric, people who have just gotten to Richmond don’t even know what the House of Delegates is, let alone that he served there.”

This theory is a bit self-serving for Rove, who has fought to defeat primary challenges against Republican incumbents. Blaming migration patterns for them, rather than the increasing conservatism of the Republican Party, or the increasing (if sometimes oversimplified) divide between the Republican establishment and party outsiders, would imply he is less responsible for them. In this case, however, the theory doesn’t fit the evidence at all.