State Sen. Chris McDaniel finished over 1,000 votes ahead of U.S. Sen. Thad Cochran in Mississippi’s Republican primary for U.S. Senate. But McDaniel — with 49.5 percent of the vote — is short of a majority, the threshold needed to avoid a runoff. So we’ll have that runoff June 24.

We’ll have to wait for polling to gauge the lay of the land, but what can we glean by looking at past runoffs? One certainty and one possibility.

The certainty: Runoffs are unpredictable.

The possibility: McDaniel may do better in the rematch; runoffs give lesser-known candidates more time to raise their profile.

Since 1988, there have been 13 Republican runoffs for governor or Senate, according to the Federal Election Commission and Congressional Quarterly. In these races, the first-round leader lost an average of 5.1 percentage points. But there isn’t a clear pattern; the first-round leader gained ground five times and lost ground eight times. 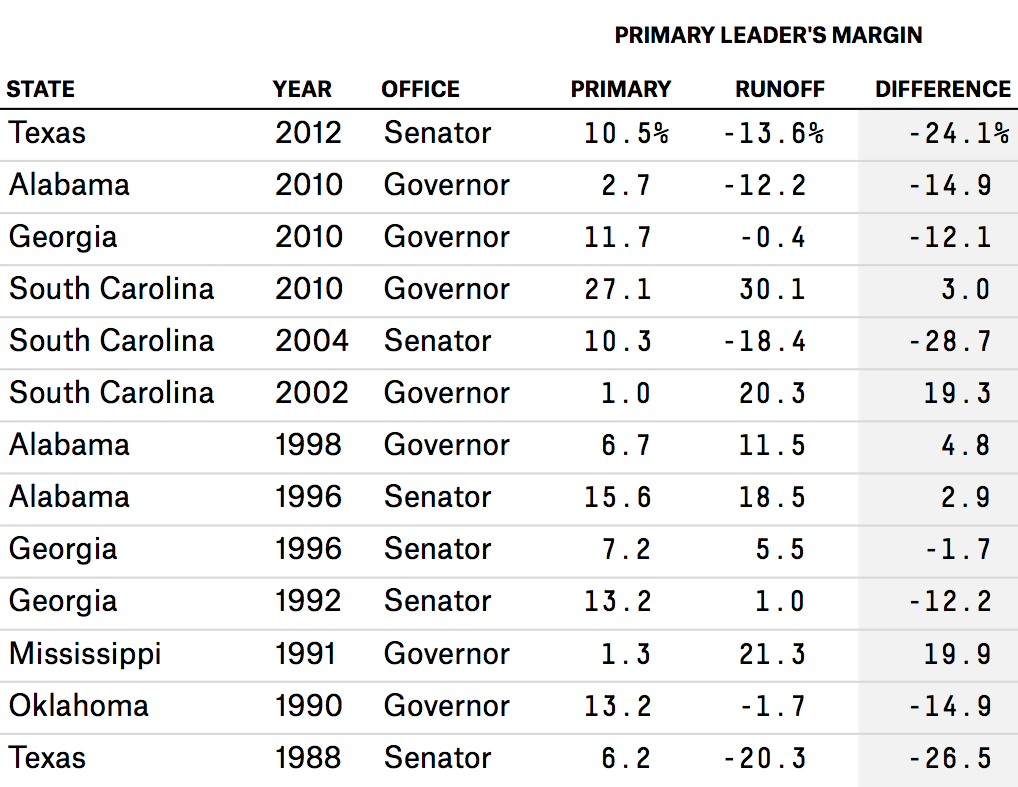 The 1998 Alabama gubernatorial election was the only Republican runoff that — like the race in Mississippi — included an incumbent, Gov. Fob James, and James gained ground between the primary and runoff. James, however, was leading after the first round. The only Senate runoff during this period to feature an incumbent was on the Democratic side, Arkansas’s 2010 election. Blanche Lincoln slightly expanded her lead.

So we can’t confidently say Cochran has an advantage in the runoff because he’s an incumbent, and we can’t confidently say McDaniel has an advantage because he led — barely — the initial primary vote. But runoffs also provide an extra campaign time; in Mississippi’s case, the candidates have a bonus of almost three weeks. Does that time benefit lesser-known candidates by giving them more exposure?

There isn’t polling available for a lot of these primaries, but we can see whether the candidate who held higher political office (and so is probably better known) did worse in the runoff. 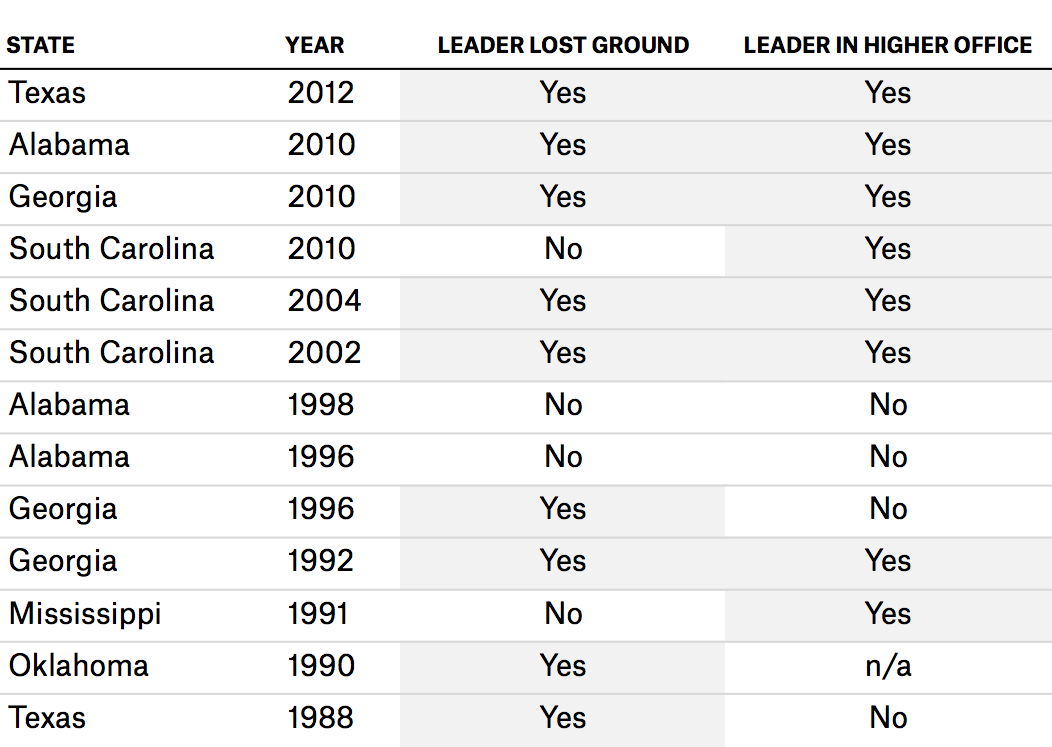 Still, Alabama’s James and then-Attorney General Jeff Sessions stand out as well-known candidates who did better in the second round, despite being higher on the political ladder.

How about this: Does the more conservative candidate gain ground in runoffs? 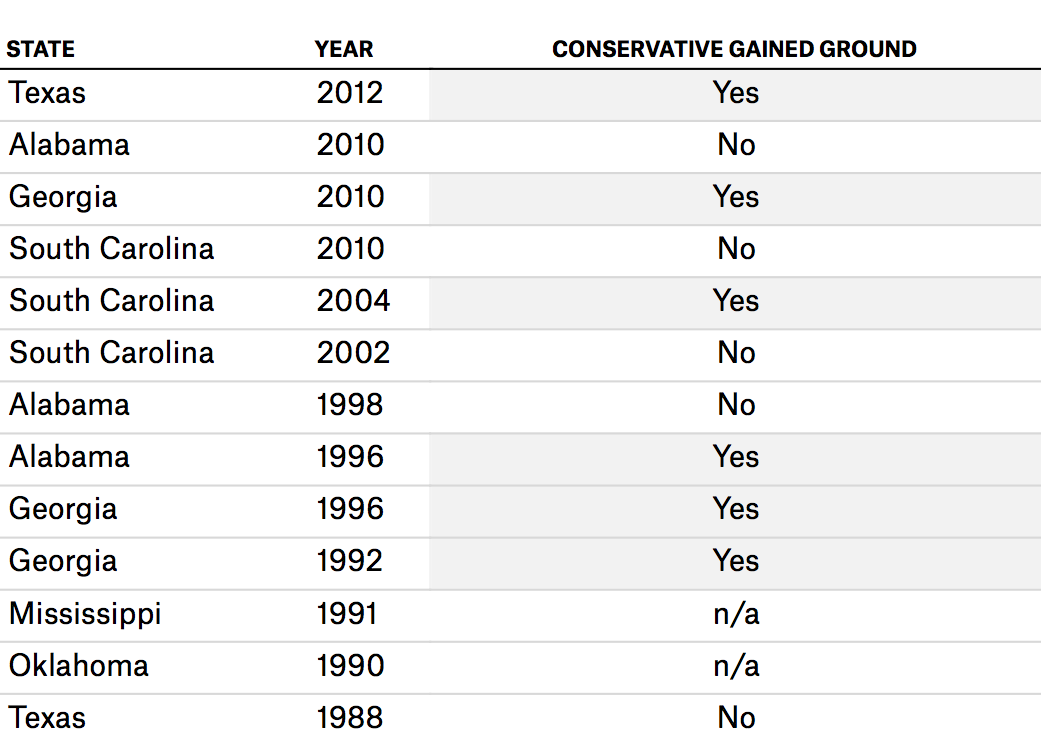 Not really. Let’s compare the candidates using ideological scores from Stanford professor Adam Bonica (these are based on the ideology of the people who donate money to each candidate). Six of the 11 races for which we have scores featured the more conservative candidate doing better; five showed the opposite.

All of this suggests we should be cautious in speculating how the Mississippi runoff will go. There hasn’t been a GOP primary for Senate or governor in the past 26 years in which an incumbent didn’t get the most votes but still made a runoff. We’re in mostly uncharted territory. Yes, McDaniel could be considered the favorite; he had a slight lead in the first primary vote, and candidates who held higher office have usually lost ground. But it’s a small sample size, and the examples of James, Lincoln and Sessions say otherwise.