Thirty-six states will choose governors this November. These states are home to 79 percent of the total U.S. population. They face a range of challenges, from too few jobs to too little water, that are as varied as the candidates they’re voting for. Some of the candidates are long-time incumbents, others are new to politics. Some are quite liberal, others not so much. Some served as governor back in the 1970s, others were born in that decade.

But despite those differences, the candidates for governor in 2014 share something important in common: From Colorado to Florida, voters are likely to see them as Democrats and Republicans first, and as individual candidates a distant second. In recent years, gubernatorial elections have become increasingly nationalized, to the point where voting patterns in these races bear a striking resemblance to those in presidential races. If we look at all sitting governors, just 15 of the 50 lead states that were won by the other party in the last presidential election. That means just 30 percent of states split their votes. As recently as 1995, the figure was 44 percent, as Republicans were still competitive throughout the northeast.

Elections for governor weren’t always presidential echoes, as an analysis of county-level election returns shows. The fruits of that regression analysis are in the graphs below. The y-axis runs from 0 to 1, with 1 indicating a perfect correspondence between presidential vote and gubernatorial vote, and 0 meaning no relationship. So, the higher the line on the graph, the more accurately we can predict a county’s gubernatorial voting using its presidential voting. (Due to the one-party politics of the South until the 1960s, I excluded southern states.) 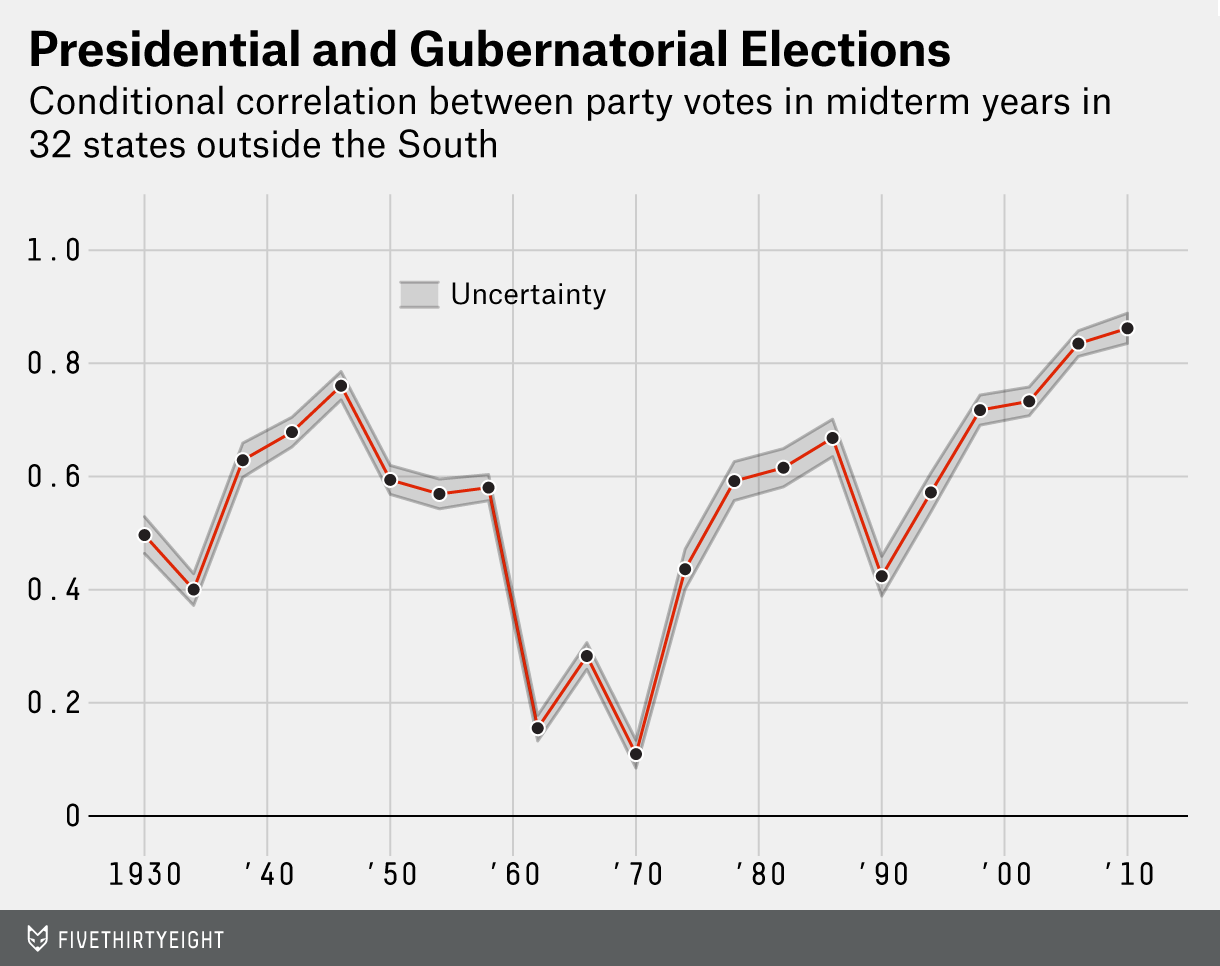 In the graph above, we see the relationship for midterm elections like 2010, and in the graph below we see it for presidential years like 2012.1 For gubernatorial elections held in midterm years, the predictive power of presidential voting rose during the 1940s, fell sharply in the early 1960s and then began to rebound in the 1970s. In 2010, it peaked: That year’s gubernatorial elections were the most nationalized since the New Deal. The counties that were the most strongly Republican in 2008 were the most strongly Republican in 2010. To a surprising extent, 2010’s gubernatorial races looked like a rematch of 2008’s presidential race, albeit with much higher baseline GOP support. 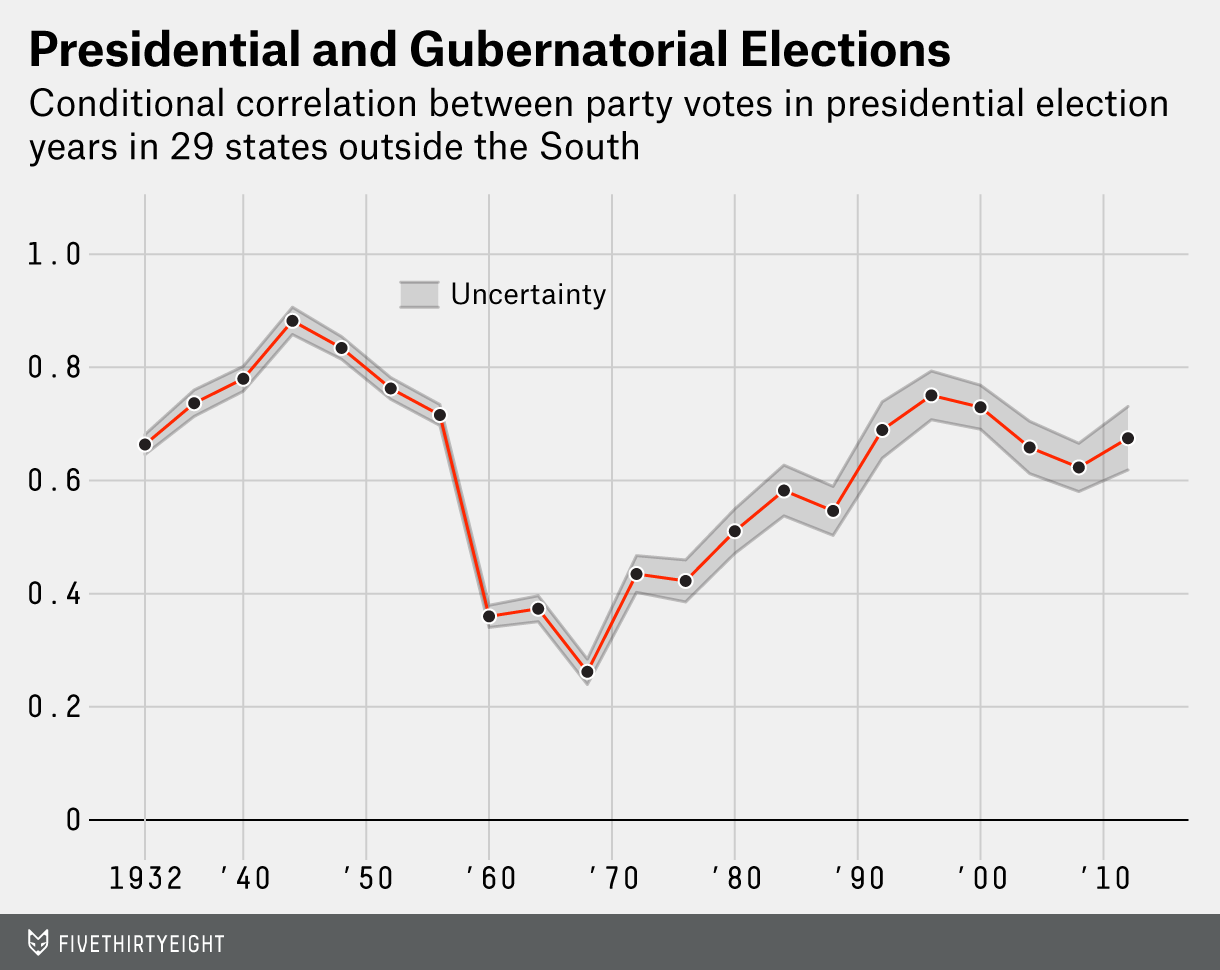 To really understand whether these midterm-year elections are nationalized, we also need to know what happens when voters are filling out a ballot for governors and presidents at the same time. That’s what’s in the graph above. You can see that nationalization has been rising since the 1970s in these on-cycle elections, too, and that an increasingly close relationship between presidential and gubernatorial voting has tapered off only slightly in recent years. Comparing the left and right graphs, we reach a surprising conclusion: The nationalization of the gubernatorial vote appears even stronger today in midterm elections, where the presidential candidates don’t appear on the same ballot.

This nationalization of gubernatorial elections comes partly because state politics doesn’t draw as much interest among voters as what’s happening nationally. One way to see that is to look at search data from Google Trends, on the theory that the more people are searching for a politician’s name, the more interest that politician generates. To stack the deck in favor of finding high levels of interest in a governor, let’s pick a highly visible governor — New Jersey’s Chris Christie, a Republican, will do the trick. And let’s look only at Google searches within his state between 2008 and the spring of 2013. (In this case, that benchmark is the number of searches for Barack Obama in the first week of November, 2008, when he was first elected president.) Here’s that graph: 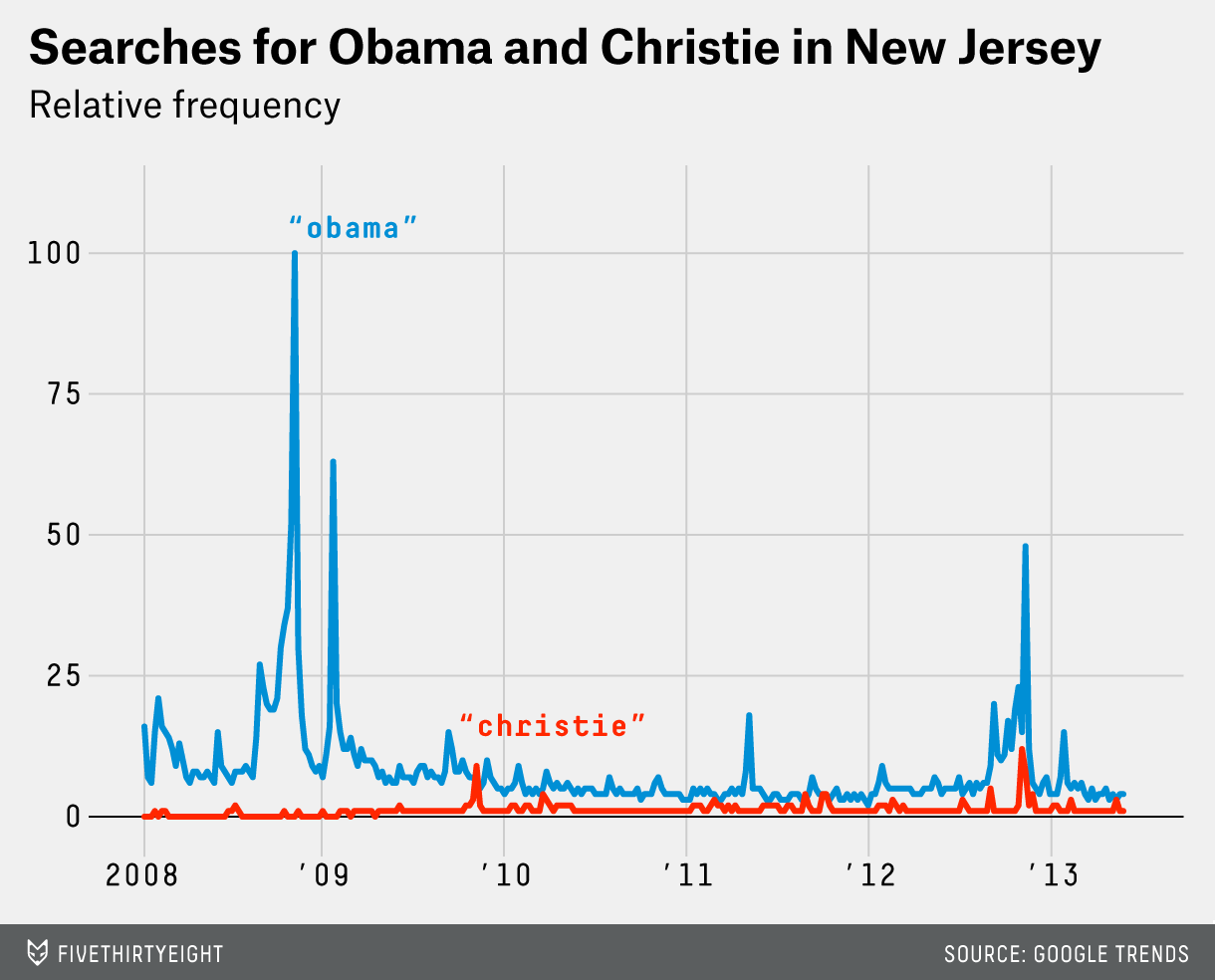 The scale goes from 0 to 100, where 100 represents the maximum level of traffic observed for either politician at any point during this time period. As the figure makes clear, even in Christie’s home state of New Jersey, Obama’s search traffic dwarfs that of the governor. In the period after 2009, when both Obama and Christie were in office, Obama generated almost four times as many searches.

In fact, there were only a few relevant weeks when there were more New Jersey-based searches for “Christie.” One was in early November 2009, when Christie was first on the ballot against incumbent Jon Corzine — and even then, Christie’s searches in New Jersey only outpaced Obama’s by 50 percent despite the tightly contested election. The others are the exceptions that prove the rule. For example, for one week in late 2011, as Christie was considering running for president, he generated slightly more searches than did the sitting president.2 For a governor looking to drum up some in-state attention, publicly considering a presidential bid might not be a bad strategy.

Similar analyses for other states turn up the same result: Governors typically attract far less attention than the president does, even in the states they govern. In a recent survey through GfK’s Knowledge Panel, which recruits adults from across the U.S. to take online surveys, I asked a national sample whether they followed the president, their state’s governor or their local executive most closely. Eighty percent named the president, while just 12 percent named their governor. Later in the survey, I asked which of those positions had the most impact on the respondents’ day-to-day lives. The answers were quite different, with 46 percent naming the president and 31 percent naming their governor. So as voters, we know that governors have significant authority (state and local governments account for 47 cents of every dollar spent by governments in the U.S.)  — but we nonetheless keep our gaze fixed on the presidency.

Former House Speaker Tip O’Neill is famous for saying that “all politics is local.” That was a reasonable summary in the 1960s and 1970s. But today, saying that “all politics is presidential” seems closer to the mark. Come November, the 36 gubernatorial elections are likely to break out in ways that bear a strong resemblance to the Obama-Romney contest two years before.