Last week, we published the data from two surveys asking Americans which states are in the Midwest and the South. We asked readers to send in remixes they made or any they came across; you folks delivered.

First, we have this set of visualizations from Benn Stancil of Mode Analytics. Stancil combined the two surveys to make an interactive graphic showing the regional patterns according to respondents in each state (for example, the Midwest according to Minnesotans vs. the Midwest according to Iowans). Here’s where Americans as a whole thought these regions were, with the circles denoting each region’s geographic center: 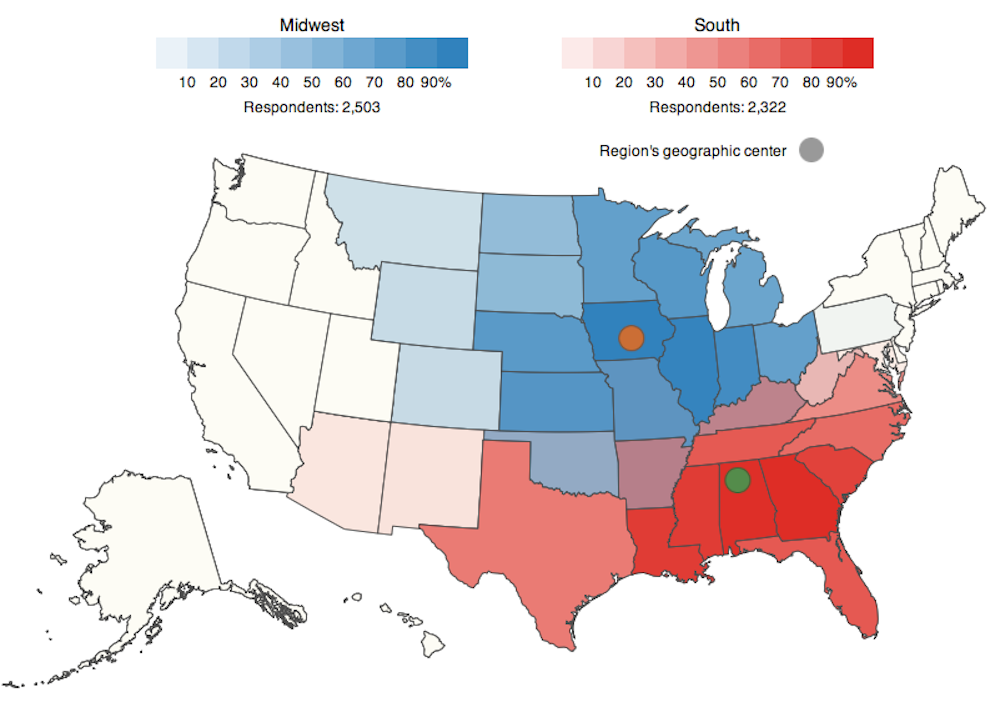 But Stancil wasn’t finished. You may recall that in our original post on the Midwest, I was surprised by how little consensus there was about which states were Midwestern. My unsupported theory: Self-identified Midwesterners define their region as their home state, plus the states bordering it. Looking at Stancil’s breakdown we can actually see that effect!

Here, for instance, are Indiana respondents on both the Midwest and the South: 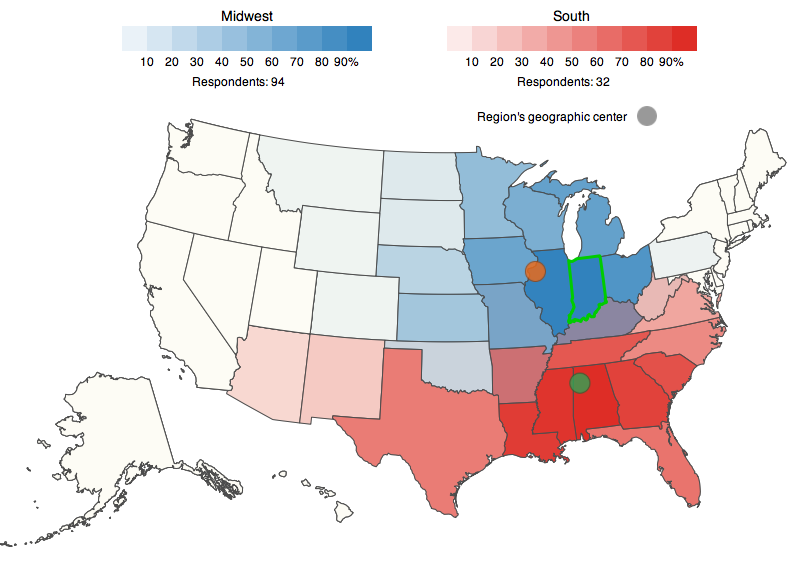 And here are results for Minnesotans: 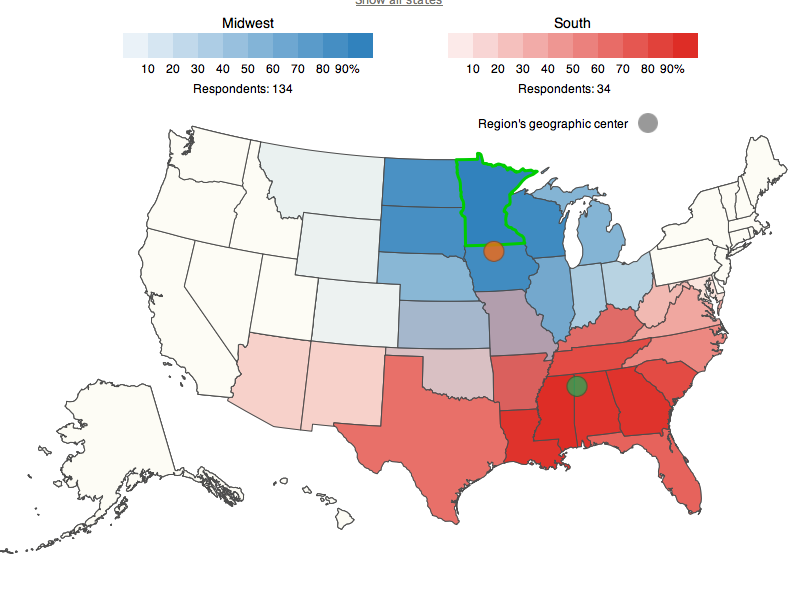 Notice that the geographic center of the Midwest according to each state’s respondents is much closer to their own state.

This is more anecdotal, but Josh Lubarr, a technical writer in the Boston area, wanted to find which respondents didn’t think Alabama, Mississippi and Georgia were part of the South. He found only four respondents who didn’t include those states. Josh sent in this tidbit:

Notably, the four lists that didn’t include Alabama, Mississippi, and Georgia were of identical composition: each only had *one* state on it: Texas.

David Gerster, the VP of data science at BigML, a machine learning shop, sent in this model that guesses whether a person identifies as a Midwesterner based on his or her ZIP code. As he wrote in an email:

You can see a gallery of all the work BigML is doing with the survey here. Gerster attached this map of the model’s predictions, where blue dots represent ZIP codes with respondents who consider themselves Midwesterners and orange dots show ZIP codes where respondents do not: 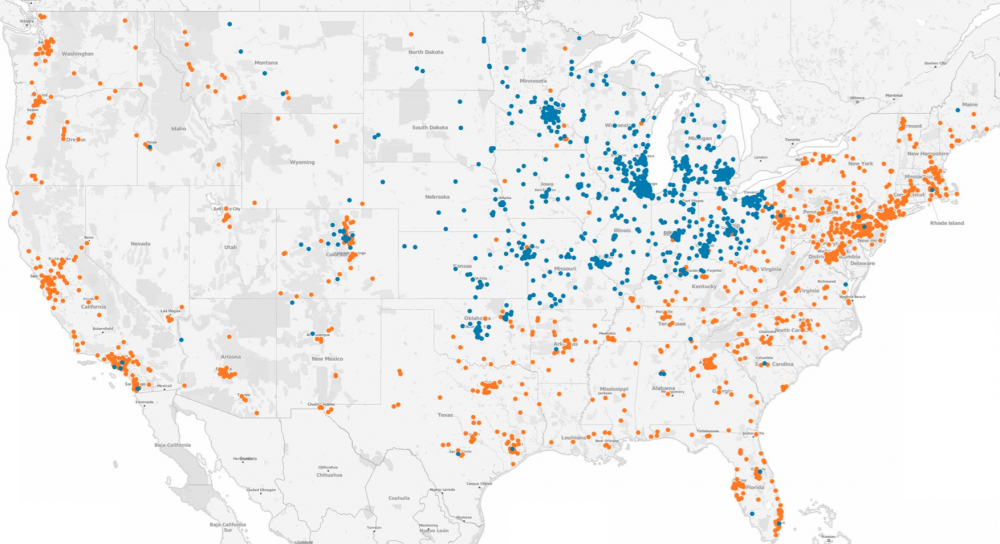 Next up we have the always great David Mendoza, who used fusion tables to analyze the ZIP code data. Screenshots don’t do his interactive maps justice, so definitely check them out here. 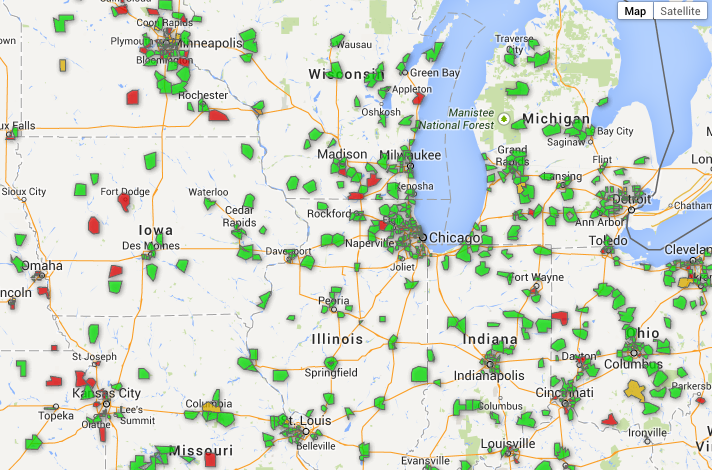 Mendoza also took a bold stab at the Missouri question (Missouri didn’t seem to be included in either the South or the Midwest). Mendoza found Missourians consider themselves proud Midwesterners, not Southerners, no matter what anybody else says.

If we missed your remix, please shoot me an email at walter.hickey@fivethirtyeight.com. The data remains available, too, for those who want to jump in.