Here’s a somewhat regular argument I get in: Which states make up which regions of the United States? Some of these regions — the West Coast, Mountain States, Southwest and Northeast are pretty clearly defined — but two other regions, the South and the Midwest, are more nebulous.

I’m from New York, and I generally consider anything west of Philadelphia the Midwest. This admittedly unsophisticated designation is frequently criticized by self-avowed Midwesterners. My boss, originally of Michigan, has many opinions about what, precisely, falls into the Midwest. So I decided to find out which states Midwesterners consider to be in their territory.

To get this broad-based view, we asked SurveyMonkey Audience to ask self-identified Midwesterners which states make the cut. We ran a national survey that targeted the Midwest from March 12 to March 17, with 2,778 respondents. Of those, 1,357 respondents identified “a lot” or “some” as a Midwesterner. We then asked this group to identify the states they consider part of the Midwest. 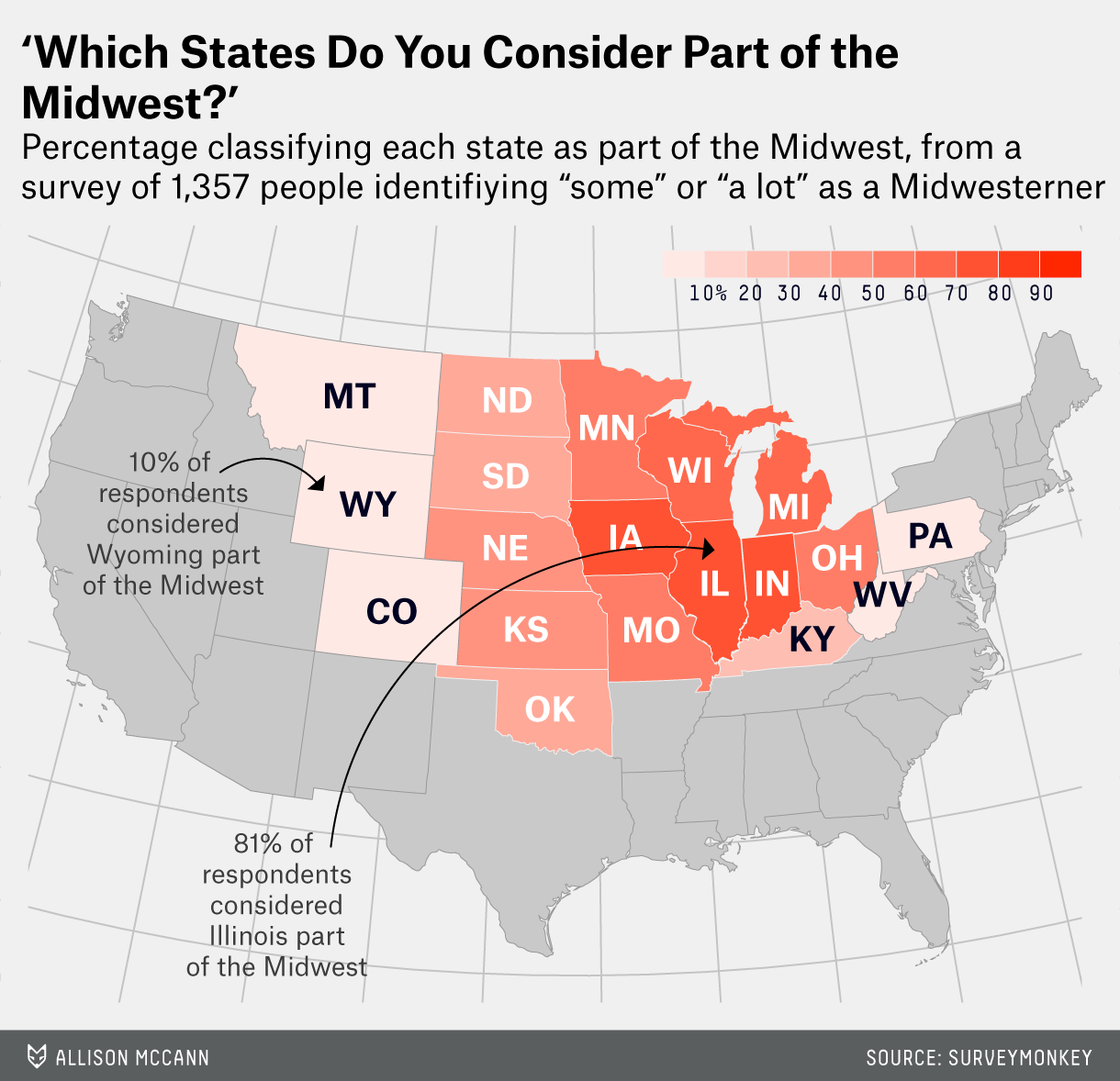 There are a lot of things here worth looking into. First, many people aren’t too sure about where the core of the Midwest is. Everybody selected at least one state for the question. But even Illinois — home of the preeminent Midwestern city, Chicago — was identified as Midwestern by just about 80 percent of respondents.

Contrast this with our soon-to-be-released Southern survey, in which people were somewhat adamant about which states make the group.

One potential, albeit anecdotal, source of this? Several self-proclaimed Midwestern sources I spoke with have a very limited definition of the Midwest: namely, their state and any state bordering it. Minnesotans thought they made up the true Midwest; Hoosiers thought they did. I can’t say either way.

Second, the potential Midwest spans further south than I thought. If half of our respondents thought Missouri and a quarter thought Oklahoma were in the Midwest, I probably should have asked about Arkansas, if only to pinpoint how far south people think the region expands. This Yankee regrets the error.

Indiana, Iowa and Illinois appear to be the core of the Midwest, each pulling more than 70 percent of the vote (that may partly be because of their substantial populations). Michigan, Wisconsin and Minnesota each pulled at least 60 percent of the vote, so we can probably put them in the Midwest without too much fuss. Ohio, Missouri and Kansas each got more than half.

As for the rest of the states, it seems unclear whether they’re in the true Midwest.

If anything, the Midwest is as nebulous as I’d expected. Too often, people refer to vast swaths of American territory as a solid region. It’s easy to break Americans into tribes such as “Midwestern,” but there are more subdivisions and diversity in these groupings than we generally acknowledge.

Except when it comes to the South. The South is more sure about what the South is, as you’ll soon see.