On Tuesday, we published the results of a SurveyMonkey Audience poll about which states people think compose the Midwest. The answer is, essentially, that nobody seems to know — not even self-avowed Midwesterners. So keep arguing.

We also asked SurveyMonkey to run a subsequent poll to determine which states are in the South. Despite a lot of debate about that question as well, these results were more conclusive. Although I think the South starts a few miles north of Baltimore, I am — according to self-identified Southerners — very wrong.

The survey isolated 1,135 respondents who identified “a lot” or “some” as a Southerner and asked them which states are in the South. To get this sample, SurveyMonkey Audience polled 2,528 individuals, about half from a national sample and about half from states considered regionally South, according to the Census Bureau (Florida, Georgia, Maryland, North Carolina, South Carolina, Virginia, West Virginia, Delaware, Alabama, Kentucky, Mississippi, Tennessee, Arkansas, Louisiana, Oklahoma and Texas.)

Here are the percent of respondents identifying each state as Southern: 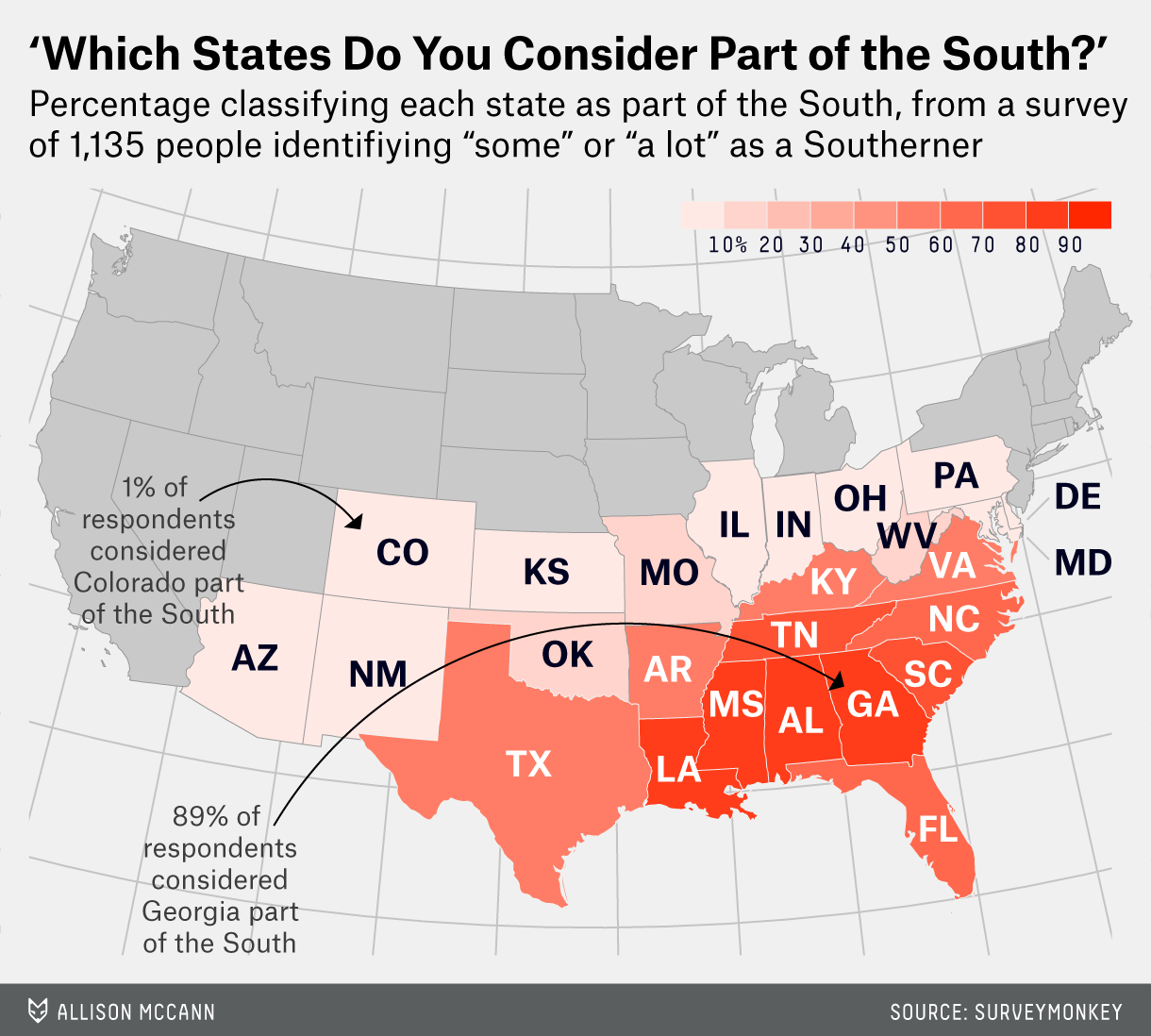 Again, there are several takeaways.

First, the Southerners were considerably more certain of which states are their own. While the top few Midwest states barely pulled 80 percent of the vote, nearly 90 percent of respondents identified Georgia and Alabama as Southern, and more than 80 percent placed Mississippi and Louisiana in the South. South Carolina, Tennessee, Florida and North Carolina all garnered above 60 percent.

Southerners seem remarkably content to mess with Texas, giving it 57 percent support. Virginia, Arkansas and Kentucky hovered at about 50 percent.

Also, Maryland — well and truly — is not a Southern state, according to actual Southerners. It pulled a pathetic 6 percent of the vote. That’s worse than Arizona and New Mexico. Walter White is more Southern than a Marylander. Allow me to welcome you to the North, Maryland. I’ve always loved your well-appointed Interstate 95 rest stops!

Consistent with a tradition of skepticism of the federal government, the South further disagrees with the census designation of what’s in the South. In addition to Maryland, Oklahoma and West Virginia both pulled less than 25 percent support, despite the fact that the census says they’re the South. Take that, big government.

So, what have we learned? Judging by some of the feedback on Tuesday’s blog post, people don’t know exactly where these places are, but they’re certainly passionate about it.

Also, does anyone know what’s going on with Missouri? Mostly excluded from the South and Midwest, it appears to be the geographic equivalent of the last kid picked during dodgeball.