Last week, The New York Times’s Robert Gebeloff and David Leonhardt published an article, “The Growing Blue-State Diaspora,” which made the case that transplants from blue states are making red states purple. “This pattern has played an important role in helping the Democratic Party win the last two presidential elections and four of the last six,” they wrote.

It’s a fascinating hypothesis, but it’s overstated, in our view. The first problem is that the predominant political trend of the past two decades has not been consistently better performance by Democrats, but instead greater polarization across partisan and geographic lines. Remember, the GOP controls the House of Representatives, a plurality of state legislatures and a majority of governor’s mansions, and Republicans are slight favorites to take the Senate in November. Democrats have done well in recent presidential elections, but if Republicans take the Senate and hold the House, then by 2016 the GOP will have had control of the Senate for 12.5 of the past 24 years and the House for 18 of 24.

We’re not saying we’d rather have had Republicans’ hand to play. But the balance of power in the country has been reasonably equivocal, as it tends to be over the long run.

By contrast, the trend toward greater polarization has been clear and sweeping. It’s been clear in races for the House; there are far fewer swing districts than there once were, even after accounting for the effects of gerrymandering. It’s been clear in gubernatorial races, which now bear a much stronger correlation to presidential elections and other races for federal office. And it’s been clear in races for the presidency. In 1992, when Democrat Bill Clinton beat Republican George H.W. Bush, there were no states — none — where either candidate won by 20 or more percentage points. In 2012, there were 18 of them, 11 of which were won by Republican Mitt Romney. A few states (such as West Virginia and Colorado) have switched party loyalties, but for the most part, red states have gotten redder and blue states have gotten bluer; theories about the role played by migration need to reconcile with this evidence.

But this presents a challenge. It might seem to follow that if there’s more mixing of Americans across state lines, then everything might converge to a shade of political purple. Why have we seen the opposite pattern instead?

One part of the answer is straightforward: Interstate migration is not increasing. Instead, it has been on a downward trend since the 1980s; fewer Americans (as a share of the population) are relocating across state lines than a couple of decades ago.

Of course, there are certain states that attract certain types of voters when their job opportunities change — such as in North Carolina’s research triangle, for instance. But as the Times noted, a number of red states (such as Idaho and South Carolina) are home to many blue state transplants yet continue to vote reliably Republican. There’s little sign that’s changing.

If anything, movers generally have more extreme political views than natives: Those people moving to the West Coast or New England, for example, are more liberal than people who grew up there. Thus, the process of intra-country migration could be contributing to political polarization rather than making states more purple.

We can get a sense for this from the General Social Survey, a national biannual poll conducted by the University of Chicago. The GSS asks respondents to rate themselves as liberal or conservative. The GSS also asks which census division respondents live in, and which they lived in when they were 16 years old.

Using the GSS data, we can figure out the percentage of people who consider themselves liberal among different groups:

This method is imperfect: Census divisions don’t overlay perfectly with political regions, and the GSS doesn’t drill down to the state level. Also, although we’ve gathered data from each version of the GSS since 2004, the sample sizes aren’t huge.

Still, the data is enough to suggest that the people moving away from a region are ideologically distinct from those who continue to live there. For example, the people who moved away from the South Atlantic region (which includes a number of fairly conservative states) are as liberal as the people who moved away from New England and other regions. This is despite the fact that only 22 percent of people who stayed in the South Atlantic division consider themselves liberal, compared with 27 percent of Americans overall. 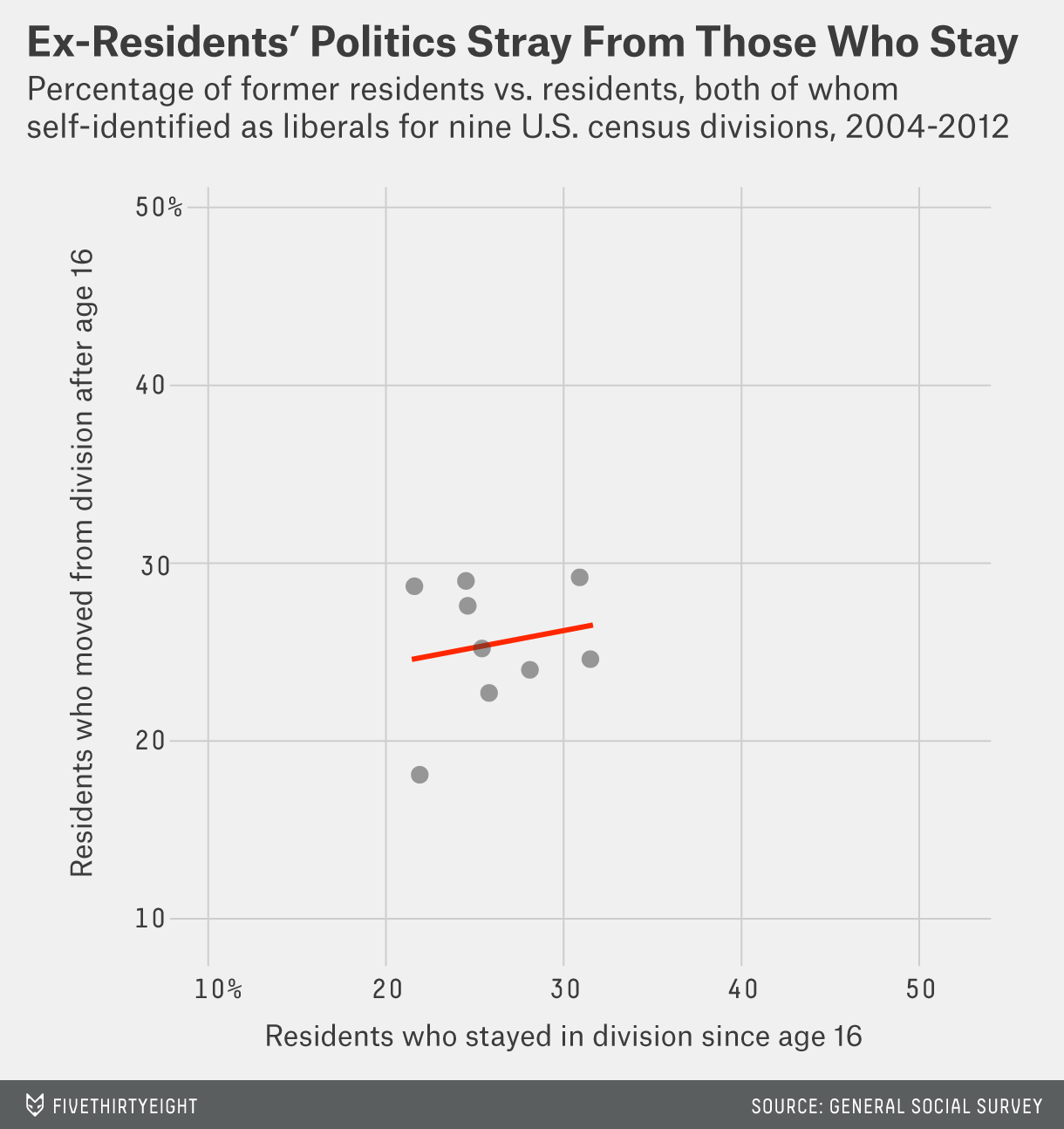 Instead, movers have more in common with their new neighbors; liberals are attracted to liberal regions, and conservatives to conservative regions. As the next plot shows, the politics of long-term residents correlates reasonably well with the politics of new residents. 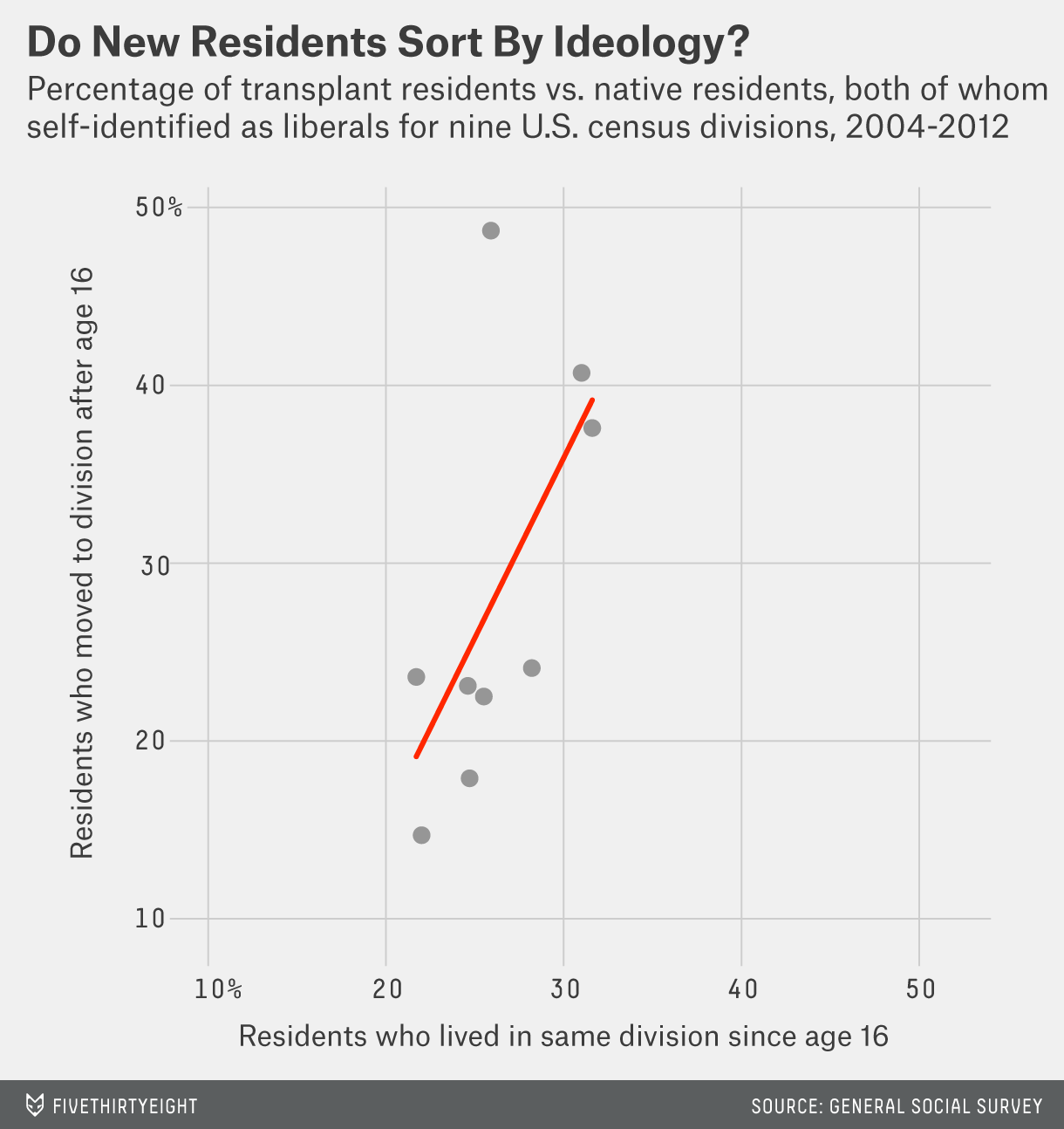 New England makes for an interesting case: It may be migrants who have made the region so blue. Whereas only 26 percent of people who were born and stayed in New England describe themselves as liberal — about the same as the national average — 49 percent of those who have migrated there do. Some of this may be a sample-size fluke (New England has the smallest population of any census division and therefore the largest margin of error). Still, it makes sense given how much bluer New England has become. Vermont was once a reliably Republican state.

Outside of New England, the importance of migration in reshaping political coalitions may be fairly minimal. Most people live in the same region where they grew up, and as we’ve mentioned, those who move tend to adopt the politics of their new homes (or they’ve had those politics all along).

In all census divisions but New England, the percentage of liberals among native residents is within a point or two of that among all residents (after accounting for moves to and away from the division). Other factors may be more responsible for the changing tones of the red-blue political map. 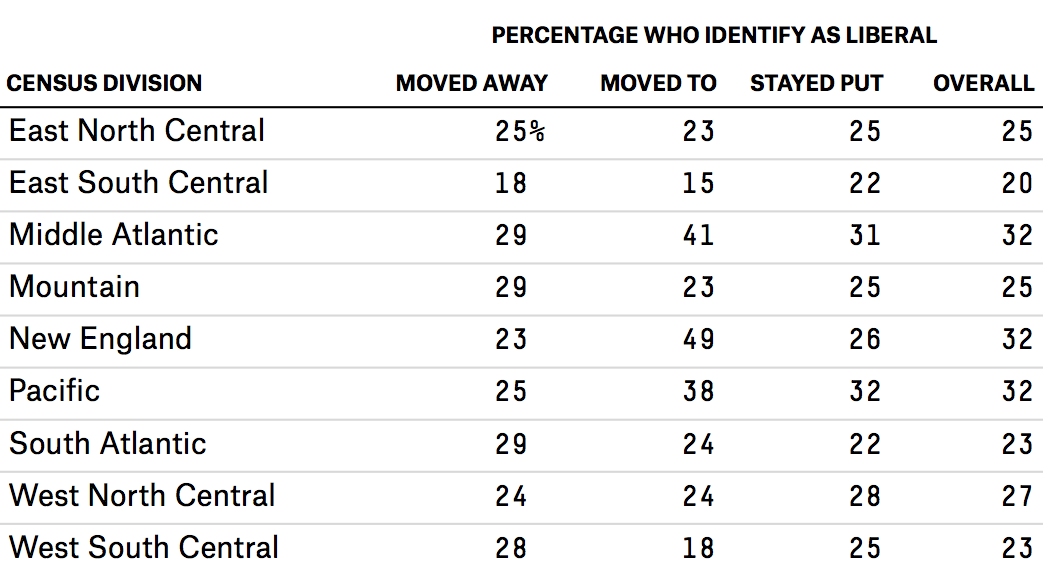 Still, to the extent migration has mattered, it has probably been in contributing to political polarization rather than blurring the country into shades of purple. This fits with the idea proposed in the book “The Big Sort”: People are increasingly living near those who are politically like-minded. A 18-year-old from South Carolina might go to college in Boston if she has liberal political leanings or stay in South Carolina if she’s more conservative. The patterns can be self-reinforcing. If liberal residents are more likely to leave South Carolina, that means a higher percentage of the ones who remain are conservatives.

The “Big Sort” hypothesis has its own problems; it’s unclear how the causality works, for example. Does the 18-year-old become more liberal once she gets to California, or is she more inclined to move to California because she was already liberal? (We’ve been a little slippery about this distinction here.) We’ll be on the lookout for further research, especially for data that looks at states rather than census regions.

But let’s not add the liberal diaspora to the emerging Democratic majority theory yet.