As my colleagues have pointed out on DataLab, FiveThirtyEight readers are great.

The latest example: One perceptive reader saw my article about the slowdown of Major League Baseball games and suggested that the designated-hitter rule might explain why the slowest teams are in the American League, whose clubs play with the DH in their home ballparks. I looked into that last week and found no evidence the DH was slowing down the sport. But that article prompted two more readers to contact me (Alex Hickey, by email, and Jonathan A. Jensen, via Twitter). They’d noticed something I’d mentioned offhand in the post: that the two fastest-paced AL teams from 1997 to 2013 were the Chicago White Sox and Toronto Blue Jays. Those teams have one pitcher in common: Mark Buehrle, the fastest thrower in the major leagues.

Since 2008, the first year for which FanGraphs has reliable data, Buehrle has been, by far, baseball’s fastest worker between pitches. Over nearly 1,300 innings, he’s averaged 16.7 seconds between pitches. The next fastest pitcher with at least 150 innings pitched, Ben Sheets, averaged 18 seconds. The major-league average has been 21.8 seconds. 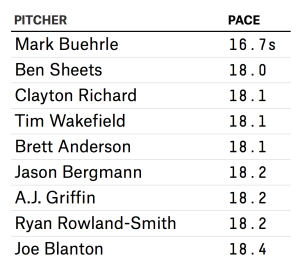 Even as just one starter, Buehrle’s blistering pace has shaved significant amounts of time from games. If we assume he was 5.1 seconds faster in delivering each pitch during his career, then he’s spared baseball fans nearly 63 hours of dead time between pitches, and cut between 1.6 and two minutes from his team’s average game length each year since his first full season, in 2001. That’s over all of his team’s games, not just the ones he’s pitched.

A difference of two minutes is significant. In my article on the topic, I calculated that the slowest team in baseball over Buehrle’s career, the New York Yankees, added about 14 minutes per game relative to the fastest team, the Oakland Athletics, after controlling for number of pitchers, number of pitches per plate appearance and other factors.

Another way of looking at Buehrle’s impact on pace is to check how his teams rank in speed each season. As it happens, I compiled these rankings for my first piece, from 2002 through last season. Buehrle was with the White Sox for the first 10 years of that period, and the White Sox were one of baseball’s three fastest teams in five of those 10 seasons; the White Sox ranked among the 10 fastest teams in all but one season. Then Buehrle went to Miami for one season, and the Marlins went from being the majors’ ninth slowest team to its eighth fastest. Last year, Buehrle moved to Toronto, and the Blue Jays went from the 12th fastest team to the very fastest in the majors.

One very preliminary finding from these team rankings: Buehrle’s speed-up effect seems to persist even after he leaves. In the first year after Buehrle’s departure, the White Sox were the fastest team in the majors. Last year, they ranked 10th. And Miami, in its first season after Buehrle’s exit, was the majors’ third-fastest team.

That the teams stayed faster after he left may also suggest other factors besides Buehrle were contributing to the quicker pace all along. On the other hand — it’s just speculation — perhaps Buehrle’s teammates have noticed that his fast pace has coincided with a successful and consistent career. His philosophy is that catchers know more about opposing batters than he does, so he rarely shakes off their pitch calls. “They’ve been around the league and have faced these guys,” Buehrle said of his catchers, in an interview with USA Today in 2005. “Sometimes I don’t pay attention to what hitters’ tendencies are. … They see their tendencies, so I just go with what they say.”

Another theory about the persistence of Buehrle’s fast pace: Buehrle tries to persuade his teammates to match his fast pace, for his own sake as a viewer of their games. “It’s when I’m sitting out here on these four days in between starts, I’m like, ‘All right guys, I always have a quick game and you guys get out of here quick. I want to have a quick day sometimes when I’m on the bench,’ ” he told the Toronto Star last week.

Buehrle might be even faster if he didn’t have to wait for stalling batters. “It’s annoying,” Buehrle told the Boston Globe last year. “Guys don’t even swing the bat, take a pitch, and then they get out and adjust their batting gloves. Some of it might be just habit or routine or superstition that they do it, but you didn’t even swing the bat — why do you have to tighten your batting gloves?”

This year is Buehrle’s fastest yet: He’s averaging just 15.8 seconds between pitches. It’s also on pace to be his best season: He’s 4-1 with a 2.16 ERA, even after getting shelled by the Boston Red Sox on Friday. His opponents don’t appreciate his stinginess, but they do like his speed. “When he’s pitching, you can set dinner plans and you’re pretty sure you’re going to make them,” Baltimore Orioles center fielder Adam Jones told the Star.