Nearly a month ago, we launched our first interactive feature, a visualization of FiveThirtyEight’s NCAA tournament predictions. We were happy to hear that people thought it was “fun, cool.” But we were especially pleased to learn that some readers wanted the data behind the bracket to be made public:

@mathisonian Hey Matthew, is the raw 538 bracket data available anywhere? In a Google Spreadsheet or something?

We started publishing the probabilities on GitHub each time we updated the bracket — whether that was after a game or after, say, a player was injured. Readers helped us to check our work, pointing out mistakes we made while updating the bracket late into the night. But some readers also used the data to make visualizations and programs of their own.

As often as possible, we’ll be publishing our data and highlighting the interesting things people do with it.

For example, reader Bill Mill remixed our prediction data into a visualization that displays the win probabilities for each team as parts of a circle:

Another reader, Ben Walker, wrote a Javascript program that simulates flipping coins to turn our probabilities into an actual bracket. 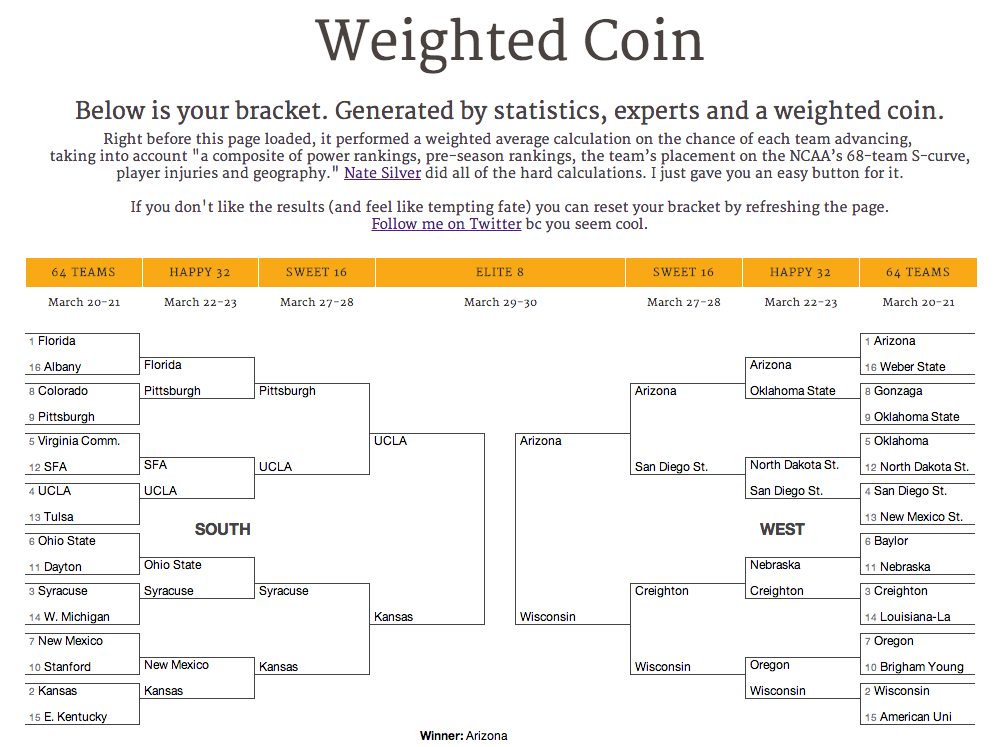 And Kyle Barrow created a Python script that runs simulations and generates brackets from our probabilities.

Now that the UConn Huskies are the 2014 NCAA champions, and all of the win probabilities produced by our model are on GitHub, we decided to do some remixing of our own. We combined images of our probabilities at the end of each day of tournament games into a single animation that shows how those probabilities changed as the tournament played out. Behold the world’s tallest GIF: