The University of Connecticut’s men’s and women’s basketball players won a pair of national titles this week, repeating the feat of their Huskies predecessors in 2004. The championships moved UConn into an indisputable lead as the most successful overall Division I college basketball program, when accounting for men’s and women’s achievements.

UConn’s men’s and women’s teams, combined, have the most titles, the most tournament wins, the highest winning percentage and the highest average margin of victory in the NCAA tournament in Division I since 1951. The race was a close one until a few weeks ago, but UConn’s success this year coincided with stumbles by its two closest rivals in the category: Duke and Tennessee. It’s a remarkable achievement for UConn, which two decades ago hadn’t won any Division I basketball titles, men’s or women’s.

UConn, Duke and Tennessee all entered two teams into tournaments this March. Four of the six teams were seeded third or better, and the two exceptions — UConn’s No. 7 men and Tennessee’s No. 11 men — were underseeded, according to FiveThirtyEight’s model. UConn went 12-0, while Tennessee’s teams won four games from the round of 64 on (plus a play-in win for the men). The Duke teams combined for just one win.

If Duke had run the table while UConn disappointed, Duke would lead UConn in tournament wins and winning percentage. Tennessee could have led in winning percentage if its men’s and women’s programs had won titles, and UConn had struggled. UConn, though, would still lead the trio in titles. Its only real competition there is UCLA, which could have passed UConn with a men’s title.

But the Bruins’ success has hardly been balanced: UCLA has won as many titles in the men’s tournament as it has won games in the women’s tournament. In fact, outside of Storrs, Conn., and a trio of Atlantic Coast Conference schools — Duke, North Carolina and Maryland — few of the leaders in combined basketball success have been truly successful in men’s and women’s hoops. Tennessee has a losing record in the men’s tournament even after this year’s run, and Stanford gets most of its wins from the women’s side.

Kentucky, Kansas and Florida, meanwhile, have had little women’s success. Nonetheless, they appear on our list of the most successful combined programs, showing the teams with at least 10 wins in the men’s and women’s NCAA tournament since 1951 who have the best combined winning percentage in the tournament during that period. Other programs that have achieved a great deal in basketball didn’t even make the first cut, notably Georgia (little men’s success) and Michigan and Syracuse (little women’s success). 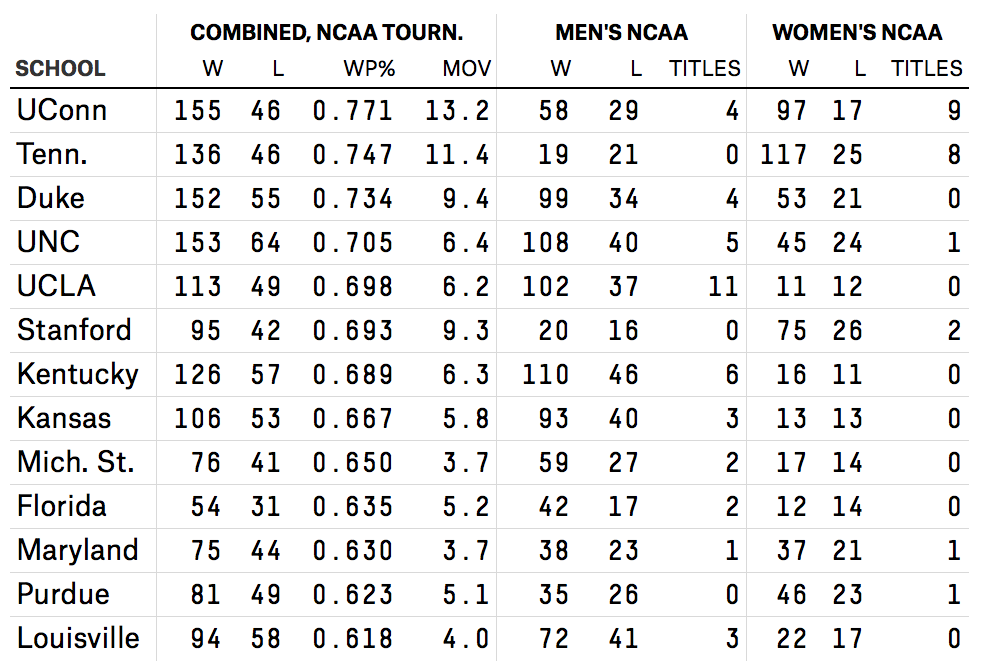 Methodology alert: I’m counting the entire history of the women’s tournament, plus the men’s tournament since 1951, which is roughly when it superseded the National Invitation Tournament as the premier season-ending event. Including the earlier games and titles would make little practical difference because the tournament fields were so small — the NCAA men’s tournament through 1950 included just 111 games, compared with an overall total of men’s and women’s tournament games of nearly 5,000. I’m including the so-called play-in or first-round games introduced in 2001 since similar opening rounds counted as official games in earlier tournaments with field sizes that weren’t exponents of 2. Data comes from ESPN Stats & Information and, for this year, from the ESPN.com men’s and women’s brackets.