Major League Baseball is slowing down at the same time that its formerly slowest team is speeding up.

The New York Yankees haven’t dominated the majors since 2002, winning just one world championship over that period. But they’ve dominated MLB rankings for length of game. From 2002 to 2012, the Yankees’ average length of game was in the top four of the 30 major league teams each season, including five league-leading performances. Yet lately they’ve gotten faster: The average Yankees game has been shorter each year than the year before since 2009, culminating in last year’s 15th-place showing of three hours and five minutes — just half a minute longer than the league-average figure.

Boston is part of a broader trend that the Yankees are defying: Baseball games are getting longer. Games averaged two hours and 56 minutes in 2011 and three hours flat in 2012. They tacked on four more minutes last year — even as runs per game fell, to 4.17 from 4.32 the year before. And games this year, with the advent of instant replay, have added another three and a half minutes on average, through Sunday. 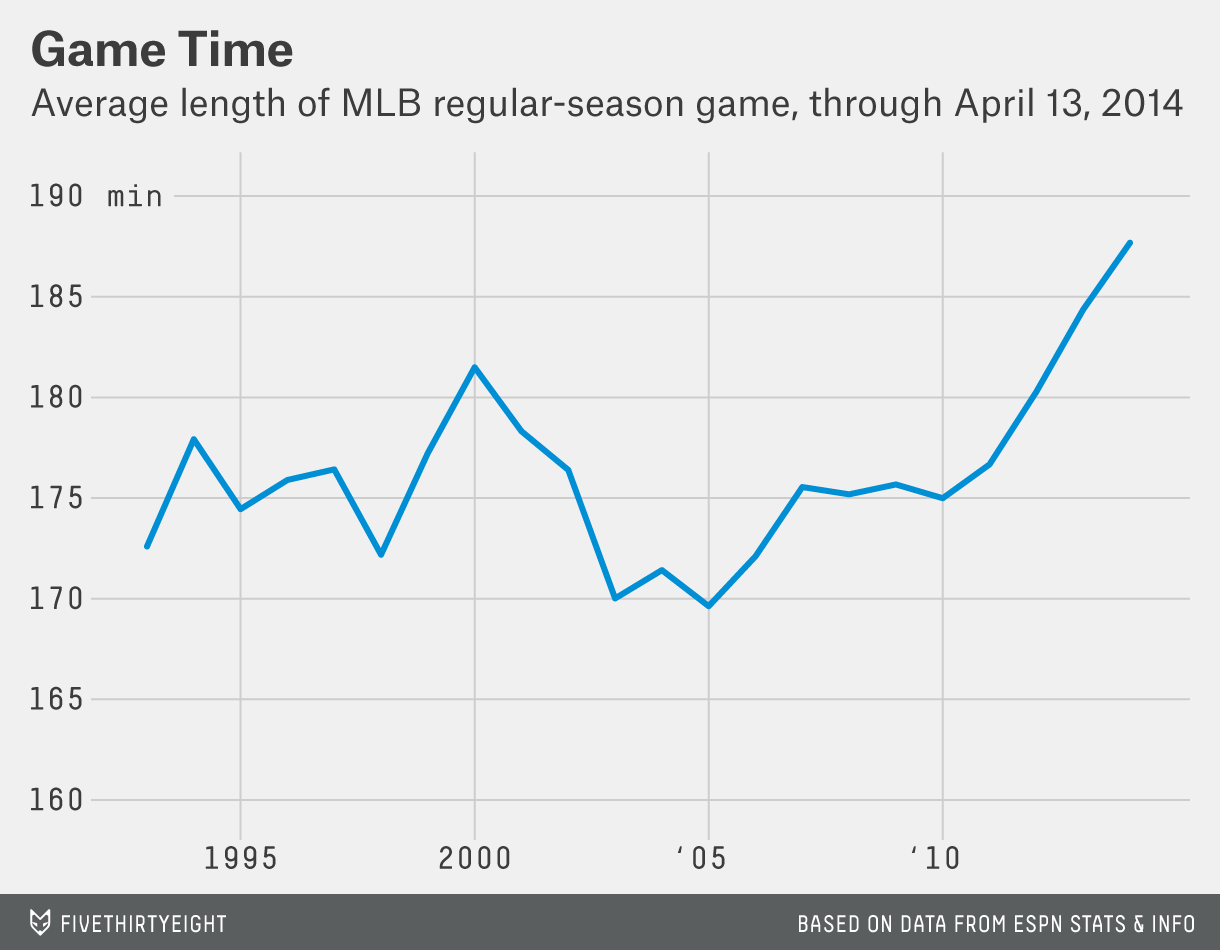 When the two slowest teams of the modern era meet, great baseball often results. Slow baseball almost always does. The three Yankees-Red Sox games last weekend each took over three hours — and each was faster than the average Boston-New York meeting since 2002.1 Those games have averaged three hours and 23 minutes — 15 minutes longer than the next slowest matchup with at least 100 games during the period (Yankees-Angels). 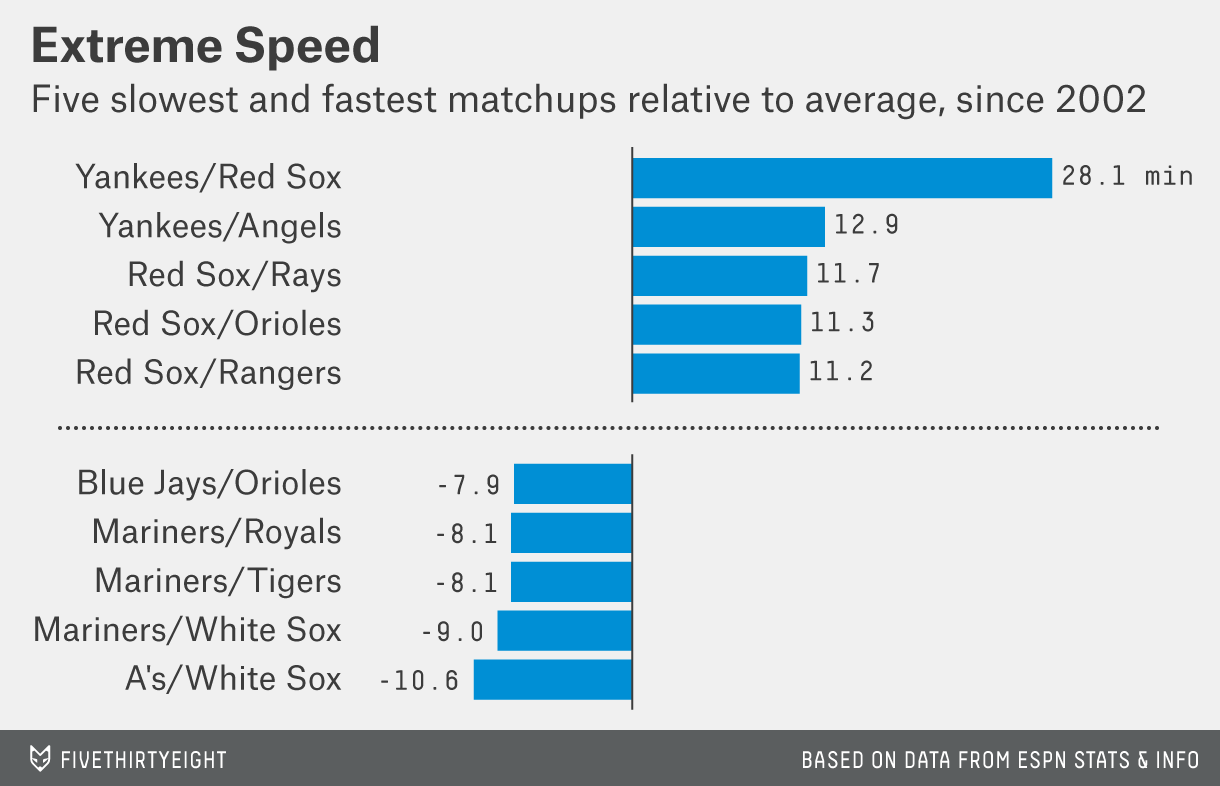 When staging such a great rivalry, former Boston closer Jonathan Papelbon asked in 2010, what’s the hurry? “Have you ever gone to watch a movie and thought, ‘Man, this movie is so good I wish it would have never ended’? That’s like a Red Sox-Yankees game. Why would you want it to end?”

Many factors fundamental to baseball influence game length: Batters’ rate of getting on base safely, their plate discipline, and how long they take to round the bases after a home run. Boston’s David Ortiz regularly tops the leaderboard for longest tater trots, which contributes to the glacial pace of an average Red Sox game.

Another influential factor has to do not with the action, but with the time in between plays. Pitchers stare down base runners or wave off signs from catchers. Batters step out of the box and adjust their helmets and other gear. The time between pitches is getting longer. We know because of a byproduct of the sophisticated PITCHf/x tracking system installed in every major league park that stamps a time on every pitch. FanGraphs turned those timestamps into a stat, called pace, measuring the time between two consecutive pitches in the same plate appearance.2

The pace is slowing. The average break between pitches was 21.6 seconds three years ago, 22.1 seconds two years ago and 22.6 seconds last year, according to FanGraphs. Taking into account the number of pitches per game, the slowing pace could account for five of the eight minutes tacked on to the average game between 2011 and 2013.

Boston slows things down when at bat and on the mound. Last year, Red Sox batters ranked second in time between pitches, with 23.5 seconds. (The Yankees ranked first.) And Boston’s pitchers ranked seventh at 23.4 seconds between pitches. No individual player was particularly responsible for the Boston slowdown; only reliever Junichi Tazawa ranked high on the pitcher or batter leaderboard. It was a team effort.

The reasons for lengthening game times have been a longstanding baseball preoccupation. “No one element accounts for the delay of game. Some developments, such as extended commercial breaks and the tendency to use more pitchers, are more obvious,” the St. Louis Post-Dispatch reported — in 1991.

Just how much does any one team, or any one attribute such as pace, affect game length? I ran a linear regression to check. ESPN Stats & Info provided detailed data on more than 29,000 regular-season games, between 2002 and this past Sunday. I checked how the teams involved contributed to game length, while controlling for year, number of innings, number of relievers used, runs per inning, plate appearances per inning, pitches per plate appearance and closeness of score.3 (I didn’t control directly for other factors, such as the number of pickoff attempts or pinch-runners, or the big increase in defensive shifts in recent years.)

The result: The Yankees added 13.9 minutes to the average game, relative to the fastest-paced team, the Oakland A’s. Runner-up Boston added 10.5 minutes.4 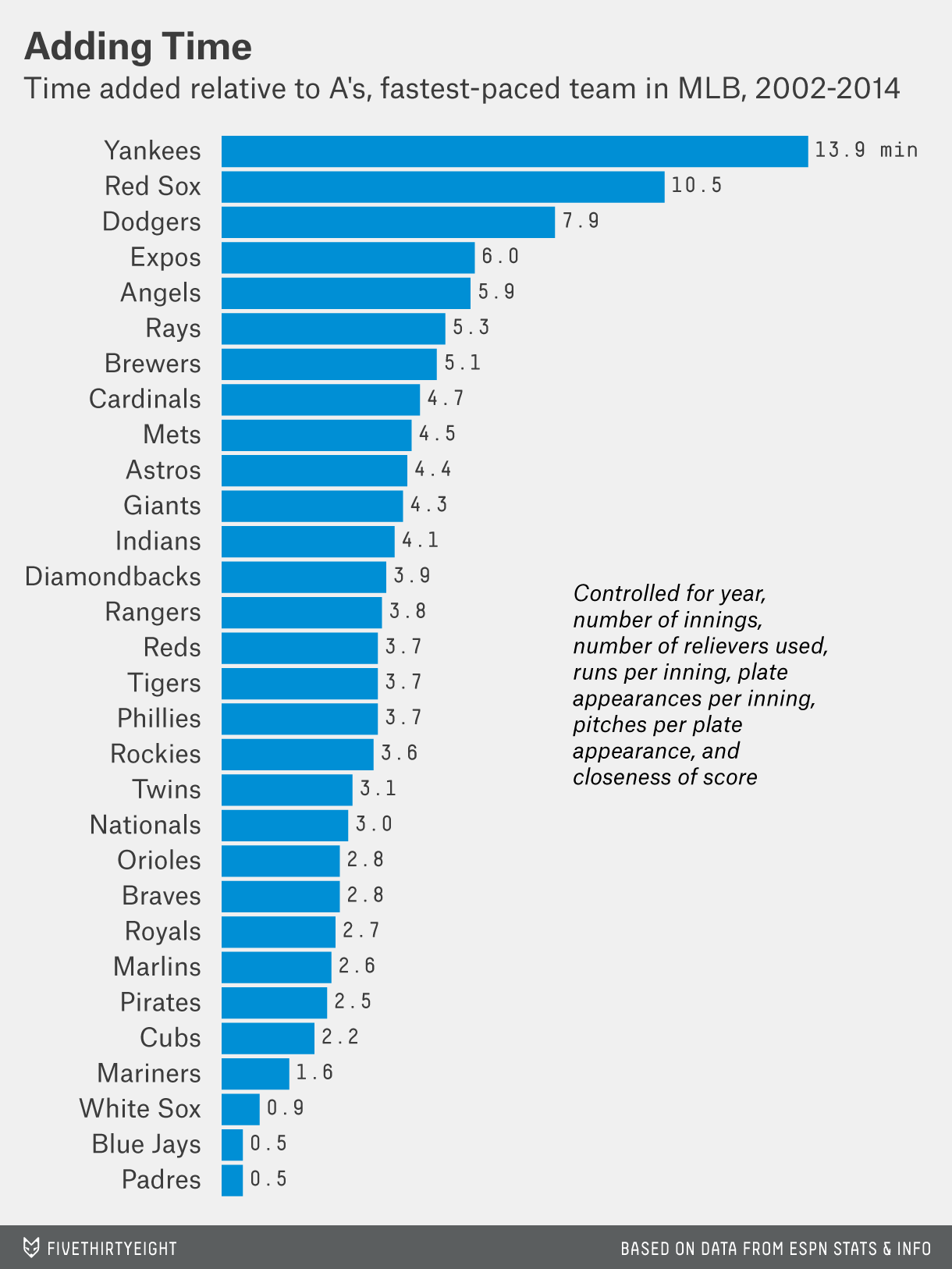 These, again, are the results after controlling for attributes of the game. But those play a role, too. Each extra inning in a game makes it about 18 minutes longer. Each additional call to the bullpen adds a little over two minutes. Every additional plate appearance per inning tacks on nearly 21 minutes, and an increase of one pitch per plate appearance increases game time by half an hour.

The more time passes, the more time passes: The length of games has grown 0.7 minutes on average each year since 2002, after controlling for other changes in the game. And all else equal, close games take a little longer: A minute more time for every run shaved off the final margin.

All of these factors are highly statistically significant,5 which isn’t hard to accomplish with a data set this large.

The pace stat is available, and reliable, going back only to 2008. So I also took a closer look at the games between 2008 and 2013. The overall trends, after running the same regression, were similar: The Yankees continued to rank No. 1 despite their speed-up toward the end of the period, adding 12.8 minutes per game relative to the fastest team in the period, fellow AL East team Toronto. The Red Sox ranked second, adding 11.8 minutes per game.

These teams’ slow pace of play explained some, but not all, of the time their presence added to games. I added another variable to the regression: an estimate of how much time the two teams in the game were adding to it based on their average pace, at bat and on the mound, during the six-year period.6 Controlling for that, Boston was just three minutes faster than Toronto, which remained the fastest team. The Yankees added about six and a half minutes, which is a lot of dead time, but a lot less than 12.8 minutes.

Major League Baseball has a rule to keep the game humming along: Official Rule 8.04, which gives the pitcher 12 seconds to pitch when no one’s on base. It’s rarely enforced — about 15 to 20 times in 2009.

Without stricter enforcement, baseball might get slower. Any new innovation by one team that proves successful is copied by rivals — hence the growing price tag for on-base percentage. And the Yankees and Red Sox, the two slowest teams since 2002, are also by far the winningest teams in that era. The Dodgers and Angels, next in the rankings, both are in the top eight in wins. Slowing down the game from pitch to pitch, for whatever reason, is correlated with winning games.7 Correlation isn’t causation, and there’s no particular reason slow play should equal good play. But Yankees fans might not want to take any chances: Their team, in its fastest-paced season of the last 13 years last year, had its lowest win total of the period.