What’s O’Hare got going for it? A nice public transit connection to downtown Chicago. Cool architecture. The PA announcements sound like Chicago instead of a generic newscaster. The signage is good. It’s pretty clean. There’s Tortas Frontera!

There’s just one big problem. O’Hare Airport is a nightmare for delays. Between bad weather and congested air space, the airport adds, on average, 14 minutes to every departure and 20 minutes to every arrival. That’s 34 extra minutes every time you take a round trip from O’Hare or connect through it. Among major U.S. airports, only Newark, JFK and LaGuardia are slower, according to FiveThirtyEight’s fastest flights analysis.

So I understand why O’Hare constantly appears on “worst airports” lists. Particularly if you only need a connecting airport — with no time to grab a torta or ride the Blue Line to the Loop — it will often be worth avoiding, if you can.

But if you separate delays from everything else you experience at an airport, you can find the airport’s underlying virtues (or faults). It’s not O’Hare’s doing, exactly, that Chicago has bad weather, or that both United and American decided to place a hub there, which substantially adds to the congestion.

Here’s one way to do that. For each airport that the Federal Aviation Administration classifies as a “Large Hub” — those are the 30 busiest airports in the country — I compared the average Yelp review over the 12-month period from May 2014 to April 2015 to its FiveThirtyEight delay statistics over the same period.1 As you might expect, there’s a relationship: 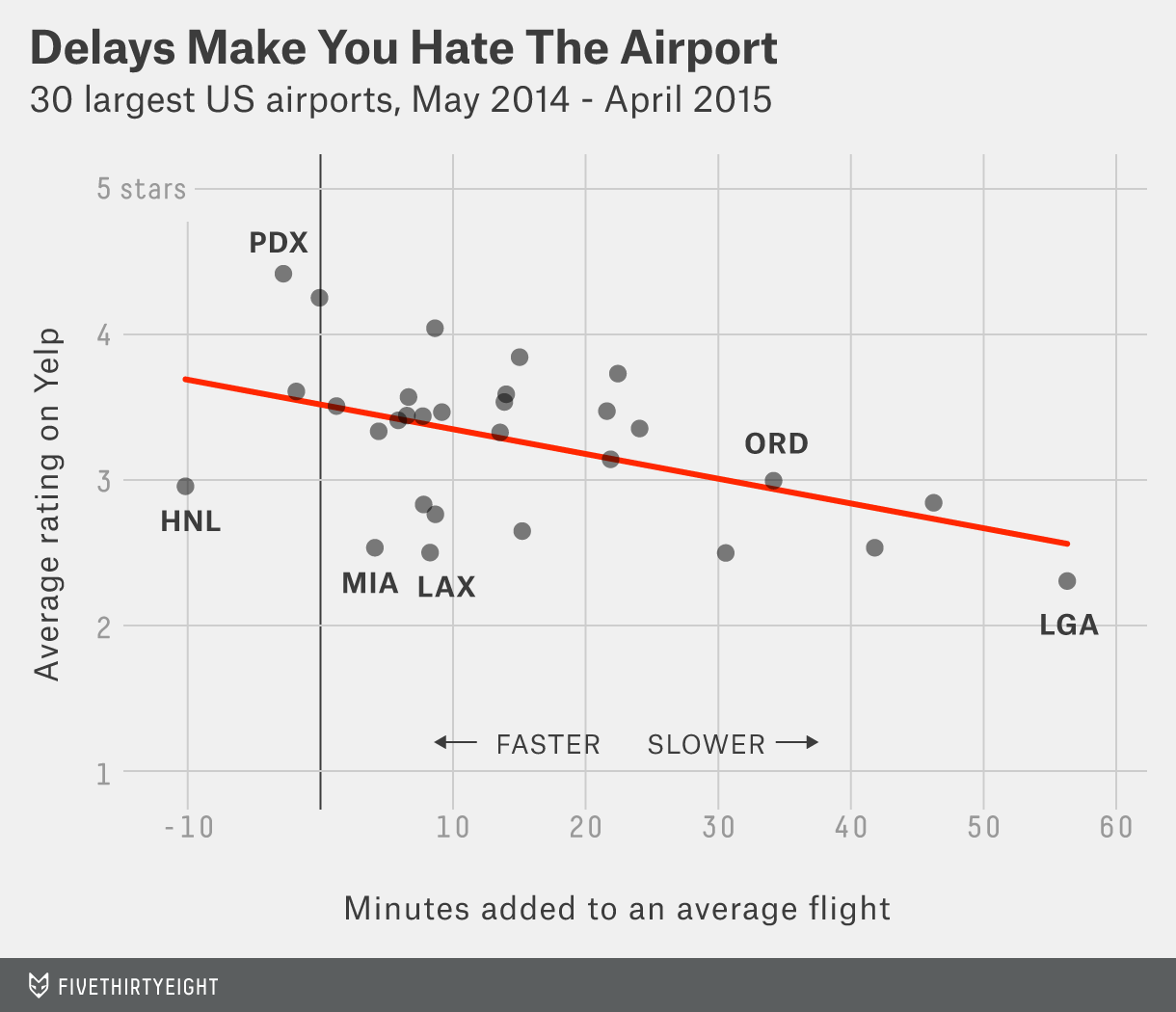 For every additional 10 minutes of delays, an airport’s Yelp rating declines by about 0.2 stars. I strongly suspect the relationship is causal.2 Delays suck and also make every other aspect of the airport experience worse: Long lines become longer and surly people become surlier, even if your flight is one of the lucky ones getting away on time.

So while O’Hare’s Yelp rating isn’t good — 20th among the 30 largest airports — it also isn’t so bad considering how delay-prone it is. According to the regression line in the chart I just showed you, we’d ordinarily expect an airport with delays as bad as O’Hare’s to be rated at 2.9 Yelp stars. O’Hare’s actual rating is 3.0 stars. Once you control for delays, in other words, Yelp travelers rate the other aspects of O’Hare as about average or even slightly above-average.

The best contrast to O’Hare is Honolulu International Airport (HNL). It’s also rated a mediocre 3.0 stars on Yelp — even though flights are almost never delayed there. To get such a mediocre rating despite so few delays implies that Honolulu otherwise has to be a poor airport. And it is, at least in my experience. It’s basically what would happen if they took LaGuardia and put it in paradise. HNL is oddly laid out, there are very few places to eat or drink, the rental car lines are miserably long, and while some parts of the airport are outdoors, the insides are pretty dingy. Fortunately almost everything else about Hawaii is pretty great.

To be more precise about this, I estimate that Honolulu’s lack of delays add about 0.4 stars to its Yelp rating. But its poor facilities subtract about 0.7 stars from it, leaving it with a somewhat below-average rating overall. I’ve run this calculation for all 30 airports in the chart that follows: 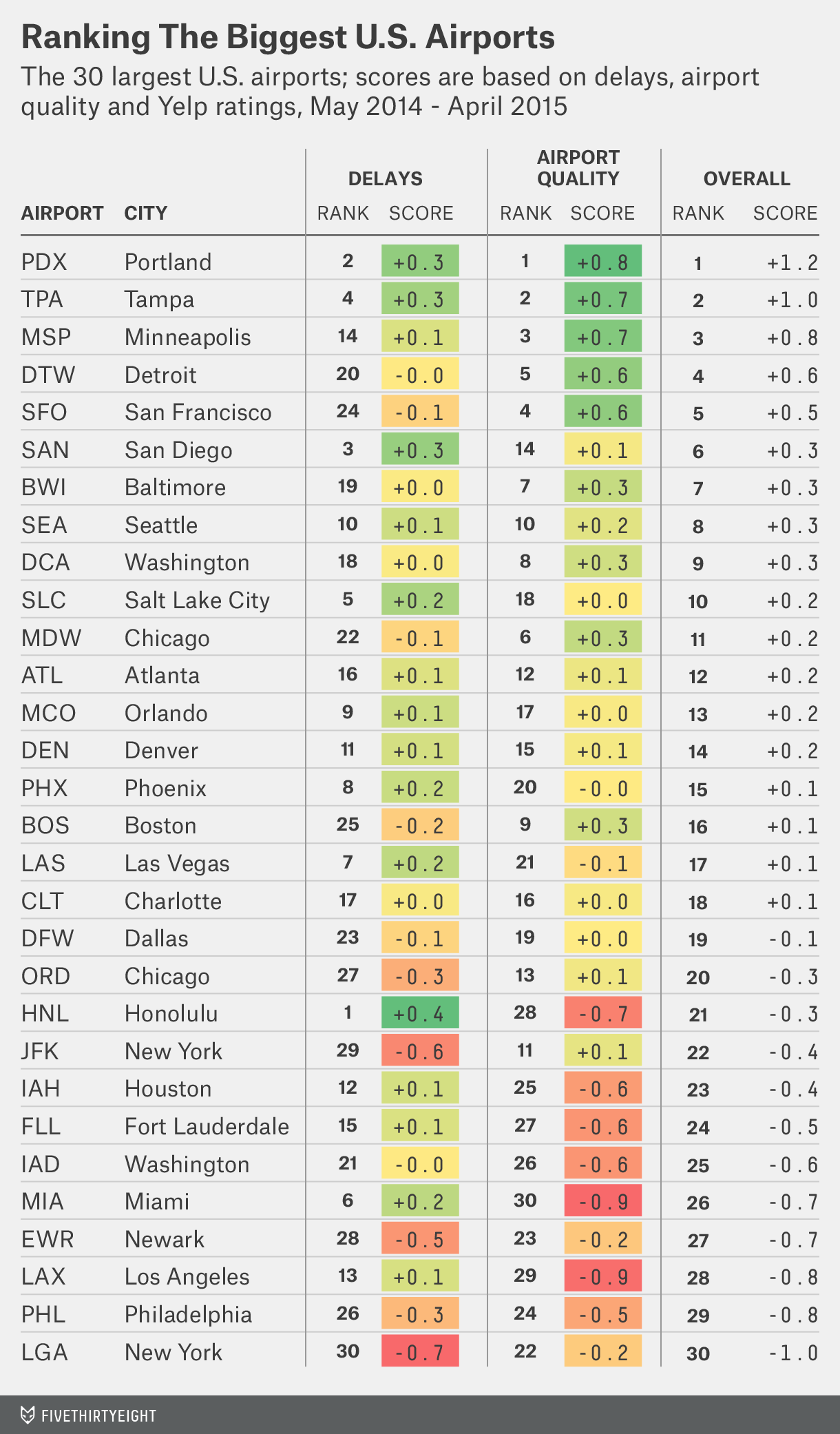 After that, however, you begin to see some differences. San Diego has the 6th-best Yelp rating, but that’s mostly on account of its lack of delays. In the residual (everything-but-delays) category that I call “airport quality” in the chart, San Diego is about average, ranking 14th. The same general theme holds for Salt Lake City and Orlando. These are totally pleasant, adequate airports, but the fact that flights are rarely delayed there makes them seem a lot nicer.

By contrast, some northeastern airports move up the list. Boston’s Logan Airport is in the middle of the pack overall, but that’s a matter of bad delays counteracting otherwise-pretty-nice facilities; it ranks 9th out of 30 for airport quality. JFK ranks 29th for delays, but 11th for airport quality.

So which airports really are the worst? LaGuardia has the lowest Yelp rating, reflecting its combination of awful delays and out-of-date facilities.

But for airport quality alone, Miami International — a disorganized mess that recalls the worst characteristics of a shopping mall and a Department of Motor Vehicles office — ranks last. Mercifully, flights usually leave MIA on time, so if you can make it to your gate you can get the hell out.