Er … actually you can. But for many New Yorkers, a journey to LaGuardia and a taxi ride are synonymous. There’s no train or subway connection to the airport, and while there’s a bus, most routes require multiple connections and an hour or more’s travel. So, in transit-friendly but time-conscious New York, only a small fraction of passengers arrive at LaGuardia by public transit.

New York Gov. Andrew Cuomo hopes to change that. On Tuesday, he revealed a proposal that would build an AirTrain connection from LaGuardia to Mets-Willets Point station, which serves the subway’s 7 train and a branch of the Long Island Rail Road.

Cuomo’s plan has received a tepid response from public transit geeks such as Benjamin Kabak of the blog 2nd Ave. Sagas. The problem is that the proposed AirTrain would initially route Brooklyn- and Manhattan-bound travelers in the wrong direction — farther into Queens — requiring them to double back to reach their destinations and reducing any potential time savings. Kabak and others would prefer a route that runs south from LaGuardia toward Jackson Heights, or that extends the N train to reach the airport from Astoria, Queens as Rudy Giuliani proposed in the 1990s. (The plan died because of community opposition.) The map below, by Yonah Freemark at The Transport Politic, shows the proposed routes. 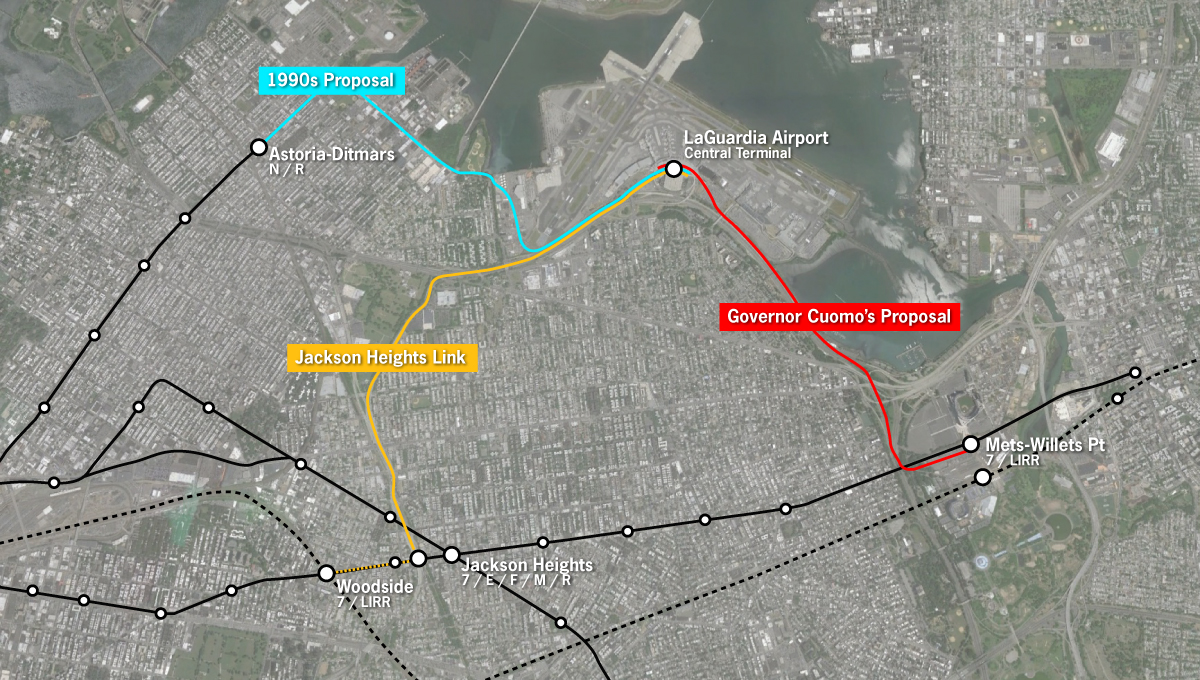 So, Cuomo’s AirTrain — if it gets built — would be far from the platonic ideal of airport travel embodied by the Heathrow Express, which whisks travelers from Heathrow Airport to London’s Paddington Station in 15 minutes. (The same trip can easily take an hour or more by car). But LaGuardia is not alone in offering meager public transit options. In fact, the choices there are pretty average compared with other U.S. airports, including the other airports that serve New York.

By public transit, an average weekday journey from LaGuardia to New York City Hall in downtown Manhattan requires 65 minutes, according to an analysis of Google Maps data. A trip from Newark Liberty Airport to downtown Manhattan also takes about 65 minutes on public transit; one from John F. Kennedy Airport takes about 75 minutes. (These estimates account for waiting and connection time; more details on the methodology in a moment.) In each case, a taxi journey will usually be slightly faster, although this depends greatly on traffic — especially from JFK.

At some other airports, public transit isn’t really an option. On average, it would take more than two-and-a-half hours to get from the Detroit Metro Airport to downtown Detroit, accounting for waiting time. Detroit, as in so many other respects, is something of an outlier. But there are not many major U.S. airports at which a journey downtown is as fast by public transit as it is by car. And there’s perhaps only one at which it’s predictably faster.

I took whichever route Google Maps said would get me downtown soonest but counted the time spent waiting for the bus (or train) to arrive. For instance, if for an 8 a.m. arrival the fastest way to get downtown is via a bus that leaves the airport at 8:15 and arrives at 8:45, that would count as a 45-minute trip.

The equation can be complicated. Waze’s predictions do not specify a day of the week; because I used a weekday schedule for public transit, I also increased car travel times by 10 percent to account for heavier weekday traffic. And just as a train doesn’t always materialize right when you want one, neither does a private car; unless you have a really nice friend or a really fancy limo service ready to pick you up curbside, you’ll have to spend some time waiting for a taxi or a rental car or getting to a parking facility. It’s hard to come up with a one-size-fits-all estimate for how long this takes,4 but I’ve added 10 minutes to the Waze travel times to account for it. The comparison between driving and public transit for the 40 busiest U.S. airports is below.5 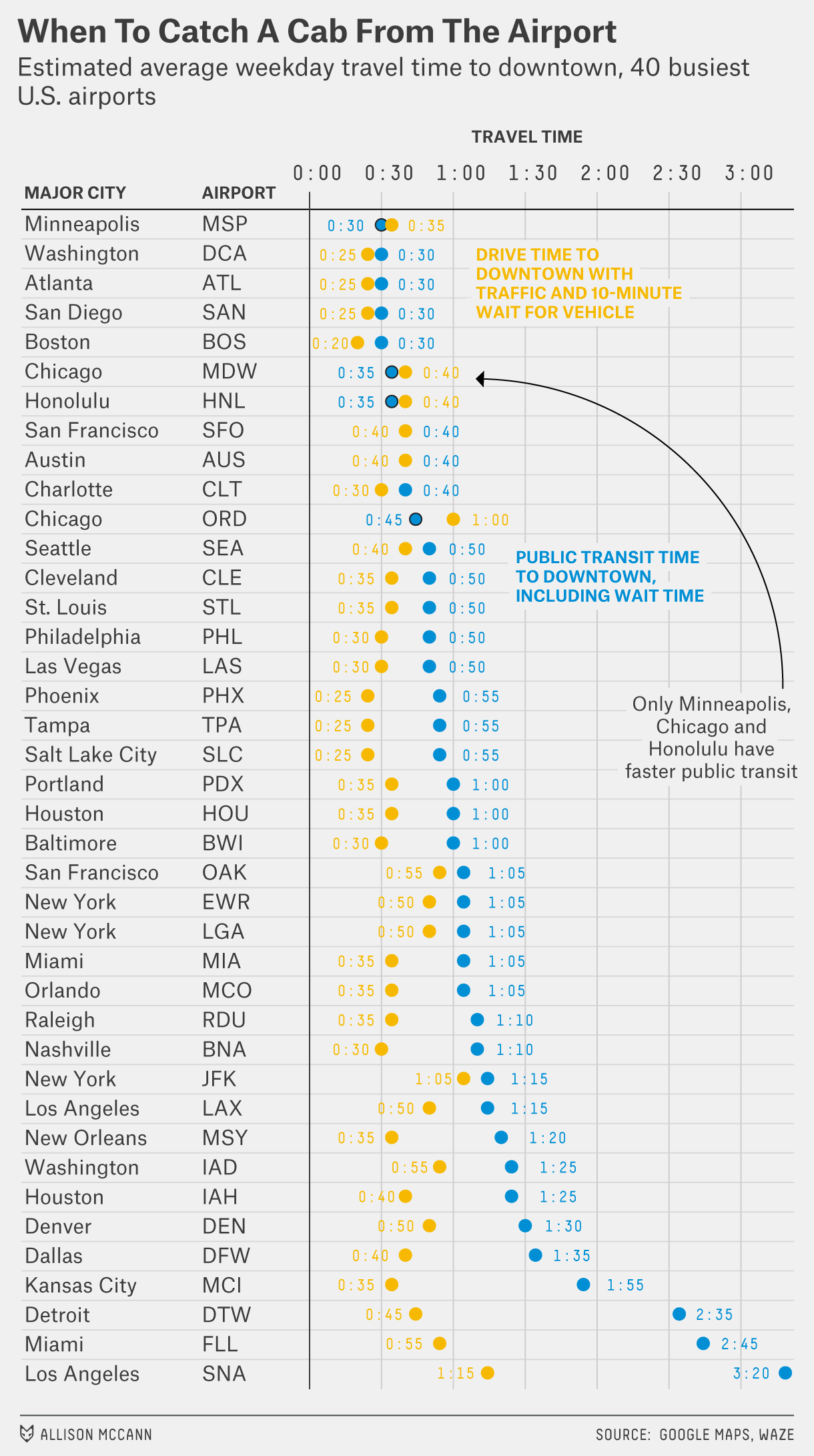 These travel times are a rough guide; you should check conditions upon arrival at the airport. But they should provide a sense for where public transit is competitive with or potentially superior to a trip by private vehicle, at least from the perspective of time saved. (It’s up to you, of course, how to balance time savings and cost, comfort and other factors.) We can group the cities into a few major categories:

Both options are good. Boston, Atlanta and Washington’s Reagan National Airport offer excellent public transit links to the central city. But that’s partly because these airports are conveniently situated to downtown. Driving can be extremely fast, too, or even faster. In Minneapolis, likewise, a light rail system covers the 10-mile distance between the airport and downtown frequently and quickly. But Minneapolis traffic usually isn’t bad, so a car can be a good option.

As I mentioned, you should be in the habit of checking out your transportation options given traffic conditions upon arrival. (It’s a fun way to pass the time when you’re stuck on the tarmac because that 737 is blocking your arrival gate.) But San Francisco International and Chicago’s Midway are two airports where this is especially important. At each one, travel times by car are about as fast as those by train on average. But while public transit times are fairly constant, a car trip downtown can take anywhere from 20 minutes to an hour or more, depending on traffic.

Public transit can be competitive but sometimes doesn’t run frequently enough. St. Louis and Philadelphia belong in the “honorable mention” category. A journey on SEPTA’s Airport Line to Philadelphia City Hall takes just 25 minutes, but the Airport Line runs only once per half-hour. St. Louis’s MetroLink, a light rail system, offers transit times downtown that are competitive with driving if you catch the trains at exactly the right time. But the trains are spaced out by more than 20 minutes for much of the day.6

Driving is fine; public transit stinks. I already mentioned Detroit, where a journey downtown by public transit clocks in at 2 hours, 35 minutes. Detroit’s Metro Airport is a fair ways from downtown Detroit, but a journey by car there is considerably faster at 45 minutes.

The major airports in Houston, Dallas and Miami abide by the same pattern, as do those in most midsize cities in the South and Midwest, including Kansas City and New Orleans. These are car-dominated cities, and the public transit options from the airport are no better than you’d expect.

Then there are the airports where a car journey downtown is cumbersome but a trip by public transit is even worse. Some of them, like Dulles International Airport in suburban Washington, deserve a mulligan because the airports are designed more for suburban travelers than for those headed to the central city. You’d have to have gotten a hell of an airfare to voluntarily fly into John Wayne Airport (SNA) in Santa Ana, Calif., if you were staying in downtown Los Angeles, for instance. But if you decided to take public transit from SNA to downtown LA, it would take you three hours, 20 minutes.

Denver International Airport is notoriously far from the center city despite being the only major commercial airport there. For the time being, however, you’ll probably want to buck up and take the taxi. Our method estimates that a car trip to downtown Denver will take 50 minutes vs. an hour and a half on public transit.

This will change once Denver completes the East Rail Line, which projects to make the journey downtown in just 35 minutes. Los Angeles may also one day have a train connection to LAX airport; a car will usually be the least-worst option in the meantime.

Both options stink. In a few other cities, traffic can be so bad that a journey by public transit is worth checking out even if it isn’t that quick. JFK and Newark, as I mentioned, fall into this category. While a journey to downtown Manhattan from JFK projects at 75 minutes by public transit, the car trip isn’t much better at 65 minutes on average and can be much worse on some days.

LaGuardia arguably belongs in this category, too. Accounting for a 10-minute wait for a cab, a car trip downtown projects to take 50 minutes (journeys to Midtown Manhattan or to some parts of Brooklyn will be faster). That’s not so much worse than the 65-minute journey downtown by way of the bus.

This is part of why the routing of the proposed AirTrain matters so much. If it winds up shaving only five minutes off travel times to Manhattan — and some analysts are skeptical it will save any time at all — it will be a good backup plan for budget-conscious travelers or when the taxi queue runs to Citi Field, but a car will usually be faster. If the AirTrain knocks 15 minutes off instead, it will be an option worth considering under a much broader range of circumstances.

Take the train. Finally, there’s one airport where the train will often be the best choice — even for expense-account travelers. It’s Chicago’s O’Hare Airport. The “L” train does not run express to downtown Chicago like Heathrow Express does to London, but the Blue Line is a quick and reliable route with frequent service throughout the day — our method projects it will save you 15 minutes on average compared to battling traffic on the Kennedy Expressway.

Clarification (July 27, 10:00 a.m.): An earlier version of this article did not sufficiently attribute a map created by Yonah Freemark and originally published on his blog The Transport Politic.