If you’re like me, your Facebook and Twitter timelines are filled with friends, colleagues and celebrities who suffer from Airport Rage. Ordinarily good-natured, they turn into a cross between Alec Baldwin and Gerard Depardieu when their flight is late.

Sometimes, they have every reason to be upset (like the guy whose dog was lost in transit somewhere between Cuba and Canada). But many other instances of Airport Rage can be prevented with FiveThirtyEight’s fastest-flights interactive. It’ll tell you which airlines are most likely to get you to your destination on time. Over the past year, for example, Virgin America has flown from San Francisco to Los Angeles an average of 28 minutes faster than Southwest Airlines, after accounting for delays and cancellations.

For way more detail about how this works — and why we think our method is better than on-time statistics you’ll see elsewhere — you can check out our previous articles here and here. But the basics are pretty straightforward:

The rest of this article will take a 35,000-foot view of how airlines and airports have performed over the past year, according to the latest government data, which covers most domestic flights from May 2014 through April 2015. We’ll also describe how the numbers have changed since our initial release, which covered January through December 2014. If you want more detail about a particular route — which airline is fastest out of LaGuardia, say, or which one you should fly from Atlanta to Dallas — you can find that at our interactive.

First, some good news. Passengers had a slightly easier time this winter than they did in 2014. By our calculation method, flights were an average of 17 minutes late in January 2015, for example. That’s not great, but it’s much better than the average 35-minute delay they experienced in January 2014. June and July will be a big test for the industry, as passenger volumes increase while stormier weather sets in. 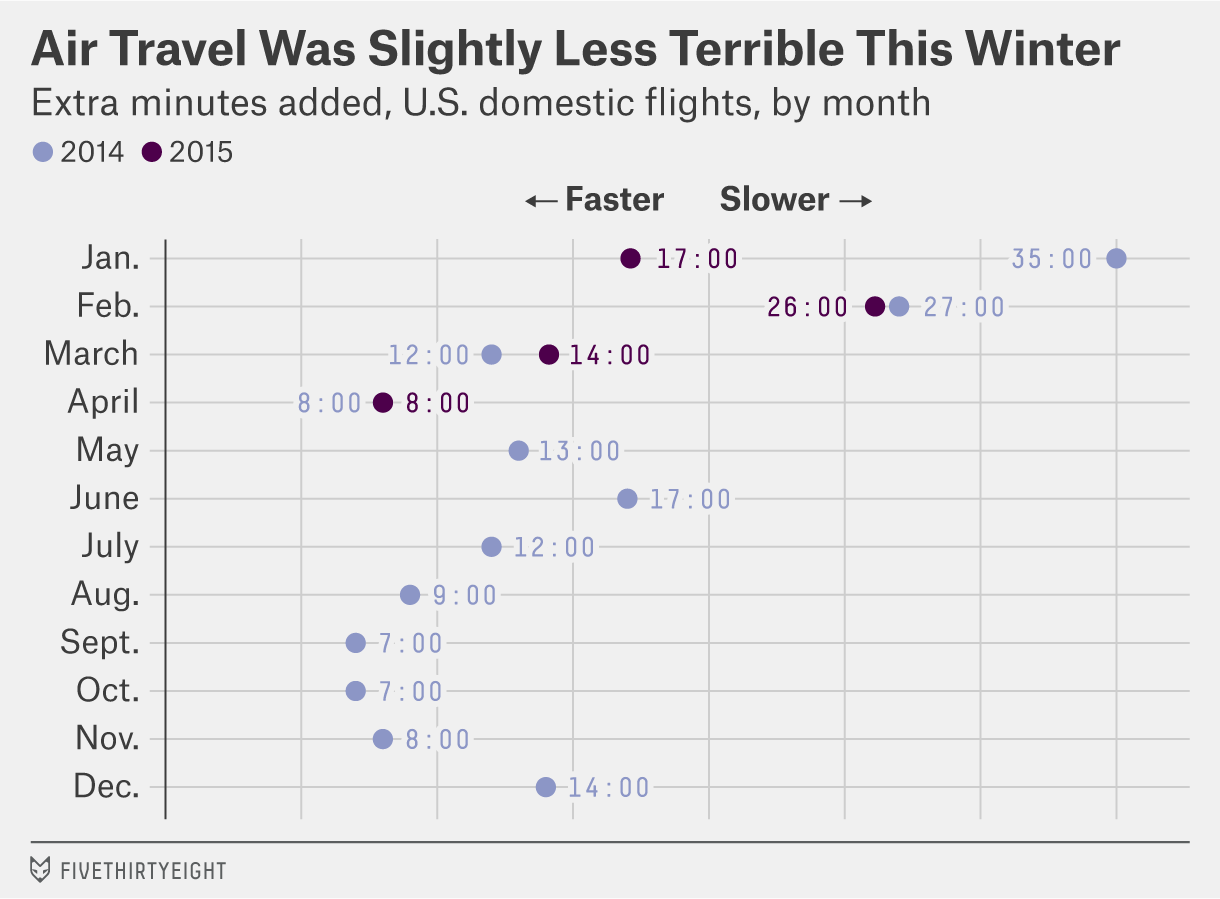 Not all airports have seen improved performance, however. The next chart tracks the delay statistics for the 30 airports that the Federal Aviation Administration classifies as “Large Hubs.” (You can find these numbers for a more comprehensive list of airports, more than 300 of them, in our interactive.) Our method calculates delay statistics for departures and arrivals separately, but we can add them together for a round-trip. 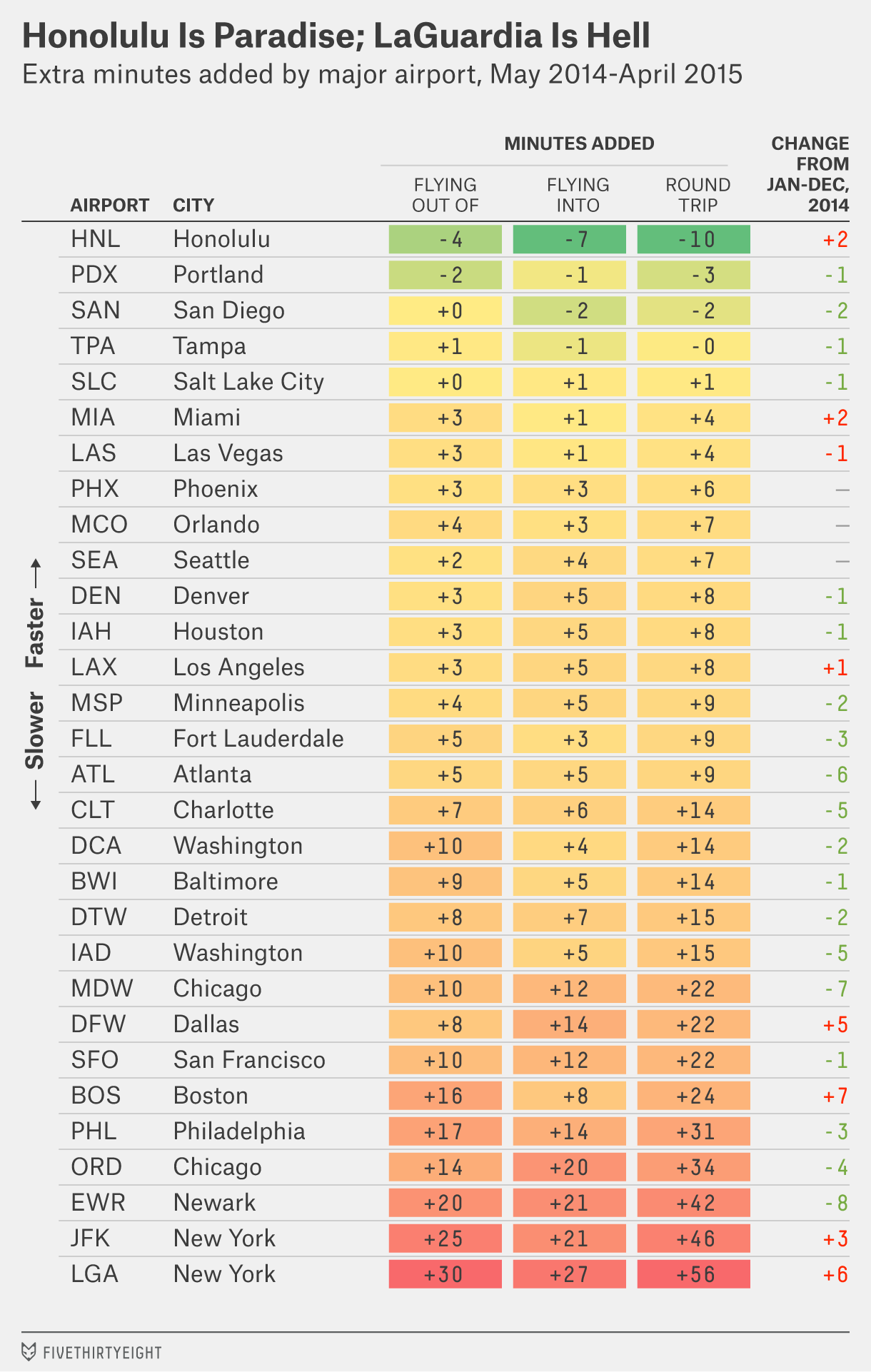 Among major airports, the fastest are Honolulu, Portland (Oregon), San Diego, Tampa and Salt Lake City. The common bond, not surprisingly, is that these airports have relatively good and predictable weather, along with modest air traffic volumes.

The worst airports? The New York metro area wins the Triple Crown of flight delays, with LaGuardia, JFK and Newark ranking as the three slowest major airports, in that order. Chicago O’Hare is the fourth-worst, while Philadelphia is fifth from the bottom. Boston has fallen to sixth-worst, undoubtedly because of its record-setting winter snowfalls.

Frequent fliers in New York and Chicago do at least have a choice of airports. Travel times at Newark have gotten better: round-trip delays were 42 minutes per flight over the past 12 months, improved from 50 minutes in 2014. That’s not good, but it’s better than JFK, where delays have gotten worse and may remain awful through September because of a shuttered runway. (United Airlines, perhaps after looking at data like this, is abandoning JFK for more flights at Newark.) And delays are worse still at LaGuardia, now averaging 56 minutes per round-trip flight.

In Chicago, meanwhile, Midway airport is about 12 minutes faster per round-trip flight than O’Hare.

In many cities, though, travelers don’t have a choice of airports and (considering how many of them are dominated by a single carrier) are lucky enough to have a choice of airlines. So here’s how the 11 major carriers that report their data to the government have performed so far in 2015 and over the past 12 months overall. Keep in mind that these are relative figures, measuring how much time the airlines cost or save you relative to others flying the same routes. 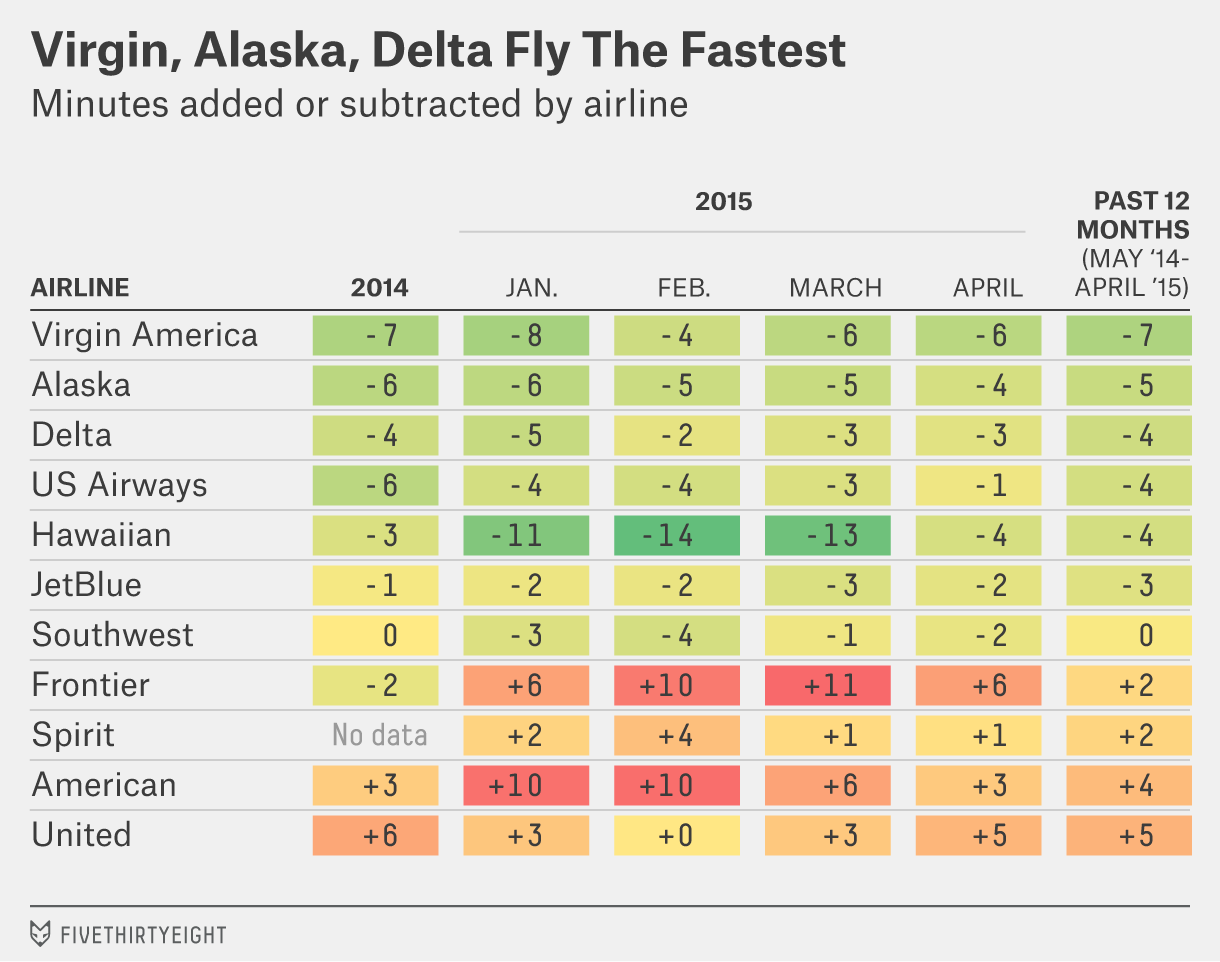 Ranking the airlines from best to worst:

#1. Virgin America, which ranked first in our original analysis, remains in the top slot. It saves you about seven minutes per flight segment, which amounts to almost a half-hour on a round-trip with a connection.

#2. Alaska, along with Delta, has been the most consistent performer in the industry, saving fliers at least four minutes per segment in every month that we’ve tracked. And it’s becoming an option for more travelers by adding capacity, with 10 percent more flights in April 2015 than a year earlier, according to the government’s data.

#4. US Airways is better by our numbers than its middling customer satisfaction numbers might suggest. It may not fly the most glamorous routes, but it’s generally faster than other airlines out of its hubs — Phoenix, Philadelphia and Charlotte — saving about four minutes per segment overall. The bad news: US Airways has fallen to fourth place from second, as its performance over the first four months of 2015 was worse than the same period in 2014. That’s perhaps a bad sign as US Airways is becoming increasingly integrated with delay-prone American Airlines, with which it is merging.

#5. Hawaiian is not quite as amazing as traditional on-time percentages imply. While 90 percent or more of its flights routinely arrive on time by the government’s definition, the same is often true of other carriers when flying to or within Hawaii. But it’s certainly a reliable option, saving travelers about four minutes per segment relative to other airlines on the same routes. In fact, Hawaiian did way better than that in the first three months of this year, saving fliers 13 minutes per segment from January through March. It also performed extremely well in January through March 2014 before regressing to the mean somewhat in the summer, so this may reflect some seasonal advantages from the way it structures its route network.1

#6. JetBlue is another sometimes-maligned airline that comes out looking reasonably good in our analysis. On the surface, it’s delay-prone, with its average flight arriving 18 minutes late.2 But other airlines do even worse on the same routes. JetBlue is about six minutes faster than American on flights originating out of JFK, for example. It has been inconsistent, though. While it had a reasonably good winter in 2015, it was a nightmare to fly in January 2014.

#7. Southwest is at the dividing line between fast and slow airlines, according to our analysis. But it has been showing signs of improvement, with relatively good numbers over the first four months of 2015 after a disappointing 2014. It’s always worth checking on individual routes when you fly Southwest, which relies less than most airlines on a hub-and-spoke network. It rates as the fastest airline out of Nashville, for instance, but the slowest out of San Francisco.

#8. Frontier has seen its performance decline. While it saved fliers two minutes per segment in 2014, it’s cost them eight minutes per flight — worst in the industry — so far in 2015. Frontier still rates pretty well on flights to or from Denver, but it’s usually among the worst performers at the other airports it serves.

#9. Spirit is a new entry, having reported detailed on-time data to the government for the first time in January. So far, it rates as slightly below average, costing travelers two minutes per segment. Like with Southwest and Frontier, its performance varies from airport to airport. It’s slow out of Los Angeles, Denver and Minneapolis, for instance. But it’s faster than most of its competitors on flights from LaGuardia and Dallas, if you’re willing to tolerate the add-on fees.

#10. American has a lot going on, completing a merger with US Airways and turning over much of its fleet. But it may not be smooth skies for fliers in the interim. It’s had the worst start to 2015 after Frontier, costing fliers an average of seven minutes per segment so far this year and leaving it barely ahead of bottom-ranked United over the 12-month average.

#11. United ranks last, as it did in our initial analysis. It has at least been marginally better so far in 2015 than in 2014, costing travelers three minutes per segment instead of six. But when you’re flying more than a million flights a year, it can take some time to change course.