The NHL will expand to Las Vegas pending a $500 million fee for the new franchise, the Associated Press reported Tuesday. In 2015, Nate Silver explained why Las Vegas doesn’t make much sense for the NHL. This post was originally published on April 22, 2015. The original text is below.

There ought to be more NHL teams in Canada, which has only seven of the 30 NHL franchises despite having about as many hockey fans as the United States.

And there perhaps ought to be fewer in midsize American markets, especially those far from the Canadian border. According to my previous research, the six current NHL markets with the fewest number of hockey fans are Nashville, Miami, Raleigh, Columbus, Phoenix and Tampa. Those franchises lost a collective $51 million in 2013-14, according to Forbes.

But here’s another reason to be skeptical about Las Vegas: The city has had several professional sports franchises (albeit none from the four or five largest North American sports leagues), and it hasn’t supported them very well. 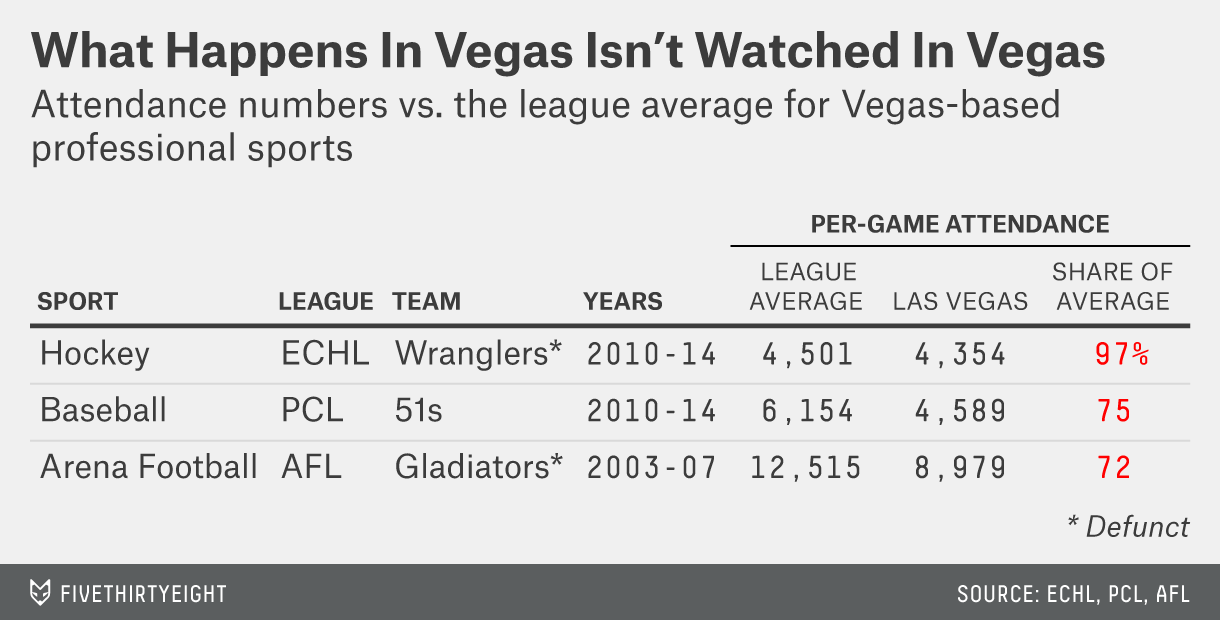 Consider that the city’s Triple-A baseball franchise, the Las Vegas 51s of the Pacific Coast League, had the lowest attendance in the PCL last year.

Or that the city’s professional hockey franchise, the Las Vegas Wranglers of the ECHL, disbanded earlier this year after years of middling attendance and an inability to find a suitable home arena.

The Las Vegas Gladiators of the Arena Football League were relocated to Cleveland in 2007 after five seasons of attendance well below AFL averages. Las Vegas has a new AFL team this season, the Las Vegas Outlaws, but their attendance was poor in their first two games.

You could make an optimist’s case for the NHL in Las Vegas. The number of fans will grow, undoubtedly, if the league places a franchise there. The city gets a lot of tourists (it has about 150,000 hotel rooms), which adds to the functional size of its population.1 And Las Vegas’s population is growing, although the rate of growth has slowed since the housing bust.

But it’s asking a lot for Las Vegas to support a major league team when it’s struggled to support pretty much every minor league team that’s tried to play there. If the city has some positives, it also has some negatives, like irregular working hours, middling public transit and abundant competition for the entertainment dollar, which may depress sports attendance.

To their credit, the backers of the Las Vegas NHL franchise, after a monthslong campaign, have gotten commitments from about 11,000 would-be season ticket holders. That sounds impressive until you consider that the Winnipeg Jets sold out their entire allotment of 13,000 season tickets in 17 minutes after the Atlanta Thrashers were relocated there in 2011. Hockey’s a bit more popular on the frozen tundra than in the middle of the desert.

There is a much better case for an NBA team in Las Vegas. NBA avidity is already well above average there, based on the number of Google searches for NBA-related topics. The NBA, unlike the NHL, has had success in similar markets, like San Antonio and Oklahoma City. And the only sports team that’s consistently been a good draw in Las Vegas is a basketball team: The UNLV Runnin’ Rebels averaged almost 14,000 fans per game from 2009-10 through 2013-14.2