I’m not a morning person, so I appreciate living in New York. The workday here starts later than in any other American city, and about half an hour later than in the U.S. as a whole.

A decade or so ago, when I was a consultant living in Chicago, I didn’t have it so easy. Work in Chicago begins a little earlier than in New York — about 20 minutes earlier, relative to the local time zone. My bosses nevertheless tolerated me rolling into the office at a bit past 9 a.m. But sometimes I’d travel to cities such as St. Louis and Omaha, Neb., to visit clients. Meetings as early as 6 or 7 a.m. were not uncommon; I was “relieved” from one project after a client caught me nodding off in a meeting.

How much do American cities differ in when they begin work? The Census Bureau collects data on this through the American Community Survey. This data isn’t especially user-friendly, but I figured out the median time Americans begin their workday in each metro area. All the figures that I’ll describe here refer to the location of work — not the location of residence for the workers — since some Americans commute between metro areas for their jobs. These figures also don’t include the growing number of Americans who work from home. All times are local.

As I mentioned, New Yorkers get to work late — at least on a relative basis. The median worker in the New York metropolitan area begins her workday at 8:24 a.m. There’s a buffer of about an hour on either side: 25 percent of the workforce has arrived by 7:28 a.m., while 75 percent has gotten in by 9:32.

The 20 most nocturnal metro areas, by the median time of arrival at work, are as follows: 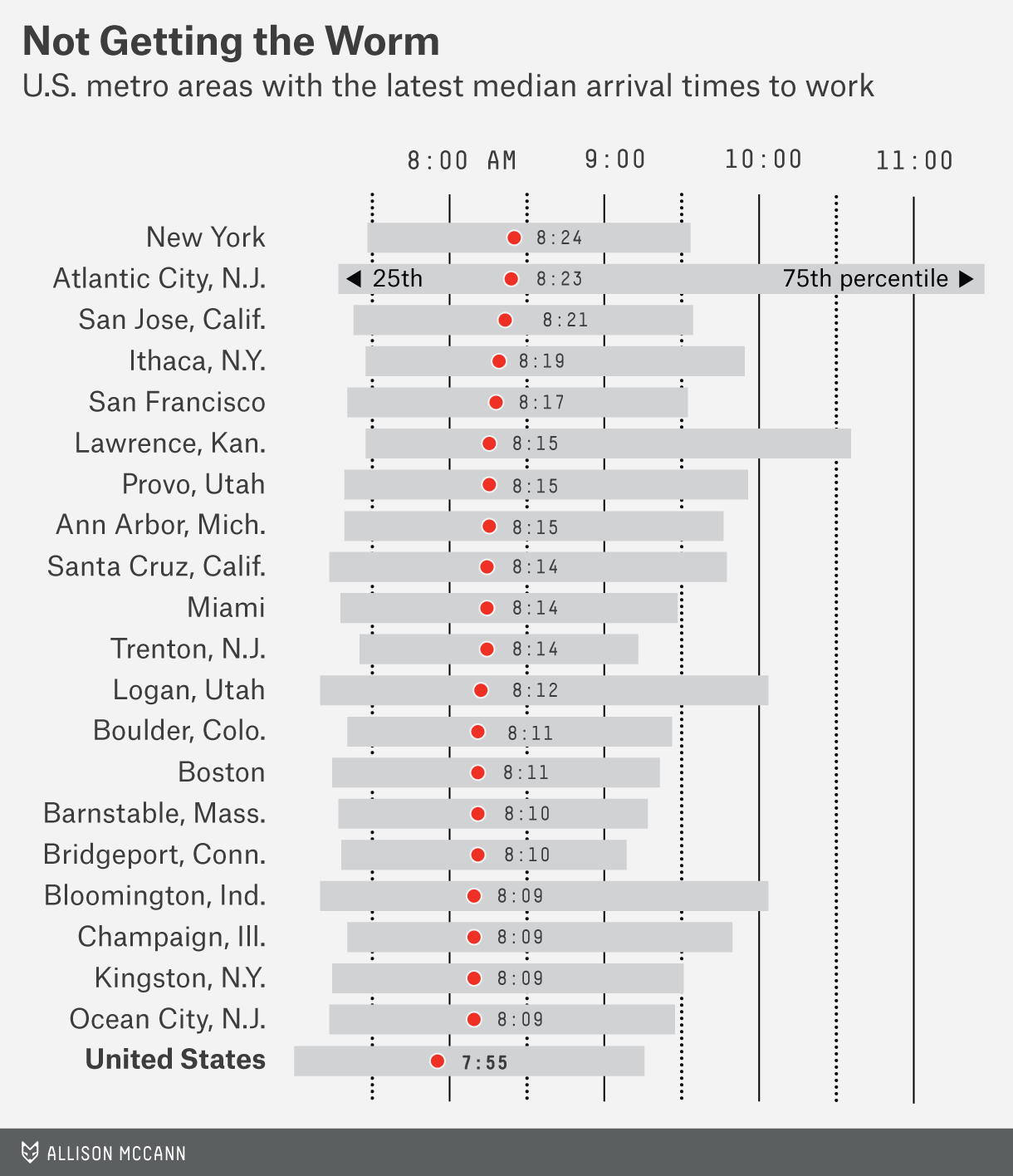 These cities break down into three rough categories. First are those like New York, San Francisco and Boston, which are home to a lot of young, creative professionals. Next are college towns such as Ithaca, N.Y. (Cornell University); Lawrence, Kan. (the University of Kansas); and Logan, Utah (Utah State University). Finally are cities such as Atlantic City, N.J., Orlando, Fla., and Miami, whose economies are associated with recreation, tourism and gambling. A quarter of the workforce in Atlantic City doesn’t begin its workday until 11:26 a.m. or after.

The metro area with the earliest workday is Hinesville, Ga. The median worker there arrives at work at 7:01 a.m. There’s a good chance she is in the military; the Hinesville area includes Fort Stewart and the Army’s 3rd Infantry Division. Military metros account for a number of the earliest-to-work communities, including Killeen, Texas (Fort Hood), and Jacksonville, N.C. (Camp Lejeune). Many of the other early-arriving metros, such as Bakersfield, Calif., rely on farming and agriculture to generate income. 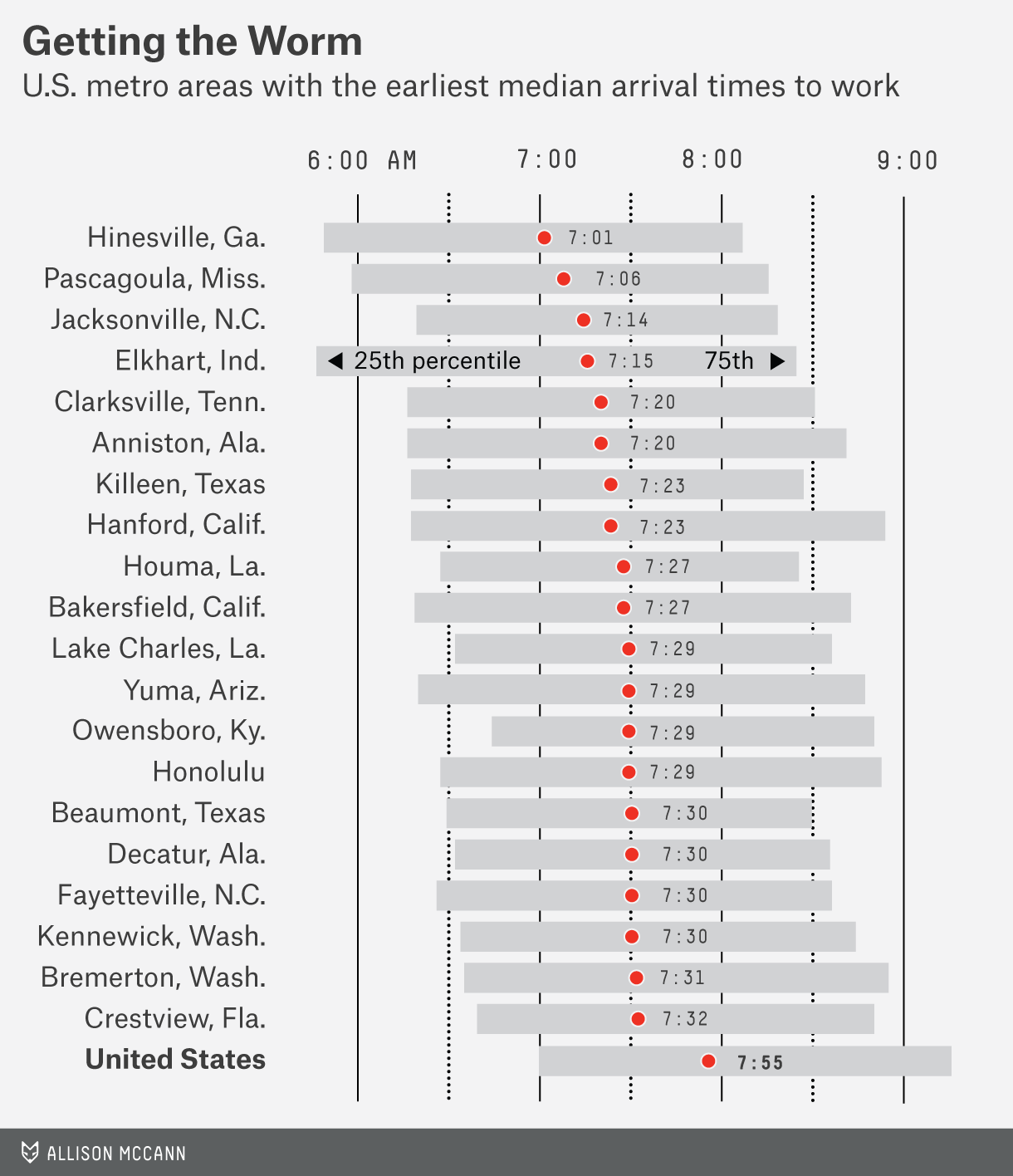 One exception is Honolulu, where the median workday begins at 7:29 a.m. Presumably, some workers there are trying coordinate with the U.S. mainland. This is not true of Anchorage, Alaska, however, where the median workday starts at 7:57, two minutes after the U.S. median of 7:55. While Anchorage is four hours behind the East Coast, its northerly location presents another constraint for some workers: sunrise there doesn’t occur until after 8 a.m. for five months out of the year.

What about those mid-size Midwestern metros, such as St. Louis? Work in St. Louis indeed begins begins relatively early, at 7:50. In Omaha, the median workday starts at 7:48. Kansas City, Mo. (7:51), Milwaukee (7:51) — also places on my consulting itinerary — likewise start their workday just slightly earlier than the U.S. median.

But the majority of highly populous metro areas begin working a little later than the rest of the country. (The chart below depicts the schedule for the 35 metro areas with the largest number of workers.) Washington, D.C., starts work at a median time of 8:07 (although it is prompt: three-quarters of the workforce is in by 9:14). The median worker in Los Angeles begins at 8:05; in Atlanta, at 8:03; in Chicago, at 8:02.

In general, however, the workday schedule is dictated more by the type of work than the location. The earliest-arriving quartile of the workforce in the New York metro has begun work by 7:28 a.m. — quite a bit sooner than the the latest-arriving quartile in Hinesville, which starts work at 8:06. Some of us New Yorkers appreciate our extra half-hour of sleep. But if you’re an early bird or a night owl and want a work schedule that matches your metabolism, changing jobs is a better strategy than changing cities.