After decades of planning, the Washington Metro’s Silver Line finally opened last week. The line aims to make inroads in a car-centric swath of Northern Virginia, but D.C. itself is already known for its robust public transit. How robust?

Very. To receive grants from the Federal Transit Administration, transit systems of all types (heavy rail, light rail, buses, etc.) must provide monthly ridership data to the National Transit Database (NTD, data available to download here), which compiles it by census-designated urbanized areas. The measure used is “unlinked trips,” which counts transfers during the same journey as separate trips. This figure can be converted to “trips per resident” by dividing unlinked trips in 2013 by 2012 population estimates from the American Community Survey (ACS), yielding a figure that’s neatly comparable among cities of varying sizes.

By this metric, Washington had the third most-used transit system in the U.S. in 2013, narrowly edging out Athens, Georgia (home to University of Georgia), and Boston. With 99.6 trips per resident, Washington still trailed San Francisco (131.5 trips per resident) by a significant margin. And both were dwarfed by New York (229.8), which is operating on a completely different scale.

The chart below shows how New York’s unlinked in trips in 2013 compared with the next 16 biggest transit systems: 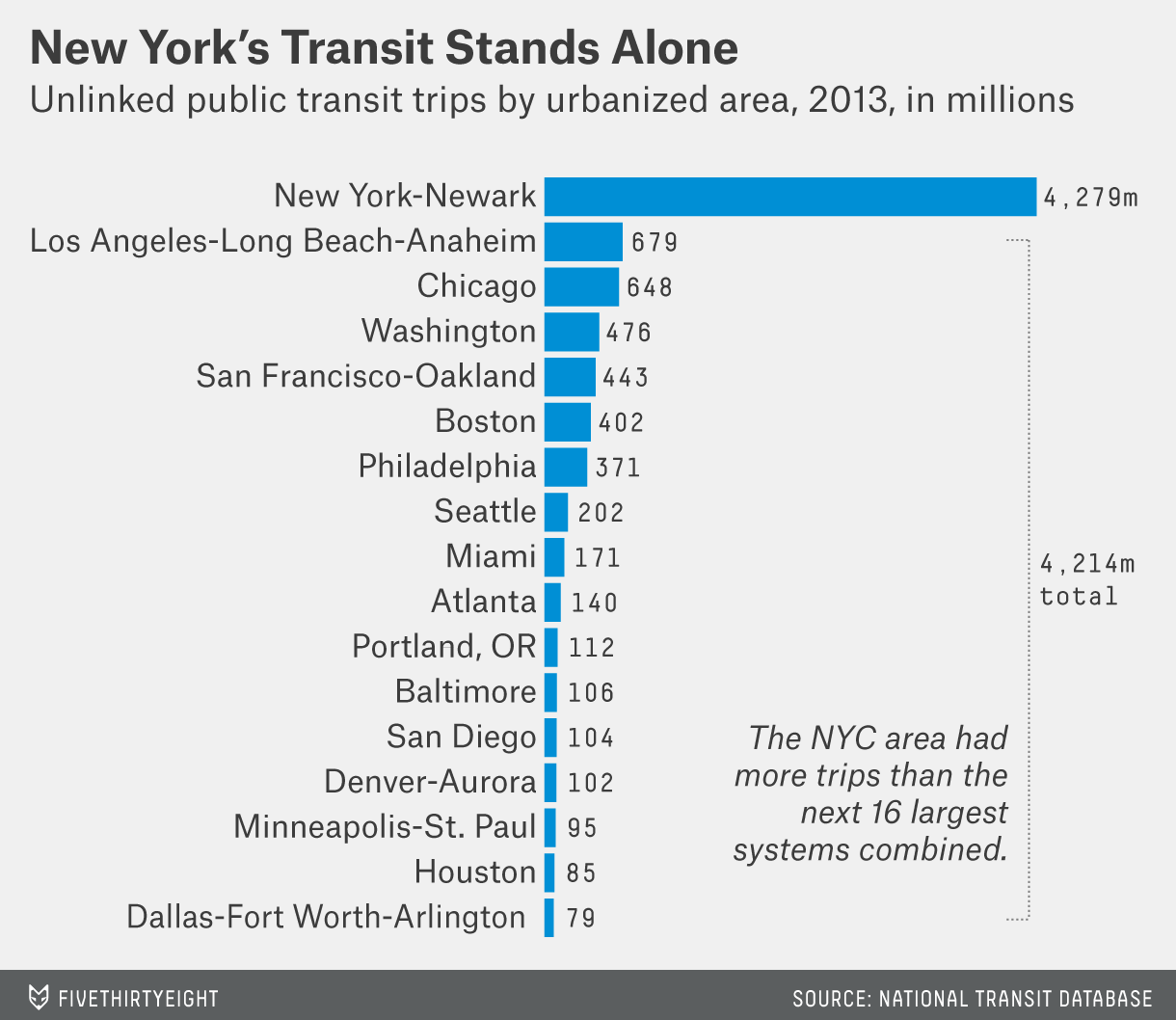 It’s clear why New York is the only U.S. system to register on the international level. Most of New York’s trips were on the MTA subway (62 percent), followed by MTA buses (21 percent), NJ Transit buses (4 percent) and LIRR commuter trains (3 percent).

New York, Washington, Boston and Philadelphia — the urban centers of the “Northeast Corridor” — all fall into the top 10 in trips per resident. They also fall into the top 10 of urban population. Do certain regions tend to support better public transit, or is this just a product of city size and density?

The maps below show the distribution of this “small city” subset, including small cities that did not report to the NTD. Bubble area is proportional to population. 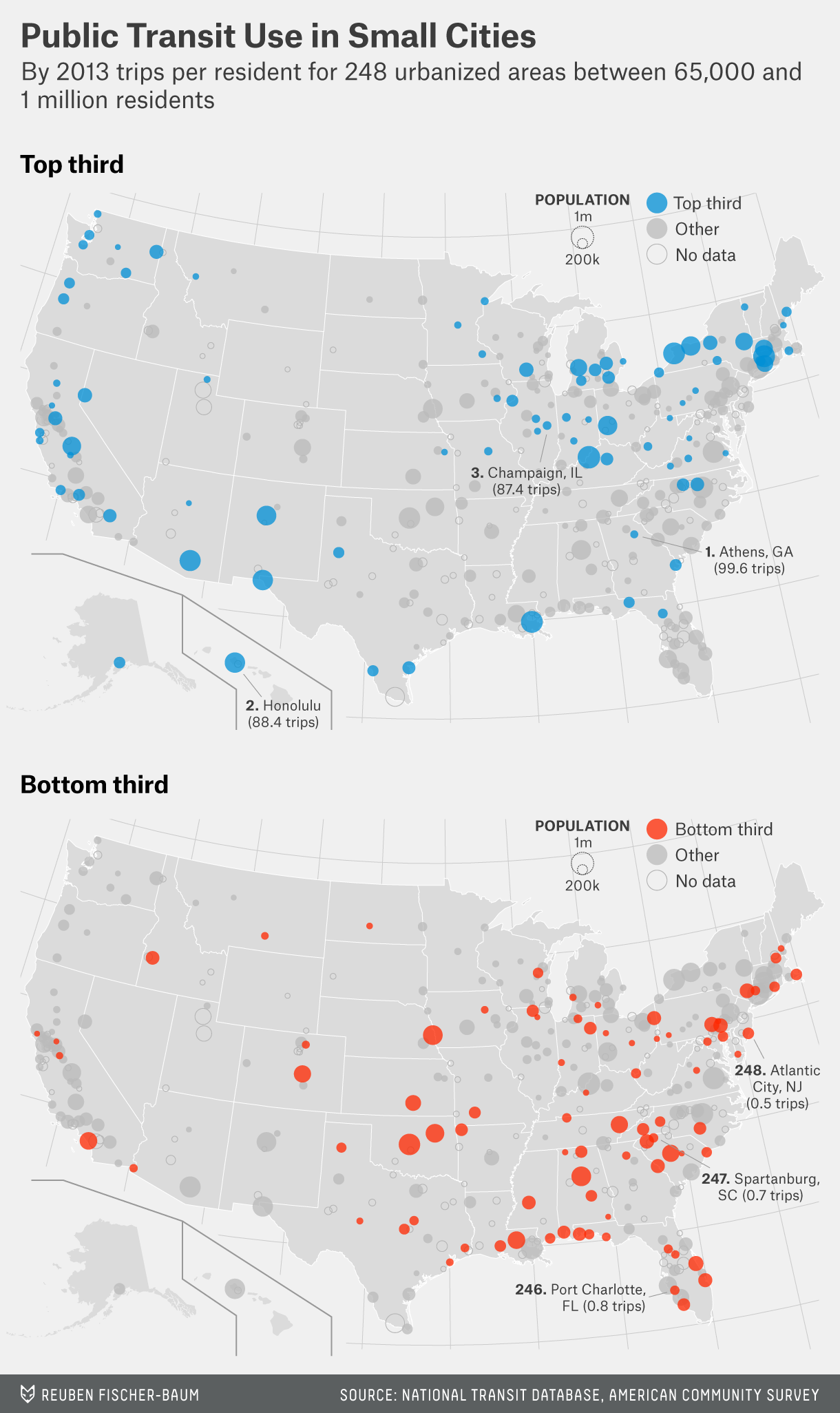 There’s a pretty clear geographic trend here. The top transit systems are clustered in the Northeast and West. The South, including Texas and Oklahoma, has some of the worst systems, and the Midwest is mixed. Many small cities are missing from the NTD data set, but it’s a fair assumption that non-reporting cities generally don’t have top-flight transit systems (although Utah has some excellent systems that didn’t provide full 2013 reporting). These cities are disproportionately in the South.

The 42 cities with over 1 million residents show a similar geographic trend: 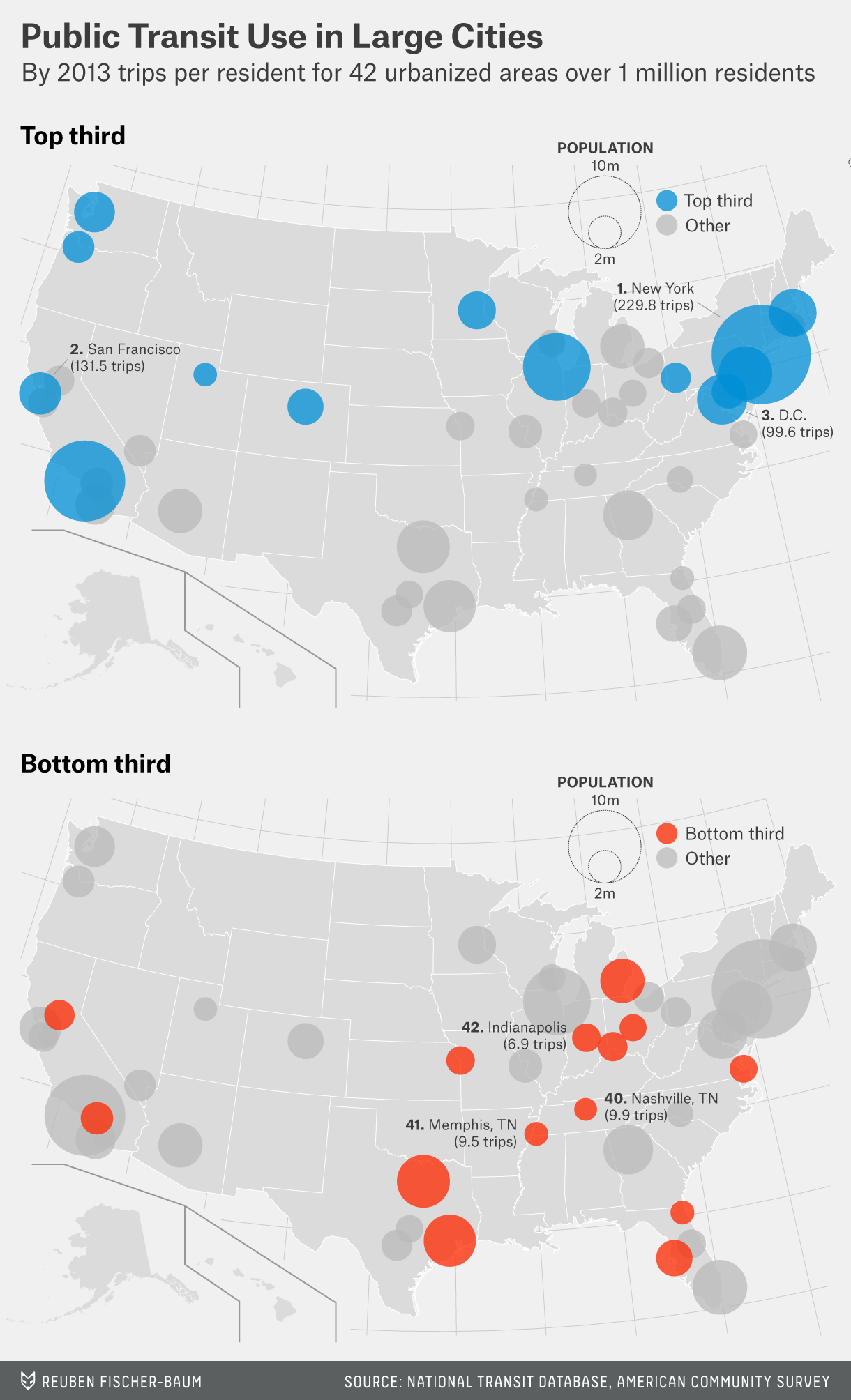 Indianapolis, Memphis, Tenn., and Nashville, Tenn., combined for just 30.7 million unlinked trips in 2013. By the end of 2025, the Washington Metro projects that the Silver Line will handle 115,000 trips per day, or 42 million a year. Some cities have some catching up to do.

Thanks to Professor Sarah Kaufman at New York University for her clarifications about the NTD dataset.