At a major international tournament, American men had a very bad day.

Yes, the U.S. men’s soccer team did just fine Thursday, losing 0-1 to Germany but advancing to the knockout stage of the World Cup. But at Wimbledon, all but one of the four remaining American men exited the singles draw without winning a set. That leaves just John Isner to play in the third round. Isner is by far the highest-ranked American, but he’s often vulnerable to upsets at events outside the U.S.

Here’s a sign of how bad things have gotten for American men’s singles tennis: Even with all the early exits, Isner has to win just one more match for this tournament to count as a good Grand Slam by recent low standards. He’d be the lone American man in the fourth round for a second consecutive major, after five consecutive Grand Slams without any American man to make it to the Round of 16. The U.S. hasn’t had a male quarterfinalist at a Grand Slam since Isner and Andy Roddick reached that stage at the 2011 U.S. Open, nor a semifinalist in the five years since Roddick lost in the final at Wimbledon. No American man has won a major since Roddick did at the U.S. Open in 2003, and after every disappointing Grand Slam, the prospect of an American major champ seems farther away than it did at the one before.

The situation is very different for the American women. They’re led by world No. 1 and five-time Wimbledon champ Serena Williams, who will be joined in the third round this year by her sister, Venus Williams, who also has won Wimbledon five times. Even more American women are outperforming their male counterparts. Three others have made the third round at Wimbledon, with one more, Victoria Duval — the 18-year-old who got into the tournament the hard way, by qualifying — still to play her second-round match.

Sixteen countries have a No. 2 player ranked higher than the second-best American, No. 67 Sam Querrey, one of the players who lost on Thursday. Among the countries with a higher-ranked No. 2 player are Switzerland, Croatia and Austria, which have a combined population under 21 million — roughly the population of Texas. Three other countries with a population under 20 million have a No. 2 player ranked higher than Querrey. (It’s worth noting that tennis has become more popular globally since the 1980s, hence more countries are competing and leaving fewer spots for the traditional powers.) The strength of the No. 2 player matters, as a proxy for depth of talent and for the Davis Cup, the international team competitions with two singles slots.

To Denis Kudla, a 21-year-old American who lost his second-round match here Thursday, international comparisons aren’t fair because of tennis’s relatively slight stature among U.S. sports. “Tennis is our fifth or sixth sport,” he said in an interview last week. “People just have to be patient.”

American women fare better in the equivalent international comparison, perhaps partly because female athletes have fewer professional options and tennis is one of the most lucrative. Just two countries have higher-ranked No. 2 players than Sloane Stephens of the U.S.: Serbia and Italy.

Strong prior American male generations — John McEnroe and Jimmy Connors; Andre Agassi and Pete Sampras — cast a long shadow over Roddick and his peers, former top-10 members James Blake and Mardy Fish. But the Roddick generation was far stronger than the current one, as demonstrated by the decline in the number of American players in the majors’ draws, of seeded American players and of American players who reach the third round. 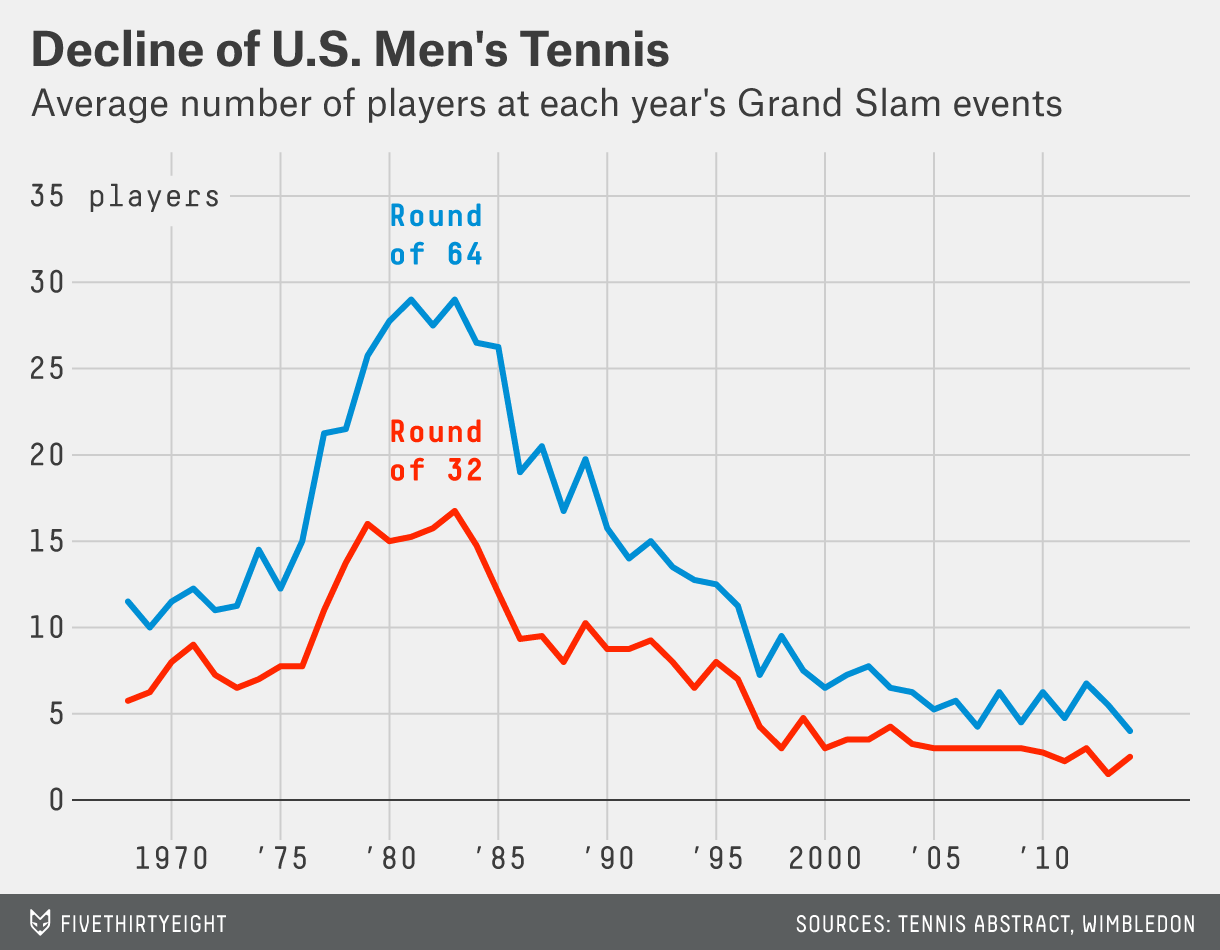 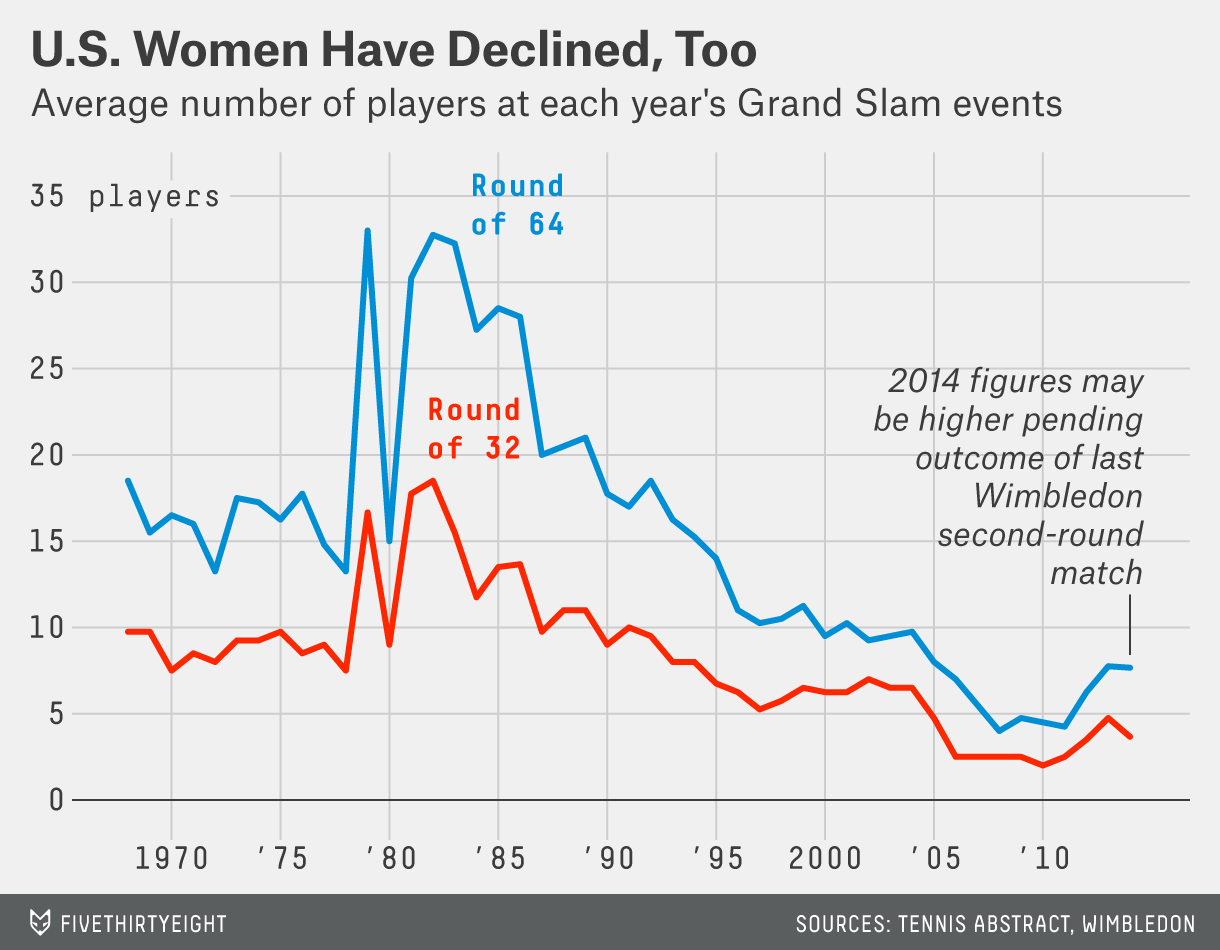 “I think what happened is, maybe we missed a generation,” Kudla said. “The generation behind Roddick maybe didn’t pan out like it was supposed to.”

“Every country goes through a slump,” Benjamin Becker, a German player who played for Baylor University, said in an interview this week. “It’s not easy to always have these prodigies like Agassi, Sampras, McEnroe, [Jim] Courier and Connors. A lot of times, countries take generations off.” He added, “I’m very confident that an American player will be soon at the top level.”

Two young Americans who hope to fulfill Becker’s prediction had modest success last week, qualifying for Wimbledon by winning matches on adjacent courts at the Bank of England Sports Centre while monitoring each other’s progress. Ryan Harrison, who was watching Kudla’s match during changeovers of his own contest, said in an interview that in an individual sport, national rankings don’t matter much. “The U.S. is always concerned about how many top players they have,” Harrison said. “The only thing I’m concerned about is my own development, my own career.”

He added: “The U.S. has to really understand that we’re working. We’re doing what we can here.”