Jimmy Wang doesn’t have Roger Federer’s seven Wimbledon titles; Wang doesn’t even have five wins in the Wimbledon main draw. But the Taiwanese tennis player has accomplished something Federer won’t ever touch: Five times over the past decade, Wang has qualified for Wimbledon.

The four Grand Slam tournaments are the tentpoles of the tennis calendar, the times when casual fans notice the sport and its stars. Before each Grand Slam, there is another tournament, giving players whose ranking isn’t high enough to make it directly into the draw another way in. They play before tens or hundreds of spectators who usually get in free, not thousands of paying fans. Wimbledon’s qualifying tournament isn’t even at Wimbledon; it’s at the Bank of England Sports Centre in Roehampton, another southwest London neighborhood 3 miles away.

Most young players see qualifiers as a necessary but not fun rite of passage until they rise in the rankings and don’t need to get in the hard way. But some players, like Wang, find that injuries or other setbacks keep them on the sport’s periphery for most or all of their careers. Few keep coming back to qualifying tournaments for a decade. Still fewer are as successful as Wang at this second tier of Grand Slam tennis. They are the statistical outliers, the best strivers in major tennis. And they don’t all love the distinction.

“This year, it feels great” to qualify, said Gilles Muller, a 31-year-old from Luxembourg, in an interview last week at Roehampton after qualifying for Wimbeldon, the fifth Grand Slam of his career, more than 10 years after the first time. Muller had to go through qualifying because he missed the last seven months of last year with an elbow injury, and his ranking slipped. “I hope it will be my last qualies,” he said.

Repeatedly qualifying for Grand Slam tournaments, as Wang and a handful of others have done, is so rare because players who are good enough to qualify typically either don’t have to or are too good to have to keep doing it. Federer never qualified for a Grand Slam tournament. Neither did Rafael Nadal. Andy Murray did, once, and Novak Djokovic did three times. They last qualified in 2005, soon after each turned 18.

Grand Slam qualifiers have to win three matches in a 128-player draw. The 16 who do usually are the ones whose rankings — based on the last 52 weeks of play — understate how good they are, perhaps because they missed time to injury or are too young to have played many events. Generally, their rankings will catch up with their level and they won’t need to qualify anymore.

When it doesn’t, injury often is the reason. Wang had two surgeries after suffering an injury to his right wrist in 2006. He ended up missing three years at an age when most of his peers were climbing the rankings. “I almost stopped,” Wang said in an interview last week. “I realized life is short.”

At age 29, he’s back to a level good enough to qualify, as he’s done for the past three years at Wimbledon. Wang has qualified for majors seven times overall, tied for 10th in the Open era, according to data provided by Jeff Sackmann of Tennis Abstract.

After Wang’s win, well-wishers posed with him for dozens of photos — many of them next to the scoreboard, many selfies. One woman had been watching Wang try to qualify for Wimbledon since his very first successful attempt, in 2004. Wang said he was “very excited.” He had no idea this was No. 7 for him, but sees no shame in it. “One thousand players try to get into the top 100,” Wang said of pro tennis. “They have the same goal. They have the same dream.”

Denis Kudla, one of the thousand, qualified later on Thursday, the fifth time he’d done so at a major. He is just 21 years old. “I’m proud of that,” Kudla said — it meant he’d earned his place. (He went on to win his first-round match at Wimbledon on Tuesday against Marsel Ilhan.)

Kudla’s fellow American, Ryan Harrison, qualified with a win on the adjacent court. Harrison was proud, too. He said he enjoyed the “fantastic” feeling of qualifying and going into a tournament on a three-match winning streak. However, he added, “I’m very determined for this to be my last qualifying.” Three years ago, he got his ranking high enough to enter Grand Slams directly. Since then, his ranking has slipped. “To say I can’t do it at 22, when I did it at 19, is kind of crazy,” he said.

Harrison admires players like Wang but sets himself apart from them. “You have a ton of respect for those guys. I’ve always believed success is relative to your God-given ability,” Harrison said. On the other hand, he added, “I’ve always had a ton of belief in my ability.” (Harrison lost in the first round at Wimbledon on Monday, after getting his usual tough draw.)

He has a point about the top of the qualifying leaderboard. None of the nine Open-era players who qualified for more majors than Wang ever reached the top 25 in the rankings or played in a Grand Slam semifinal. 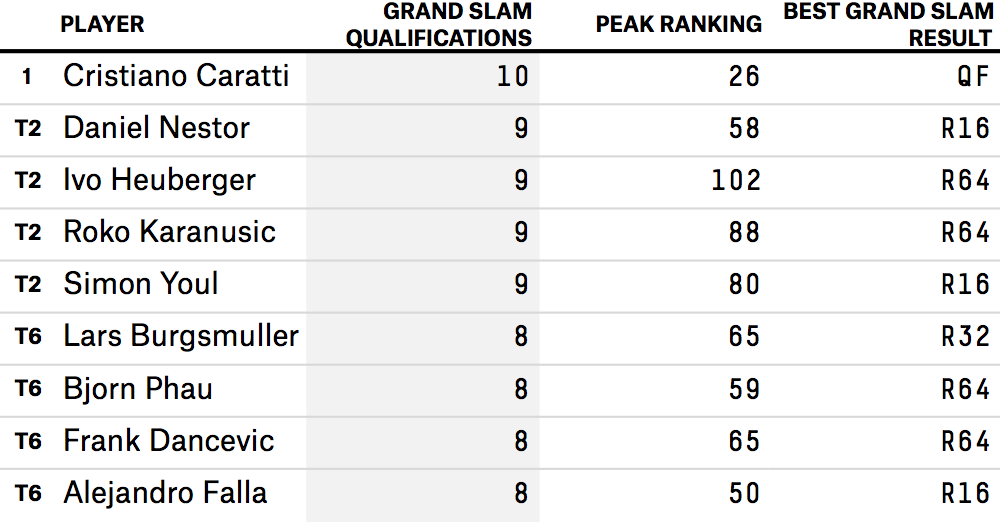 If Wang doesn’t ever qualify for a Grand Slam again, he’ll hope it’s because he got his ranking into the top 100 and didn’t need to. He took the first step Monday: The five-time co-champion of Wimbledon’s annual pre-tournament tournament won just his fourth career main-draw match, 6-3, 6-3, 6-2 over Alejandro Gonzalez.