The job market slowed down sharply in March. The question is whether it was a temporary blip or a sign of deeper trouble.

Employers added 126,000 jobs last month, breaking a 12-month streak of growth over 200,000 jobs, the Bureau of Labor Statistics said Friday. The report was far weaker than most economists expected and represented the slowest pace of growth since the end of 2013. The government also revised down its estimate of January and February hiring by a combined 69,000 jobs.

It’s important to keep those figures in perspective. The economy has added more than 3 million jobs in the past year, a healthy rate by any measure. The month-to-month numbers are volatile and subject to revision; it’s never a good idea to read too much into any one report.

Still, Friday’s report is worrisome because it comes at a time when other economic indicators have looked shaky or even downright negative. Overall economic growth slowed down at the end of 2014, and consumer spending, foreign trade and construction spending have all started 2015 on a weak note. Earlier this week, a key reading of the manufacturing sector fell for the fifth month in a row. March’s disappointing job growth is sure to fuel fears that the recovery is losing steam.

Podcast Quick Hit: Today’s Jobs Report and How It Will Get Spun


Are those fears justified? The details of the jobs report send mixed signals. The unemployment rate was flat, but the labor force shrank. Hourly earnings rose, but the average workweek fell. Employment fell in some key industries, but rose in others.

The bottom line: It’s too soon to conclude that the job-market recovery has slowed down. But it isn’t too soon to start getting nervous.

Here are a few other observations from Friday’s report:

Wage growth still stuck: Average earnings rose 7 cents an hour in March, the biggest jump since November. But don’t get excited. Monthly earnings are highly volatile. It makes much more sense to focus on the change over a full year, which shows that the recent pattern of sluggish wage growth remains firmly in place despite high-profile announcements of raises from companies like Wal-Mart and McDonald’s. Moreover, employers cut the average number of hours their workers were on the job, which meant that weekly earnings actually fell. 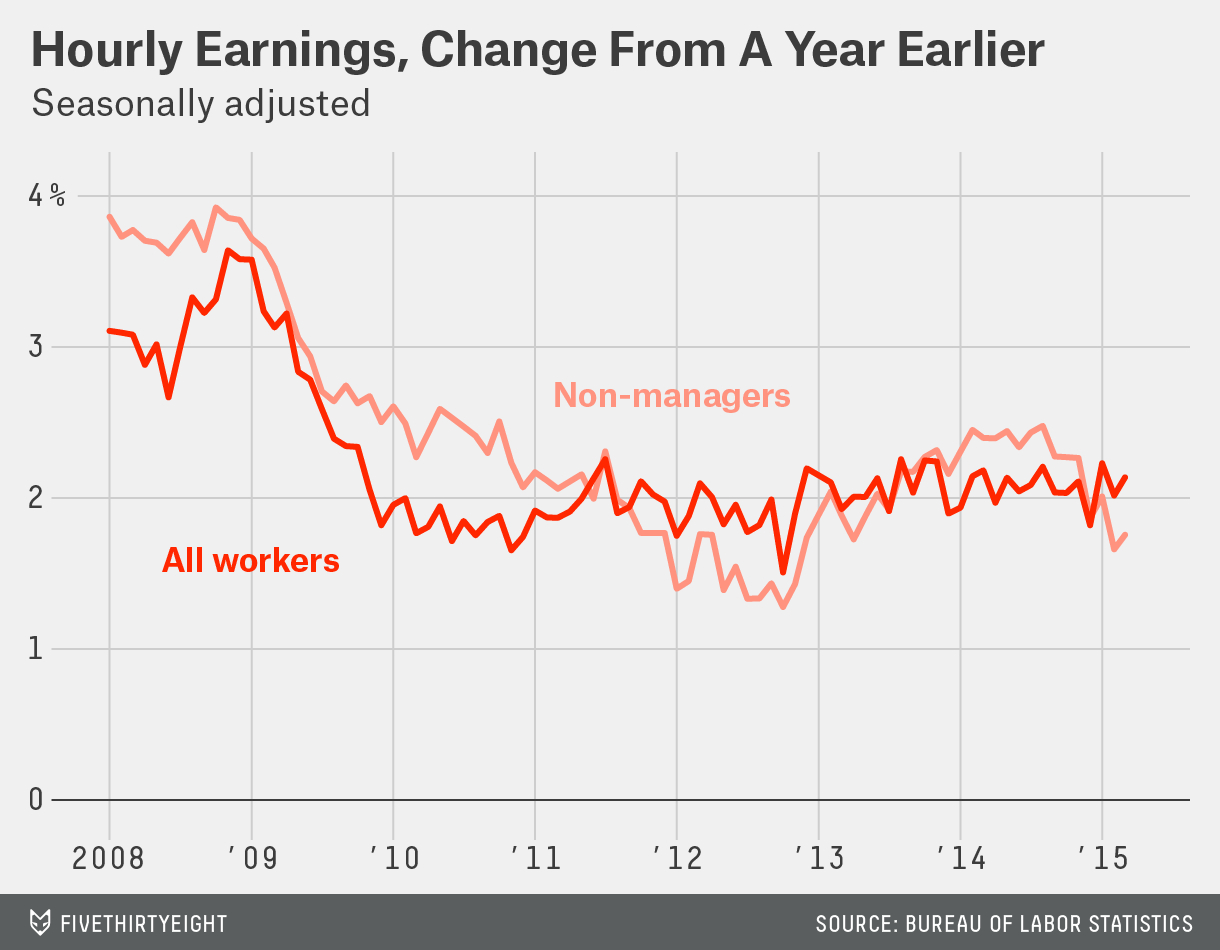 Low prices hit the oil industry: Employment in the oil industry grew rapidly during the fracking boom. Now low oil prices are starting to take their toll. The mining sector, which is dominated by the oil industry, cut 11,000 jobs in March, the second straight month of falling employment. Some manufacturing sectors that serve the oil industry have also been cutting jobs. Meanwhile North Dakota, home to the Bakken Shale, recently gave up its claim to the nation’s lowest unemployment rate.

Overall, the mix of job growth looked a bit less positive in March, although not strongly enough to draw firm conclusions. Many of the jobs came in the retail and temporary help sectors, while better-paying sectors like construction and manufacturing showed slight declines. But all of March’s gains came in full-time employment, a pattern that has been consistent throughout the recovery. 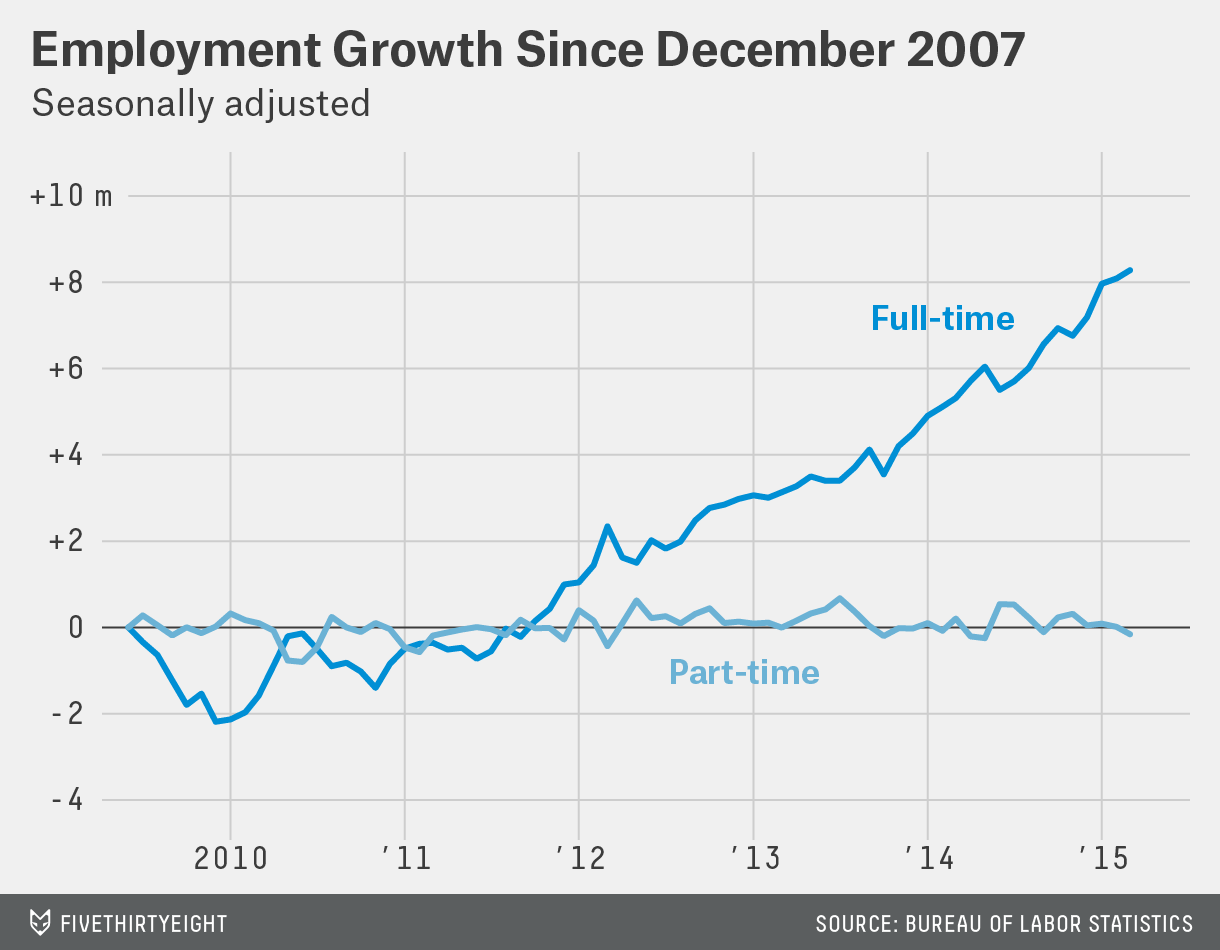 “Underemployment” falls: The unemployment rate held steady at 5.5 percent in March, but a broader measure of underemployment fell below 11 percent for the first time since the recession ended. That measure includes people who have stopped looking for work because they don’t think they can find it and people who are working part time because they can’t find full-time work. Despite March’s improvement, however, it remains elevated — a sign the economy isn’t as strong as the unemployment rate alone suggests. 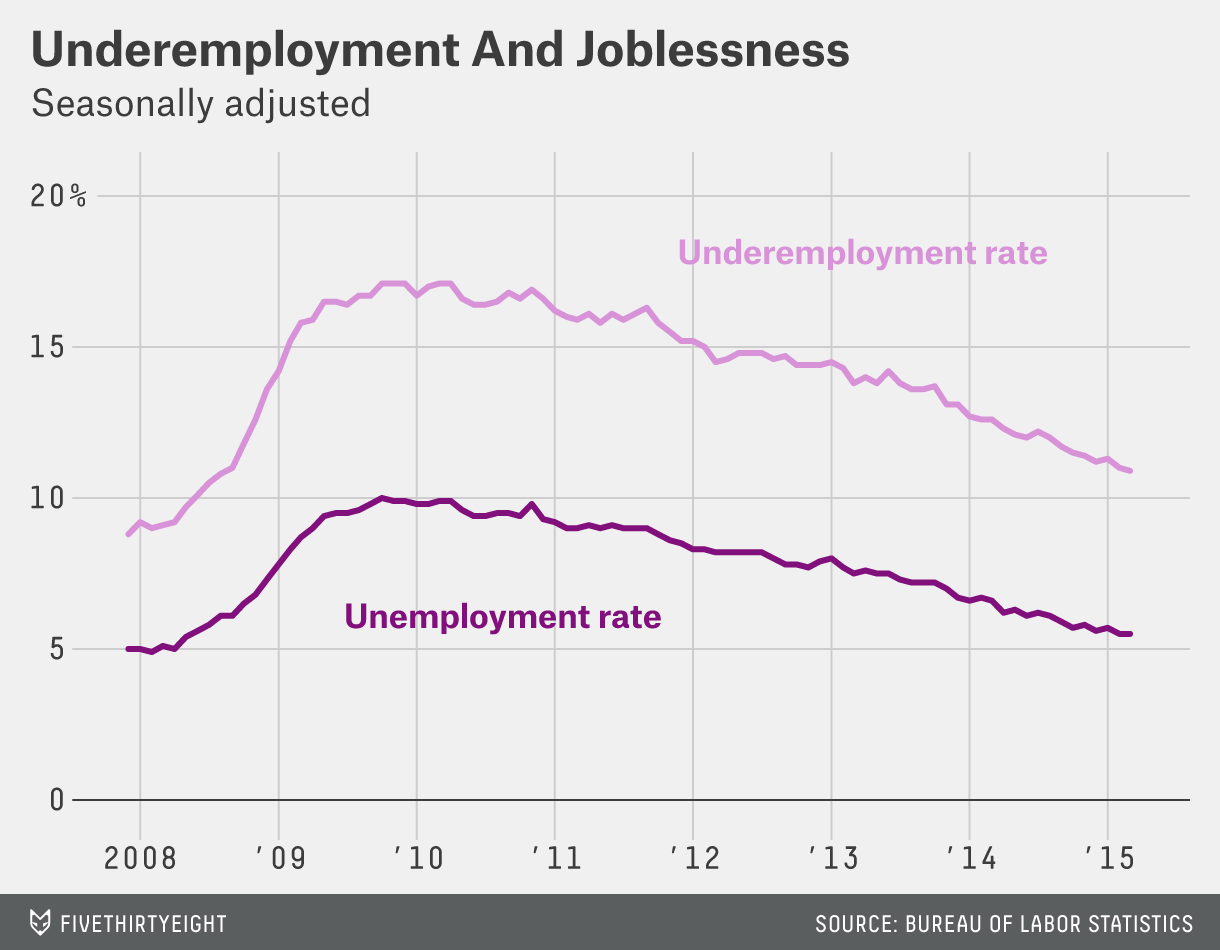 As for the unemployed, 2 million of them successfully found jobs in March. But even more stopped looking for work altogether. More than 2.5 million Americans have been out of work for more than six months, the usual definition of long-term unemployment. 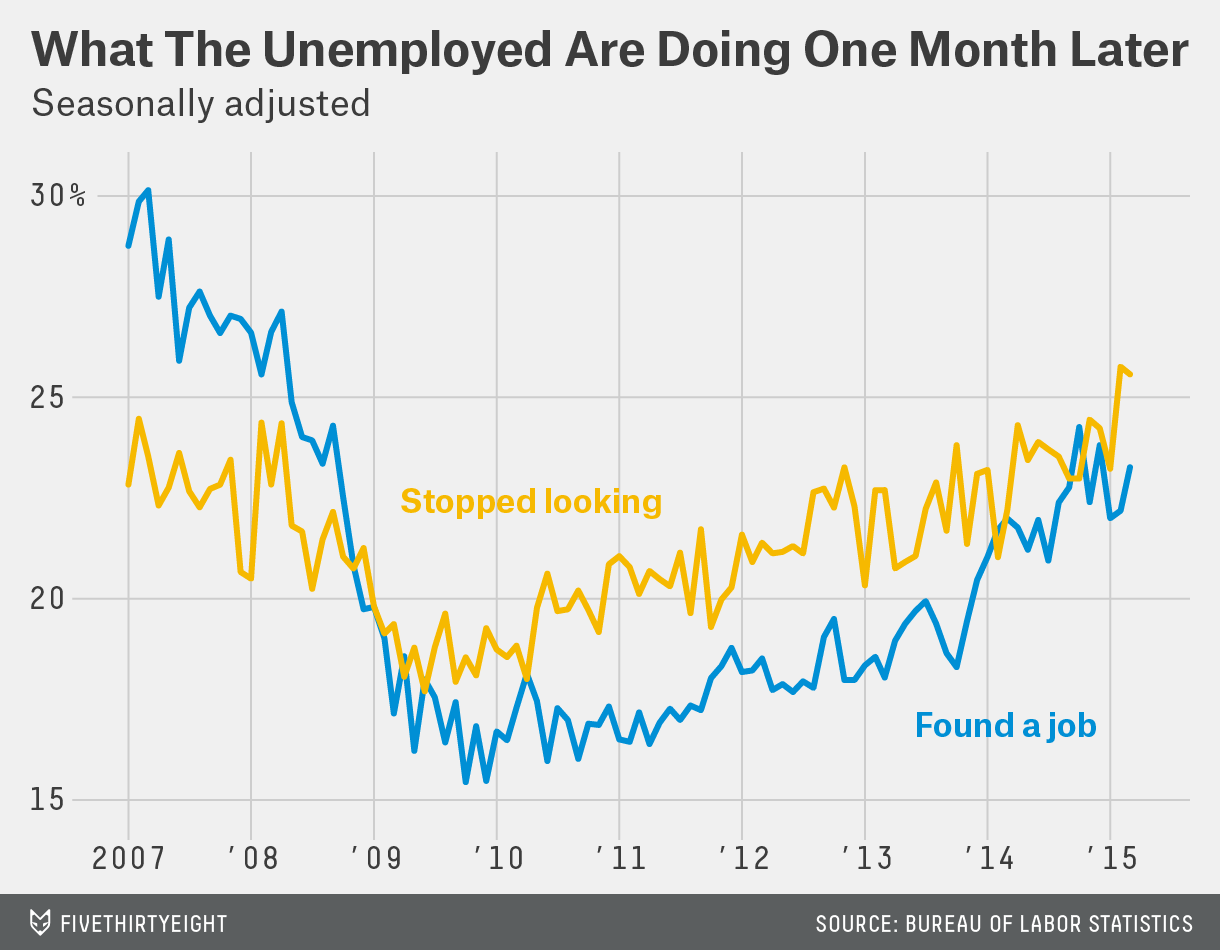 The bigger picture remains the same: As a share of the population, the labor force is the smallest it’s been in decades. That’s due in significant part to the retirement of the baby-boom generation, but it likely also reflects the ongoing effects of the recession. And so far, there’s no sign that the recovery is drawing many Americans off the sidelines. 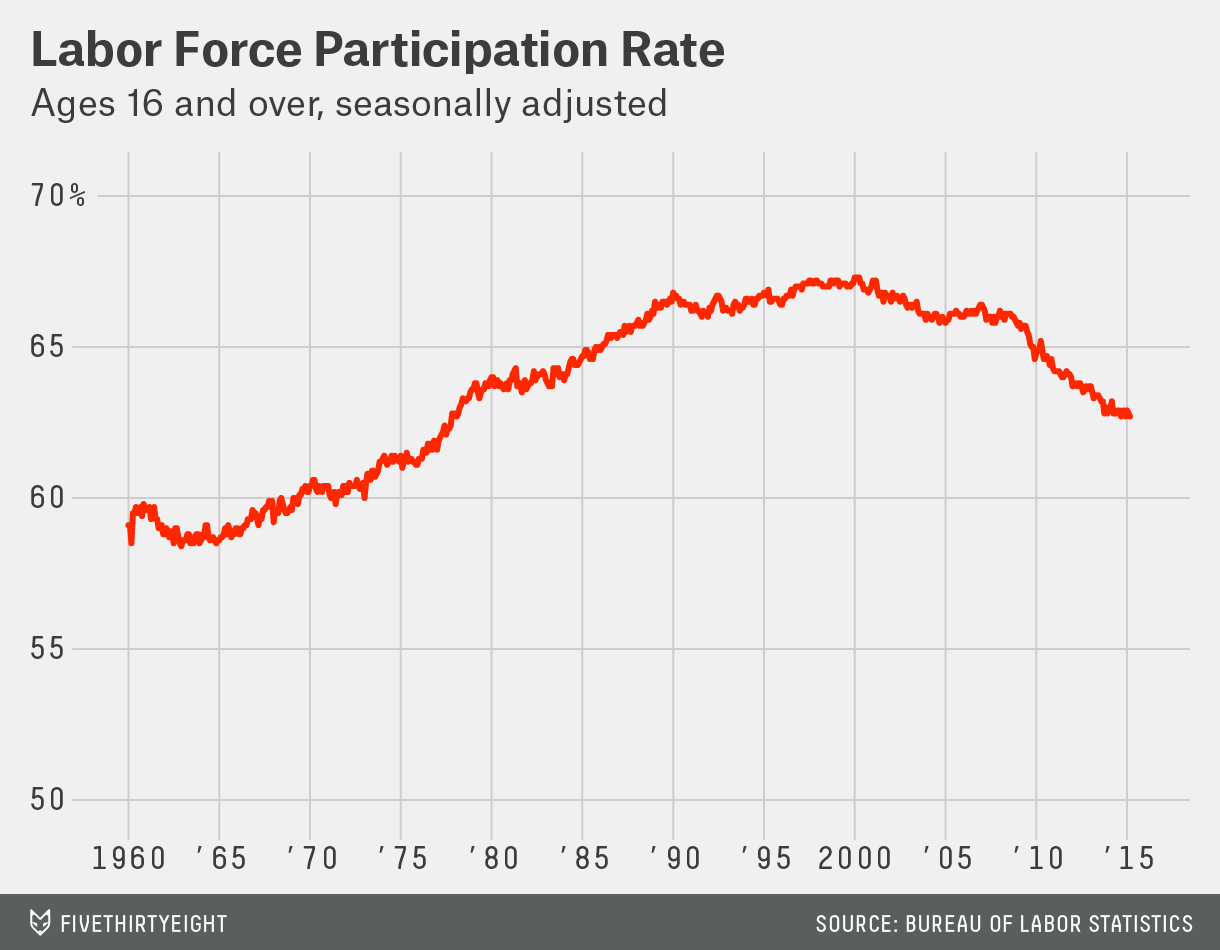