Most of the time you’re better off ignoring these early polls. Some of this is on general principle: A lot can and will change between now and next November.

But there’s also a particular reason for Democrats not to get giddy about Bush’s polling: He’s a long way from winning the Republican nomination. In fact, his poor favorability ratings are in substantial part the result of his tepid support among fellow Republicans. Either Bush will become more popular among Republicans — or they won’t pick him. So citing his current favorability numbers as a general election weakness doesn’t make a lot of sense.

In the graphic below, I’ve listed current favorability ratings for Clinton, Bush and some other candidates (real and potential), broken out by party.2 As you can see, there’s very little support across party lines. Clinton and Joe Biden get terrible ratings among Republicans. None of the Republican candidates get much support among Democrats. 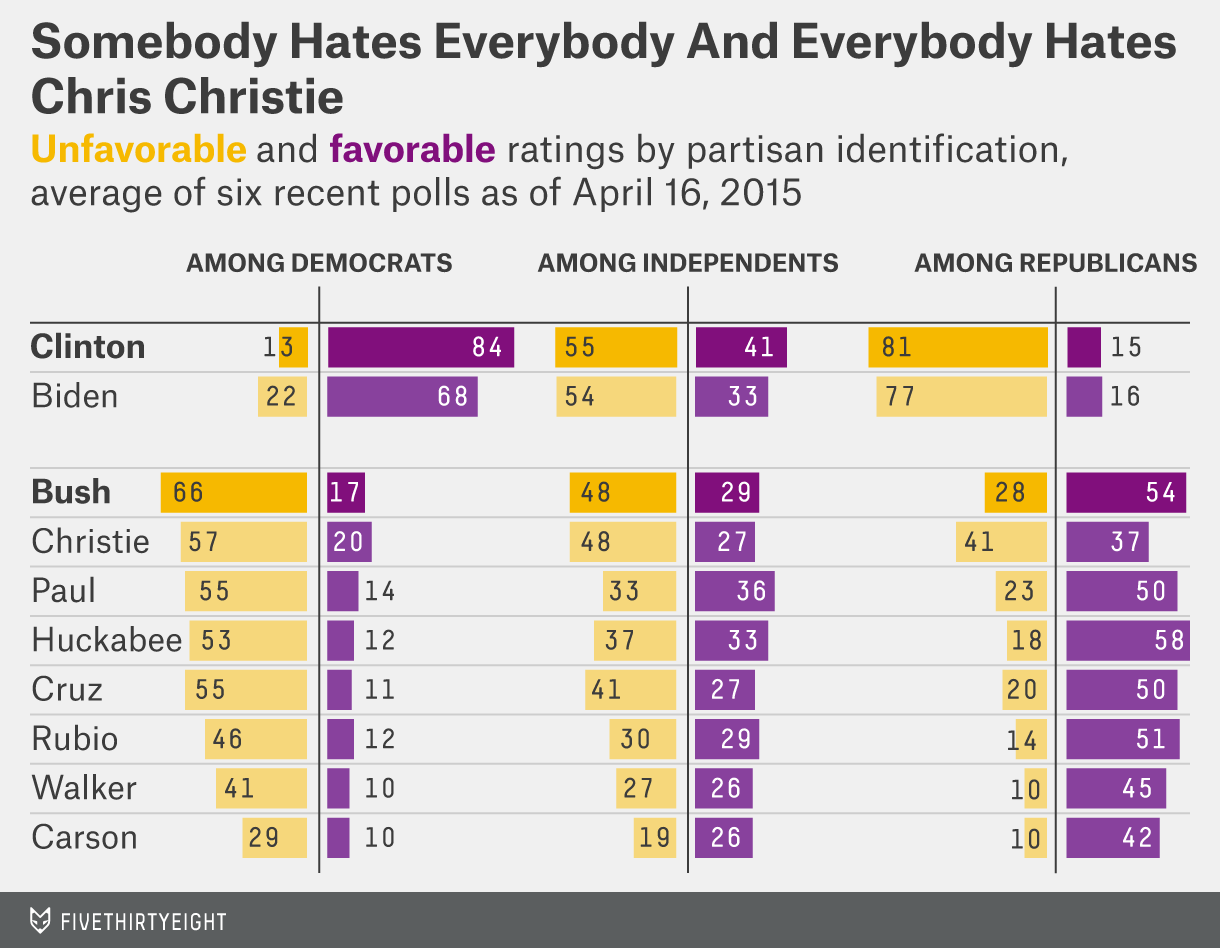 But Republicans can afford to be picky with a deep and talented field of candidates. So one of two things is likely to happen between now and the time the general election race heats up:

Perhaps there are some in-between cases — Bush emerges as the wounded nominee of the Republican Party. Especially in the early stages of the primary, the GOP candidates will be subject to attacks from their competitors, harming their image among some Republicans as they seek to endear themselves to others.

But even then, most Republicans will come around to the nominee at some point between the end of the primaries and the late stages of the general election. They did for Mitt Romney in 2012; he eventually won 93 percent of the GOP vote despite a sometimes bumpy road in the primaries.

But there’s no guarantee that things will stay that way. Bush, who has fairly moderate policy positions, should theoretically be a good fit for moderates in the electorate once they get to know him better. There’s more evidence that candidate ideology matters than that early-stage favorability ratings do.

Or perhaps Bush really is a dud of a candidate. Indeed, we at FiveThirtyEight are mildly bearish on Bush relative to the consensus. If he’s not able to make a good electability case — and his favorability ratings don’t help — Republicans have little reason to pick him ahead of alternatives who are closer to the base ideologically.

But it’s Bush’s nomination chances we’re bearish about — in many ways, the nomination is the tougher hurdle since it’s a multi-candidate race. In analyzing the general election race, it’s only the conditional probabilities that matter. If Bush is good enough to win the primary, he’s probably good enough to give Republicans about a 50-50 shot of winning next November.