In a bit of not-very-surprising news, the Denver Nuggets announced Tuesday that they fired head coach Brian Shaw after fewer than two full seasons at the team’s helm and with a winning percentage below .400.

According to ESPN’s Chris Broussard, Shaw was fired in part because he lost the Nuggets’ locker room. “He really never connected with these guys,” Broussard said in a television interview Tuesday. In an ESPN.com story, Ramona Shelburne reported that Shaw had complained to management about the “maturity and professionalism” of a few of Denver’s players. So certainly Shaw’s relationship with his roster didn’t help his chances of remaining the team’s coach.

But our research has also found that performance relative to expectations is a major determinant of whether an NBA coach can keep his job. And in Shaw’s case, he might have been undone by unrealistic expectations before the start of the season.

Back on Oct. 10, the sportsbook Bovada released its over-under win totals for the 2014-15 NBA season, and Denver was listed with an expectation of 41.5 wins. That wasn’t out of step with other preseason Vegas odds. On Oct. 1, the Westgate casino pegged the Nuggets’ over-under at 40.5 wins. And the online book Bwin listed 44.5 as the team’s over-under in August. The prevailing wisdom of Vegas seemed to call for Denver to finish around .500 this season.

Instead, the team is on pace for about 28 wins — whether you look at our power ratings or Basketball-Reference.com’s season simulator. Our model predicts that such a performance in the face of a 42-win Vegas over-under will get a coach fired about 68 percent of the time. In that light, it seems neither surprising nor unjust that Shaw was given the ax.

But the advanced stats weren’t nearly as high on Denver as Vegas was. Our preseason projections, driven by the same estimates of player talent that fuel our weekly in-season power ratings, looked at the relatively weak supporting cast around Ty Lawson and Danilo Gallinari (including a poor bench) and called for Denver to win only 34 games this season.

You might think there isn’t much difference between undershooting your projections by six games and missing them by 14, but a coach in the former scenario traditionally gets fired only 46 percent of the time. In other words, had Denver’s preseason expectations been more realistic from the get-go, Shaw’s odds of being fired would conceivably have gone from greater than two-thirds to less than one-half. 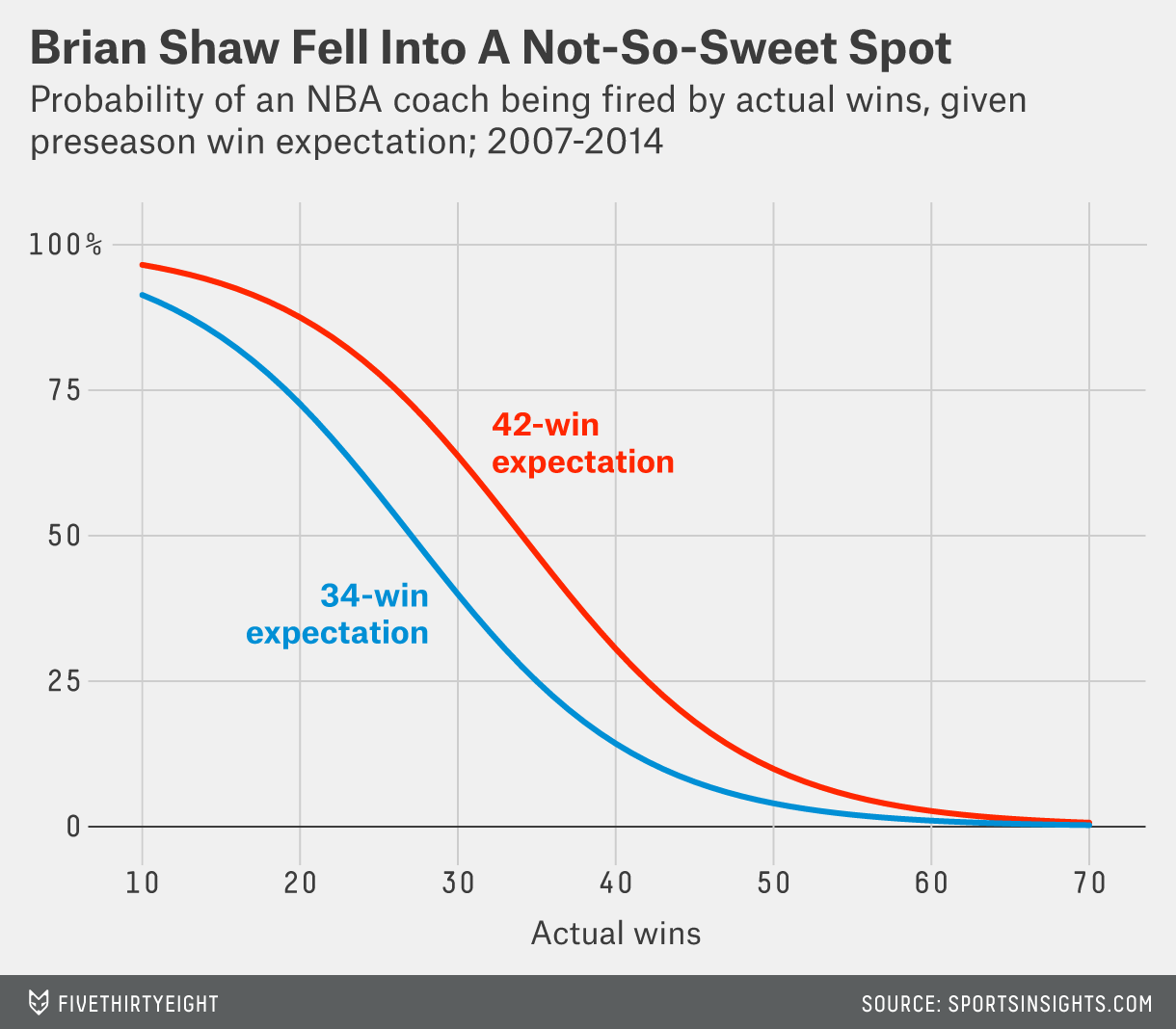 That still would have left Shaw with essentially a coin flip’s chance of being Denver’s coach next season, and it’s also worth noting that the aforementioned locker-room drama probably lowered Shaw’s probability of retaining his job at any given level of underperformance. But the difference between a realistic preseason expectation and an overly optimistic one doubtlessly hurt Shaw as well.