The Houston Astros fired manager Bo Porter on Monday, bringing an end to his two-season tenure with the club.

The move would seem to be an easy call, judging from the Astros’ record under Porter. Among those with at least 300 career games managed, only seven managers in the history of Major League Baseball had a lifetime winning percentage worse than Porter’s .367 mark. But Porter also took over during the worst four-season stretch in the Astros’ history. (His predecessor, Brad Mills, also has the 14th-worst career record of any manager with 300-plus games.) The team won fewer than 60 games in each of the two seasons before Porter arrived in Houston, hitting its nadir with 51 wins in Porter’s first year. But Porter’s Astros were greatly improved this season and are on pace to win about 70 games.

There’s evidence that coaches and managers are fired not on the basis of absolute performance — rather, their employment depends on whether they beat expectations. And by that standard, Porter did a pretty great job this season. Putting aside that much of a manager’s perceived ability to coax good or bad years out of his players is little more than random variation, a 70-win campaign from this Astros team was fairly unexpected.

Before the season, FiveThirtyEight presented projected wins for every MLB team, according to ESPN’s forecasting panel, which uses the wisdom of crowds to make predictions. On average, the panel expected the Astros to win 62.6 games, which was a number in line with sources such as Las Vegas’s over/under win totals. Traditionally, such forecasts have had a standard error of about nine wins in either direction, so the Astros would have only had about a 21 percent chance of winning 70 or more games this year. They essentially had a season in the 79th percentile of all possible expected outcomes, which ranks sixth in all of baseball. 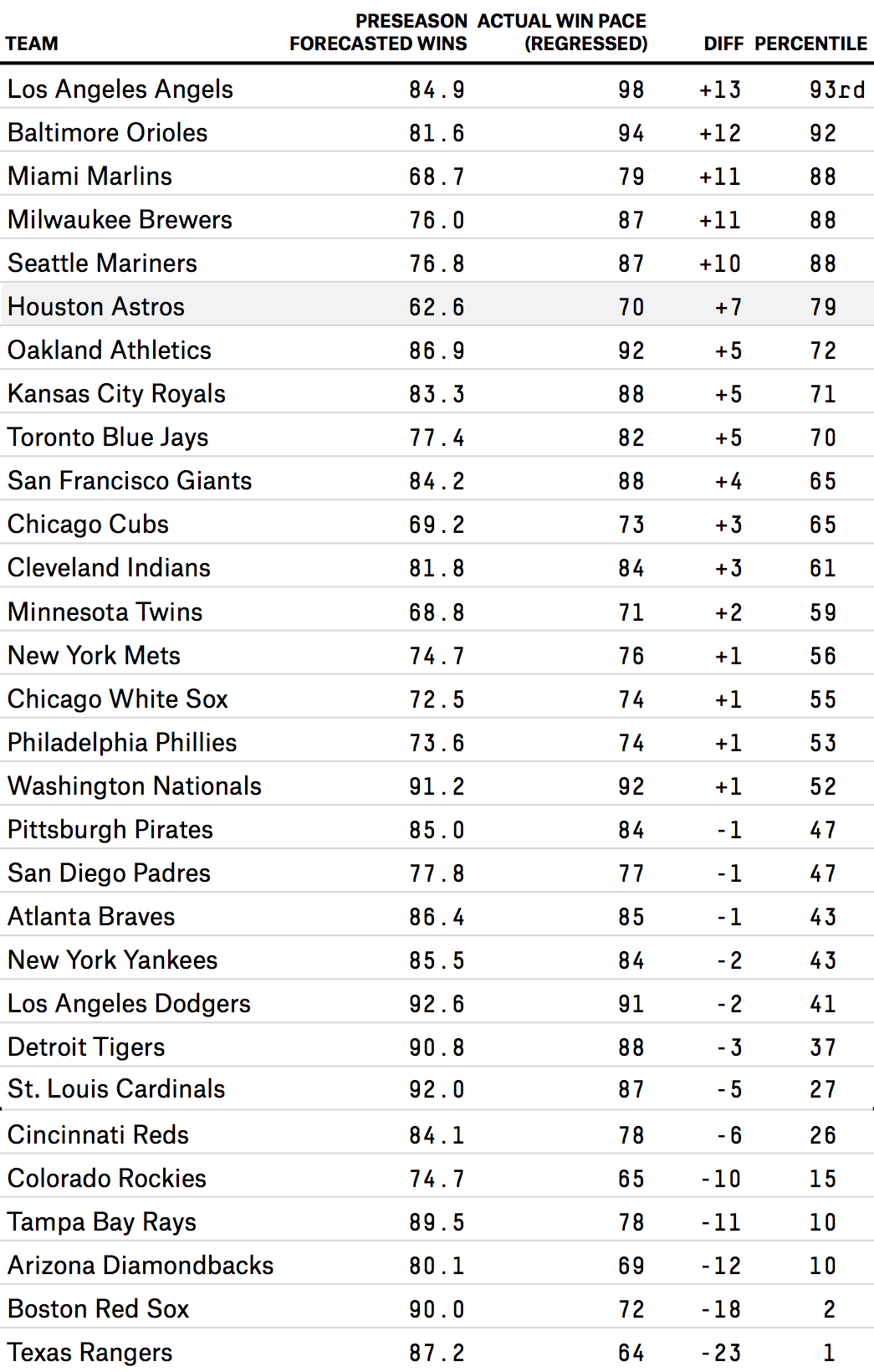 There are, of course, other factors that can determine a manager’s continued employment beyond outperforming expectations. ESPN’s David Schoenfield suggests that Porter was always just a placeholder during the Astros’ prolonged rebuilding process, destined to be cast aside when the team was ready to move out of MLB’s basement. (There have also been reports of philosophical differences between Porter and the team’s front office.) But if he is to be judged on what the Astros accomplished this year — both relative to preseason expectations and where the franchise had been over the previous three seasons — Porter should have been commended, not fired.

CORRECTION (Sept. 2, 12:24 p.m.): A previous version of this article listed the projected wins for every team based on regressed winning percentages but didn’t take into account “banked” wins that teams had already earned.