The gender gap in wages and outcomes in the U.S. workforce is well-known, but I’m also interested in how the workforce is reflected in popular culture. On Tuesday, for instance, I looked at several occupations — some historically gendered, others considered prestigious or high-paying — to see how big a gender gap exists in movies (it’s big).

Several folks wrote to me to suggest that it would be worth comparing the big-screen gender breakdowns to the real U.S. workforce’s. So that’s what I did.

The short of it? For every single career that the Bureau of Labor Statistics had data for, women were underrepresented on screen.1 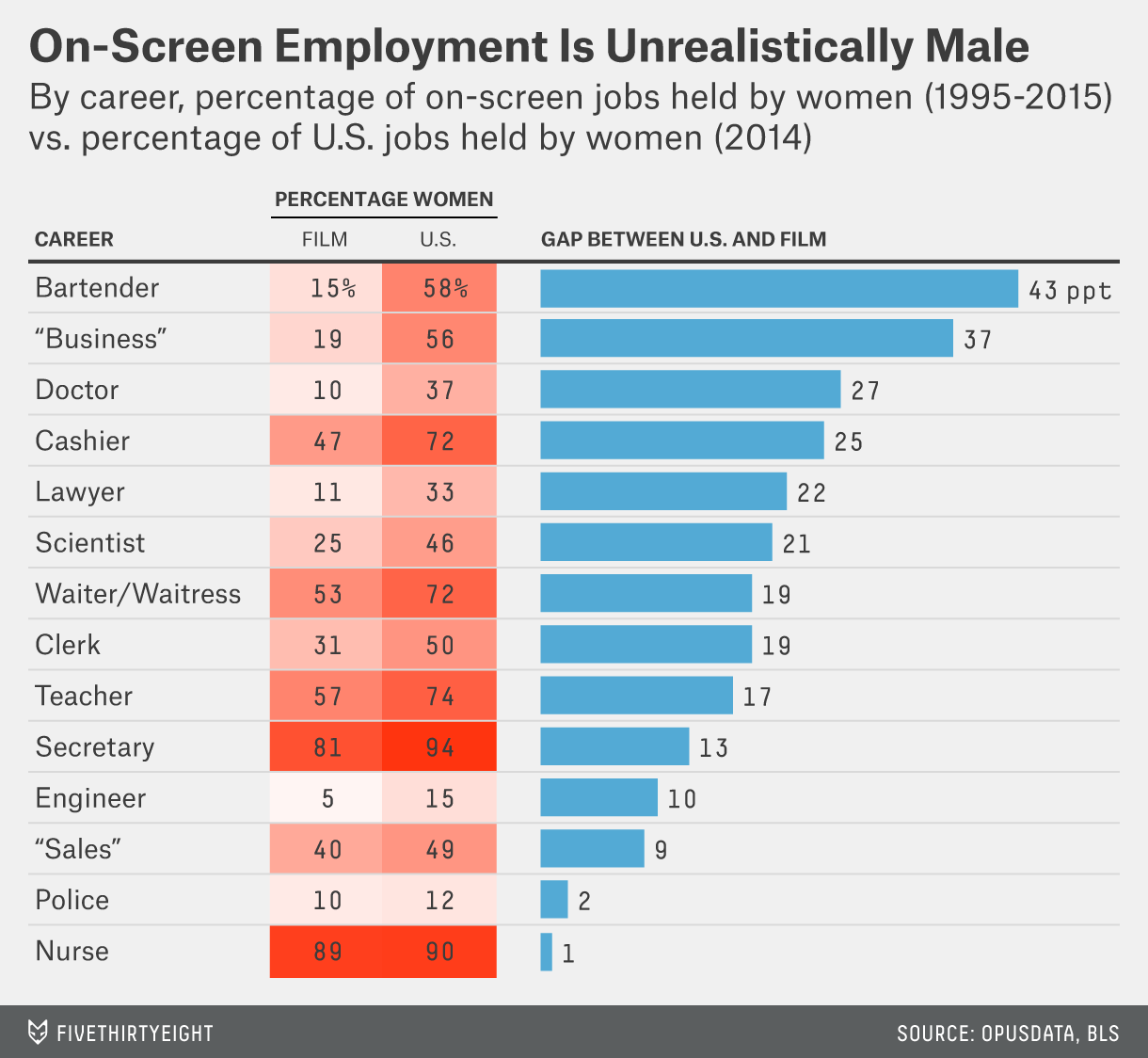 Bartenders are the most disproportionately represented in films. Although about 58 percent of bartenders in the real world are women, only 15 percent are women in movies since 1995, according to OpusData, which tracks screen credits.

Next up are business professionals and physicians. For each category, women are dramatically underrepresented on screen.

There were several careers I looked at for which there isn’t BLS data, such as “aide,” “narrator” and “official.” I originally wanted to include “soldier” in this analysis but decided against it. We can get data on the military, but I don’t think the available modern data is ideal here. Films about war tend to be era-spanning — “Saving Private Ryan,” “Inglourious Basterds,” etc. — and the U.S. military was vastly male for most of its history. So, yeah, the modern U.S. military is more diverse than what we’re seeing on screen, but I doubt that every character described as “soldier” in a movie credit since 1995 was necessarily in the modern U.S. force.2

Screenwriters often give a character the title “Dr.” — be they an M.D. or Ph.D. — as an easy way to say that a supporting character is smart without having to show it. That’s totally fine, but only 25 percent of characters with “Dr.” in front of their names were women. In the real world, 37 percent of Americans with a doctorate are women, according to the U.S. Census Bureau’s 2014 Current Population Survey.

What’s causing this? My colleague Carl Bialik’s idea is that perhaps if a field has a reputation for being slightly more male than female, the people who make movies just go with a man, and the gender breakdown becomes lopsided.

This hypothesis seems sensible, and campaigns like “Just Add 5” — which tries to improve gender parity by incrementally increasing the number of women in supporting roles in films — seem to back it up as well.

The moral of the story? We saw on Tuesday that when Hollywood depicts a prestigious occupation or a job that requires substantial post-secondary education, it usually goes with a man. And while the same is often true in the real world, it kind of sucks that movies are even worse.